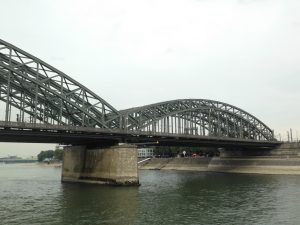 It’s another travel catch-up, from September 2016!

Back in 2014, I used the (now sadly withdrawn) DB night train from Berlin to Paris, an experience so exquisite that I managed to get a blog post and a YouTube video out of it.

Two years on, September 2016, and I felt Berlin calling to me again. It was time to repeat the experience in the other direction. The sleeper is no more, but there are still plenty of high speed trains zooming across the Continent. It was time to sample some of that action.

European train travel offers a myriad of high speed train options, each with their own fare structure. Sorting out your ICEs from your Thalyses can be a tricky business. Fortunately I was armed with knowledge from the Man in Seat 61, a one-man treasure trove of information about such things. His website should be the first stop for anyone planning a similar voyage. 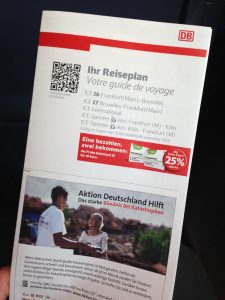 For travel to Germany, however, booking is quite simple. Just go to DB’s website, Bahn.com, and enter your journey details. The 10.58 Eurostar gives a convenient connection at Brussels, and is also a good departure time for people like me, who need to travel from the provinces.

END_OF_DOCUMENT_TOKEN_TO_BE_REPLACED 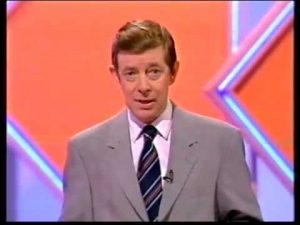 END_OF_DOCUMENT_TOKEN_TO_BE_REPLACED

It was 20 years ago today that I made my first foray into the world of web publishing.

I was 14, and had taught myself HTML from a series of articles that appeared in Acorn User magazine. AU had also given away a CD-ROM packed with internet software for Acorn computers, including an early web browser called ArcWeb. With that, and the Zap text editor, my journey into the wonderful world of web design began.

A minor detail like not having an internet connection didn’t stop me from putting together a basic website. I was perfectly happy browsing files on my 210 megabyte hard disc. I couldn’t put anything online, however, until the end of August 1997, when I got a 33k6 modem and a dial-up account with ArgoNet. On 31st August 1997, while the rest of the world was mourning Princess Diana, I was busy uploading my first website.

FABland (there’s a long story behind that name, and don’t ask me to tell it) was mainly a repository for some little freeware programs I had written and wanted to share, together with some terrible jokes I had stolen from the Internet. However, I also had a “my viewpoint” page, which I updated occasionally. Yes, I still have those writings archived, and no, you can’t see them because they are mostly embarrassing sub-Adrian Mole teenage angst and some really bad opinions. That was the first time I exposed myself online (not that anyone was reading).

Two decades have passed. Acorn has disappeared into the annals of computing history and I have swapped my RiscPC 600 for an Apple iMac. I’m an anxious adult instead of an anxious teenager. So why am I talking about my first website now? Because I want to explain why I have chosen this seemingly random date to trumpet my return to the blogosphere.

I ended my old blog in December 2015 because I had limited time to devote to writing. When I did have a moment to write something, it felt like a chore. The former condition still applies for the moment, but the latter doesn’t. I can’t say I’m terribly sorry to have missed 2016, the year when all hope died, but more recently there have been times when I’ve been itching to write something long-form – threading fifty tweets simply won’t do.

I thought about picking up on my old blog as if nothing had happened. However, I’ve decided to go for a completely fresh start and a slightly different focus. The old site will remain online as an archive, but all new stuff will go here, the third incarnation of my online presence.

Over the previous 20 months, an awful lot has happened (emphasis on awful), so I’m looking forward to catching up with you all. Follow me on Twitter to make sure you don’t miss anything. If you’re old school, subscribe to my RSS feed. I am also on Instagram and Tumblr.

* This site is not best viewed with ArcWeb.