Our afternoon in Copenhagen started the traditional way… with a McDonald’s. We meandered through the city centre, looking for somewhere to eat a late lunch, and sort of ended up there as the default option. Still, the McChicken Sandwich was very nice.

We also got to see a bit of Copenhagen city centre. It’s a stereotype that the Nordic countries are universally clean, tidy and pretty, and Copenhagen lives up to that reputation perfectly. 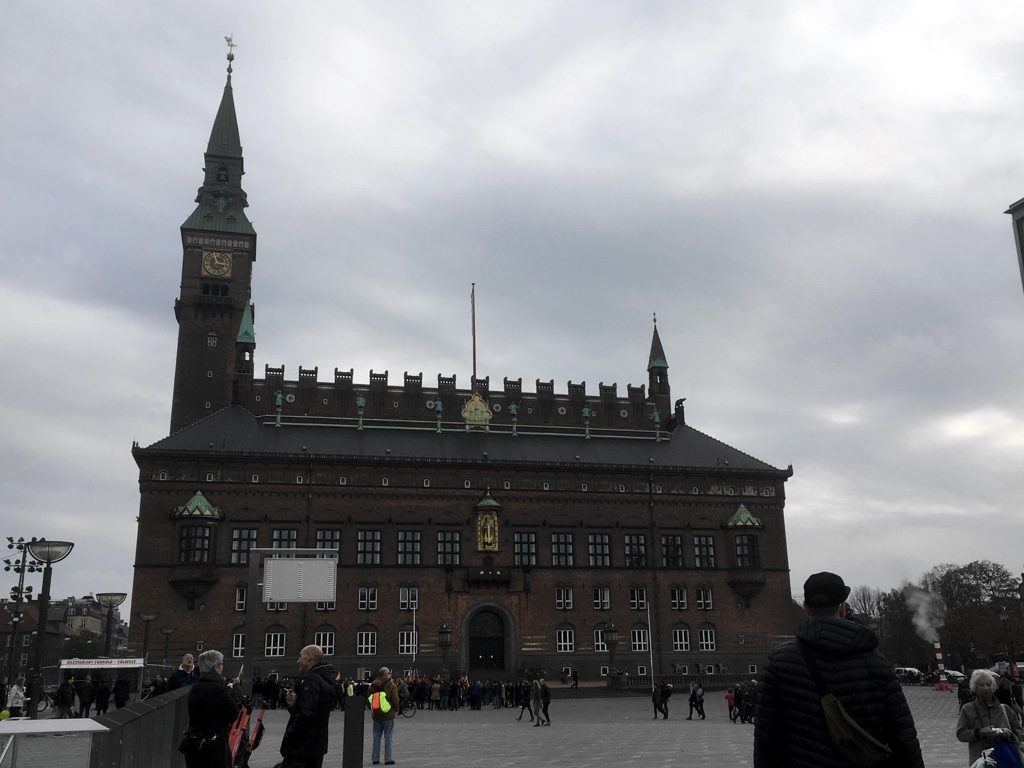 One problem with the walk through town was that we had travelled in an almost straight line away from our hotel. Still, this gave us all the excuse we needed to descend into the Copenhagen Metro to find our way back. We headed to Kongens Nytorv station for the short ride back to Copenhagen Central.

Copenhagen’s Metro is, by world metro standards, still brand new. The first two lines opened in 2002, and the line we were about to travel on, the M3, still had that new train smell, having opened just a few weeks earlier, on 29 September.

The locals were all tapping in and out on smartcard validators. Pretty much everyone in Denmark uses Rejsekort, a nationwide smart card system that can be used on bus, train and metro services. Imagine if the Walrus card covered a whole country… and had been implemented competently.

With no immediately obvious way to obtain a card, tourists like Paul and myself were at a bit of a disadvantage. We were not entirely forgotten, however – a paper ticket vending machine was tucked in a corner of the station concourse. Unfortunately it only accepted coins or credit cards, so the wad of 50 krone notes in my wallet was useless. Paul confidently strode up to the machine and attempted to purchase a Copenhagen CityPass for 80 kr. He inserted his Monzo card into the slot… and the machine promptly crashed. It completely froze up, would not respond to any button presses, and worse still, the card slot had “locked” and refused to release Paul’s card. Mads was promptly dispatched to find a member of station staff, who – after some difficulty and an extended conversation into a walkie-talkie – was able to reboot the machine.

Rather than wait for the machine to complete its reboot cycle, Mads used his Rejsekort to pay for the three of us to travel. It’s just occurred to me that we never actually reimbursed Mads for the cost of this journey, but I like to think having our sparkling company was reward enough (this is probably not true).

One notable feature of the Metro is that it is completely automated. We have this in the UK to a certain extent on the Docklands Light Railway in London, but here there are NO staff on board at all. The best thing about this is that you have an unobstructed view out of the front or rear windows. On the M3 (which is 100% underground) all you get to see is the tunnel, but even this is an impressive sight, especially when you suddenly emerge from the single-bore into a massive crossover cavern. 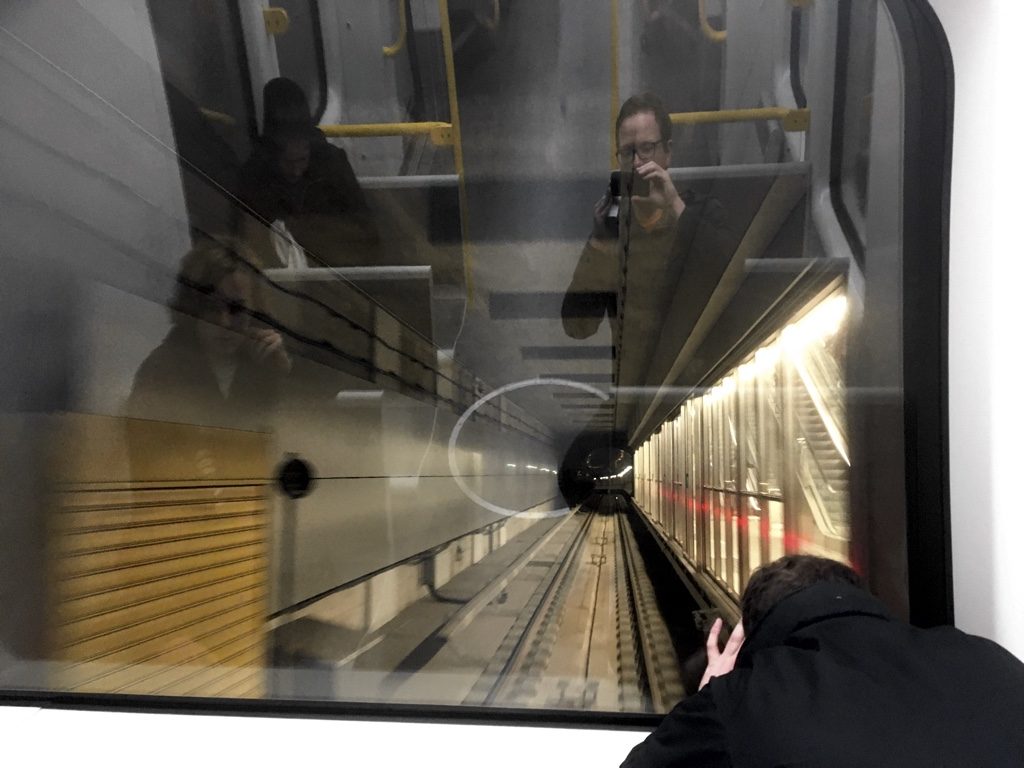 (I didn’t actually take too many Metro photos on the Sunday, but I made up for that over the next couple of days)

We travelled back to Copenhagen Central and quickly located our hotel. Check-in formalities completed, we headed back to the station, intending to see some of the city sights before it got dark. This time we used a DSB ticket machine rather than the Metro, which worked perfectly, although Paul for some reason was VERY insistent that I go first with my card. 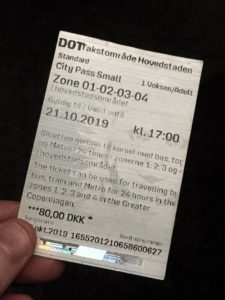 Another short Metro ride took us to Marmorkirken station. Many of the stations are quite deep underground, with a zig-zag arrangement of escalators to get people to and from street level. This offers numerous opportunities to attempt arty shots like these: 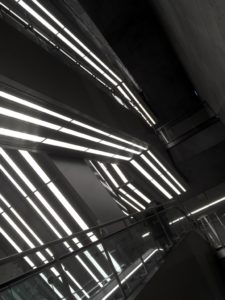 Marmorkirken means “Marble Church” and refers to the nearby Frederik’s Church, an impressive structure with a 31m dome. 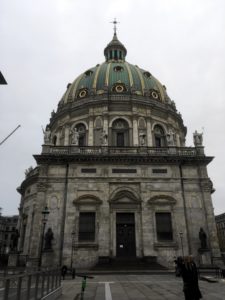 And just down the street from the church is Amalienborg Palace. The symmetry here, with the gap between the two sides of the palace framing the Church dome, was so perfect that it must surely be deliberate design. 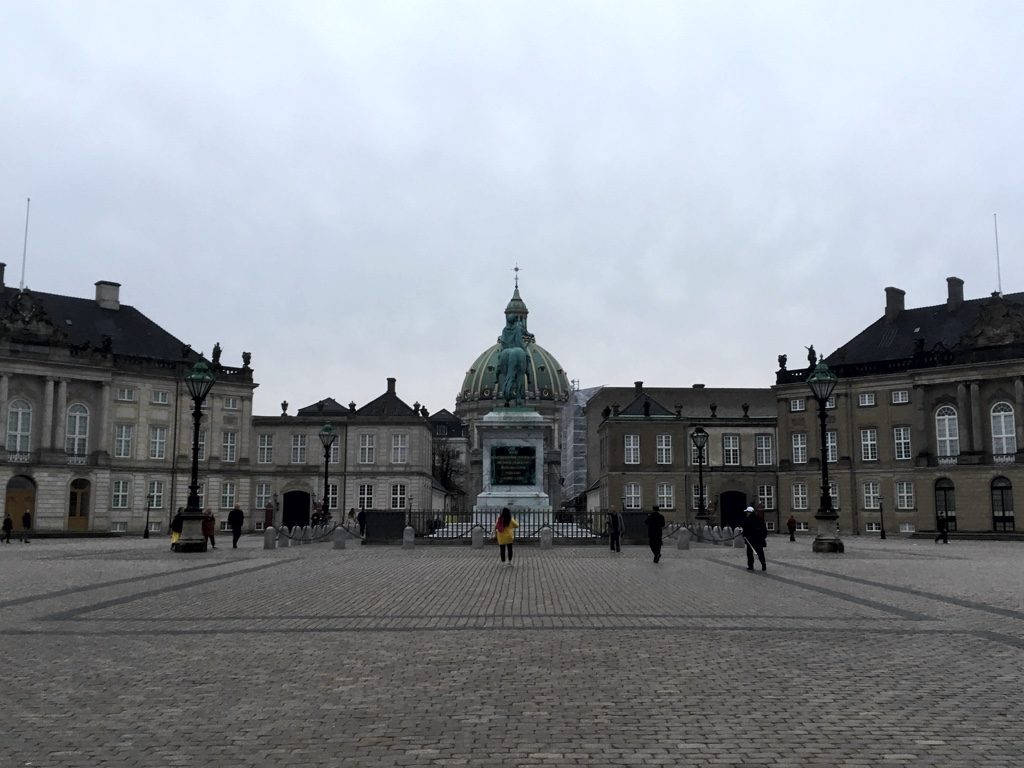 This is the official residence of the Danish Royal Family. In stark contrast to Britain, where Her Maj’ hides away in Buckingham Palace behind tall fences emblazoned with warnings about the Terrorism Act, Copenhagen’s palace is in a public square which you are free to meander about at leisure.

I still wouldn’t risk messing with any of the Palace Guards, though. 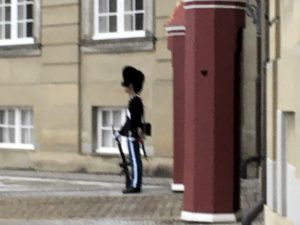 We continued to the harbour and strolled along the Langeline Promenade, hoping to reach the famous Little Mermaid statue before it got dark. We passed the building of the Royal Cast Collection, an art gallery containing multiple plaster casts of classical sculptures. A replica of Michelangelo’s David was erected outside. 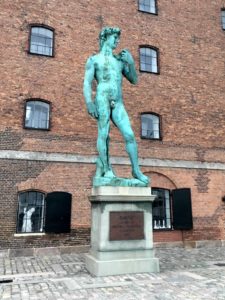 A little further along the shore, and after Mads paused a couple of times to make sure we were walking in the right direction, we found the statue. Just in time, too, as the light was rapidly fading. Even as dusk approached, there were still plenty of tourists all vying for the perfect shot, but finally a gap in the crowd opened up and I got my own photo. 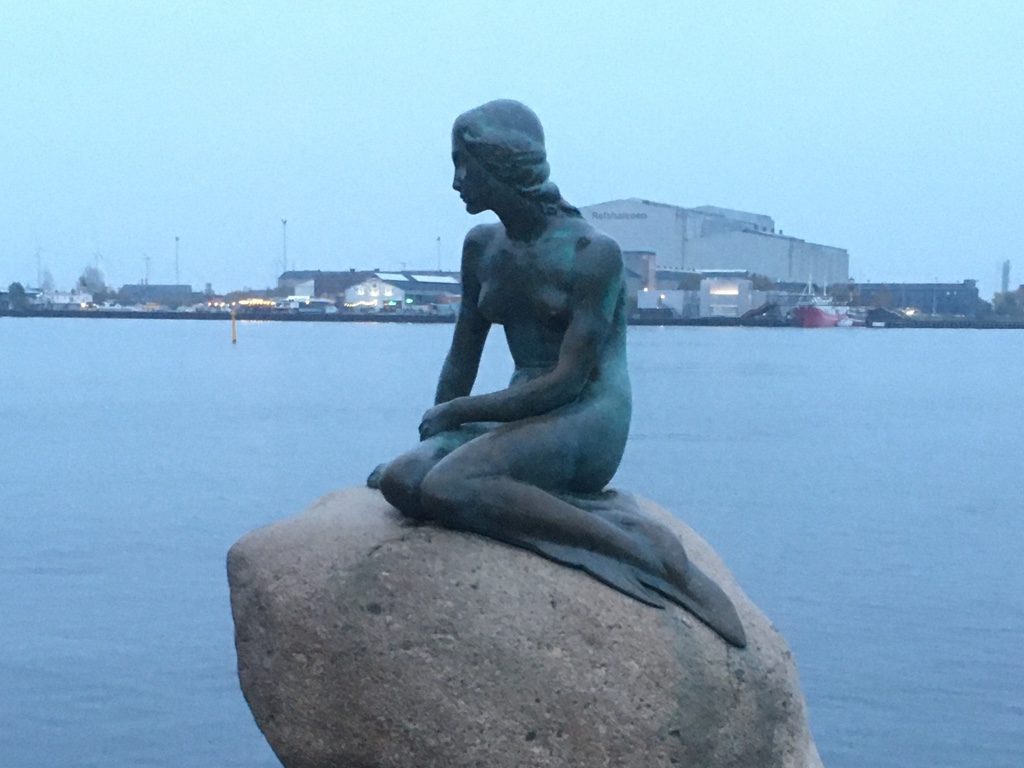 The statue commemorates the Danish author of the original Little Mermaid tale, Hans Christian Andersen. Since its unveiling in 1913, the statue has become something of a symbol of Copenhagen, despite being vandalised on numerous occasions. It has been decapitated, had its arms sawn off, paint thrown over it and on one occasion knocked off its base with explosives.

Disney’s version of the story deviates significantly from Andersen’s version, but I couldn’t help it: I started singing “Under the Sea” to myself. Unfortunately, I couldn’t remember the proper lyrics, only the parody version they did on The Simpsons (“There’ll be no accusations / Just friendly crustaceans / Under the seaaaa!”) – but I think that was close enough.

Walking away from the statue, we witnessed a spectacular sunset, which sadly the camera in my iPhone SE couldn’t really do justice to. 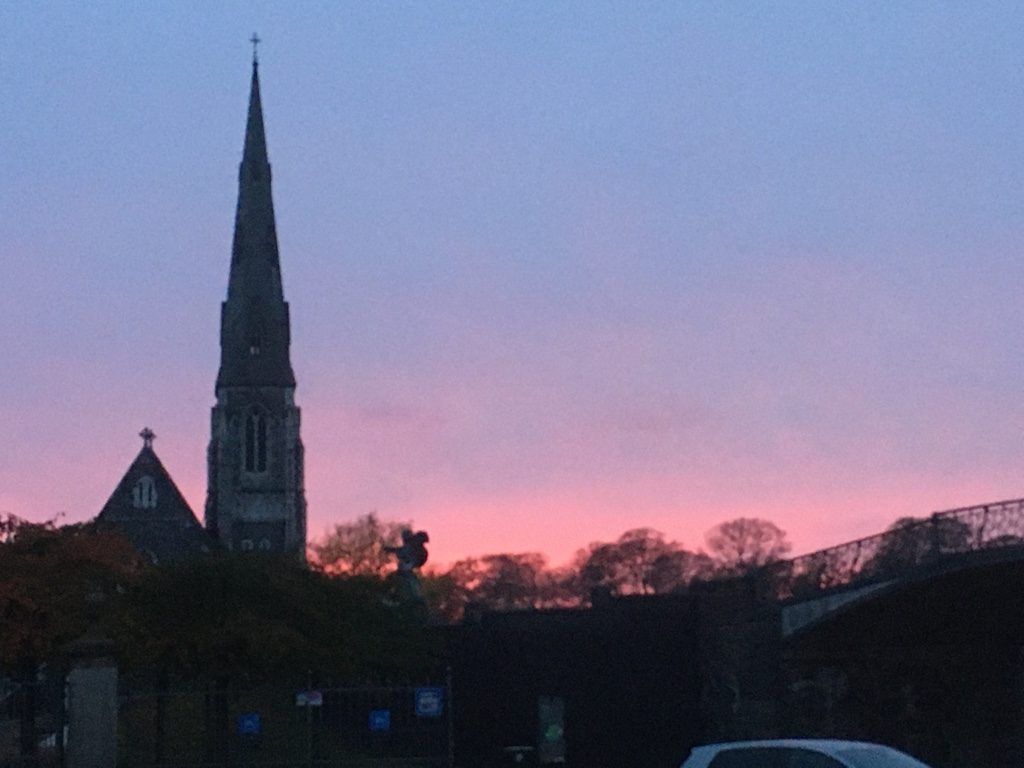 Rather than retrace our steps, we opted to take the harbour bus. These ferry services are fully integrated into Copenhagen’s transport network, providing useful links around the sprawling harbour area. I thought of Liverpool’s Mersey Ferries and pondered why our own city, with its famous river, seems unable to run a proper ferry service for commuters (as opposed to cruises for tourists).

As night falls on Copenhagen, the water bus arrives to take us back to the Metro. ^PK#TågFärjetur pic.twitter.com/SmysszQoio

We alighted at Nyhavn, the waterside district famous for its 18th century buildings which house many bars and restaurants. We walked past eateries of every type, most of which were very busy.

Discussion turned to where we could go to get some dinner. Some swift Googling found Oscar Bar and Cafė, which was a bit of a walk from our current location, but looked (from the website at least) to be fairly cosy, gay-friendly and reasonably priced.

We found the bar located down a side street and ordered some food. Mads ordered a plate of nachos that was easily enough to feed two. I opted for a club sandwich, while Paul went for a Croque Madame.

I am aware of rumours circulating that @NotANorwegian and I are no longer talking after I criticised his tour guiding skills. pic.twitter.com/0ARjh7lPGZ

Denmark has a concept of Hygge – “a mood of coziness and comfortable conviviality with feelings of wellness and contentment,” according to Wikipedia. It became a fad in English-speaking countries a few years ago, with articles appearing everywhere, from the BBC to Elle Magazine.

But it was only here, in the birthplace of Hygge, that I finally understood what it was all about. In this cosy bar, enjoying good conversation with great people, I felt relaxed, I felt content, I felt happy. It may have been partially because of the strong Belgian beer I was downing, but not entirely.

Thinking of the LGBT social spaces that exist in the UK – mostly, extremely noisy, crowded gay bars where you have to shout to be heard – I couldn’t help but feel that the British gay scene could do with a bit more Hygge of its own.