Our previous hotels had the arrangement with a double bed that can be pulled slightly apart to make two single beds (that six inch gap instantly removing any suggestion of sexual intimacy).

Our Copenhagen hotel, however, had a double bed with a bunk bed precariously above. Paul immediately volunteered to be on the bottom, leaving me to clamber up to the bunk – which had NO railings to prevent falling out should I toss during the night. 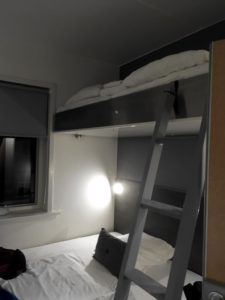 It only occurred to me later that this arrangement was probably intended for a small child, with parents in the double bed below. Thankfully, the bed was still able to support my not insignificant weight – I doubt Paul would have appreciated me on top of him.

Thankfully there were no incidents during the night, and we awoke on Monday refreshed and ready to go. The plan for the day was to cross the Øresund Bridge into Sweden and visit Malmö. Before that, though, we decided to spend a little more time on the Copenhagen Metro. 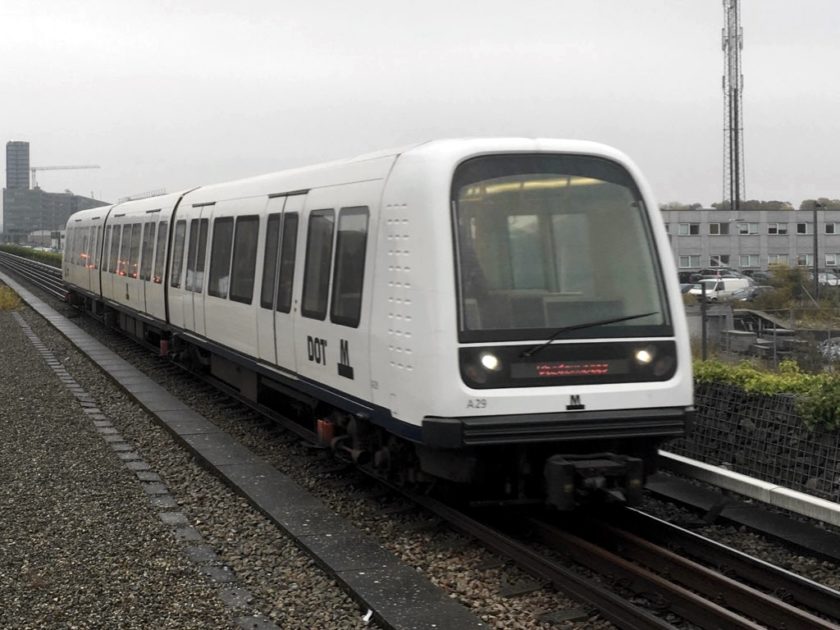 The Metro has three lines. The M1 and M2 share tracks from Vanløse to Christianshavn before splitting, with the M1 continuing to Vestamager and the M2 to Copenhagen Airport. The M3 is a completely separate circular line. A fourth line, the M4, is under construction and is expected to open in stages, with phase one opening next year and the full length opening in 2024. 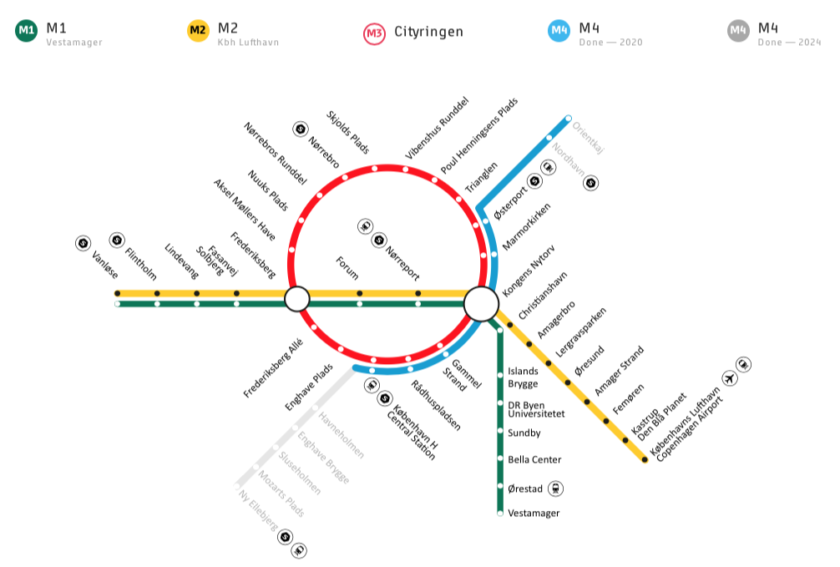 First we rode out towards Vanløse, the shared terminus of the M1 and M2. We were in tunnel until Fasanvej, but shortly after burst out into the open for the final stretch. 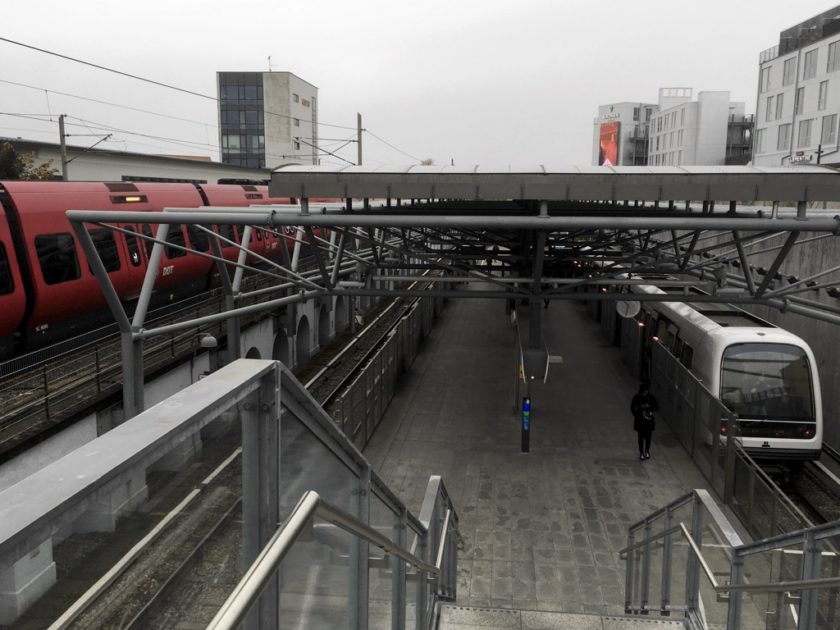 Vanløse is a functional station, with interchange possible between the Metro and DSB’s S-tog from an adjacent platform. We were out in the suburbs, far from the touristy areas, and there wasn’t much to see. No offence Vanløse, but we didn’t stick around for too long.

We retraced our steps on the M1, riding all the way to the other end of the line at Vestamager. 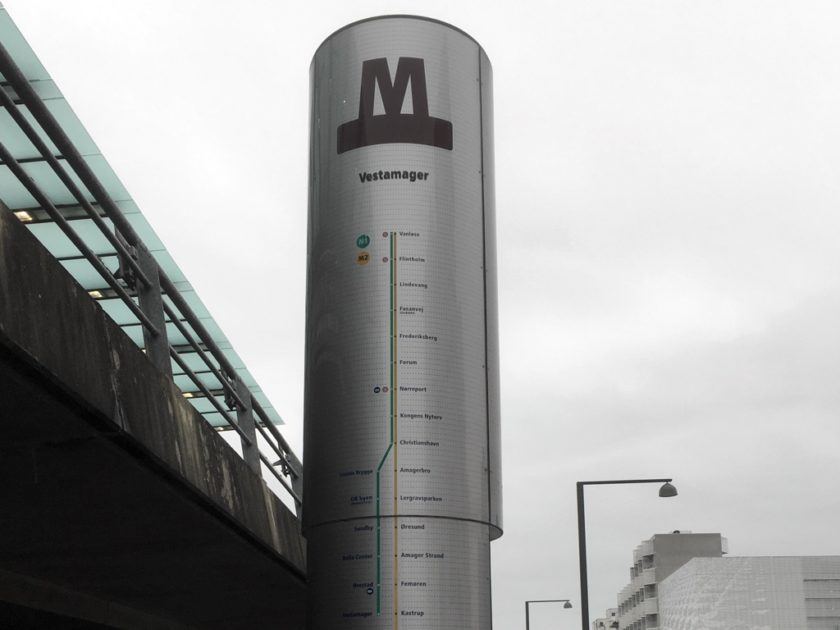 The southern end of the line lies in a redevelopment area, with the Metro intended to support that regeneration, and new residential and office buildings was all around us. Also nearby was the main depot and control centre for the Metro system. 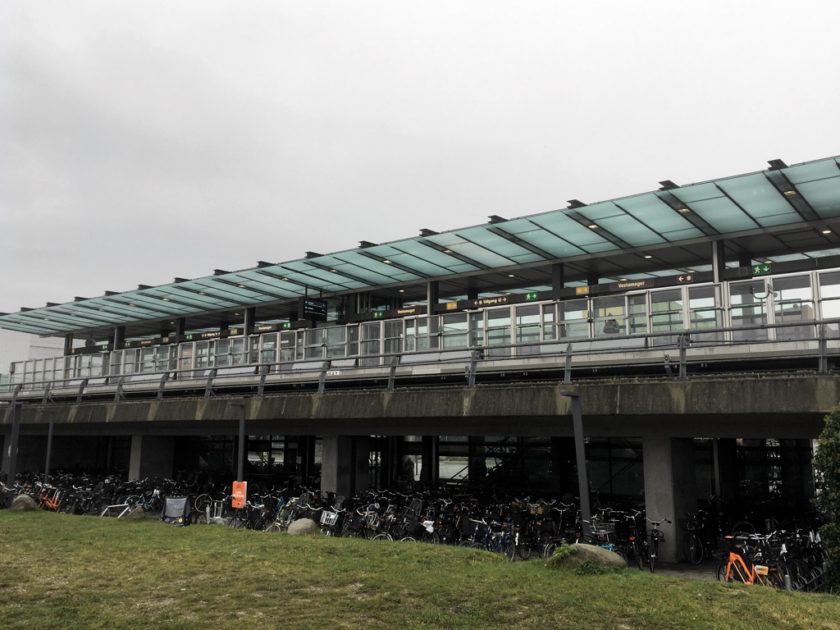 And bikes. Hundreds of bikes. 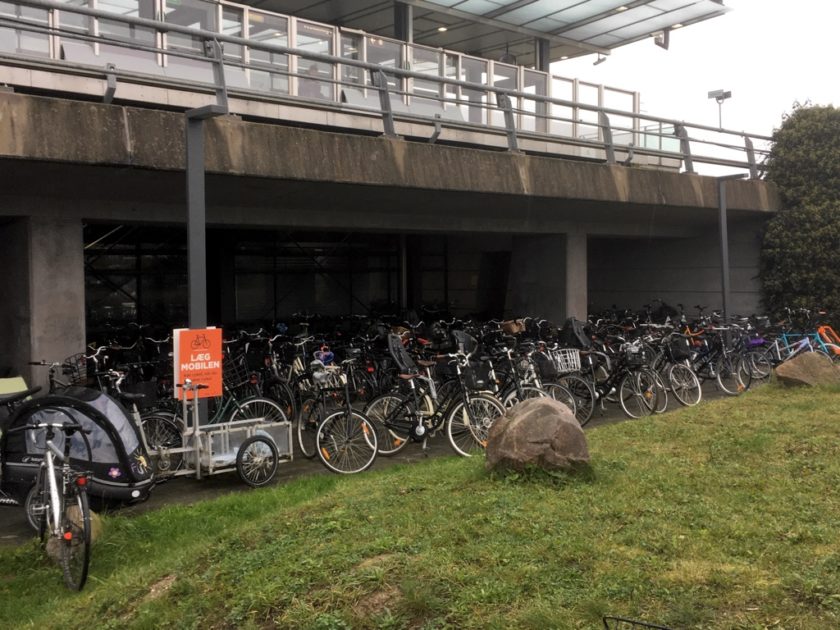 Returning to the city centre, where it was time to move on to the main event – a trip to Malmö. This would involve travelling on the Øresundståg, a passenger train network which covers the , centred on the Øresund Bridge, a 5 mile long engineering wonder which provides road and rail connections between Sweden and Denmark.

At Copenhagen Central, some fiddling with the ticket machines produced… this. Sorry, Skånetrafiken, your tickets are very disappointing. For a moment, I honestly thought the machine had printed out a credit card receipt and neglected to print the ticket itself. I will never complain about the “bog roll” tickets on UK railways again. 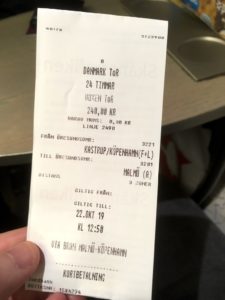 The train itself was similar to the one we had used from Hamburg the previous day, albeit an electric version. For someone more used to Northern Rail’s cramped carriages, this was sheer luxury for what is really a regional train service, even if it does cross an international border. 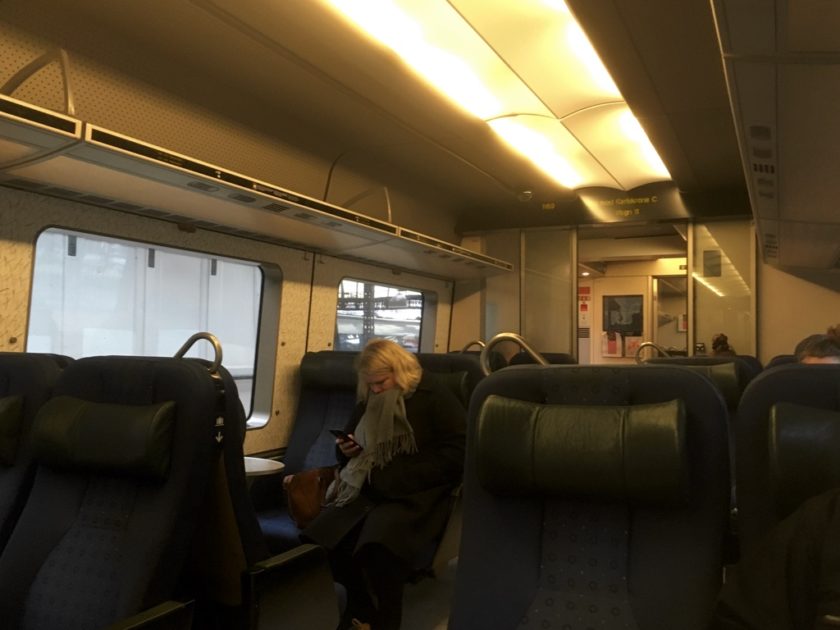 Crossing the Øresund Strait itself is something to marvel at. First the train plunges into the 4km long Drogden tunnel. Then you emerge onto an artificial island, Peberholm, 4 kilometres long by 500 metres wide. Incidentally, Wikipedia tells me that the Danes chose the name Peperholm (“Pepper Island”) to match the nearby natural island, Saltholm, which is just adorable.

We then continued onto the bridge itself. The Øresund Bridge is perhaps most familiar to British people through the imaginatively-titled detective series The Bridge, where a murder takes place on the bridge itself. Thankfully, nothing like that happened on our journey, and four murder-free minutes later, we were in Sweden.

Across the Oresund bridge, four minutes later we are in Sweden. #TågFärjetur pic.twitter.com/I89GHbqHuq 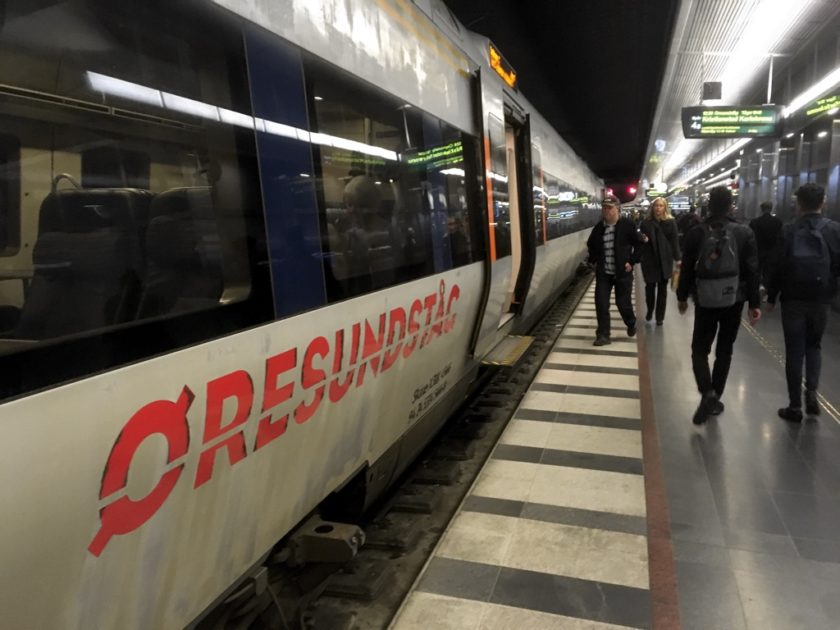 Arriving at Hyllie station, the first stop in Sweden, we were fully prepared for passport checks. The Schnengen Agreement was supposed to do away with such things, but thanks to paranoia concerns about illegal immigrants, they have been reintroduced here too.

Or at least, that was the theory. Our train stopped for a long time at the platform, then departed with not a scary policeman in sight. I COULD HAVE BEEN A PEOPLE SMUGGLER WHY DIDN’T YOU DO ANYTHING SWEDISH POLICE?!

After a brief stop at the pleasingly-named Triangeln station, we pulled into Malmö Central. These new underground platforms were opened in 2010. Prior to this, trains coming in from Denmark had to use the original high-level platforms and reverse. 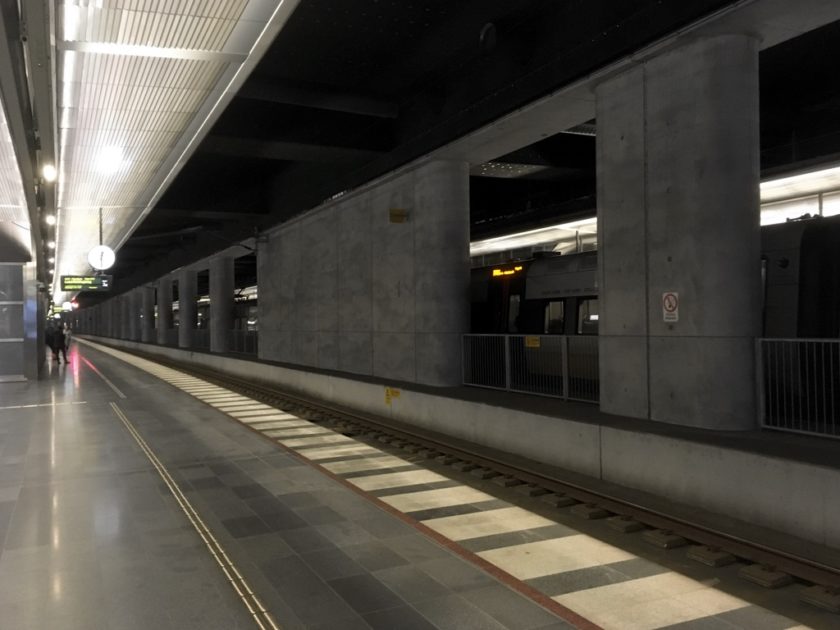 The original high-level platforms are still in place, although not as intensively as they used to be. I did see an express train to Stockholm being prepared, and I later learned that during the summer there is a sleeper train to Berlin (and that is another trip idea!)

In summary, Malmö station was a delight, but that was a mere appetiser for what we saw when we stepped outside.

The statistics show that the Nordic countries have a supremely high quality of life, and looking around it wasn’t hard to believe it. Pretty buildings, clean streets, and everyone seemed so… relaxed.

We didn’t really have a plan for the day, so we started off by strolling through the city centre, exploring generally, but also to find somewhere to eat lunch. We ended up in VESPA, an Italian restaurant. Any regret I felt at not sampling any Scandi cuisine quickly evaporated when the waiter delivered the biggest Calzone I’d seen in a long time. My Coke seemed to arrive in a jam jar with a handle, but we can let little things like that slide.

Continuing to wander, we walked through what we initially thought was a park but actually was one of Malmö’s old cemeteries. Because what visit to a city is complete without wandering amongst gravestones? 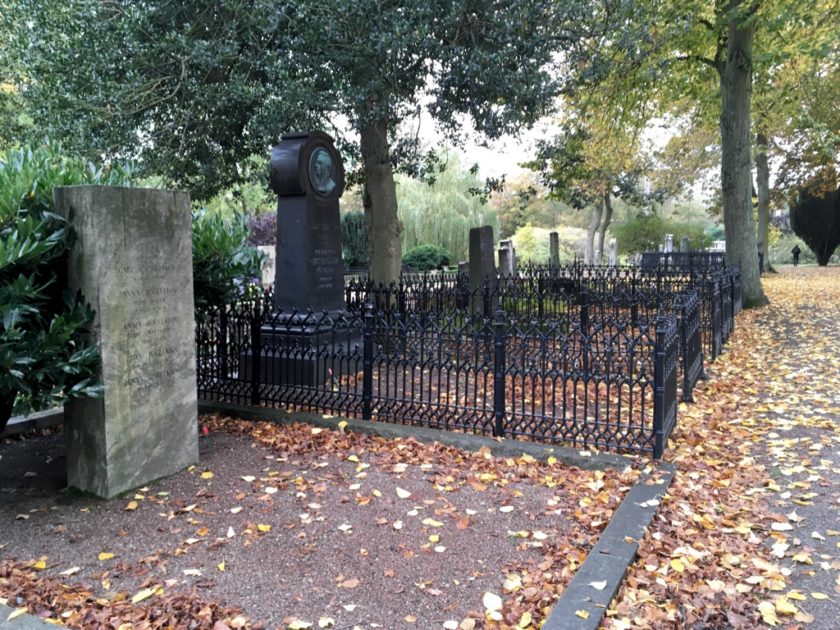 Leaving the cemetery, I spied a public toilet nearby, I popped in to make use of the facilities. Not having a penny of Swedish currency on me, I had to pay the 10 Krone fee with my debit card. That works out to roughly 80p, but if this seems a bit excessive, bear in mind that my cubicle had a maximum stay of 20 minutes and contained not only a toilet, but a shower too. Paul was waiting outside, so I decided against taking a shower, even though that would have given good value for money. 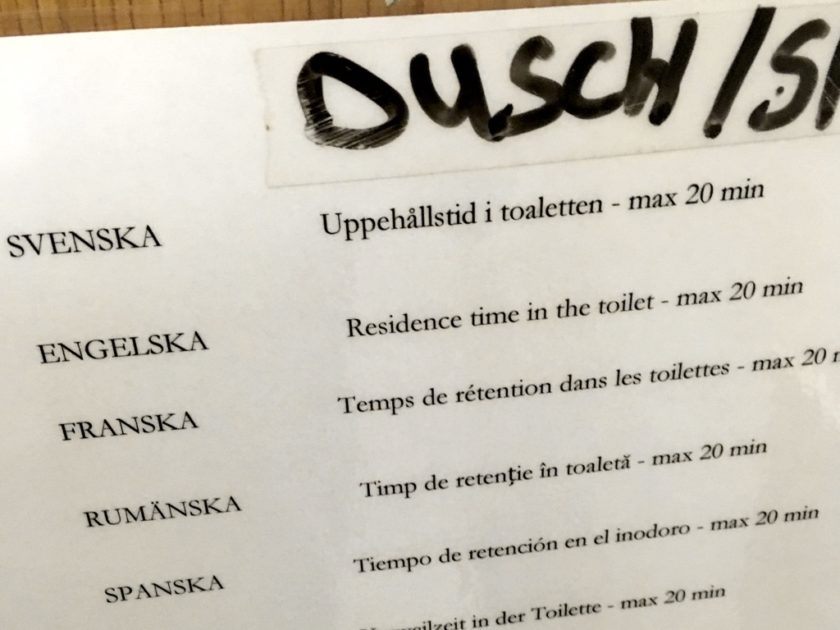 Retracing our steps back to the station, we briefly took in the old harbour area, home to the Maritime University among other sights. Grand old brick buildings nestled alongside towering glass and steel edifices.

There was a smattering of public artwork, too. Paul seemed very enamoured with these little concrete trains, for some reason. 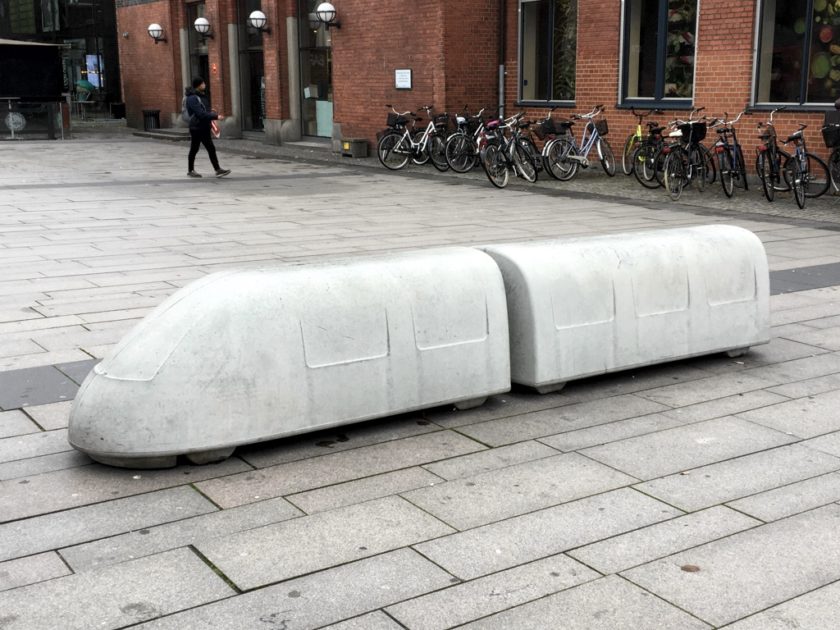 Paul wanted to see Malmö Arena, venue for the 2013 Eurovision Song Contest, so we took the train back to Hyllie. This whole area, on the outskirts of the city, had been newly constructed off the back of the Øresund link, with new office buildings and a giant shopping mall. 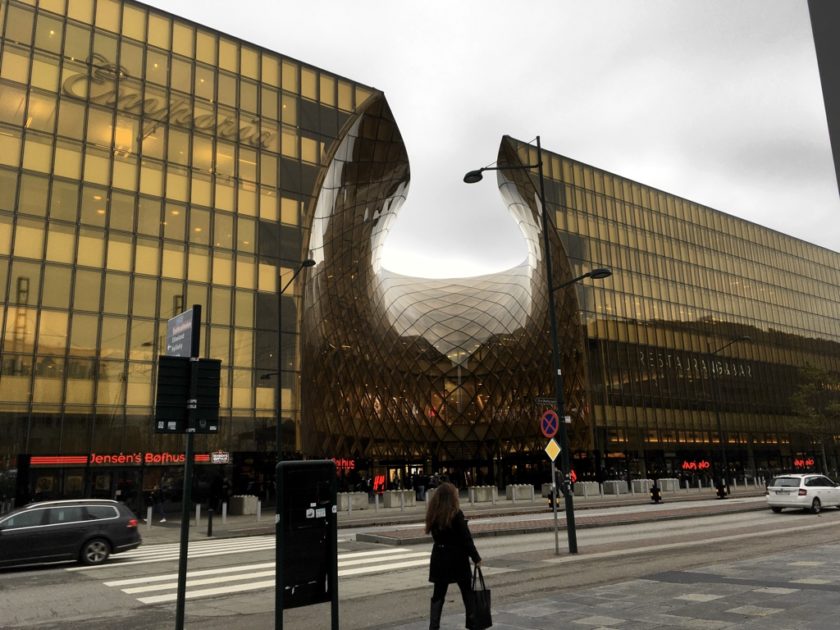 In the distance, the Øresund Bridge itself dominated the horizon. 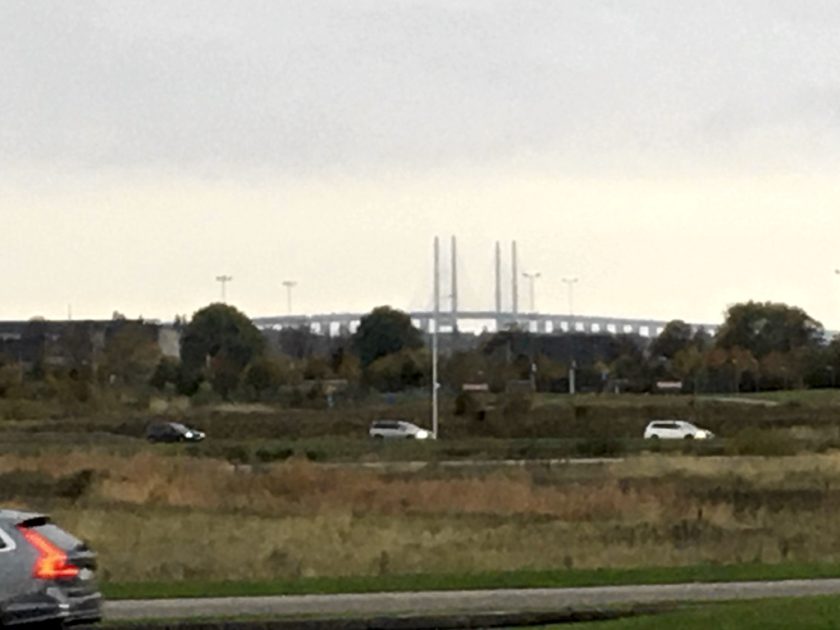 The Arena itself, of course, was the focal point. When not hosting international singing competitions, it is home to the local ice hockey team, the Malmö Redhawks. I did research the team roster, and I have concluded that I would allow at least 75% of the team to do things to me. Ahem. 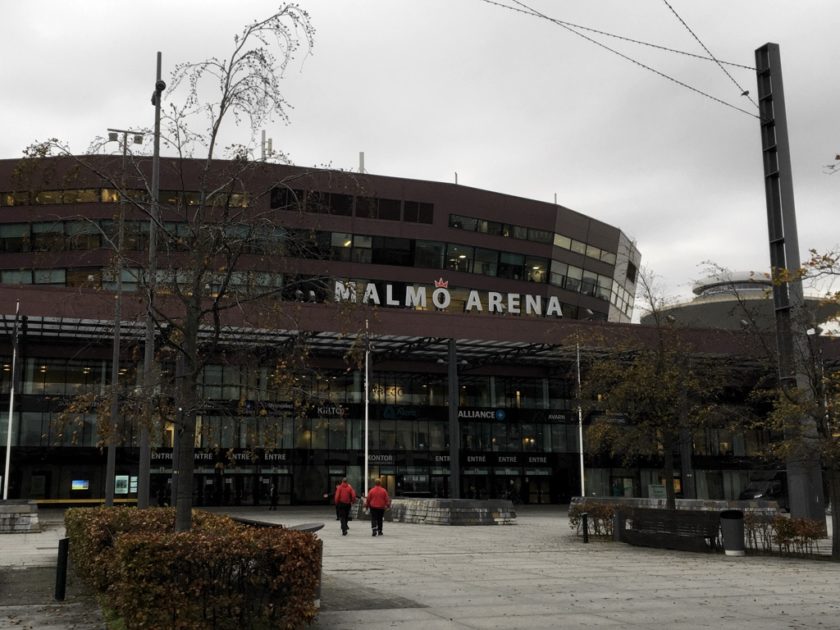 Really, though, we were strictly concerned with its place in Eurovision history. In particular, it is the place from where the best six minutes of television ever made were broadcast – the incomparable Petra Mede performing “Swedish Smörgåsbord”.

Having made our pilgrimage and paid our respects, we boarded another train from Hyllie back to Copenhagen. We certainly only scratched the surface of what Sweden’s third largest city had to offer. I would definitely like to return one day, maybe spend a couple of days here and visit some more local tourist attractions. Perhaps in combination with the aforementioned sleeper train to Berlin.

Back in Copenhagen, after a delicious meal at Café Apropros, we ended up heading back to Oscar Bar and Café for a second night. Hey, don’t mess with a successful formula.