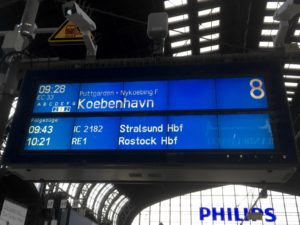 Having spent a lot of time on Germany’s ICE electric trains, we now found a diesel IC3 train from the Danish State Railway burbling away on the platform. This is a necessity, as much of the line through Schleswig-Holstein to the port at Puttgarden is not electrified. After so much time on silky-smooth electrics, having a throbbing diesel engine underneath us for the journey took some getting used to. 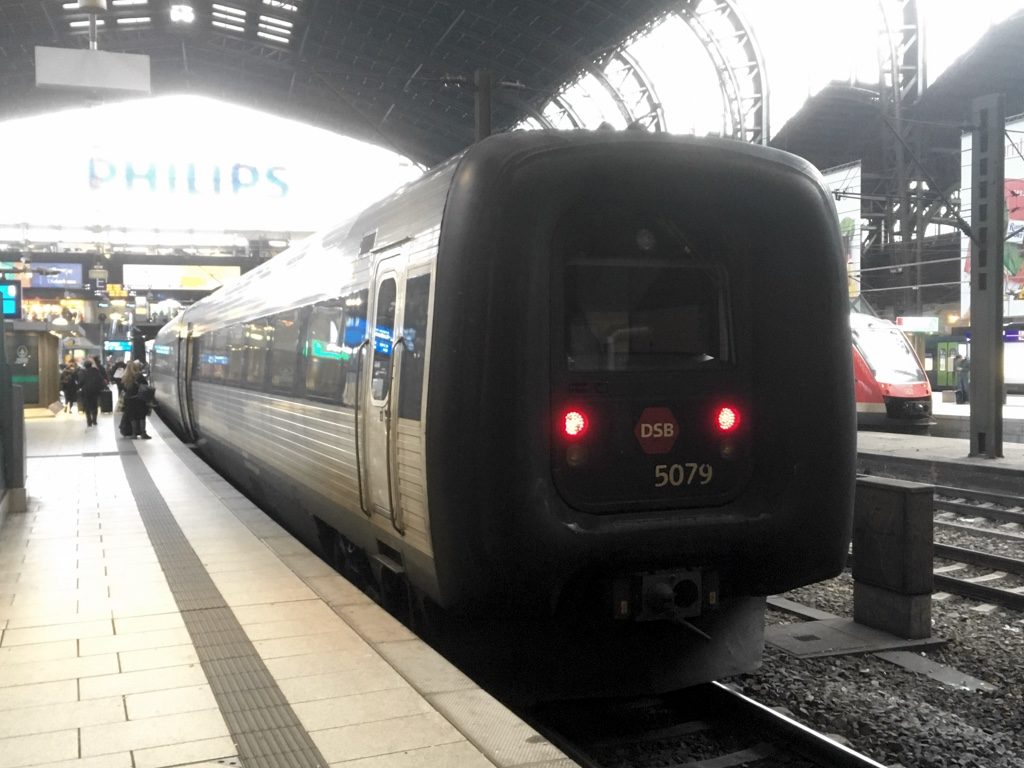 The train was busy – a maximum of six coaches are possible on this route, as that is all that can fit on the ferry, and with only three trains a day that really isn’t enough to meet the demand. We had two window seats reserved, sitting opposite each other on a table. By the time we boarded, the aisle seats were already taken, and we had to do the awkward shuffling of bodies to get to our seats. After just a few minutes of listening to Paul and I chatting away, our neighbours got up and moved to other seats. I don’t think we were being that salacious. In any event, the seats weren’t empty for long as another older couple sat down.

Perhaps surprisingly, for a journey of over five hours, there is no catering on board. Luckily Paul and I had prepared for this and stocked up at the Hamburg Hbf branch of Spar beforehand. I had gone for my quintessentially German treat of Mezzo Mix (orange-flavoured cola, a product of the Coca-Cola Company and seriously, WHY do they not sell it outside Germany?!) while Paul had some Kettle Crisps and Haribo, washed down with “travelling water”.

We did have power sockets, although annoyingly they were mounted above us, in the luggage racks, and my phone charger cable wasn’t quite long enough to plug it in and rest the phone on the table, so I had to hold it in my hand most of the time. I may have tweeted even more nonsense than usual as a result.

These power sockets are as happy to be on this train as I am. #TågFärjetur pic.twitter.com/T9oQBSOEKZ

Leaving Hamburg behind, we called first at Lübeck, a grand-looking station with plenty of activity taking place. 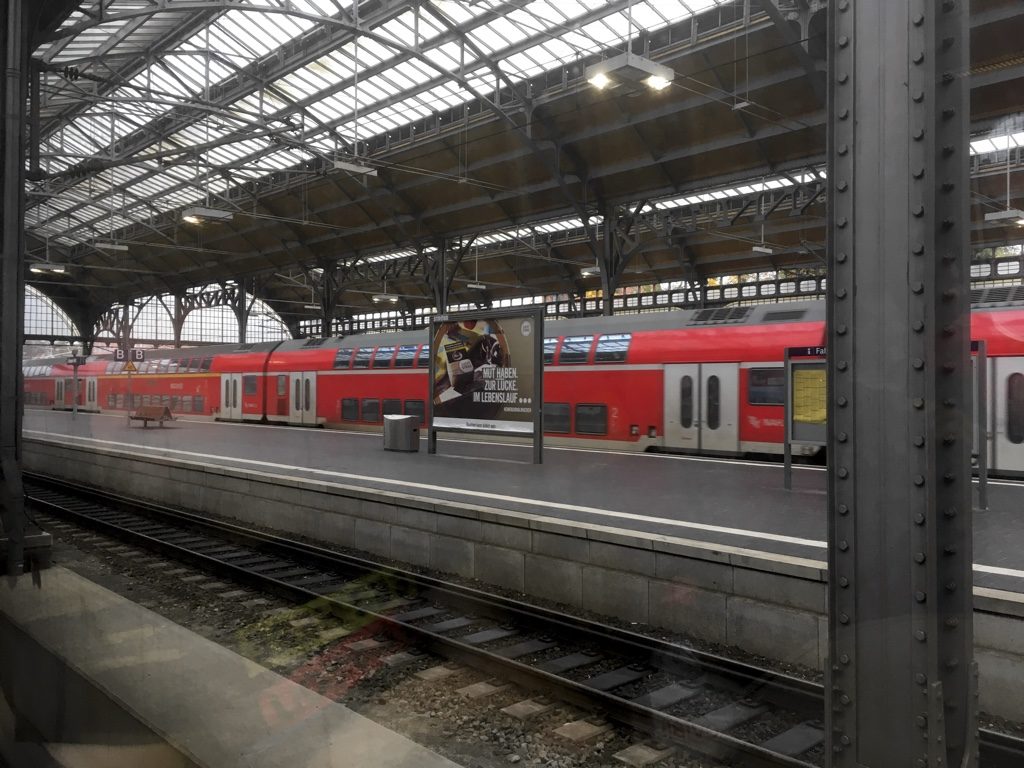 As we continued north, the line became increasingly rural in character, going down to a single track in places. At one point we briefly stopped at a signal with farmland all around us. In the distance a lone animal was grazing in a field. Paul and I got into an intense discussion as to whether it was a cow or a horse (look, we’d been together three days and conversation topics were starting to run out).

“I think it’s a cow,” chipped in the gentleman sitting next to us. Well, that settled that. We got chatting to him and his wife. They had been on a tour of their own, visiting Poland, Ukraine and Austria, and were now on their way back to Sweden. They were very friendly and interesting to talk to, and just as we were forming a genuine bond, someone showed up to claim their reserved seats and they had to move. Bah.

About 90 minutes after leaving Hamburg, we reached the port station of Puttgarden, which showed signs of being a grander station in the past, with several disused platforms in evidence, still with canopies and the old-style split-flap indicators in situ. The trackbed itself was now heavily overgrown. 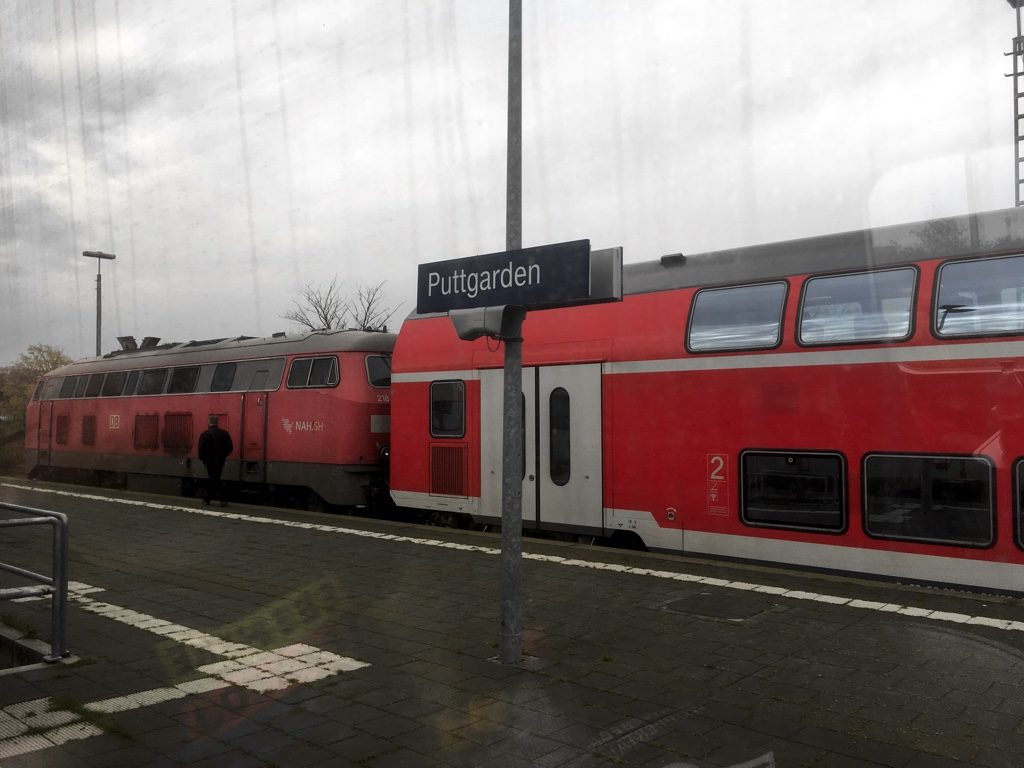 Leaving Puttgarden station, the train entered the ferry port itself. We joined the roadway on tramway-like tracks, and rolled onto the car deck alongside trucks and coaches – apart from the railway tracks embedded in the deck, this is a normal roll-on roll-off ferry for road vehicles. At walking pace, we gently edged forward until we reached the correct stopping place, and the train was locked in position for the voyage.

It was announced in three languages that passengers were absolutely not allowed to stay on the train during the ferry crossing, so we alighted and headed upstairs to the passenger decks. The ferry crew absolutely did not hang about getting underway; by the time we had left the train, the ferry doors were shut and we were leaving port for the 45-minute crossing of the Fehmarn Belt. 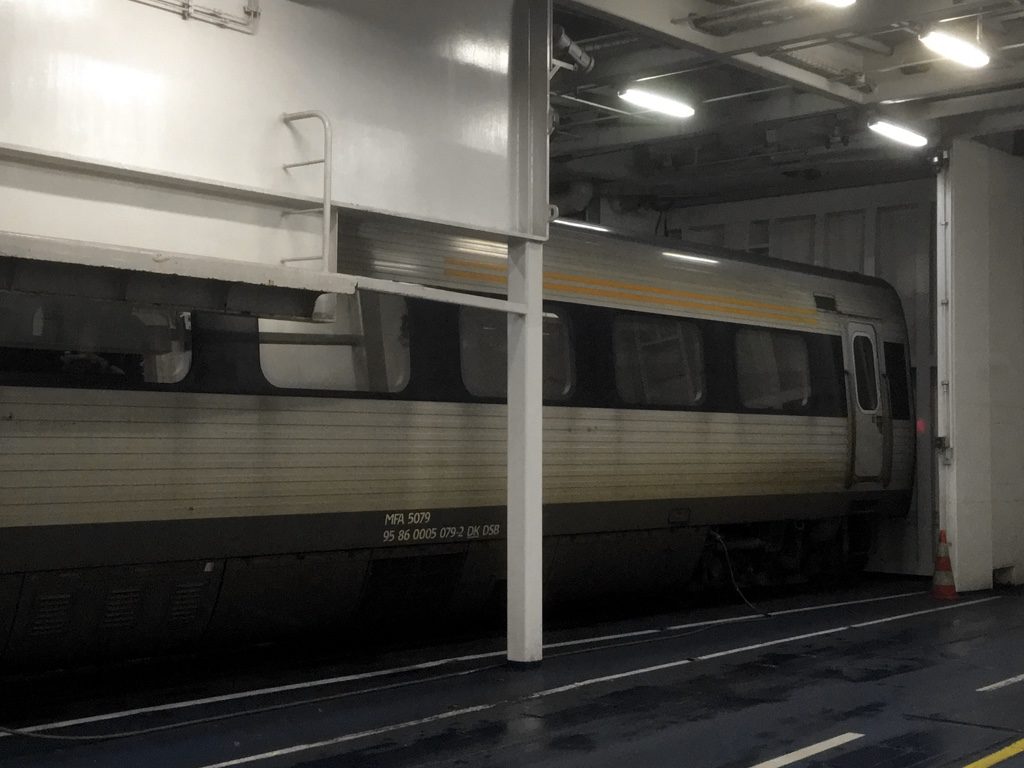 The ferry itself is operated by Scandlines, and has all the features you would expect for a crossing of this nature, namely a very expensive on board café and shop. One interesting feature is that these are hybrid ferries, using a combination of diesel and electric power as required. 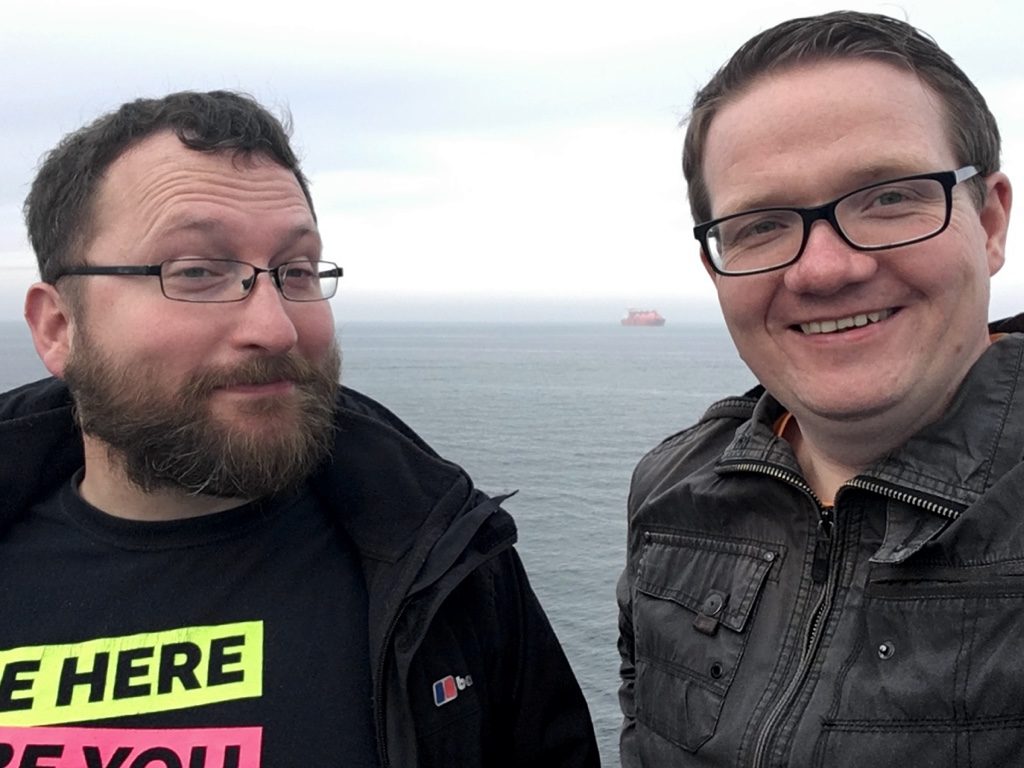 We spent most of our time up on the outdoor deck, where it was rather breezy and damp, but nothing serious for anyone who has travelled on the Mersey Ferries. Whilst up there, we observed another ferry travelling in the opposite direction – services are frequent on this route, up to every 30 minutes, with ferries zipping back and forth 24 hours a day.

A beep from my mobile phone, alerting me that I had roamed into yet another country, was the first hint that we were approaching Denmark. It wasn’t long before the announcement came over the speakers that we would be arriving at Rødby shortly and to return to our vehicles.

I will admit, at this point I got slightly anxious. The one piece of advice I had been given from numerous sources was, “make sure you are back on the train in good time.” A friend of mine who travelled this route a few years ago was tardy in getting back below deck and saw the train had gone without him, with all his luggage on board. 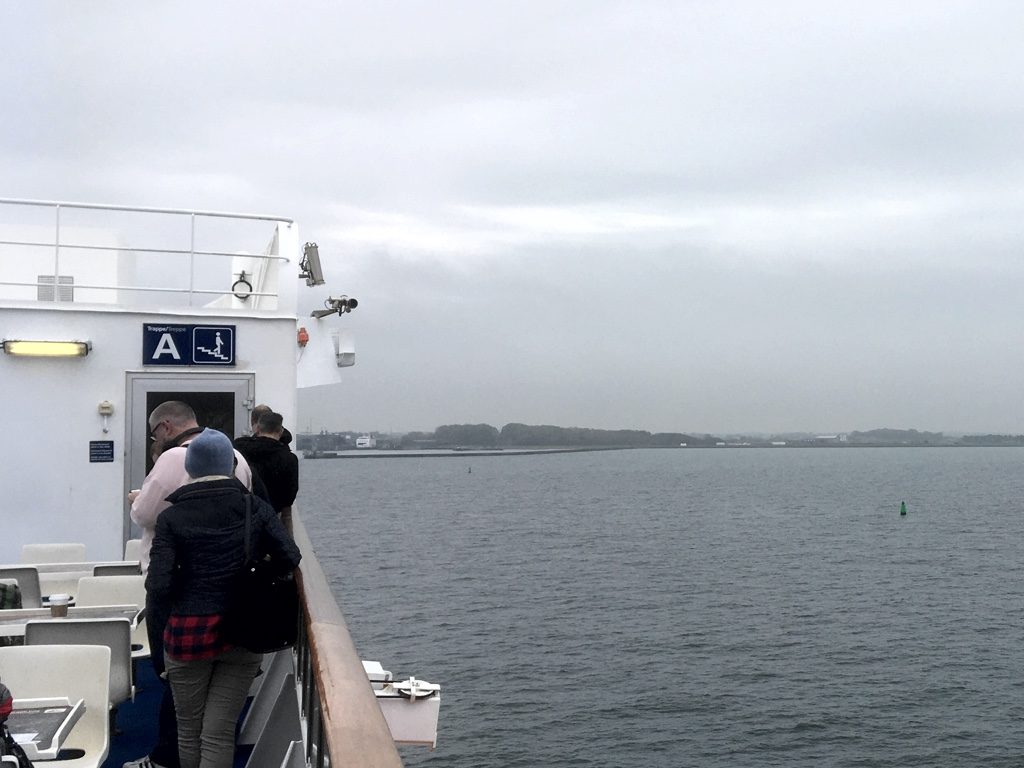 So while Paul was happy to hang around on the vehicle deck, snapping some photos of the train, I immediately hurried back to my seat. “Where’s the fire?” asked Paul when he finally returned, mere MOMENTS before the train started moving.

We travelled a couple of hundred metres, coming to a halt in the platform at Rødby station. Like Puttgarden, this was another station that showed evidence of being much more important in the past. Multiple tracks and platforms, but all seemingly abandoned – instead we used a newly-built platform with a bus shelter type structure for waiting passengers.

At Rødby the police were waiting to do a full passport check on every passenger. I was aware that these checks are a regular occurrence now, so I had my passport ready to show them. I make it a policy to never keep a man with a gun waiting.

Passport control walk through the train before we continue to Rødby. This is the first time anyone has looked at my passport since London. ^PK#TågFärjetur pic.twitter.com/cAhZUxgw3M

Denmark and Germany are both part of the Schengen Area, but passport checks were reintroduced on the ferry in response to the European migrant crisis a few years ago. Whether these checks are necessary or a bit of an overreaction is a matter for debate, but it does rather make a mockery of the claim made by Brexiteers that remaining in the EU means we cannot control our borders.

Oh balls, I got this far without mentioning Brexit. Sorry to depress everyone, on with the journey…

A change in voice on the announcements confirmed that the German train crew had been replaced by a Danish crew. As far as passengers joining the train now were concerned, we were just another inter-city train among hundreds on the DSB network.

Rødby aside, most of the stations on the Danish side of the journey had large station buildings, probably too big for present-day purposes, but nevertheless well looked-after. Below is Glumsø. 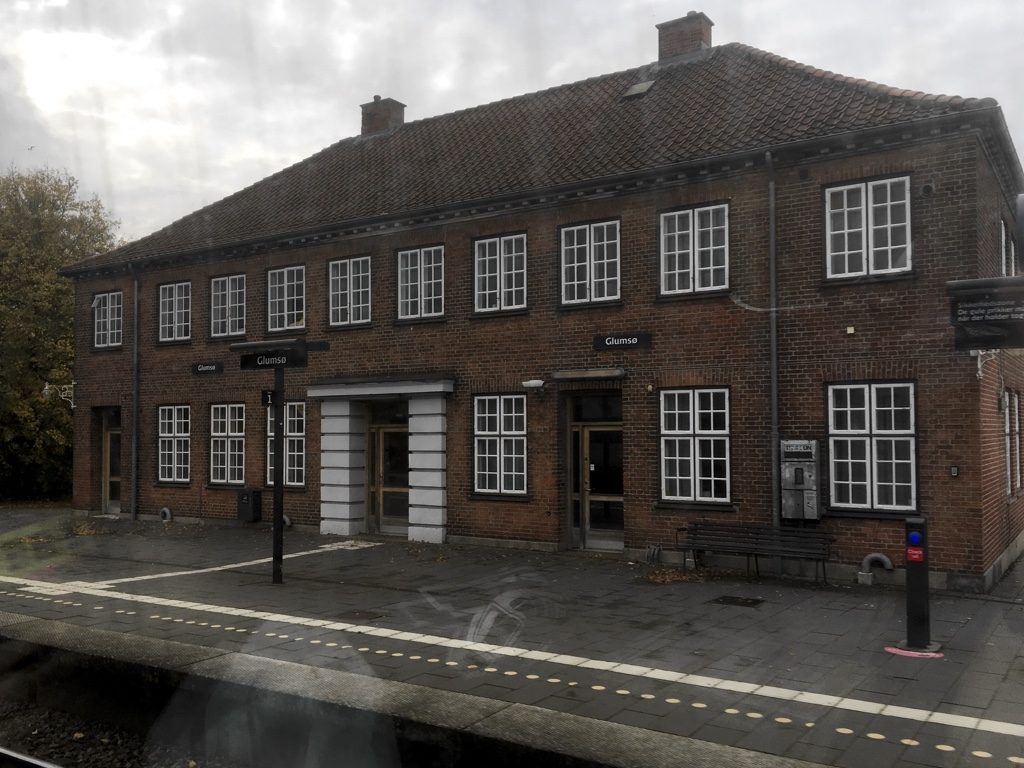 As we got closer to Copenhagen, more and more people joined, until the train was standing room only. Once again I was glad to have reserved seats. At Næstved I saw a family board with a folding picnic table and some chairs, which might have been their way of guaranteeing themselves somewhere to sit down. 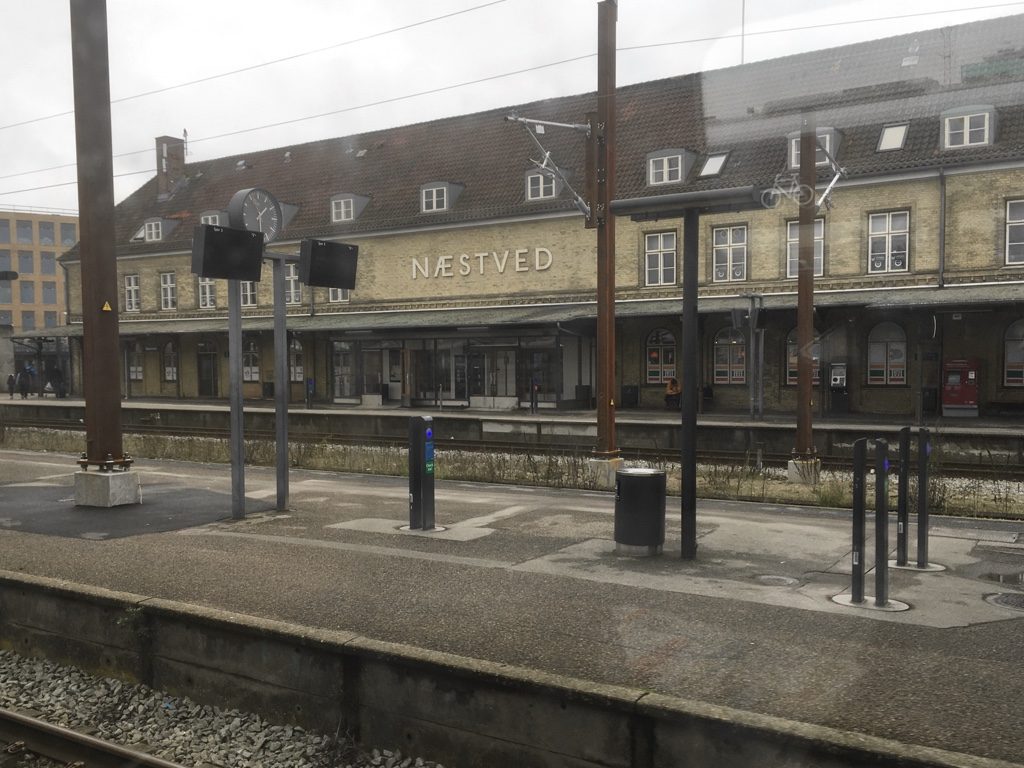 The last section of route was on the newly-inaugurated Ringsted-Copenhagen high speed line, opened in June 2019. Eventually, new high-speed trains will serve this route, but until then the older rolling stock is using it. Our train’s engines worked hard, but I suspect that it wasn’t taking full advantage of the 250kph line speed.

Sadly, the shiny new station at Køge Nord was a rather plain-looking concrete and glass structure next to a motorway, without the charm of the previous stations on the “classic” line. 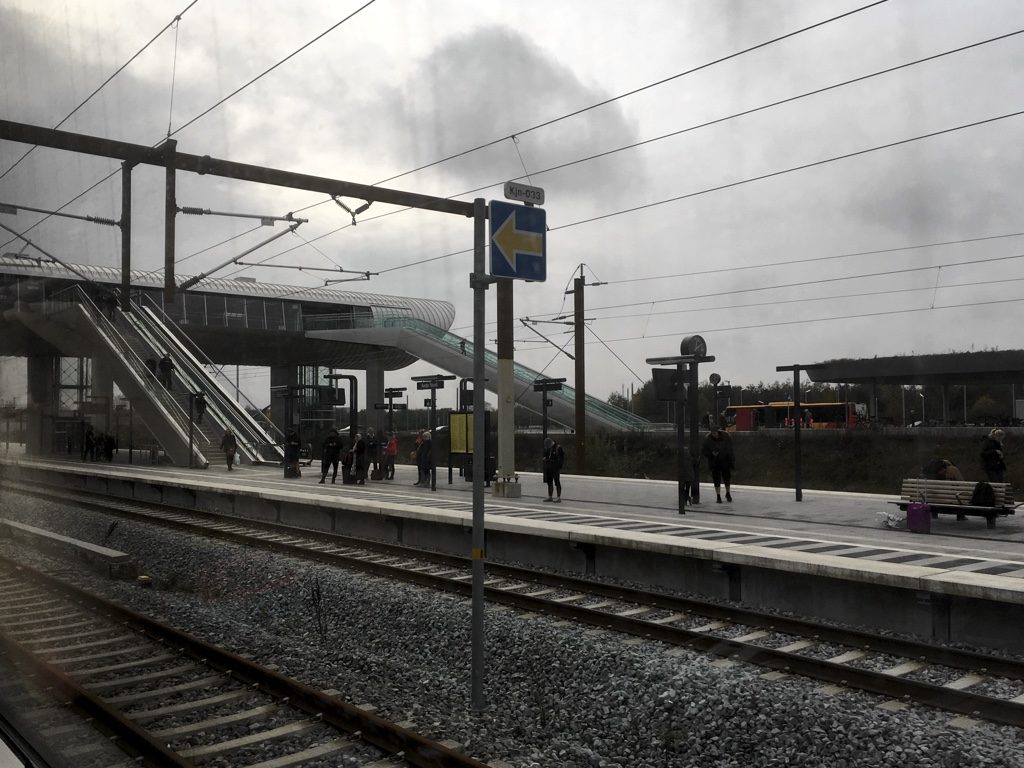 Finally, some five hours after leaving Hamburg, and just as we ran out of Kettle Crisps, we were arriving in Copenhagen Hovedbanegård. “This train does not go any further,” announced the guard, although I think we had gone far enough that day. 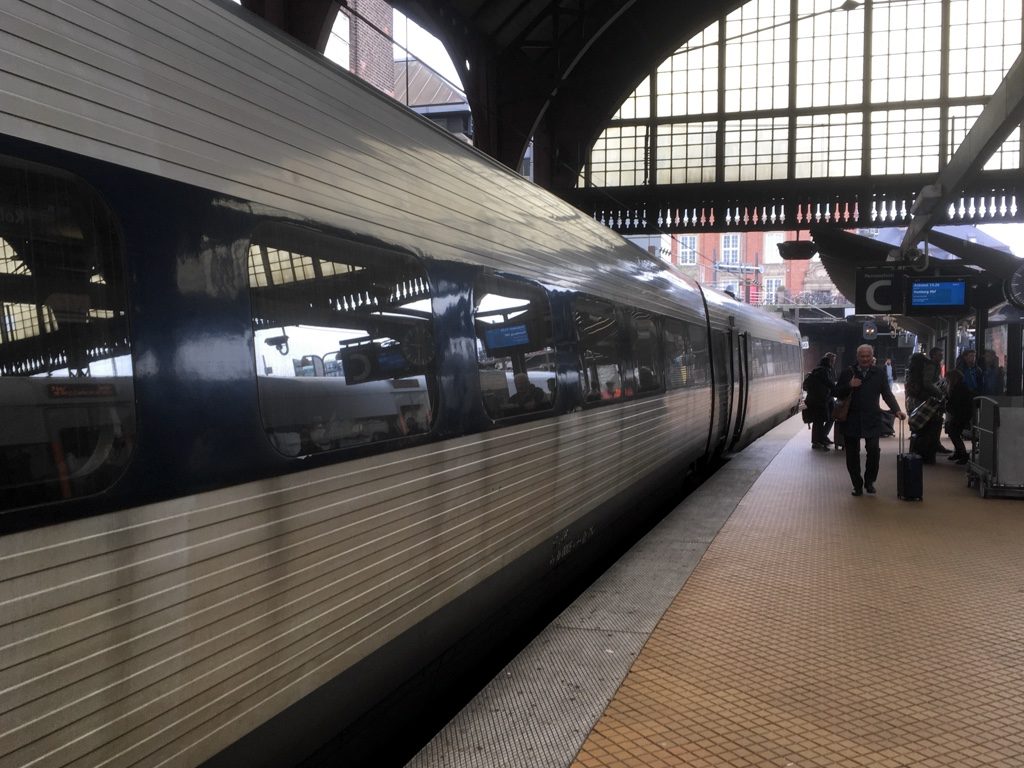 Copenhagen Hovedbanegård (Central) station itself is brilliant; a grand bustling terminus in the best railway tradition. The concourse is cluttered up with shops, but not so much that it impeded passenger flows (I’m looking at you, London Euston). I could happily have spent hours there soaking up the atmosphere. 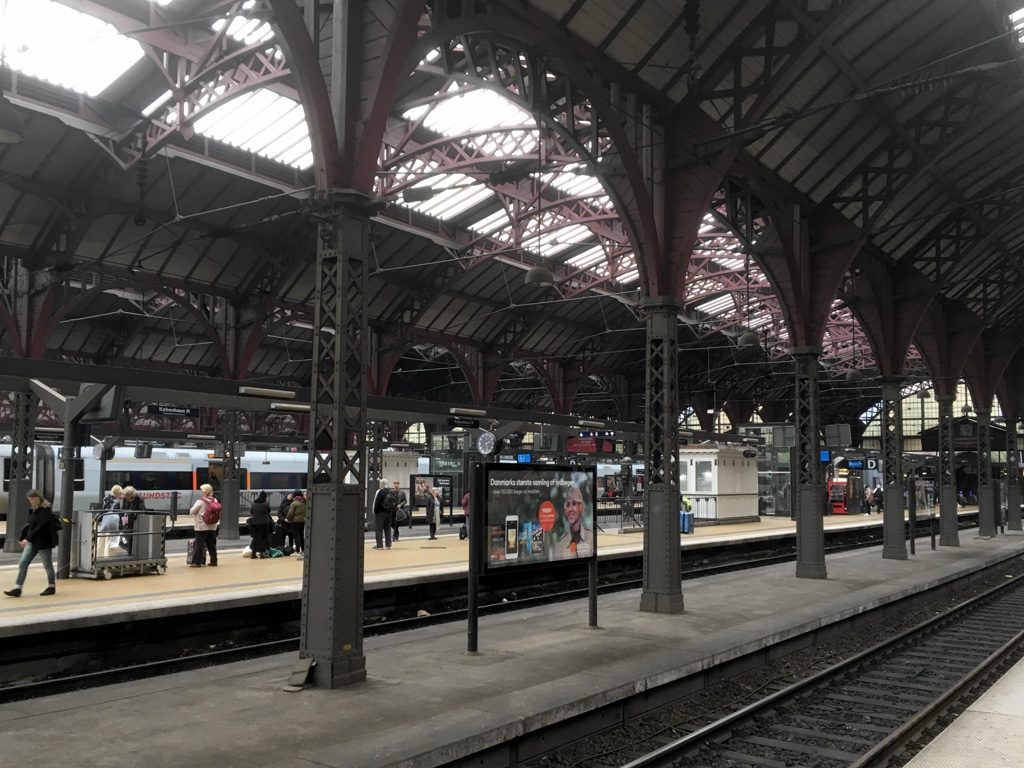 Paul had arranged to meet his friend Mads to spend the afternoon with us. While waiting for him, I was able to take a few minutes to ponder the trip so far. This was the mid-point of our five day excursion, and I was thrilled at how well everything had worked out. With no major hitches, we had experienced the best of European rail travel, and there was still more to come. 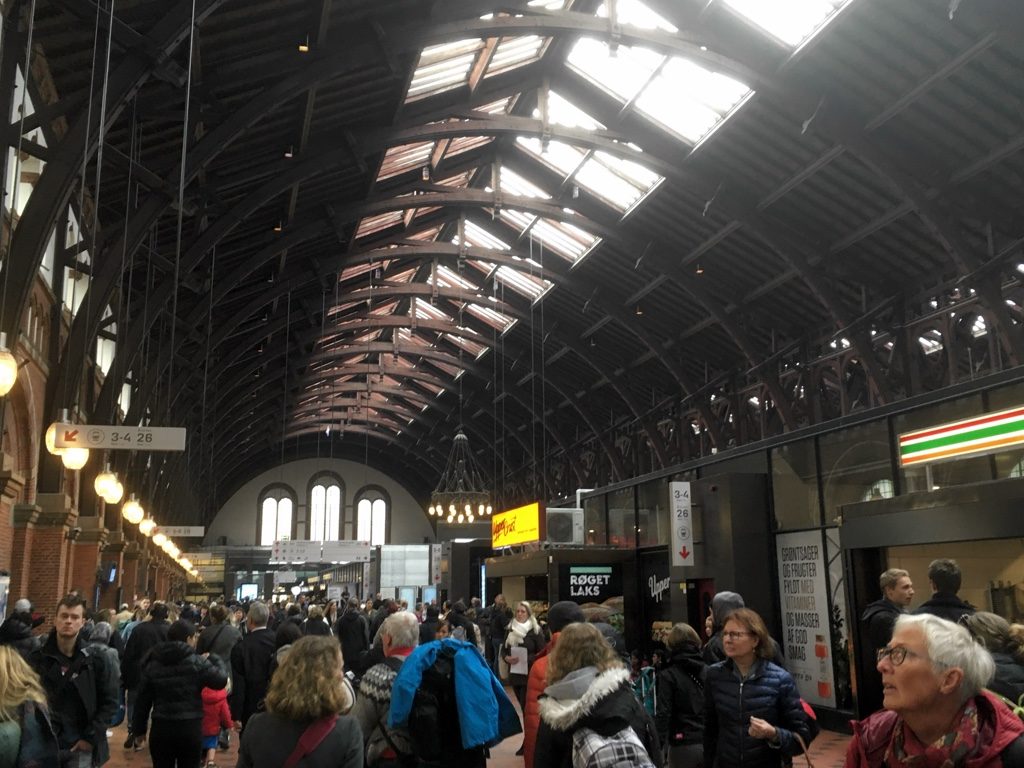 From 15th December, trains between Hamburg and Copenhagen are rerouted via Odense while the railway line on the German side is upgraded for high speed trains. From 2024, trains will return to the route, but between Puttgarden and Rødby they will travel via the Fehmarn Belt Fixed Link road/rail tunnel. Travel time through the tunnel will be just 7 minutes – a big time saver for sure, but it’s still sad to see this unusual railway service disappear. If you want to ride it, you have just over a month left!