Much of the Tiergarten, Berlin’s enormous public park, was also fenced off for the concert. Given the access restrictions, when arriving at the concert later I decided to approach from the other side of the Brandenburg Gate, taking the train to Hauptbahnhof and then walking through the government quarter to Yitzak-Rabin-Straße, which was one of the entry points.

The concert was due to start at 6pm, and “arrive early” was the advice. I got there just after 5pm. Yay my disorganisation! 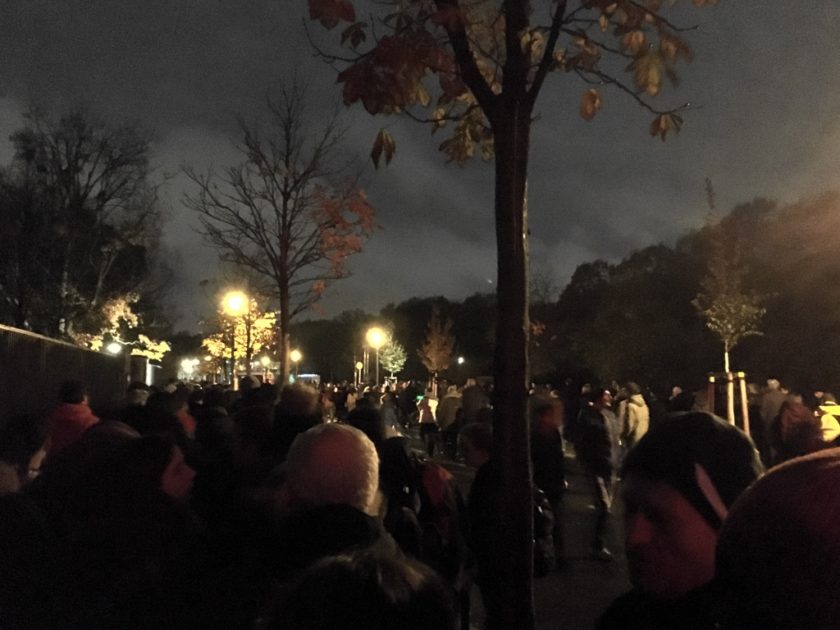 There was a lengthy queue to get in, and it was not moving particularly quickly. As I got nearer the front it became obvious that part of the reason for this was people who hadn’t read the entry restrictions. They were getting turned away because they had large bags, alcohol or other prohibited items with them. Two men immediately in front of me got extremely angry with the security guard that they were not allowed in with their rucksacks, not helped by the fact that they apparently spoke neither German nor English. 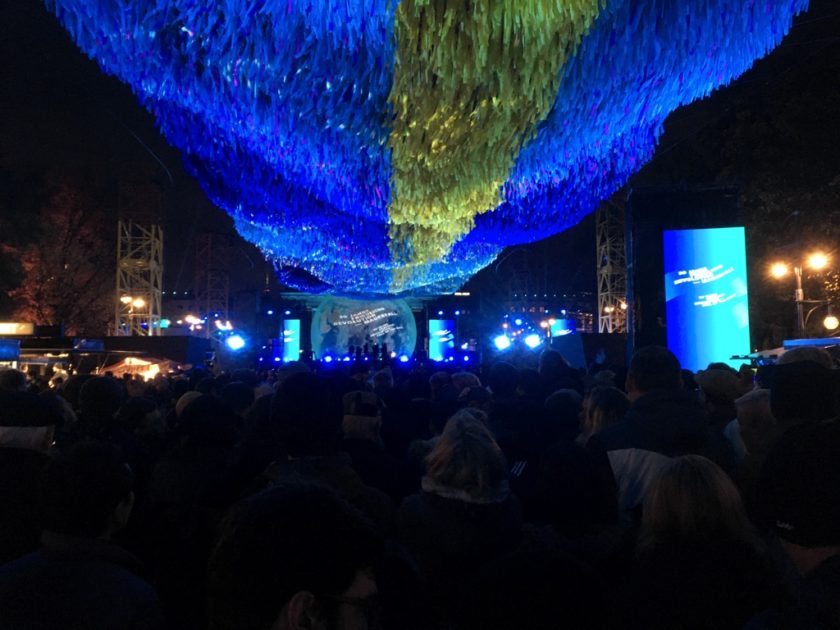 I made it into the showgrounds just before 6pm. Unsurprisingly, by this point the crowd was so huge there was no chance of getting anywhere near the stage. From my vantage point I couldn’t really see anything, but there were big screens set up to relay the concert to those at the back.

I had some time to admire the artwork “Visions in Motion” by Patrick Stearn. Tens of thousands of people supplied messages on ribbons which were joined together and suspended above the Straße des 17. Juni, where they billowed and rustled gently in the breeze. 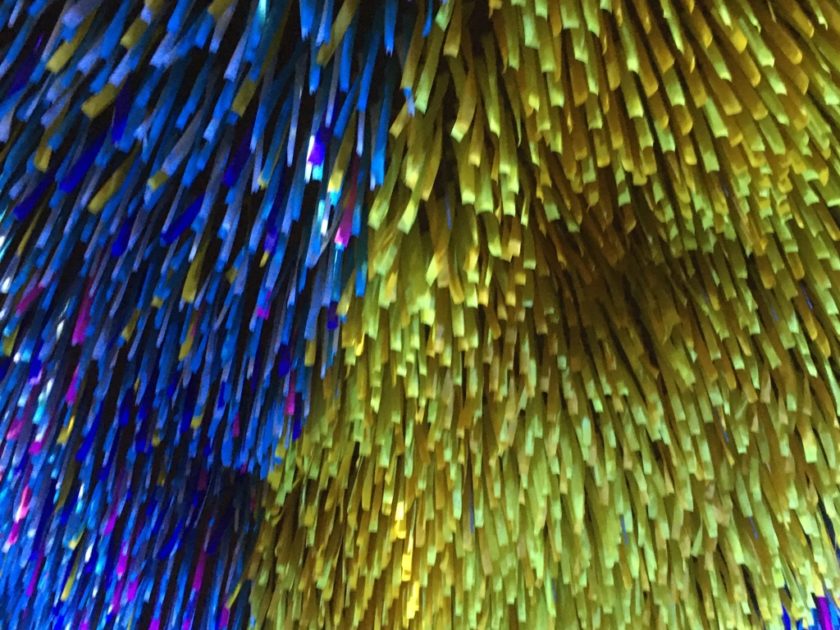 The concert started with some speeches from assorted bigwigs. Michael Müller, the mayor of Berlin, gave a speech which seemed to go down well with the crowd. Anyone hoping for a sighting of Chancellor Merkel was disappointed, although the German President, Frank-Walter Steinmeier, did appear. I understood probably about 5 per cent of what Steinmeier said, although I did pick up on praise for America for its role in ending the Cold War, and a warning against present-day “National Egotism” (can’t imagine who he was referring to).

The East German civil rights activist Marianne Birthler also spoke, and asked for a minute’s silence for the victims of the East German regime.

I will admit I felt slightly like a fish out of water at this point. I was glad to be here, but as an Englishman surrounded by Germans, I felt a little bit like I had gatecrashed someone’s private party.

Speeches out of the way, we moved onto the musical part of the evening. The German rapper Trettmann performed Stolpersteine – his tribute to the millions of Jewish people who were killed by the Nazis. An appropriate thing to include in this concert, as 9 November is not just the anniversary of the fall of the Wall, it is also the date in 1938 when the horrendous Kristallnacht pogrom was carried out by the Nazis. “Stolpersteine” refers to the small plaques or “stumbling stones” which have been installed on pavements across Europe, outside the former homes of people who were murdered by the Nazi regime.

The Staatskapelle Berlin, conducted by Daniel Barenboim, performed Beethoven’s Fifth Symphony. The performance was accompanied by a montage of archive footage covering the history of the Wall from 1961 to 1989.

This was followed by Jennifer Kothe, performing a version of David Bowie’s Heroes.

In stark contrast to the previous acts, the rap duo Zugezogen Maskulin were next. They performed Was für eine Zeit, which certainly woke up anyone who wasn’t fully paying attention.

One last poignant moment came when a group of child refugees were brought on stage. They told of their hopes for the future and expressed their gratitude to Germany for taking them in. An important message, when attitudes to immigration and refugees seem to be hardening across Europe.

After the final fireworks display, the aftershow started. This being Berlin, it was a techno dance party with DJ and lasers. I decided to take my leave at this point, and headed back to Hauptbahnhof for something to eat and a train.

The whole shebang was televised by ZDF, who have provided a 16-minute highlight reel on their YouTube channel.

By the end, my earlier discomfort had gone. The happiness I was feeling was tempered only by the thought at the back of my head, that in a couple of days time I would be returning to a country which seems keen on putting up as many walls as possible.

But I put those thoughts to one side for that night. It was an absolute honour to be present during the Mauerfall 30 events, and to be alongside thousands of Berliners as they celebrated. What a night. What a city. 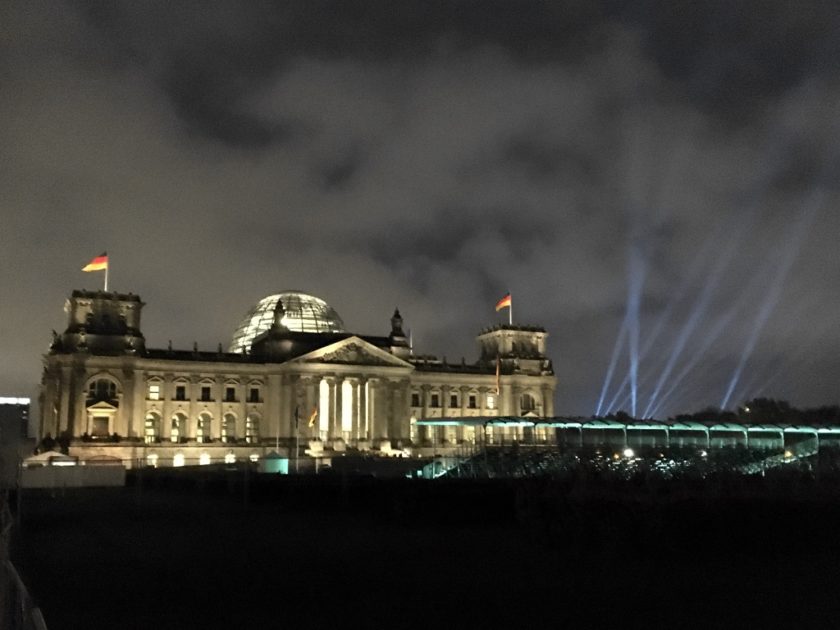