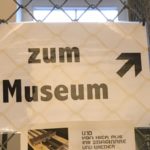 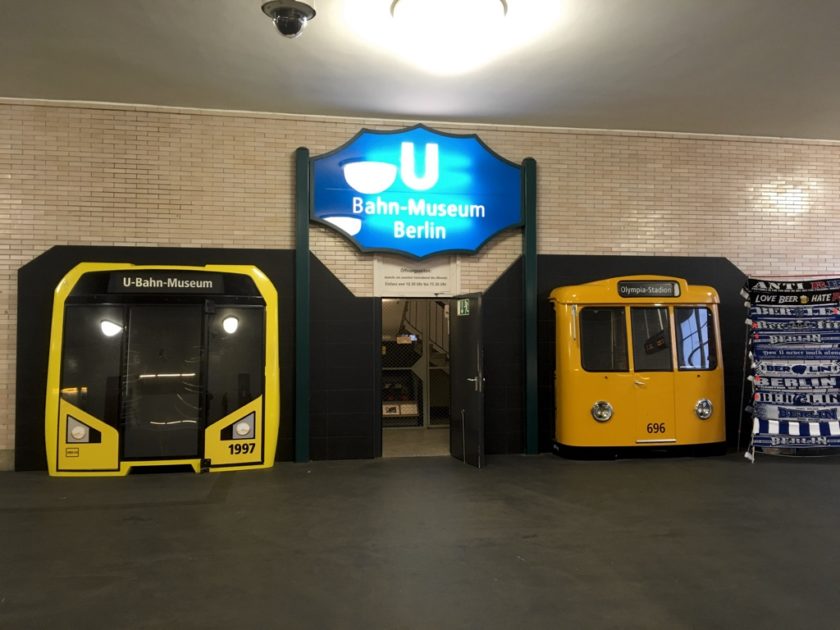 Regular readers (hello both of you) will not be surprised to hear that I love the Berlin U-Bahn. Not only is it an excellent way to get around the city, but it is an attraction in its own right, with some brilliant examples of station architecture, and some quirky marketing from the city’s public transport body, BVG. I love the music video they made below, for example.

The U-Bahn Museum is in a former signalbox at Olympia-Stadion station. It is open for precisely twelve days each year, on the second Saturday of each month, so if you want to see it, plan your stay carefully. 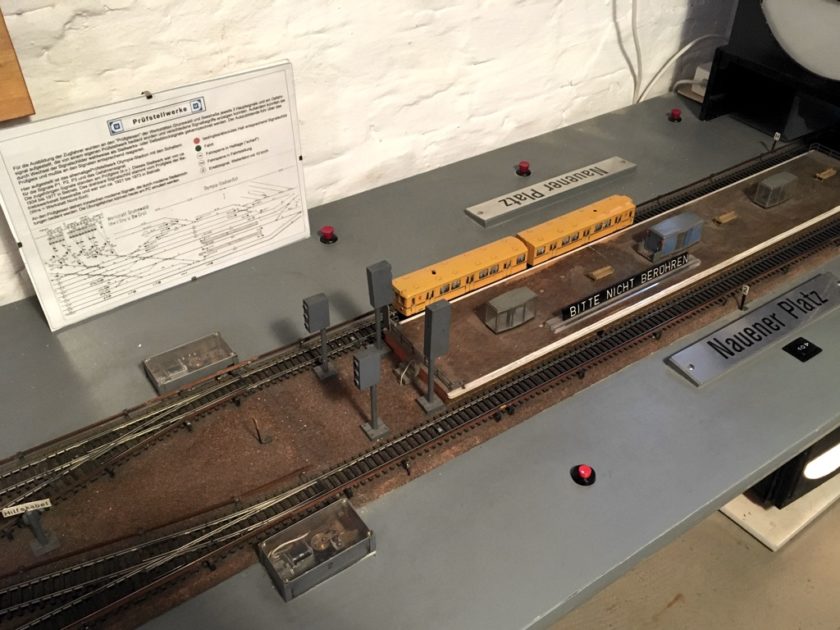 One thing to remember: other than a few models, there are no actual trains on display here. There is a museum fleet of vintage U-Bahn trains, but to see and ride them you need to look out for the occasional Historisches Sonderzug trips that the museum run in conjunction with Berlin’s public transport organisation, BVG. 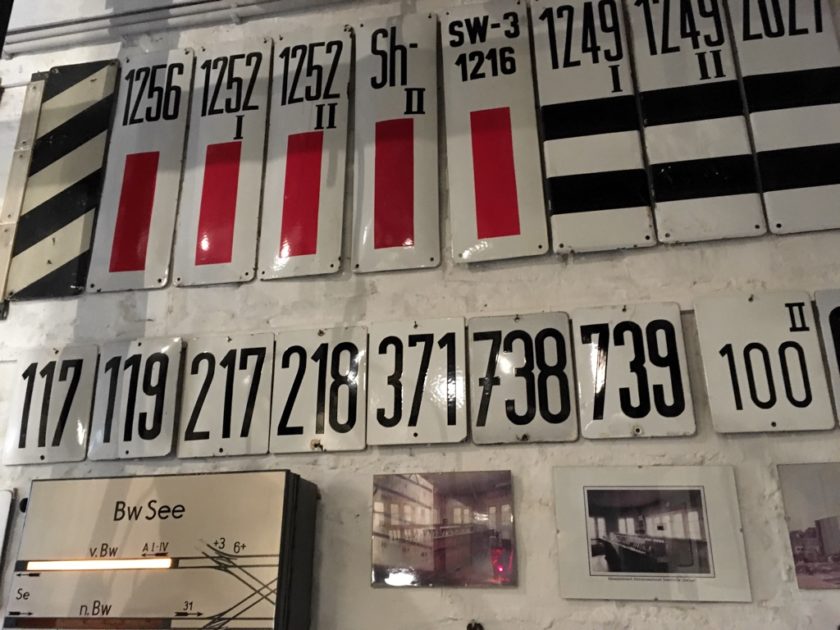 What you will find in the museum is a wealth of memorabilia from over a century of U-Bahn development. It seems that whenever an item – be it a poster, ticket machine, signal equipment or anything else – reaches the end of its useful life, it ends up here. Every surface was plastered with paraphernalia from the start of the 20th century to the present day. 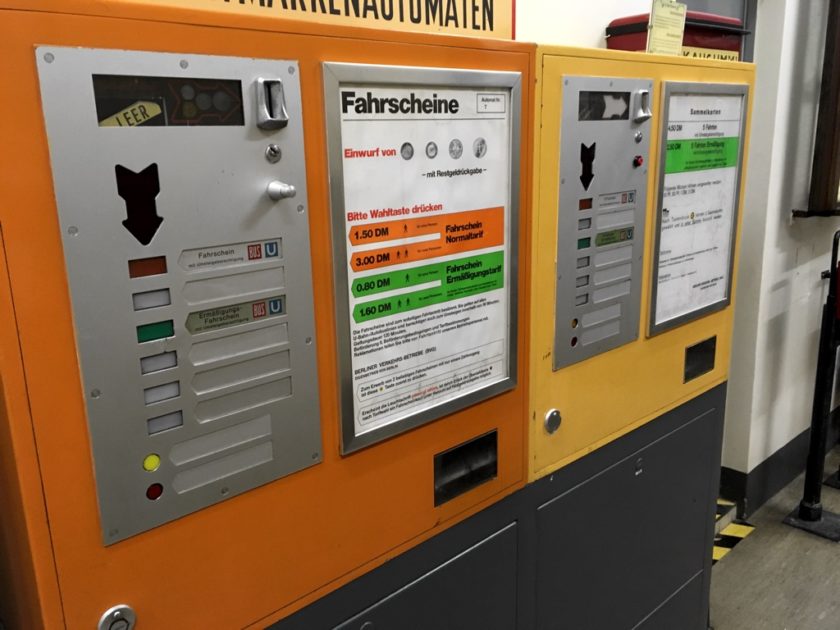 The real problem, for me, was that pretty much everything was in German, with technical explanations beyond what my limited understanding of the language could grasp. Don’t get me wrong, I’m not complaining that a museum in Germany uses the country’s native language, but it did limit the experience slightly.

Having said that, even if the language is beyond me, I could still appreciate some U-Bahn poetry:- 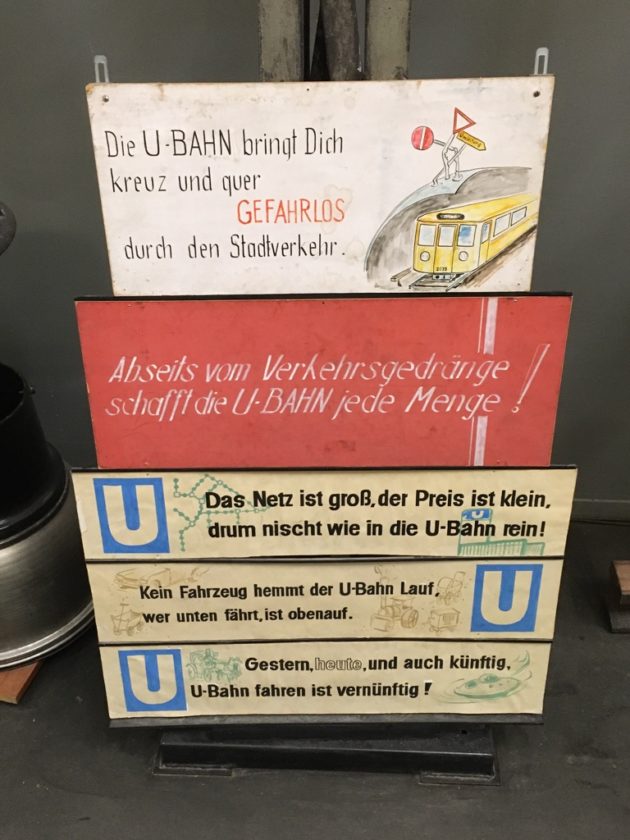 The highlight must surely be the original signal control room, with massive illuminated track diagram, and bank of levers. It was all perfectly preserved, presumably looking exactly as it had done when in service. 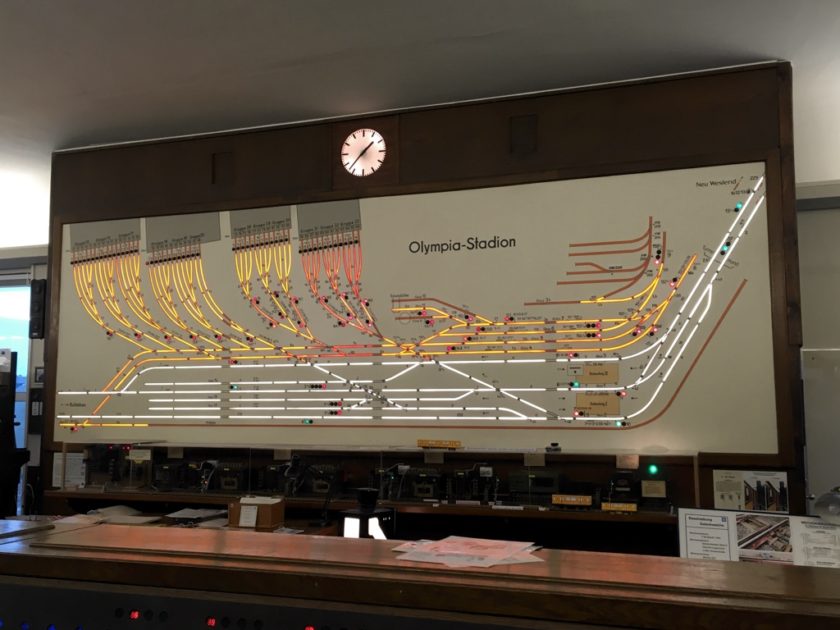 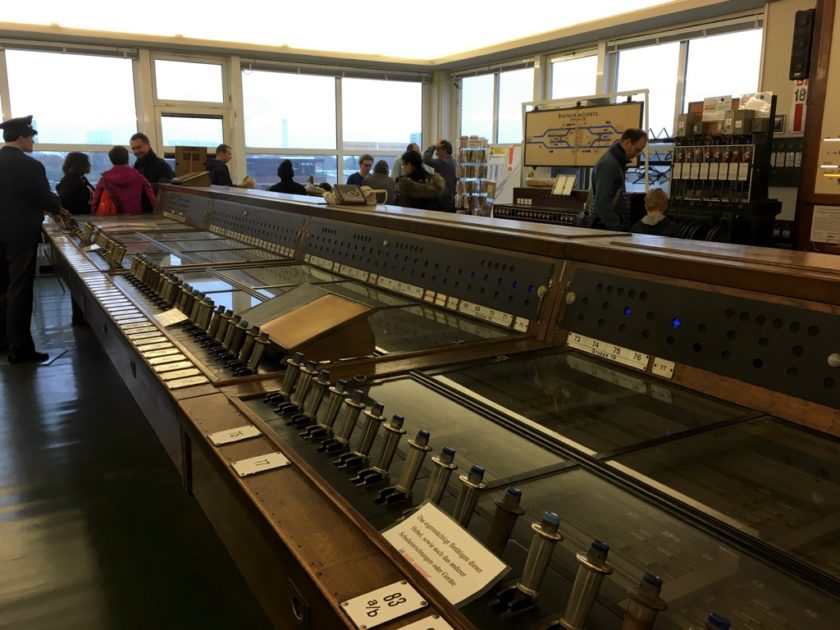 I was happy to just potter around, but one of the museum volunteers noticed me and called me over to join a demonstration talk he was giving. He was about to describe how U-Bahn signalling and train protection worked. I did warn him that my German was sehr einfach but he didn’t seem overly concerned. Unfortunately, his English was very basic (although still better than my German) and because the other museum visitors were German speakers, he had to explain everything twice. 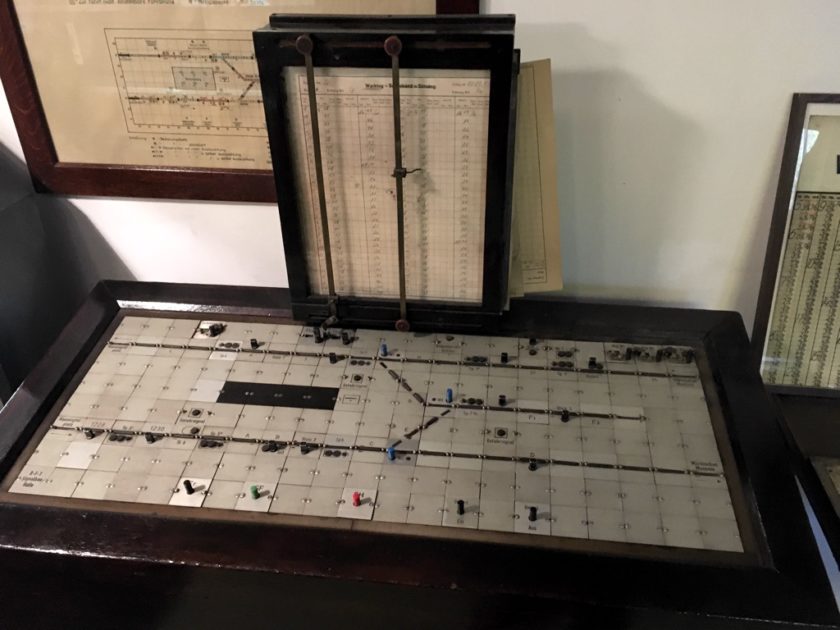 It was supremely awkward, and I got the impression the other guests were starting to get annoyed by my presence. I did get the gist, and was able to translate my understanding based on what I know of UK signalling. Basically the U-Bahn uses electric track circuits to detect trains and change signals to red. Safety is provided by train stops, similar to those on London Underground. If a train tries to pass a red signal, the brakes will automatically be applied. The key difference to UK systems is that on the older lines of the U-Bahn, the trip cock which activates the brakes is located on the roof of the train, with an apparatus fixed to each signal which triggers it.

We did also get to see a small piece of old mechanical signalling equipment which used to control a reversing siding – complete with interlocking to prevent a second train being signalled into the siding while it was occupied. 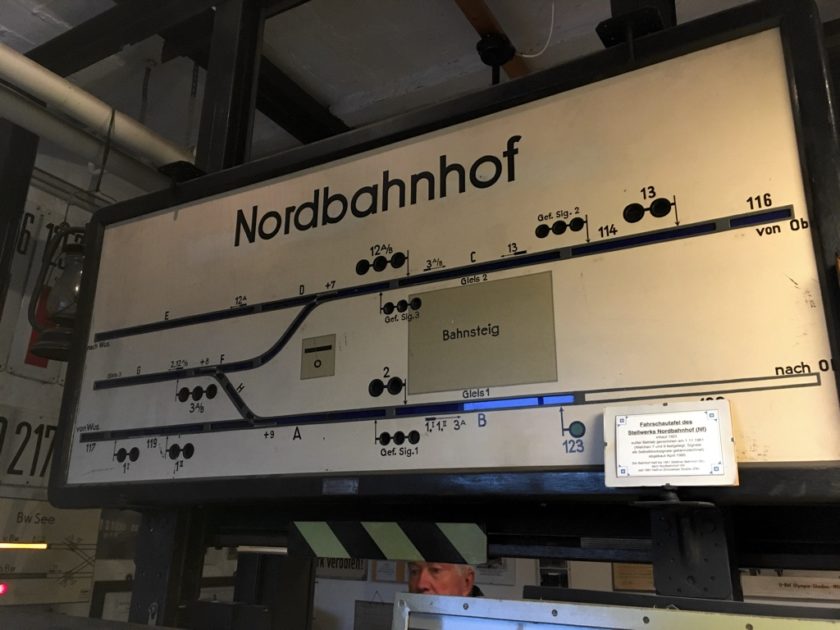 The tour over, I continued to mooch around the museum for a bit longer. I didn’t get a photo, but an old timetable poster for Adolf-Hitler-Platz station was a reminder that you’re never too far away from history in Berlin. Other historic posters, dating from 1947, advise of restrictions on carrying luggage on board due to the dire state of the network in the aftermath of the war. 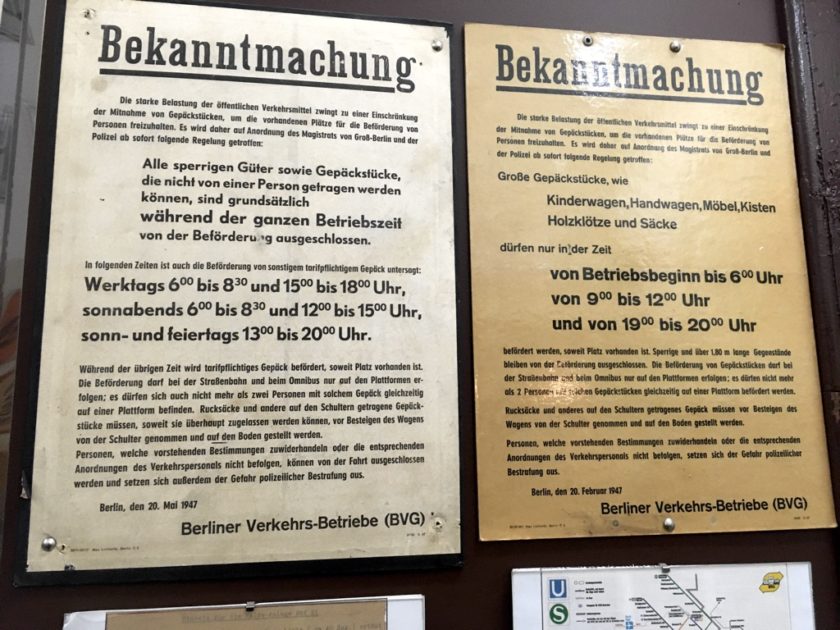 This West Berlin map from 1967 shows the reality of commuting in Cold War-era Berlin – the Berlin Wall is shown as a thick grey line (Sektorengrenze) on the map, while numerous stations are crossed out or marked as “only served by BVG East” – it would be another 23 years before most of them reopened. 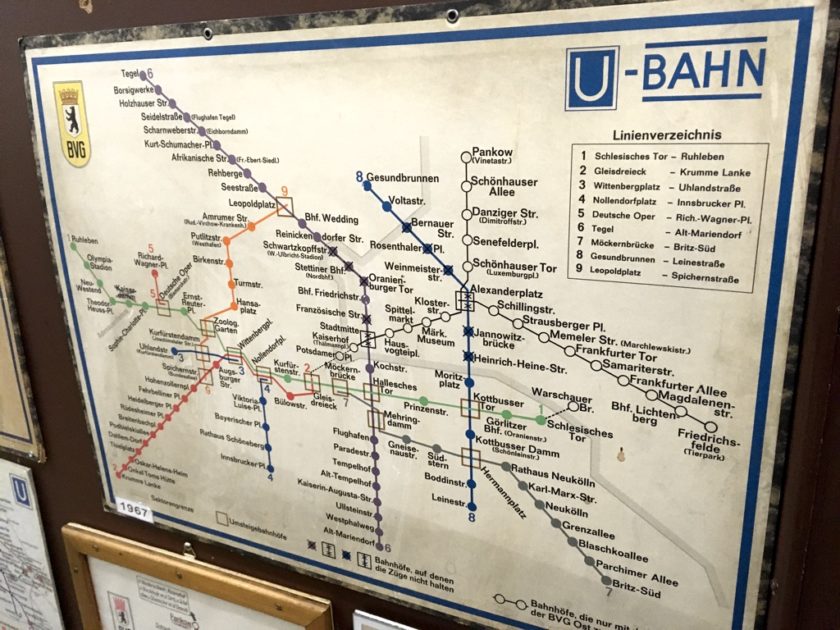 Another interesting point is that the S-Bahn is not shown – even in West Berlin, the S-Bahn network was operated by the East German railway, and it was boycotted by many West Berliners as its fares were seen as subsidising the East.

The later map below dates from 1984. The city was still very much divided, but the S-Bahn is now shown. Much of the S-Bahn in West Berlin was closed by strike action in the early 1980s, until East and West Berlin agreed a treaty that saw the West Berlin S-Bahn taken over by the West Berlin transport authority, ending the boycott. 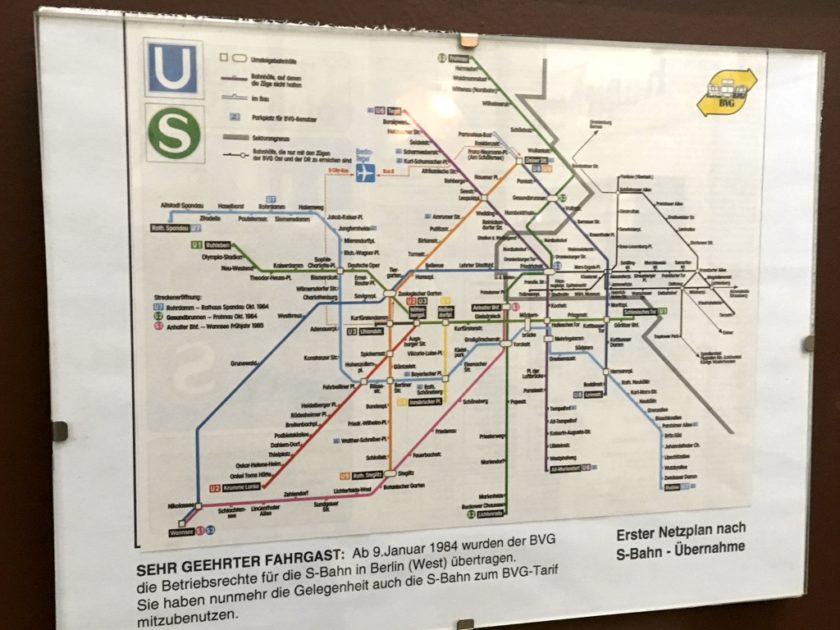 The U-Bahn Museum is not massive, but I still found it absorbing despite my limited German. It’s well worth making the effort to visit it on its rare open days, and well worth the €2 entry fee if you’re a train nerd like me.

I will leave you with this poster of a man with a very long finger. 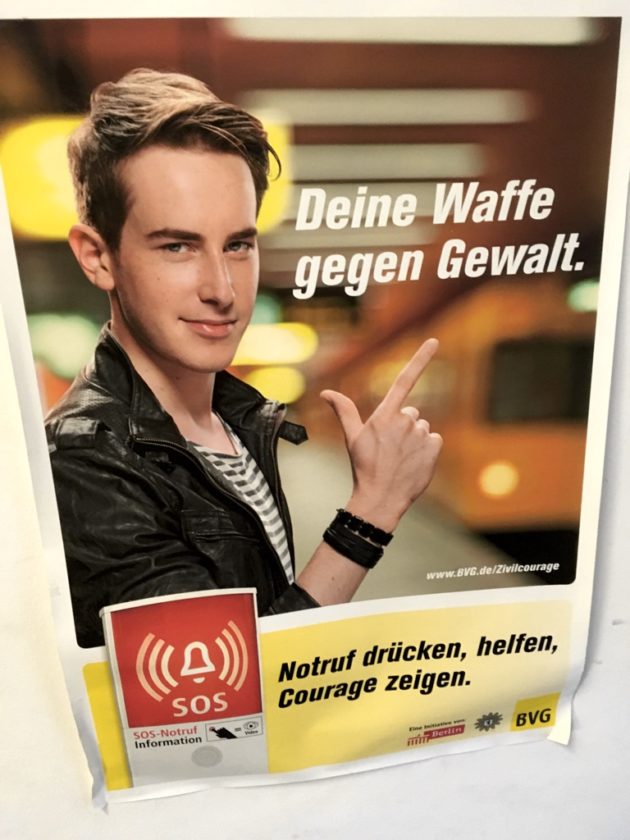 I headed back down to the station for a train back into the city centre. It was getting closer to kick off time, and the westbound trains were disgorging vast numbers of Hertha fans onto the platform. No such crowds going the other way though, and I easily got a seat.

(Hertha Berlin got thrashed 4-2 at home by RB Leipzig)