Turns out the answer to the question “Where next?” was… Berlin.

I last visited Berlin in May 2018, and was starting to feel the itch again. When the cream failed to clear it up, it was obvious that I needed to visit.

I was initially reluctant to venture abroad again, so soon after #TågFärjetur, but the weekend of 8-11 November was the perfect time to go. The city was hosting a series of special events to mark the 30th anniversary of the fall of the Berlin Wall, under the heading Mauerfall 30.

Even at two weeks’ notice, EasyJet (sorry Greta) was offering reasonable prices, so off I went.

Things didn’t get off to the most promising start, when I, along with a few hundred fellow passengers, was turfed off the airport train at Ostbahnhof and forced to transfer to another, empty train on the opposite platform. Hopefully DB aren’t picking up too many bad habits from their English subsidiary company.

My hotel was just off Wittenbergplatz, which I chose for its good transport connections to all parts of the city and definitely not because it is five minutes walk away from some of the best gay bars (ahem).

Seriously, though, Wittenbergplatz U-Bahn station lies at the intersection of four lines, so is an excellent starting point from which to explore the city. Sadly, the grand station building was wrapped in scaffolding.

It is also the home of Witty’s Organic Currywurst kiosk, reputedly one of the best places in Berlin to get some spicy sausage outside of a darkroom. Naturally, it was my first port of call after checking into my hotel. 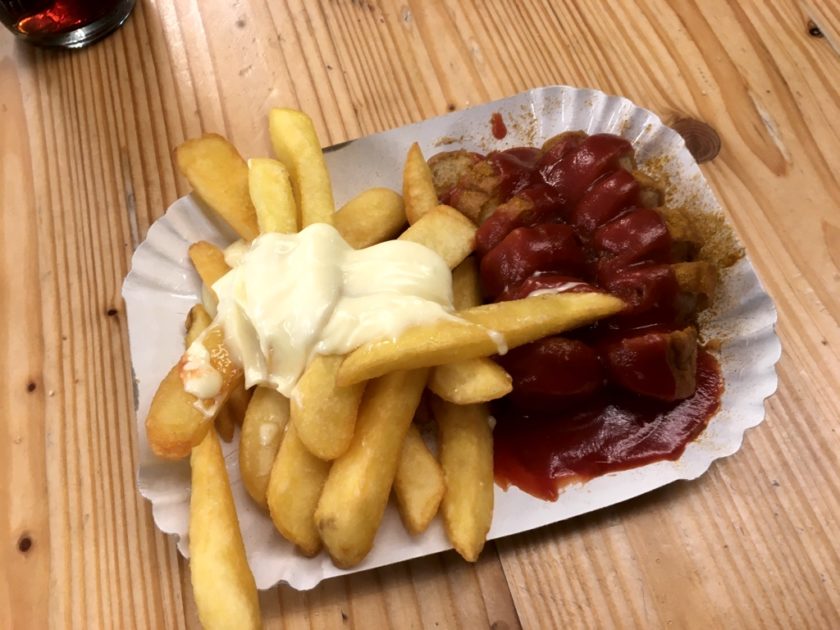 One of the big events of the Mauerfall celebrations was the installation of special video projections at six key sites around Berlin. I had only a vague notion of where some of the sites were located, but knew where the nearest U-Bahn station was, and hoped that, with judicious use of the maps app on my phone, would be enough.

The first location was at Breitscheidplatz, off the famous Ku’damm shopping street. Scenes of the events leading up to November 9, 1989 were projected onto the side of the Europa Center.

Descending into the U-Bahn at Zoologischer Garten, I travelled to Klosterstraße and walked from there to the Marx-Engels-Forum, where the Humboldt Forum across the river provided the canvas for the projections.

En route to the next site, I was pleased to see work progressing in earnest on the long-awaited extension to the U5 line. I was equally pleased to see that BVG have covered their construction hoardings with pictures of two men snogging on a train. 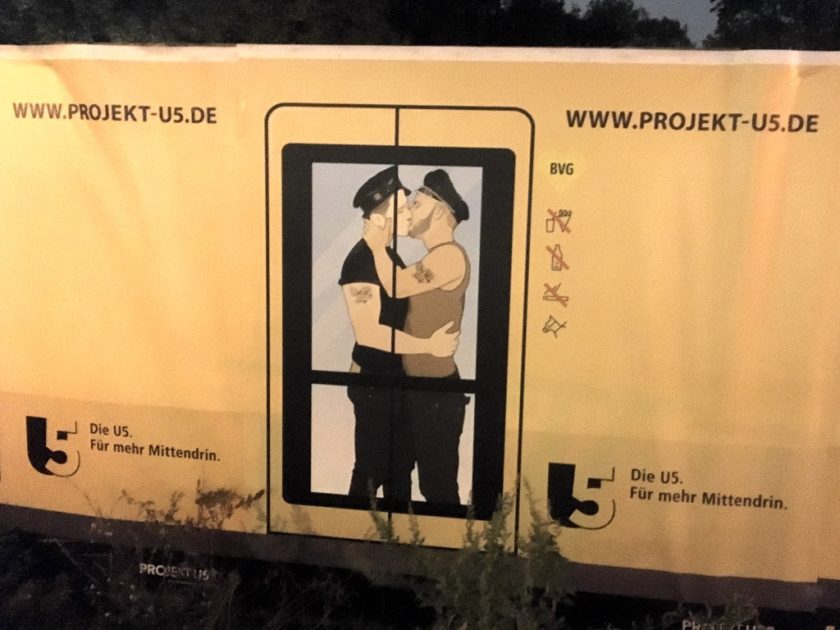 The U5 itself seems to be now branded as the “Freedom Line”, with labels to that effect in several of the stations I visited. I did wonder if the architects of the U5 extension had symbolism in mind when they were planning it. The U5 is the only underground line that operates entirely in the former East Berlin, and the new extension will take it across the former border, with stations at Brandenburg Gate (once a symbol of the divided city, now an iconic monument of united Berlin), the Bundestag (home of German democracy) and the new main railway station (built on the site of the Wall, in what was once No Man’s Land). 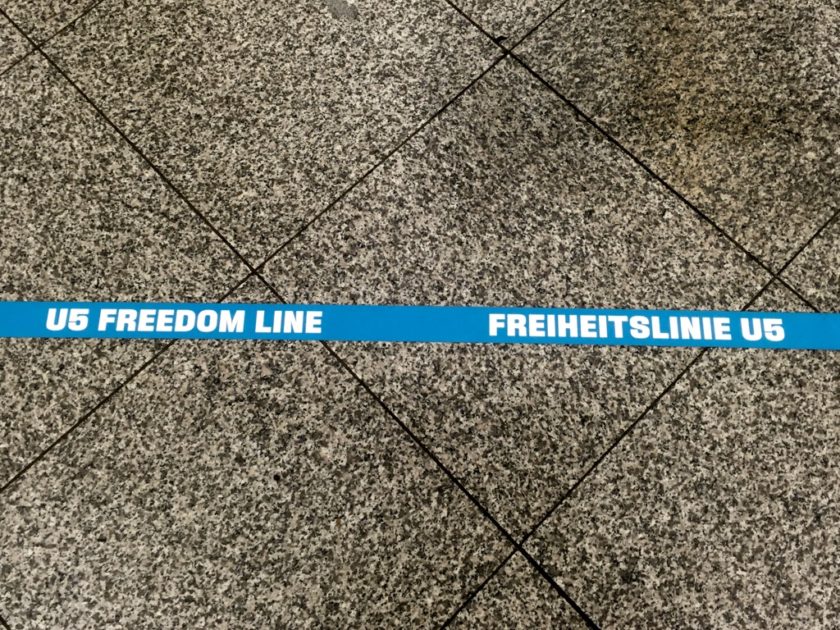 Next, I headed to the former headquarters of the Stasi, now a museum and documentation centre (which I visited on a previous trip). On the walls here, the light show remembered the victims of the old East German regime, who were imprisoned and tortured in the name of state “security”.

Next, I went to the East Side Gallery, one of the longest stretches of the Berlin Wall still standing. On one side, there is colourful graffiti art dating back to 1990. Annoyingly, building work taking place nearby meant that parts of the gallery were obscured by scaffolding.

On the rear side of the wall, the projected video showed an image of the wall coming down, revealing scenes of jubilation from the newly-reunited East and West Berlin residents.

I continued on to Alexanderplatz, the centre of what was East Berlin. A few days before the wall finally fell, a huge demonstration was held here as part of what became known as the Peaceful Revolution.

Thirty years later, it is a key location in the unified Berlin. Projected onto the C&A store were scenes of fireworks, I think from the official Unity Day celebrations which took place on 23rd October 1990.

The final stop was Gethsemane Chuch in Prenzlauer Berg. I was slightly delayed getting there; many U-Bahn stations have exits at both ends of the platform, and at Schönhauser Allee I managed to take the exit which was furthest away from the church, requiring me to double back on myself.

This projection commemorated the crucial role this church played in the protest movement in 1989, becoming a meeting point for opponents of the East German regime.

By now, the rain had developed into a steady drizzle. The projector beam illuminated the raindrops in the air, almost creating a work of art all by itself. 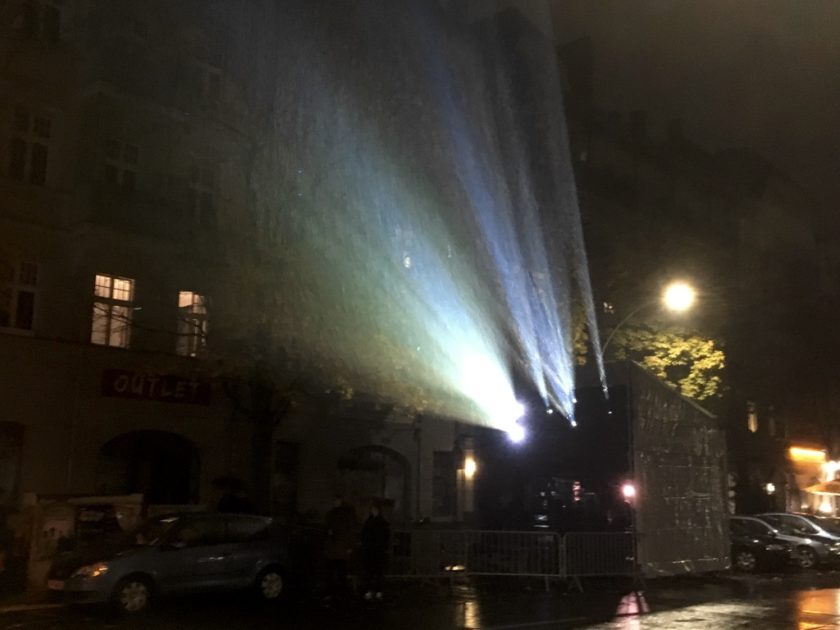 Each projection site was accompanied by a multitude of information boards, providing important background information and context. While I had deliberately gone out to see all the sites, it was obvious that some other people had just stumbled across them purely by accident, and were taking the opportunity to stop and think about the momentous events 30 years ago that weekend. 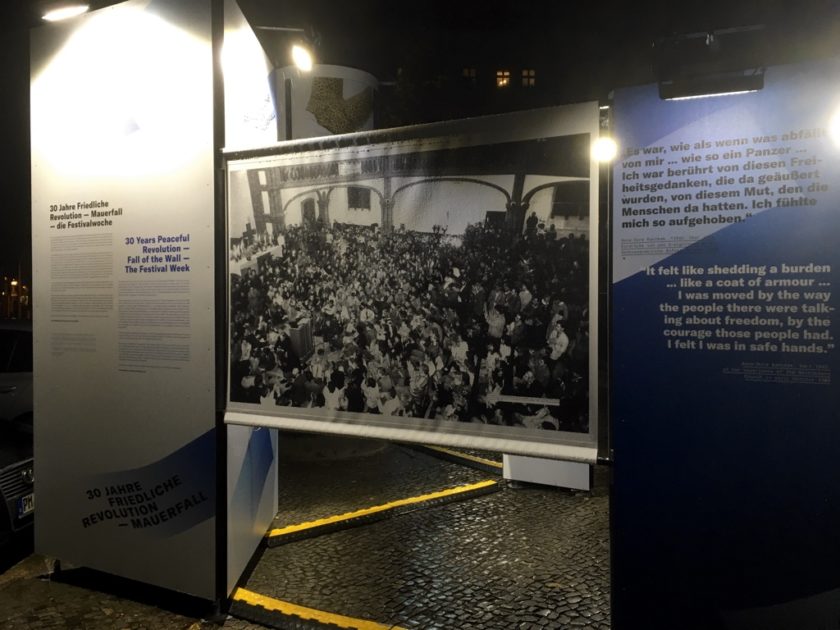 Overall, the artwork was an inspiring sight, and I was glad I made the effort to go and see them all. It definitely set the tone for the rest of the weekend; the Berlin Wall and its legacy would be a key component of this trip.