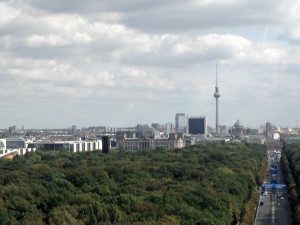 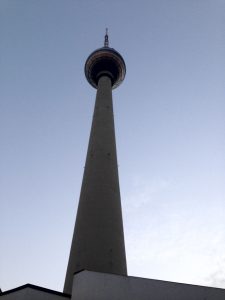 We were on the inner ring of the restaurant, so we didn’t have a super view over the city, but even so there was something strangely agreeable about eating dinner while slowly travelling round in circles. I couldn’t help but mourn the loss of Liverpool’s own revolving restaurant at St John’s Beacon.

The restaurant is pretty much what you’d expect – very tourist-y, slightly overpriced, but decent food. I treated myself to a plate of spätzle, washed down with some Berliner Weisse beer. Excellent stuff.

MONSTER RONSON’S ICHIBAN KARAOKE – on Warschauer Straße, just around the corner from the U-Bahn station, is this amazing club. It was hot, sweaty, and they were showing Ru Paul’s Drag Race on a big screen. Then, once the losing contestant had… (checks Wikipedia) “Sashayed Away”, a live drag show started, which seemed to involve all of the drag queens stripping, for some reason. I watched all this while swigging from a bottle of Club Mate.

I felt like a real Berliner, and that was before we rode the night tram in the wee small hours of the morning. Also, I got a hand stamp that said “PANSY”, which is accurate. 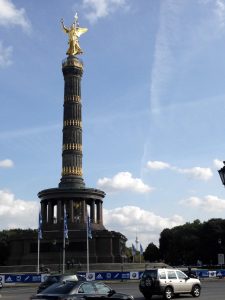 THE SIEGESSÄULE – The Victory Column stands in the centre of the Tiergarten, providing a focal point for this area of the city and offering views over the park and beyond from its viewing platform, 60 metres high.

Actually getting to the monument proved trickier than expected – the Berlin Marathon was taking place that weekend, and we had to navigate multiple road closures and security checkpoints to actually get to the building.

A short exhibition at the base of the column talks about the history of the site and other similar monuments worldwide. Then it’s up a narrow spiral staircase to the viewing platform. From the top you can see across the immense Tiergarten and beyond. It’s a great view, although you have to squeeze past fellow tourists to enjoy every angle. 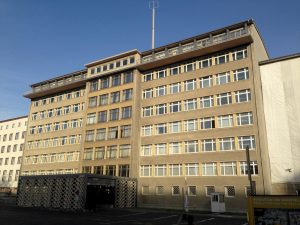 THE STASI MUSEUM – Located in a quiet suburb is this former headquarters of the feared East German Secret Police, which has since been converted into a museum and a memorial to those persecuted by the state between 1948 and 1989.

Guided by a French tour guide, and accompanied by an Australian woman who complained loudly about the lack of ventilation in the building on a hot day, we explored the building. Much of it is strangely banal office buildings with surprisingly plain furniture and it’s hard to imagine the terrifying state-sponsored oppression that was launched from within these walls.

I was especially interested to discover that the building had a paternoster lift (sadly no longer functional). I was also excited to spot various rooms which had been used for filming of seminal German drama Deutschland 83. I have touched furniture that has been touched by Jonas Nay, which means I have sort of touched Jonas Nay.

BOAT CRUISE – the River Spree flows right through the centre of Berlin, so a good way to see some of the central landmarks is by boat tour. I thought I was lucky getting a prime seat right at the front of the boat, until one of the deck hands started yelling at me in German. Only then did I notice the sign “Kein Sitzplatz!” right above where I was sitting. I was blocking the forward view of the captain, which I guess is kind of a problem when you need to steer a boat. Oops.

The river offers a different angle on some of the historic buildings, including Hauptbahnhof, the cathedral and the Reichstag (above). The tour only lasted an hour or so (longer ones are available), with a pre-recorded commentary in English and German. There was an annoying group of students who seemed more interested in giggling and looking at their phones than the actual tour, but apart from that, it was an enjoyable journey.

OBERBAUMBRÜCKE – a gorgeous double-deck bridge that carries U-Bahn and pedestrians across the River Spree. For many years, during the division of the city, it served as a border crossing. The bridge was restored and the railway line reconnected in 1995. 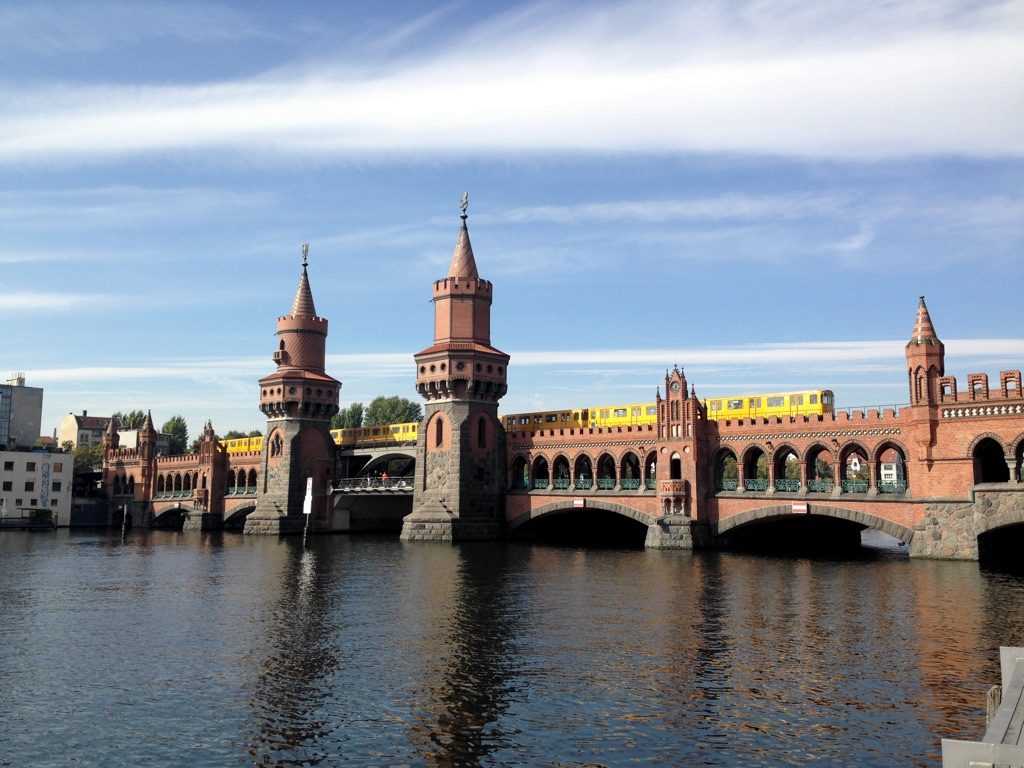 GERMAN HISTORICAL MUSEUM – Turns out, there’s a lot of German history, and this museum is huge. It’s a must visit, especially for any dreary English people whose “knowledge” of Germany begins and ends with World War II.

I tried to do all of it, but after a couple of hours hunger pangs led me off in search of some lunch. A return visit will definitely be necessary in the future. 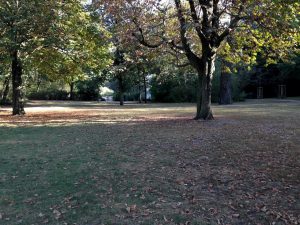 VOLKSPARK FRIEDRICHSHAIN – I always make a point of loitering in some residential areas of Berlin, largely because I like to imagine where I would live if I were a cosmopolitan economic migrant.

On my final day in the city, I had a couple of hours to kill before I headed to the airport, so I ventured into this park in the eastern side of the city.

It’s a lovely public space – it’s more compact than the Tiergarten, but I think I preferred it. It’s slightly outside the main touristy area, so there were fewer sightseers and more locals. I wandered around, taking in lakes, fountains and greenery. Then I sat on a bench for a while and enjoyed a moment of serenity.

Also, there were a load of shirtless men playing volleyball. Ahem.

CEEFAX – Yes, really! Teletext is still a thing in Germany, and my visit coincided with the 42nd anniversary of Ceefax, which ARDtext decided to celebrate with some pixel art of the BBC’s Mort Smith, which I could view at leisure on the TV in my hotel room.

SCHÖNEFELD AIRPORT – once described by a Twitter user as “not an airport, it’s a corridor with an Irish pub at the end.” It’s still a dump, sorry. It didn’t help that everyone in Berlin appeared to be trying to catch a flight at the same time, so it was ridiculously crowded (I couldn’t get a seat in said Irish pub). Wither Berlin Brandenburg? 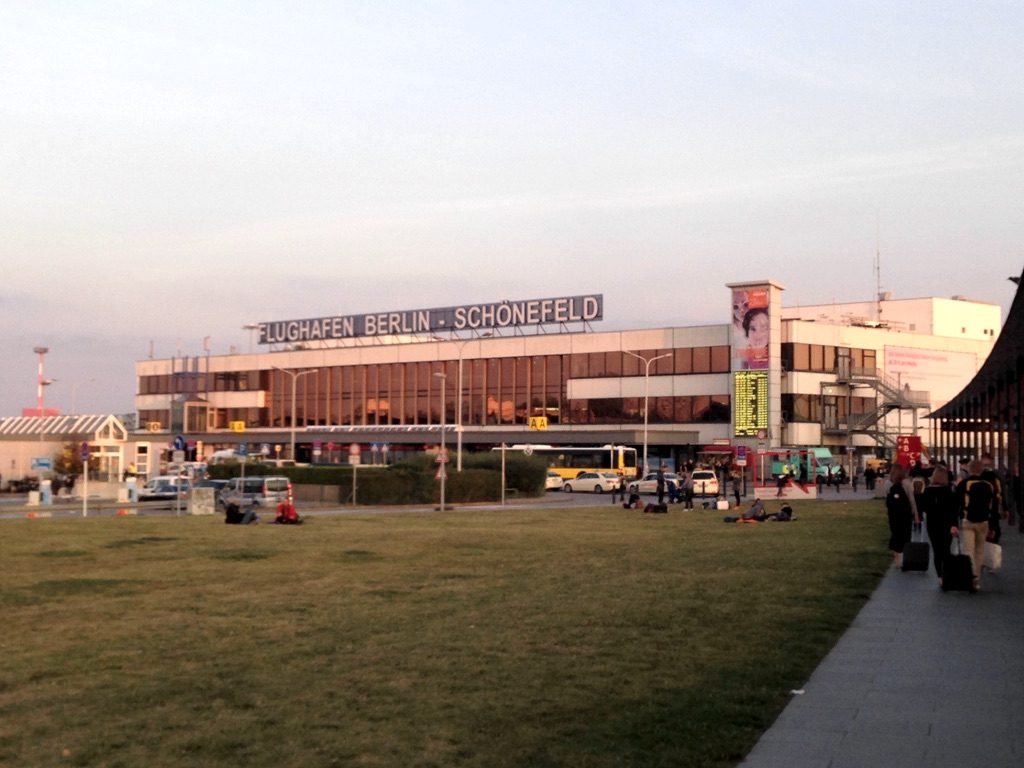