As mentioned in my previous post, I stopped off in Cologne for a couple of days en route to Berlin. So was my visit a success, or was it a North-Rhine-WestFailure? If that appalling pun hasn’t put you off, read on to find out…

THE ENGLISH SHOP – after eating at the Hard Rock Café (shut up, I was tired and it was open and convenient), I headed back to the hotel. En route, I passed The English Shop, whose TfL lawyer-baiting logo had a poignant improvised addition: “Britain might have left the EU,” it said, “but we’re still here. So a little part of Britain survives in the EU!” 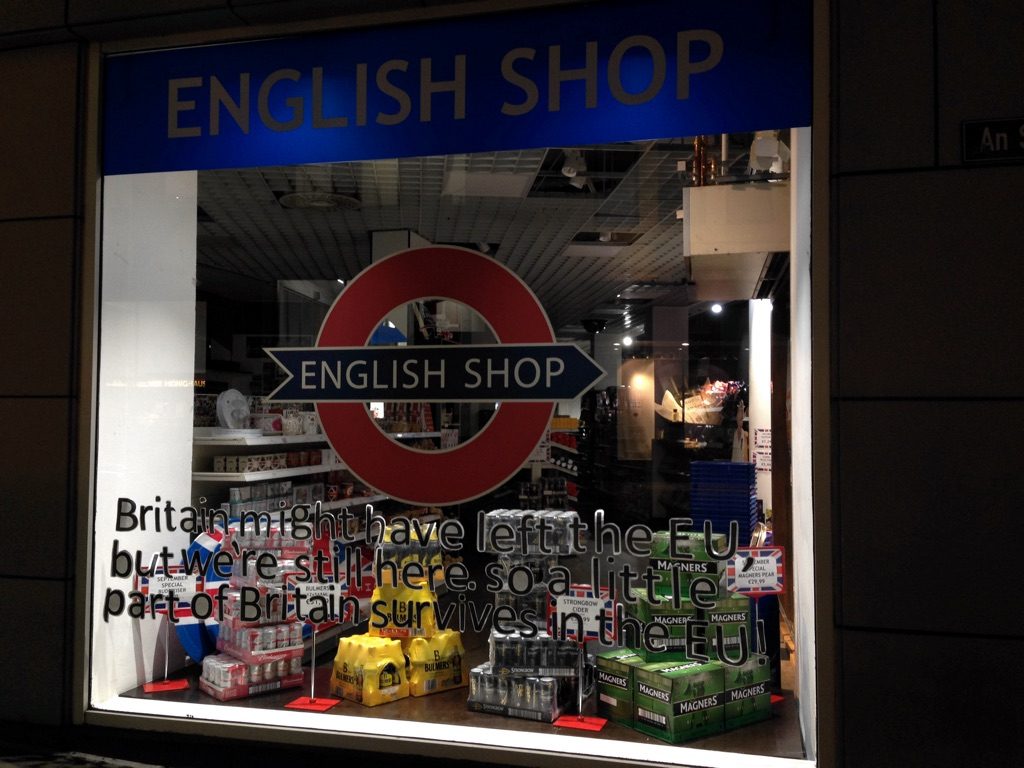 For someone who was (and still is) grieving the tragedy that is Brexit, this was a bit too much, and I returned to my hotel feeling gloomy.

KÖLNCARD – Next morning I set out to explore the city. I had only one full day, so wanted to make the most of it. I had read about the KölnCard – a tourist ticket offering free public transport and discounted admission to a host of museums. The tourist information website informed me that it was available at “many Cologne hotels”, so I confidently went to the front desk of my hotel – the excellently named Hopper Et Cetera – and asked for it.

I trudged back to the tourist information centre, which was right next to the railway station – I kicked myself for not picking up a card yesterday when I had the chance. Card purchased, all I had to do was validate it with a datestamp before using it. I’m familiar with validating tickets – it’s quite common in Germany, and many parts of Europe, to buy a ticket and then insert it into a machine to date stamp it before its valid.

Cologne’s main transport system is the Stadtbahn – a hybrid underground/tram system. In the city centre the lines are mainly underground, but further out there are street running light rail sections. It’s a nice idea, and one that the UK is borrowing with its tram-train experiment in Sheffield. 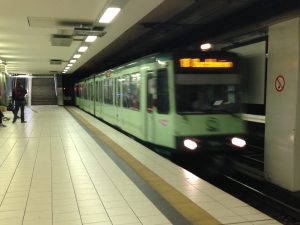 One other difference is that the stamping machines are on board the tram-trains, rather than in the stations. I headed into the bowels of Hauptbahnhof to the underground station, and hopped on a train. The validating machine was right next to the entrance door. I inserted my ticket and… nothing. No clunk, no ding, no stamp. I dashed to the other end of the tram, where there was a second machine. A strange whirring noise, but no mark on the ticket.

I panicked and got off at the next stop. Rather than risk another train, I walked back to Hauptbahnhof (fortunately not a great distance), headed to the S-Bahn platform, stamped my ticket there, and then went back to the underground to try again. Bah.

KÖLNISCHES STADTMUSEUM – Finally I reached my intended destination, the Cologne City Museum, where the city’s history is traced from medieval times to the present day. Most of the exhibits are labelled only in German, but an audio guide is available with English commentary. An interesting and agreeable way to while away an hour or so.

FREEWALK COLOGNE – Next, I headed to Eigelsteintorburg, the starting point of Freewalk Cologne. Most cities now have free walking tours, and Cologne is no exception. They’re a good way to see a lot of places in a short space of time.

Our cheerful Cologne native guide was happy to expound about the wonderfulness of the city, showing a side that the official city museum perhaps didn’t show. He described the madness of the annual carnival, and the unfortunate case of the Cologne City Archives, which survived World War II intact but were severely damaged in 2009 when the building collapsed into a new tunnel being built underneath.

We also saw the strange sight of an underground car park built around Roman ruins. The car park was built in 1969 on top of what remained of the city’s Roman wall, so you can park your BMW right next to a site of archaelogical interest. 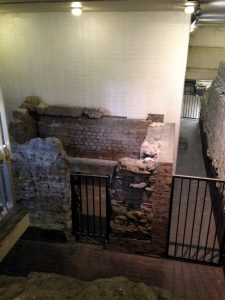 We headed to the main square and into Cologne cathedral itself. “I can’t talk to you in there,” our guide explained, “because we’re not supposed to take guided tours in there.”

We walked silently around the cathedral, not acknowledging each other. Seeing inside was definitely worth this bending of the rules. It is a beautiful building, and phone camera pictures simply cannot do it justice. I got so wrapped up in taking pictures I lost sight of the group. I found them outside a few minutes later, waiting patiently for me. Sorry.

I can’t remember all the details of the tour, but was very interesting, and we finished in a pub, which was even better. I willingly handed over the €10 tip at the end.

BOAT TRIP – Next, I headed to the nearby pier for a river cruise. An hour cruising up and down the Rhine, with a pre-recorded commentary. The weather was nice, and there was lots to see on the banks of the river. My only real regret was that I wasn’t going to have time to see any of it up close. 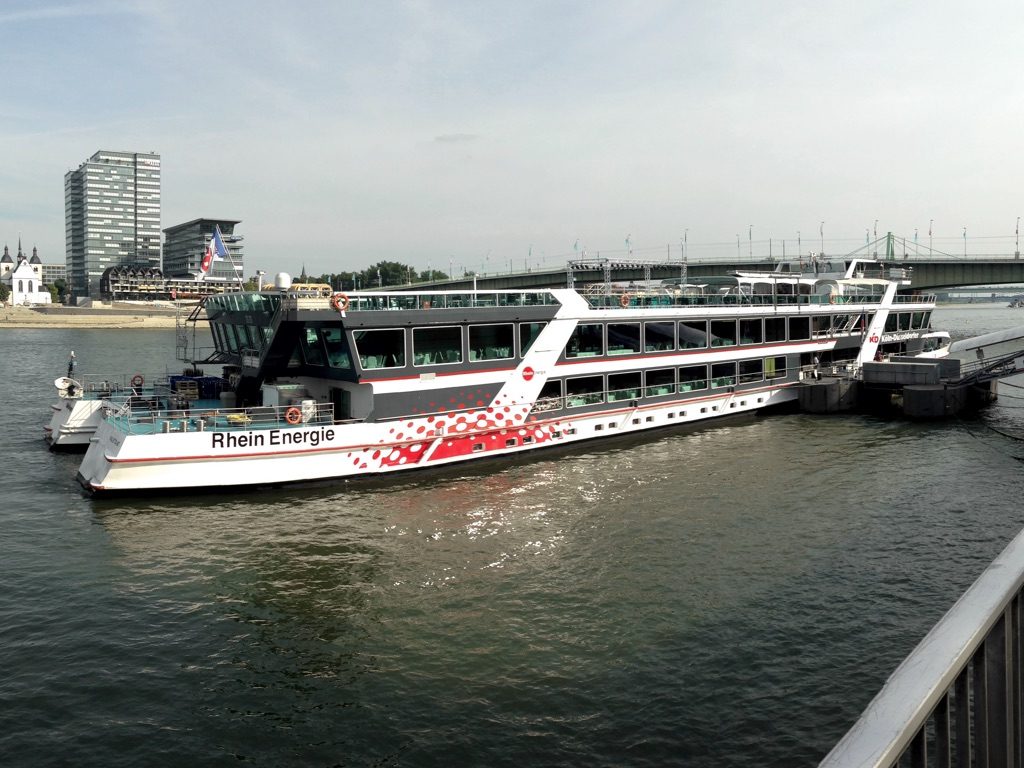 I had hoped to go for a ride on the Cologne Cable Car (Seilbahn), but it closes at 6pm and I wasn’t going to be able to get there in time.

I did travel up to Mulheimer Brücke, where I was able to get a view back down the river to the town centre as the sun set. 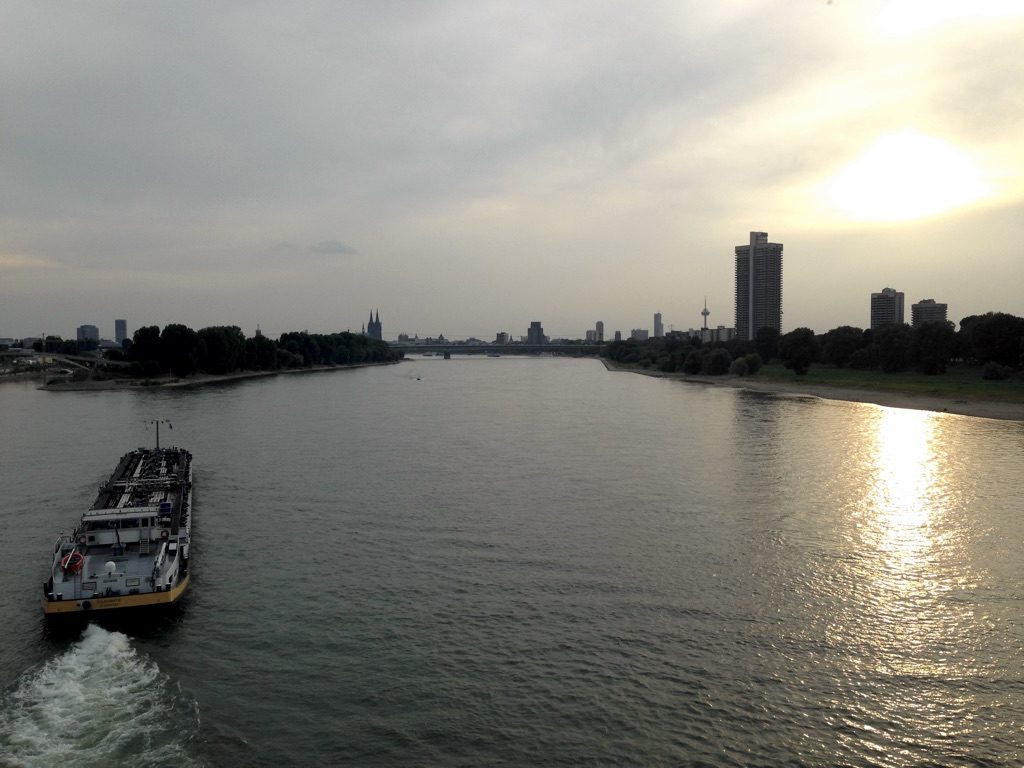 It was getting late, and I ventured back into town. I searched around for a while to find somewhere to eat, and settled on some Wurst from a café in the Alter-Markt. Nothing like a big sausage to end the day.

Is it my imagination or are Cologne sausages bigger than Berlin sausages?