Sightseeing time! Time to look at some of the key locations in central Berlin. Places such as Potsdamer Platz – for years a No Man’s Land bisected by the Berlin Wall, now a thriving centre of crass commercialism with skyscrapers all around. What would Walter Ulbricht have thought? 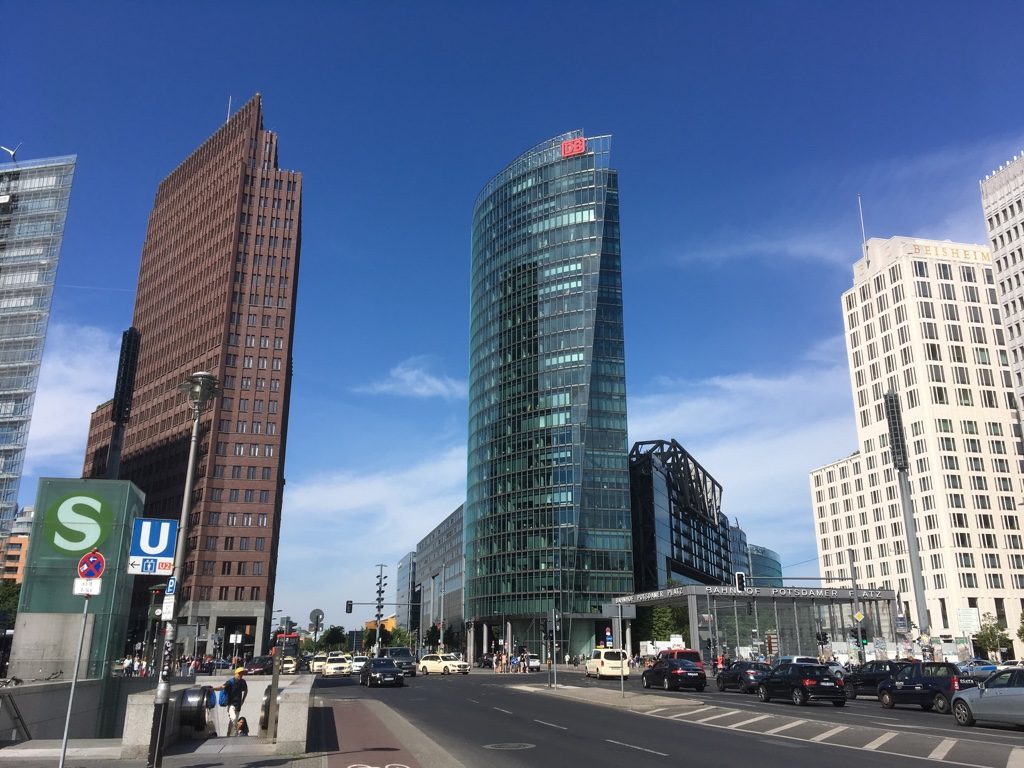 A short walk away, the imposing Brandenburg Gate still stands as a symbol of Berlin, as well as a magnet for tourists. 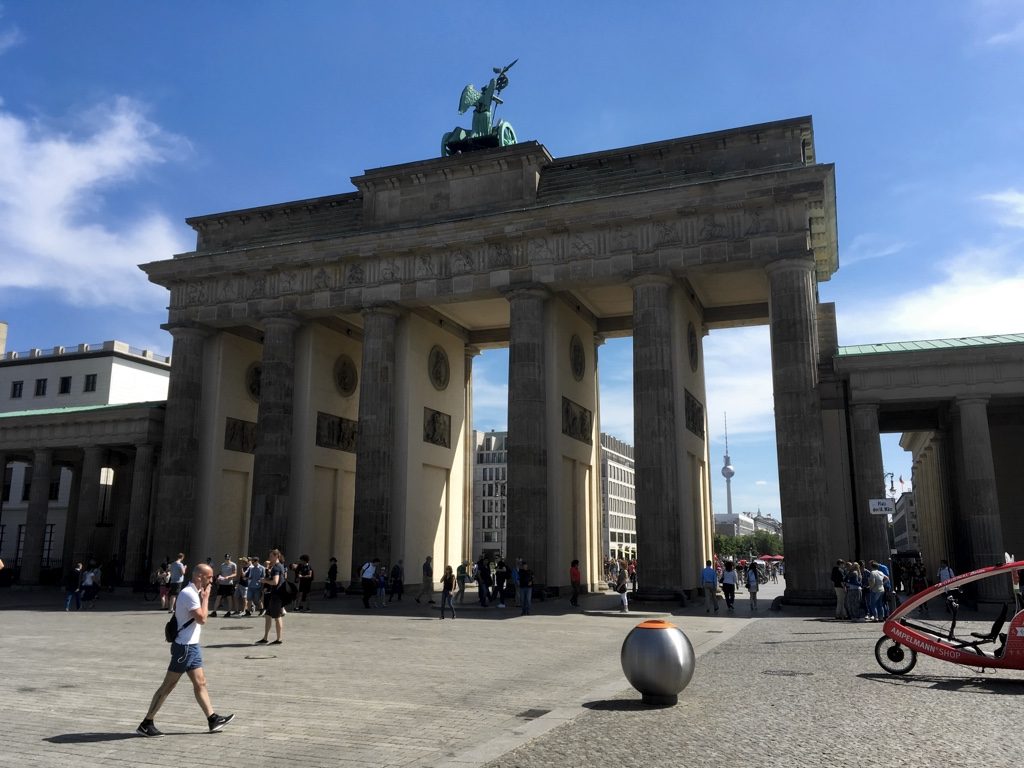 I made a point of paying my respects at the Memorial to the Murdered Jews of Europe, and the adjacent Memorial to the Homosexual Victims of Nazi Persecution – two reminders of this city’s role at the centre of turbulent 20th century history.

A short walk through the Government district, via the Reichstag, and I was at Berlin’s palatial main station, Hauptbahnhof. I had two choices to continue my journey: either hop on the U55, Berlin’s miniature, 3-station underground line, and retrace my steps to the Brandenburg Gate, or a ride on the Stadtbahn through the city centre.

I choose the latter option, largely because it gave me the chance to enjoy the glorious interior of the station, a palace showcasing all that is great about modern European rail travel. I did regret my decision later – after returning home, I discovered that a few days after my visit, the U55 closed for six months of refurbishment work, so this may have been my last chance to ride it in its current form. Oh well. 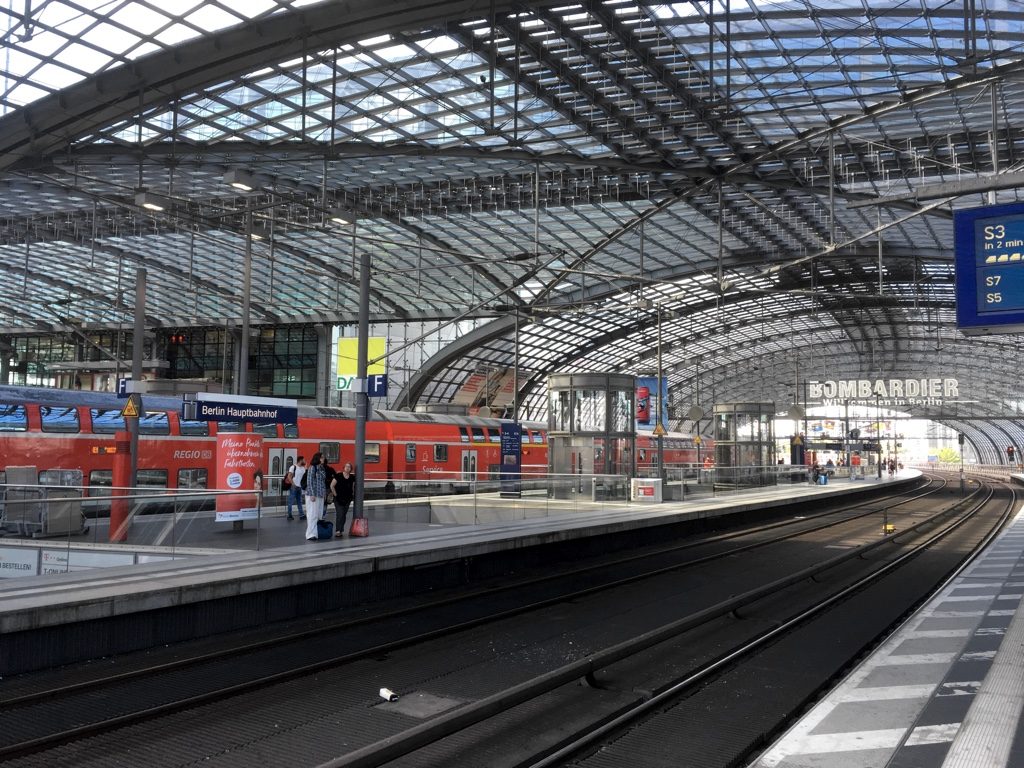 I alighted at Tiergarten station and headed into the park of the same name. Tiergarten is a giant public park in the heart of Berlin, an oasis of calm greenery, surrounded by the hustle and bustle of the city, yet somehow distant from it.

One thing I didn’t know is that the Tiergarten has a museum of gas lighting, with samples of classic gas street lights from all over the world installed and in working order. Midday on a blazing hot summer day, unfortunately, was not the best time to see it. 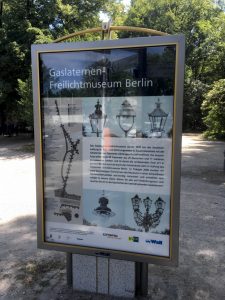 I never told you there was a museum of gaslighting there, you can’t prove that I said it.

Heading towards the Siegessäule monument in the centre of the park, I couldn’t help but notice that certain users of the park were distinctly… unclothed. Yes, I had found the famous FKK (naturist) area.

I have encountered nudism before when I visited Oslo and Gran Canaria. Dare I try again?

I hesitated for a moment, then threw caution to the wind. I found a suitable spot, then kicked off my shoes – and everything else. 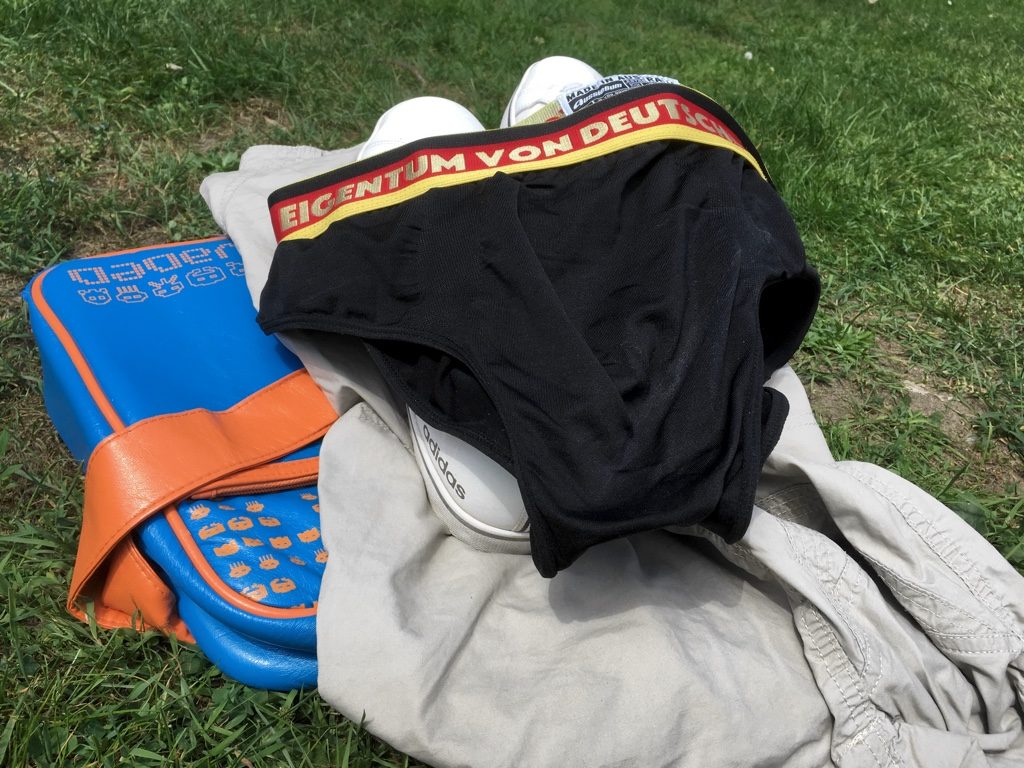 The sun was blazing fiercely overhead, so I didn’t dare to linger too long, lest certain surfaces – unaccustomed to exposure to sunlight – burst into flames. I also managed to park myself on a patch of grass which had lots of ants crawling around. Still, it was a remarkably liberating experience.

Yes, I took a selfie while I was there. No, you’re not getting to see it.

I returned, fully clothed, to Tiergarten station. On my next train, I encountered, for the first time ever, the fearsome S-Bahn ticket inspectors. Well, I say “encountered” – before they got to me they homed in on some unfortunate youth who not only had no ticket, but no ID to proffer. The piercing yell of Kollege! went down the carriage, and a second inspector turned up to march the poor lad off the train at the next stop. 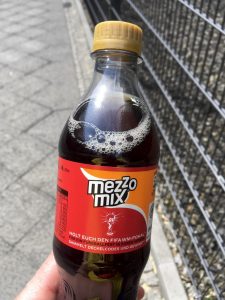 After lunch, and a pause to guzzle the first of many bottles of Mezzo Mix (seriously, why is this lovely orange/cola combination unavailable outside Germany?) I headed for the Mauermuseum. Located on Friedrichstraße, adjacent to the former border crossing at Checkpoint Charlie, this museum was originally opened in 1963 to educate people about the realities of live in a divided city. Since the fall of the wall, it remains as a record of the struggles of that time.

The museum is big, split across two floors and multiple rooms, it occupied a good few hours of my time and I tried to see everything. Photography wasn’t allowed inside but there were a great many artefacts from the Cold War era, and some remarkable examples of ingenuity from East Germans desperate to escape, including a car which had its chassis modified so a person could fit into it.

One slightly bizarre exhibit was the section dedicated to Ronald Reagan, festooned in American flags and lionising the former President. His role in the fall of the Berlin Wall can be argued, and his “Tear Down This Wall” speech is remarkable, but it rather overlooked his other failings, notably his response to the AIDS crisis.

I tweeted about this and attracted the attention of the museum’s official Twitter. Awkward.

The Berlin Wall Museum was interesting, although could have done without the Ronald Reagan exhibit which praised him unconditionally. 😕 pic.twitter.com/wOi3uHQsTG

Many of Berlin's streets, schools and squares bear names of great men&women.Monuments of all shapes&sizes testify to the achievements of these individuals. In all the naming&commemoration only one person has been forgotten-President Reagan, the man who gave us FREEDOM and UNITY

On the lighter side, the museum were giving out free copies of the Berliner Morgenpost, and that day’s edition contained the wonderful news that Berlin is about to build hundreds of kilometres of new tram lines. 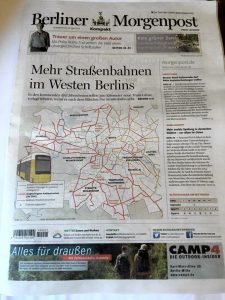 Incidentally, right next to the site of the former wall – that fearsome structure erected to keep out the capitalist west – I was amused to see branches of McDonalds and KFC.

Having splurged on €50 worth of tat in the museum gift shop, it was back to the hotel for a brief respite, and to watch the German version of The Chase.

Heading out on the town later that night, I was pleased to meet up with James, whom I have been following on Twitter for a while now. He’s a British guy working in IT who has relocated to Berlin, so he’s basically living my ideal life.

Helpfully, the bar he suggested to meet up in – Prinzknecht – was right underneath my hotel, so it was a walk of zero minutes. I still managed to arrive a couple of minutes late.

After a few drinks there, we headed down the road to Woof, described as “The No.1 place for hairy men, muscle bears, chasers & admirers in Berlin”. I am possibly one of those things, and normally this sort of place would intimidate me slightly, but James is a regular and was able to engage in a nice chat with the barman.

We stayed out until after midnight and probably had a little bit too much to drink (slight sympathy for James, who had to work the next day). But it was a fun evening, and a great way to round off my first full day in Berlin.