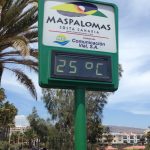 Anyone who knows me will know that my usual holiday of choice is a city break, gallivanting around a European city (often Berlin) clutching a guide book (to Berlin) and visitor discount card (a Berlin Welcome Card). I usually measure the success of a trip by the number of quirky museums I manage to visit. A beach holiday was something different, something I’d never really done before. I wasn’t quite sure what to expect.

The island of Gran Canaria is just about on the same latitude as the southern tip of Morocco. That means it’s blessed with a warm climate (20-25C all year round). It also means it’s a long flight – roughly four hours, a bit of a challenge on a standard EasyJet plane. I was able to pass the time by chatting to Mark and Peter. Mark and Peter were less fortunate, as they had to talk to me.

That was a LOOONG flight. ?

One problem with writing a blog post 18 months after the event is that details have been forgotten. With that in mind, here are the highlights that do stick out clearly in the mind.

THE HOTEL – After a long flight, I was glad to check in to our hotel; the Sentido Gran Canaria Princess. It is a 4-star hotel with air conditioned rooms, huge comfortable beds, a swimming pool, bar and breakfast buffet. Indeed, the only glitch during the stay was that water started dripping out of the air conditioning unit one afternoon – the hotel’s solution was to send a burly man in to bang a pipe back into place with a hammer.

THE HAWKERS – Heading out for a stroll to get my bearings, I was struck by how… er, “eager” some of the locals were to do business. Stop to read an information board on the beach and you will be approached by a man trying to sell sunglasses. Walk past a restaurant and someone will try to grab you. Go into a shop and an assistant will appear at your side to show you T-Shirts, and they won’t accept “just browsing, thanks” as an answer. I soon learned that you need to be polite but firm with these people. Then, after a while, I just started being rude and firm.

THE BEACH – we were within walking distance of the Playa del Inglés, but a little further on revealed miles of less crowded, unspoiled sand dunes. It was wonderful.

It took a few days before I found the nudist beach. I had ventured down there alone, and my visit hadn’t exactly been planned; I had to content myself with 2 minutes of splashing around in the salt water, before quickly returning to the sand to make sure my belongings hadn’t been stolen. I failed to apply sunblock to all the required areas, so I got burned in places that had never been burned before.

Sunburn has reached the "peeling skin" stage, which at least gives me something to do on the plane journey later.

THE GAYS – When the sun goes down in Maspalomas, the gays come out. The LGBT scene is centred on the Yumbo Centre, ostensibly a shopping mall but in reality an amazing hodge-podge of gaudy gay bars. Imagine Runcorn Shopping City, if it had a gay sauna and cruising bar. There was also a group of gymnasts who set up in the central square and put on a show of cartwheels and pirouettes, all while shirtless. Which was nice.

Special mention to the go-go dancer in Construction Bar who showed immense staying power while gyrating around a pole wearing only a jock strap. Later, while on his break, he came over and talked to us, and I’m afraid to say I got so tongue-tied by his beauty I could barely stammer out a reply. What is the etiquette when talking to a nearly-naked man?

THE FOOD – there’s a plethora of English cafes who will do a full English fry up every day, if you’re boring enough to want that. In the Yumbo Centre we paid several visits to Martel House. I ordered the mixed grill there, which was enough to feed four people. Elsewhere there was a restaurant that served pineapple rice, in an actual pineapple. IMAGINE.

Not that I didn’t dip into Spanish fare. At a restaurant named “San Diego”, I ordered rabbit paella. Our table had a view into the kitchen, which meant I could watch as the chef pulled a rabbit out of the fridge and chopped it up. It would have been a vegetarian’s worst nightmare, but the end result was very pleasing.

Rabbit paella. Thank you for your sacrifice, Bugs Bunny.

Less exotically, I spent one lunchtime standing in a queue at a beachside McDonalds, behind a man whose buttocks were about to fall out of his Speedo. 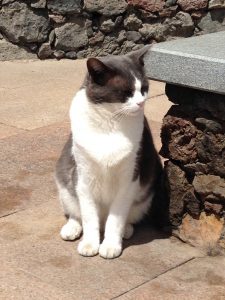 THE CATS – they’re everywhere on the island. There were even several hanging around the hotel pool, an unexpected bonus while I lay on my sun lounger.

Something happened while I was there. I think it was around the third day of the holiday. I was lazing by the hotel pool, a parasol strategically placed to keep the sun off my face.

My initial trepidation about going away for a week had disappeared. My usual sources of anxiety: supporting barely-functional office IT equipment, impending Open University exams, the general stresses of 21st century life, faded away. For the first time in a long while, I relaxed. I was happy.

It all added up to a wonderful week, in the company of good friends. I came home feeling refreshed and relaxed by the much-needed break. I will definitely be back, if only to take more selfies in dimly lit bars. 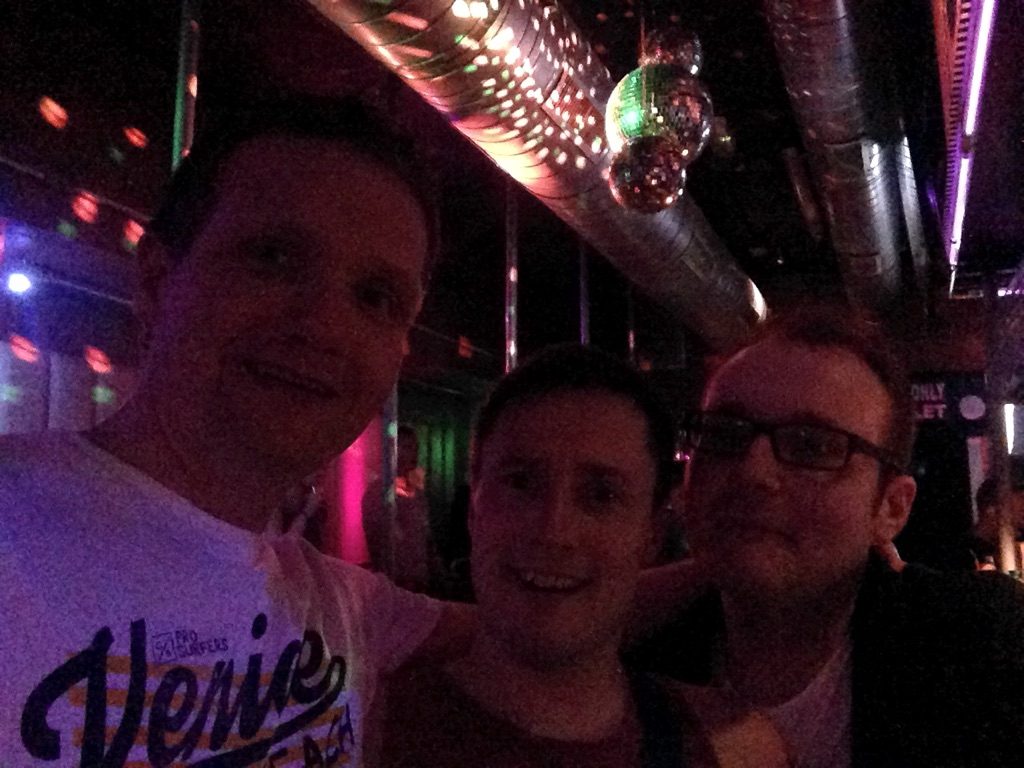