I headed straight for the ticket office at Trondheim Sentral and enquired about the sleeper train to Bodø.

“They are all cancelled this weekend,” said the friendly woman on the information desk. “Engineering work is taking place.”

So this ticket I have, is for a train that does not exist?

“Yes, you will need to take it up with your booking agent.”

I rolled up my proverbial sleeves and dialled the travel agent, thankful that my mobile provider still offers European roaming at no extra charge.

There was a long phone call, which involved extended periods on hold. The woman at the travel agent was very helpful and apologetic, but could only come up with one option: instead of the sleeper train, I would be on a rail replacement bus departing at 8am and taking 11 hours to reach Bodø.

To be fair, they also arranged an extra day’s hotel stay in Bodø, but on the downside, I would have almost no time in Trondheim. I would have to leave early the following morning, rather than spending most of the day there and leaving by train in the evening.

Feeling a bit dejected, I headed to the hotel, just a short walk from the station, and checked in. I paused for a cup of tea in my room, before I headed out again, to get a bit of a glimpse of the city. A few hours in the evening would have to do. 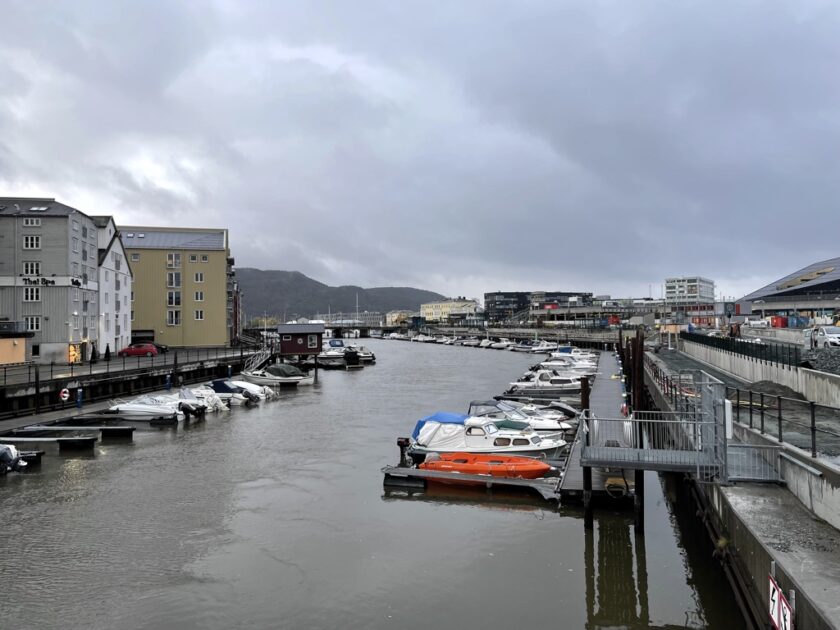 Trondheim Sentral is located on the northern edge of the city centre, near the harbour. There is plenty of docks and industry around, but also signs of regeneration and redevelopment, bringing in plush new offices and facilities.

I followed what Google Maps told me was the most direct route into the old town centre, which took me along a noisy dual carriageway and under the railway line in an underpass that was on the verge of flooding.

I wasn’t too encouraged, but I’m glad I persisted, because Trondheim old town is lovely, with lots of handsome buildings.

Here is the Vår Frue Kirke (Our Lady Church) 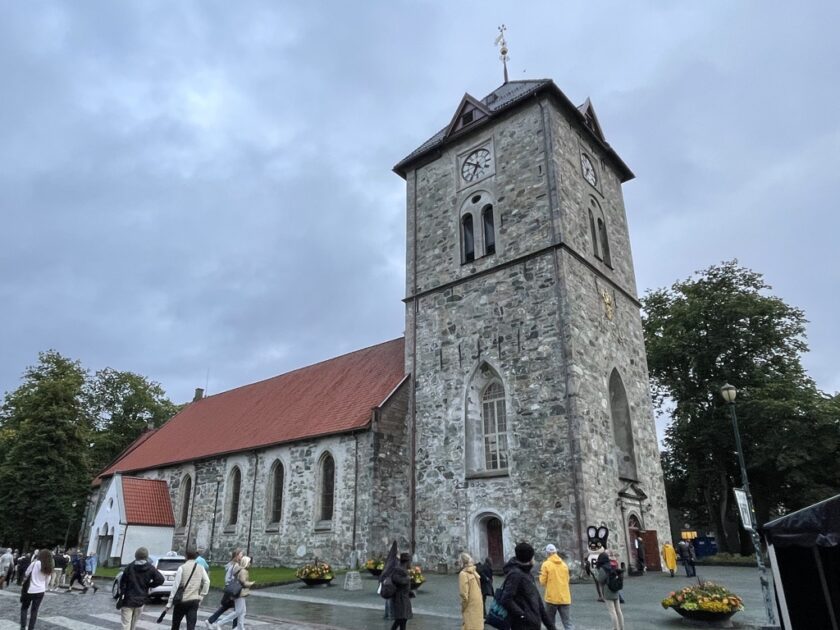 Nearby, a statue of Hjalmar Andersen, record-breaking speed skater and Olympic medalist. 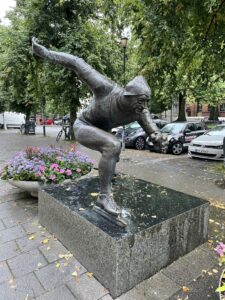 The city was busier than I expected, and the main square was bustling. There were market stands and a stage being set up for performances. I hadn’t known about this in advance, but the evening I visited just happened to be Kulturnatt, a special evening of cultural events, taking in many of the city’s venues. 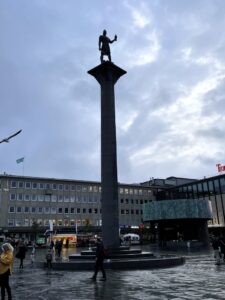 I hadn’t really done much research and was caught off guard a bit. I made a mental note to return to the square later for some food from some of the street food vendors that were setting up, and then headed off for a walk around town.

The cathedral was open, offering a free concert. I decided not to go in, assuming that it would be all in Norwegian. However I did enjoy the views from the outside.

Near to the cathedral, the Trondheim art museum had not got the memo about Kulturnatt and was definitely closed for the evening. 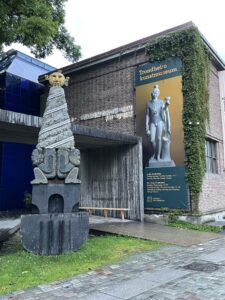 Truth be told, I wasn’t really in the mood for anything like that. I was still annoyed about the train cock-up, and worried about my rail replacement bus tomorrow. I’m not sure if a black cloud was hovering over me as I walked across the Old Town Bridge, but I wouldn’t be surprised. 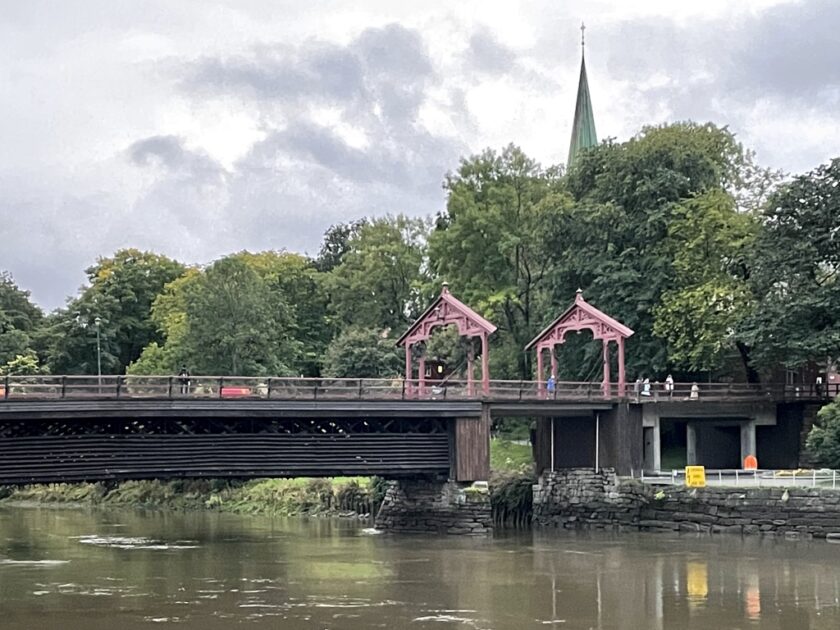 I was tempted to turn tail and head back to my hotel right then, but I decided to visit one more place before calling it a night. Some cursory Googling earlier had informed me about Kristiansten Fortress, a 17th century construction on a hill overlooking the town. It would be closed, but at least I could see it from the outside, and enjoy the views of the town below.

I started heading towards the castle, which involved walking up Brubakken, an extremely steep street. I wished I had a cycle with me, because this is the home of the Bicycle Lift, an amazing contraption which assists cyclists up the incline.

Unfortunately, there were no cyclists around, and so I did not get to see it in action. I have subsequently seen a video of it working, and it looks amazing, if a little hazardous.

With no cycle in tow, I had no choice but to walk up. Forget the Stairmaster at the gym, this is the way to get my steps in. I reached the summit in a slightly sweaty mess.

At the top of the hill, I walked through quiet residential streets. Google Maps assured me this was the correct route, but I became increasingly unsure, and was fully expecting some angry Trondheimer to accost me, demanding to know why I was walking past his house.

The climb to the summit was worth it. The fortress itself wasn’t particularly interesting, but the views were pretty. It was twilight and the city below was starting to light up for the evening. 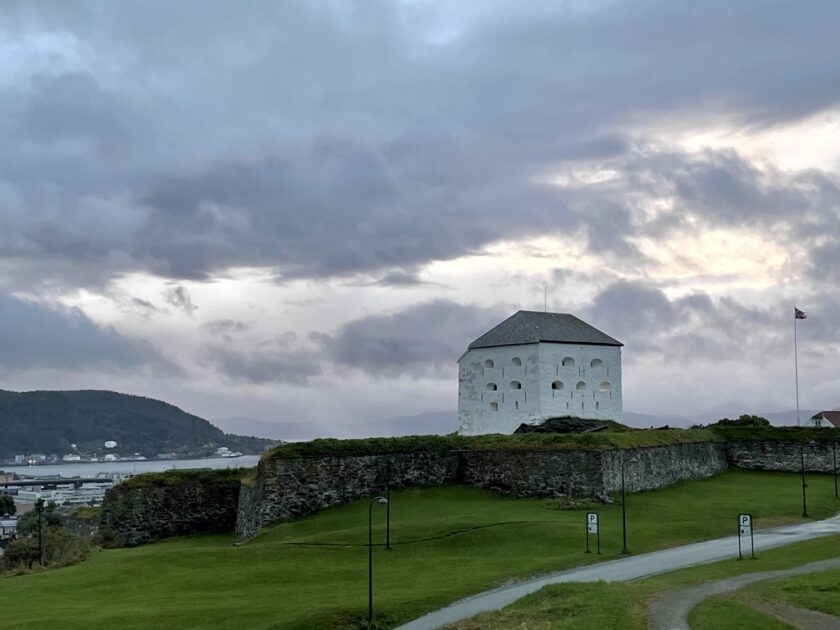 I took a few moments to catch my breath and appreciate the quiet night and peaceful surroundings. There had been a bit of a blip on the journey, but I was still in a beautiful place, seeing new sights. 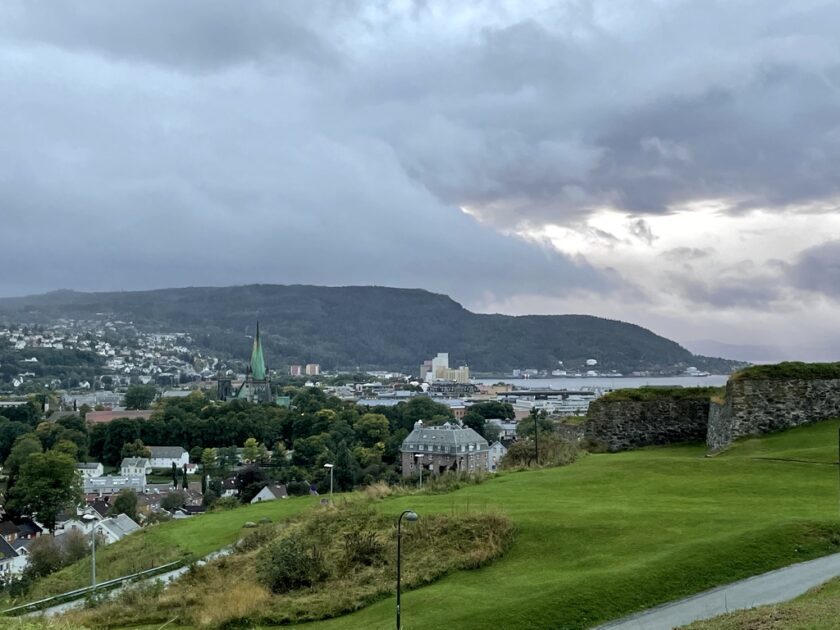 The walk back downhill wasn’t as taxing as the walk uphill, although I nearly tripped over my own feet when going back down the steep Brubakken.

I walked back along cobbled streets (albeit with a smooth-surfaced cycle lane added), stopping at one point at a viewpoint next to the river. 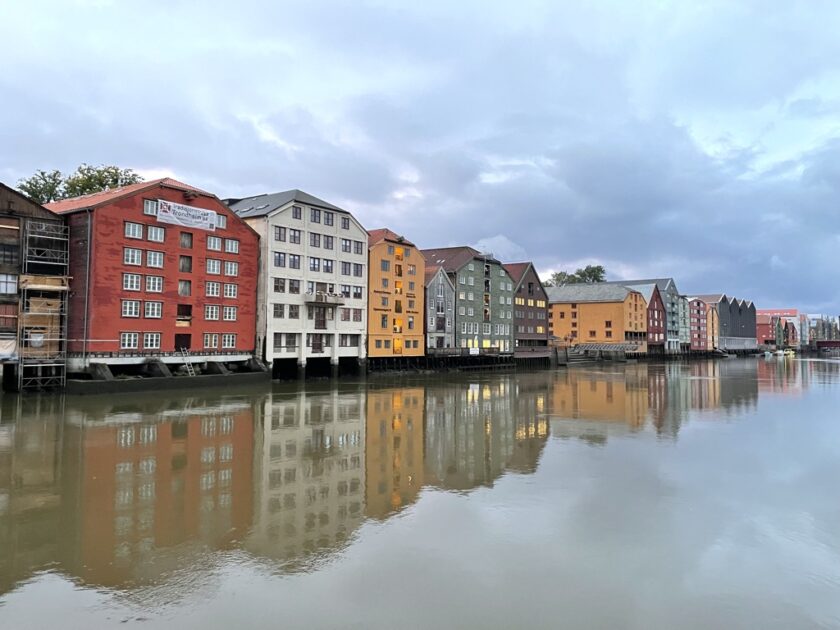 There were several charming looking restaurants that I’m sure would have welcomed my business, but I still wasn’t in the mood. I wanted something quick and simple, and really couldn’t face a restaurant that night. 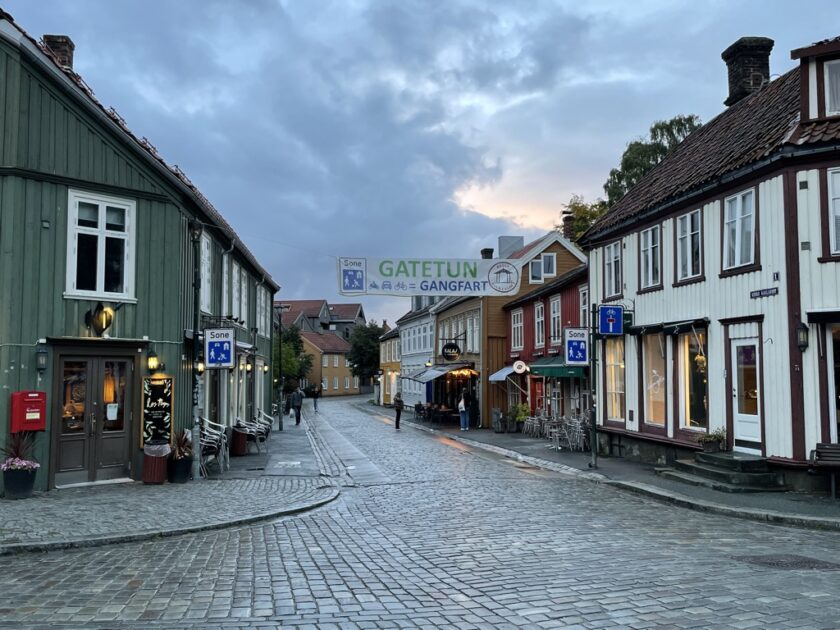 I wandered back to the square, but most of the food trucks I had seen earlier were in the process of packing up. Instead, I retreated to the nearby McDonald’s. I ordered a Jalapeno burger, which is not available on the menu back home, so I think it still counts as sampling local cuisine. 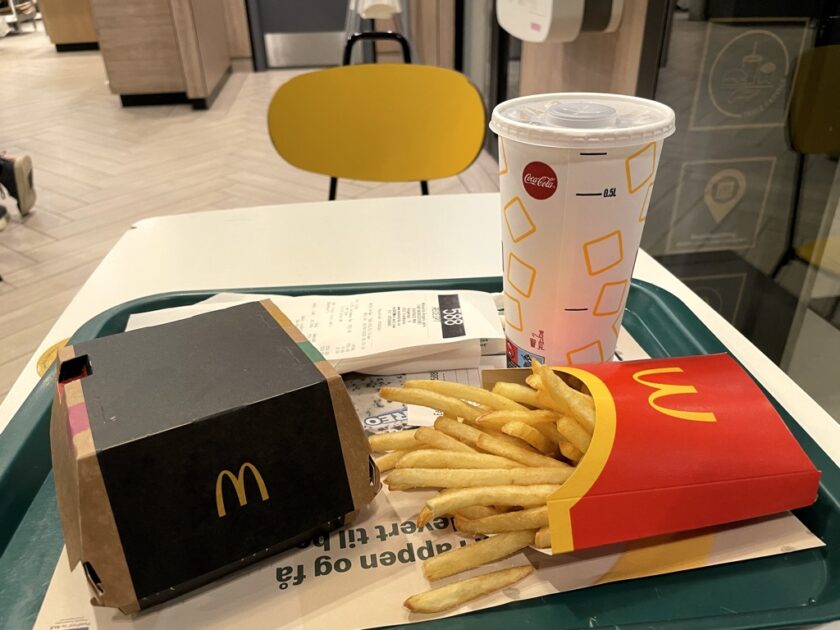 On arriving home and checking my credit card statement, I discovered that this burger, fries and drink had cost me the equivalent of THIRTEEN POUNDS. This has become my standard comparator when anyone asks how expensive Norway is.

I returned to the hotel, heading back through the same flooded underpass. Back in my room, I turned on the TV and found that NRK2 was showing, of all things, Vera. They send us exquisite Scandi-noir, and we give them Brenda Blethyn in return? Seems like a fair exchange. 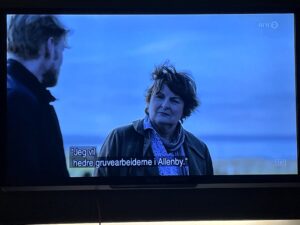 So that was Trondheim. I felt a bit short-changed, and would definitely like to go back to see the city properly. But tomorrow, the mother of all bus journeys awaited me.