I stumbled out of bed at 6.45am, and groggily made my way to the bathroom, in an attempt to wake myself up with a shower. The early start was needed to get myself back to the railway station for the 7.58am rail replacement bus to Bodø. Yay!

It was so early that the hotel had not put out the full breakfast buffet, and I had to make do with some cereal and a croissant. I ate in a deserted dining room, with a solitary other diner who looked about as happy as I was.

I checked out of the hotel and headed back to the railway station, where I joined other intending passengers on the concourse. Tucked away in one corner was the check-in point for the sleeper train, just to taunt me. 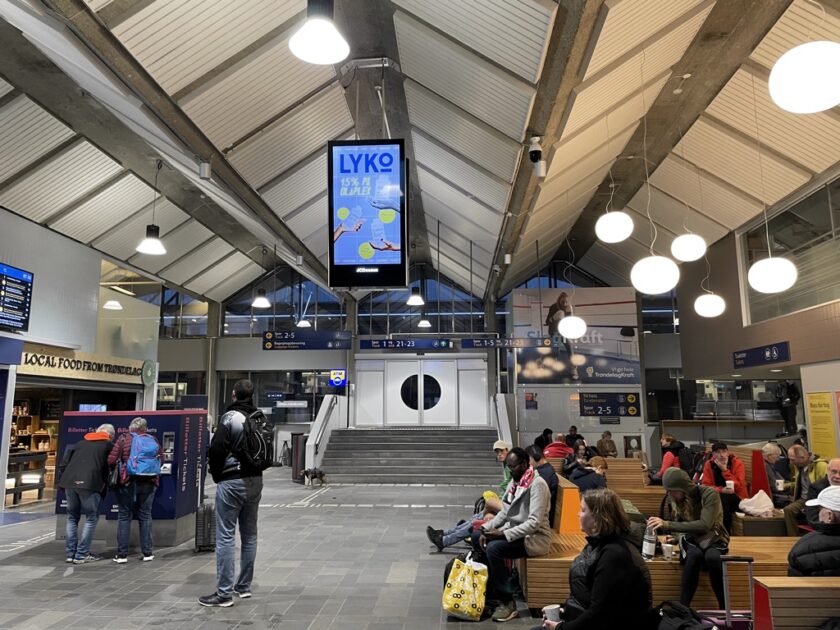 I had been warned that the 11-hour bus journey would have no food or drink served aboard, so went into the Narvesen kiosk at the station and bought a couple of sandwiches and two bottles of water. I wasn’t entirely sure if that would keep me going for the whole trip, but it would have to do.

I was nervous. My experiences of rail replacement buses have not been positive. In the UK, it usually means being shepherded on to a knackered coach with broken air-con and a surly driver who doesn’t know the route.

The coach arrived and we stepped out into the drizzle to board it. The tiny bit of paper in the window, with Buss for tog printed on it, certainly brought back memories of British rail replacement buses.

Climbing on board, however, I was pleasantly surprised to see that this was a quality coach, with reclining seats, USB charging points and little fold-down tables. It was – dare I say it? – comfortable. I started to relax a bit.

We left Trondheim and were soon heading north on the E6, the main road artery running the length of Norway. Someone sitting a few rows behind me fell asleep almost straight away and started snoring. I did my best to tune out the noise and focus on the view outside, as the road hugged the sides of mountains and skirted the banks of fjords. 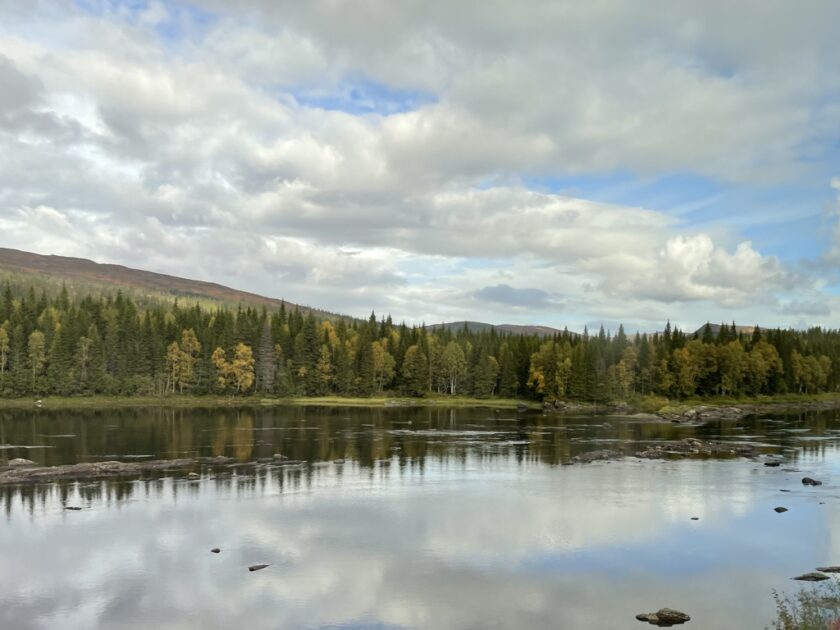 The road runs parallel to the railway for much of the journey, so I was getting more or less the same view that I would have had from the train. In fact, I had a better view, because the train journey would have been at night, and I would have been asleep for most of it (although my return journey a few days later was in the daytime anyway). 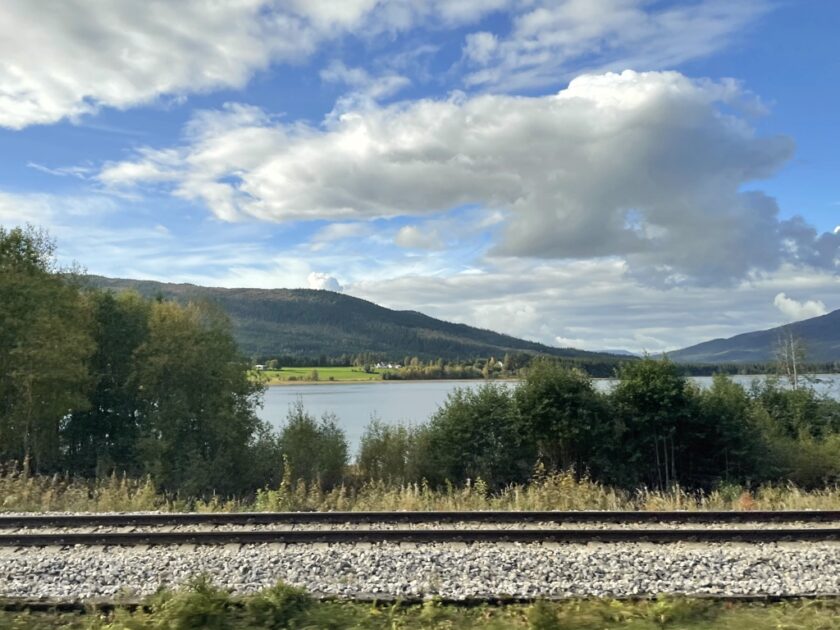 I munched my sandwiches, sipped my water, and sat back in my seat, mesmerised by the scenery passing the window. Norway is simply stunning; it’s easy to see how this dramatic scenery inspired legends of gods like Thor and Odin.

Every so often we pulled into a station car park to pick up or drop off passengers. At one station I saw SJ Nord trains left in the sidings, with nowhere to go while the line was closed. 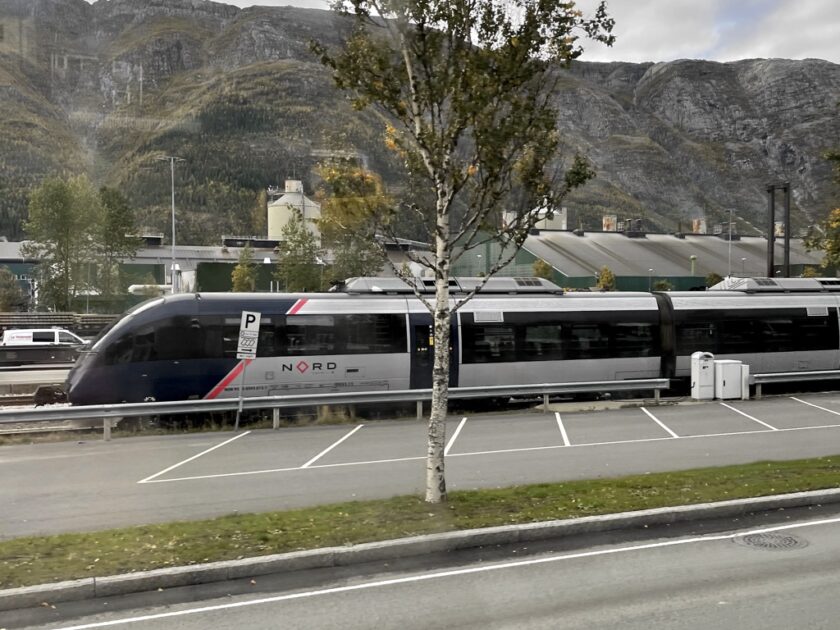 All that water I had drunk had to go somewhere, and I realised that at some point I would have to use the tiny toilet cubicle on board the coach. This was a first for me: I have never urinated on a motorway before. I gingerly made my way down the aisle, and climbed down the steps to the loo.

Things did not get off to a promising start. It took me a couple of attempts to open the door, before I realised it was a folding contraption. When I got inside, I discovered that coach toilets were designed by someone who thought plane toilets were a bit too spacious. It was essentially a box, not big enough to stand upright in, barely big enough to sit down. Whatever the bus equivalent of the mile-high club is, there was zero chance of anyone joining it here.

Having attended to personal business, I returned to my seat, dignity more or less intact, and admired the countryside once more.

Hours passed, but I had my phone to entertain me. I had solid 5G signal for most of the journey (qv my phone service back home, where I can sometimes barely get one bar in Liverpool city centre).

I kept a close eye on the Maps app, and was thrilled when the little blue dot crossed the line marked “Arctic Circle”.

We were also (I think) above the tree line, hence the lack of them in this photo.

The sun was low in the sky when we finally reached the outskirts of Bodø. By this point the journey had become rather tedious, and I was even starting to take the scenery for granted. “Yes, yes, another dramatic tree-lined mountain and fjord – can’t you show me something new?” 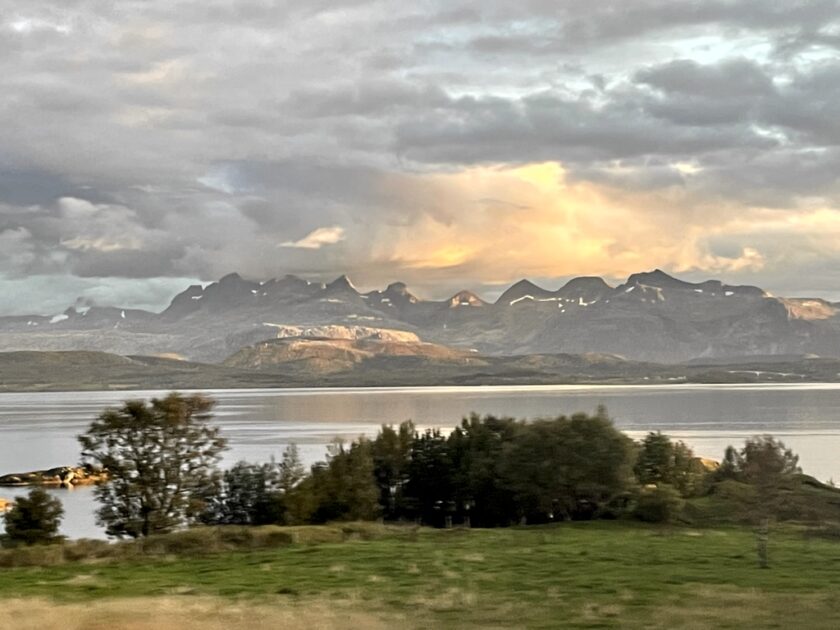 We were dropped off at the station. The northern terminus of the line is a modest affair with two tracks either side of an island platform, and a small freight depot with a diesel locomotive burbling away. I decided to leave further exploration until there were actually some passenger trains to see, and headed off to find my hotel. 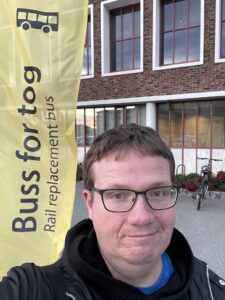 I had a few days here, so could afford to flop onto my hotel bed for an early night. But not before I found Burgasm, a restaurant promising one-of-a-kind gourmet burgers. I slipped into a booth, ordered a beer and downed it gratefully. I don’t know whether it was the relief that the journey had gone relatively smoothly, but the burger was the best I’ve ever tasted. 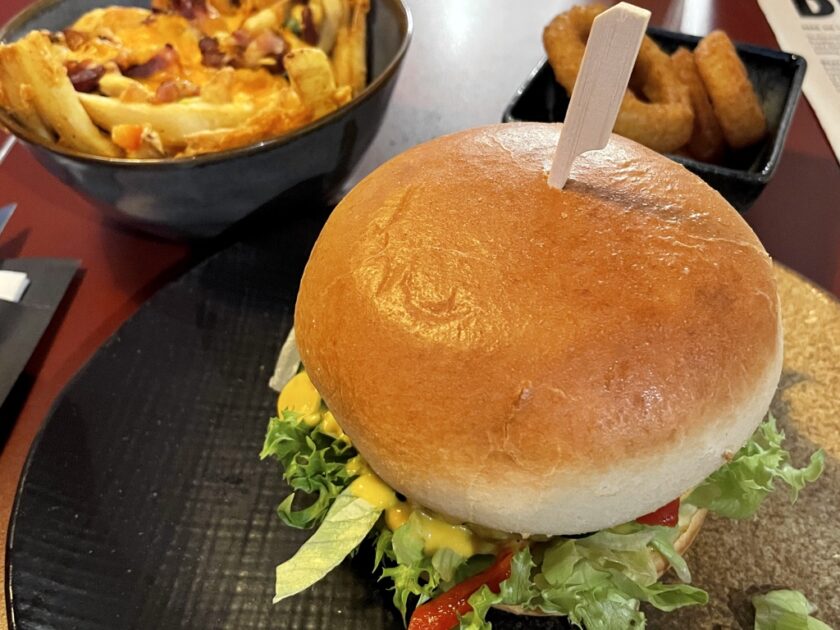 In the end, my journey to Bodø actually… wasn’t too bad? OK, it wasn’t a train, and I lost a day of sightseeing in Trondheim, but it could have been worse, and I had made it to Bodø in one piece, ready for the next stage of my holiday.

After all the trouble I had getting to Bodø, I was determined to make the most of it. The promised Northern Lights excursion was coming up, but before that I had two full days to myself. I wanted to pack in as much sightseeing as possible.