We were back at Amsterdam Centraal bright and early (well, early, anyway) the next morning. Our time in the Dutch capital was at an end, and it was time to continue on the next leg of our tour, to Berlin.

I don’t know if I’ve ever mentioned it in passing, but I like Berlin, and I was looking forward to showing Mark and Peter some of the highlights. But first, we had the small matter of a train journey.

There was just time to stop and appreciate the splendour of Amsterdam Centraal station, before heading for our train. 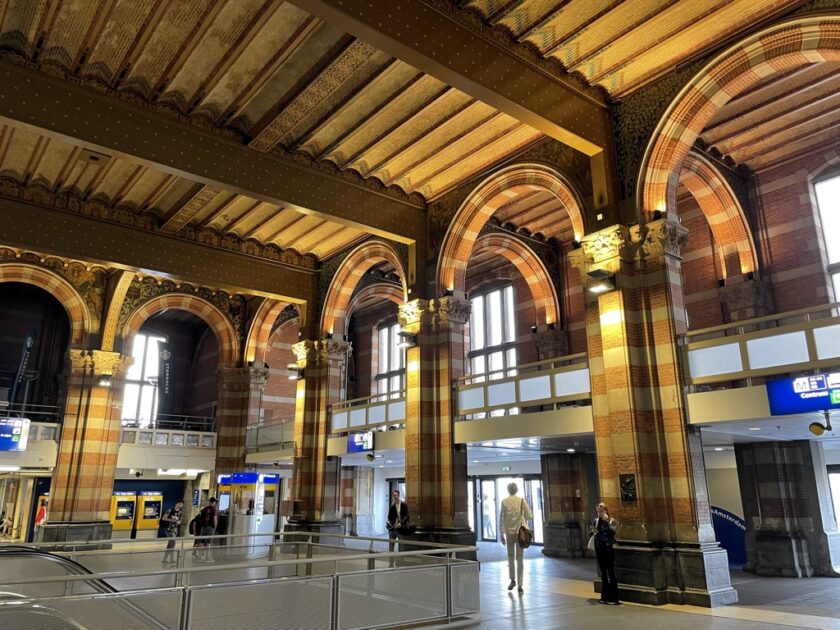 Our first hurdle was getting through the ticket barriers at Amsterdam Centraal. The gates were fitted with barcode readers which recognised the QR code on our ticket, but we only had one self-print ticket for all three of us. We navigated through successfully by scanning the ticket, then passing it back over the barrier to the next person – a trick guaranteed to get you in trouble if you try it at your local Merseyrail station, but not a problem here, it seems.

We found our train on platform 15B. This was train IC143, the 09:10 departure from Amsterdam Centraal to Berlin Gesundbrunnen. While much of Western Europe’s international rail network has been upgraded to the glamorous high-speed standards of the TGV, ICE and Thalys, the Amsterdam-Berlin route remains as a “classic” InterCity train, with a rake of 1980s-era coaches hauled by an electric locomotive. We are promised new rolling stock in 2023, but until then this remains a curious outpost of European railways past.

It’s also surprisingly slow – the 400-mile journey normally takes about six-and-a-half hours. However, on the day we travelled, engineering worksmeant our journey was extended by nearly an hour, and we would be arriving in Gesundbrunnen at the northern edge of Berlin city centre, rather than the grand Berlin Hauptbahnhof.

Level boarding definitely hasn’t reached this part of the world yet. 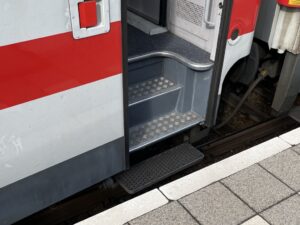 Our train was busy, with backpackers, student Interrailers and tour groups piling into the carriages. I was glad to have seat reservations. In a fit of extravagance, I had booked us into first class (€69.90 each), which I hadn’t realised meant a compartment coach.

The first thing we noticed on entering the compartment was that it was extremely warm. For some reason, the temperature control had been turned up to the maximum and the air conditioning was blasting out hot air like Liz Truss on the campaign trail (SATIRE). I turned it down and fortunately, after a few minutes, the temperature became a lot more reasonable.

Our compartment seated six, which inevitably meant having to share with other travellers. Two were in the compartment from Amsterdam, the third joined us at one of the subsequent stations near the border. They weren’t unpleasant company, except one of them pulled out a big tub of Quark, that weird cheese-esque product that certain European people seem to love but to me looks slightly disgusting. The others had friends in other parts of the train, and spent a great deal of time in the corridor talking to them loudly and blocking the passageway, which was slightly annoying. Perhaps there is a reason that British trains have done away with compartment coaches.

I watched as Amsterdam slipped away and we headed out into the Dutch countryside. We quickly diverged from the route we had taken to Utrecht the previous day, and turned east to head to the German border.

We proceeded mostly in silence, and I started to regret booking us into a compartment. Not long ago, I read Around the World in 80 Trains by Monisha Rajesh, a thrilling account of travelling across the globe by train, taking in the Orient Express, North Korea and everything in between. She encounters all sorts of characters on board the trains, and part of me had hoped that I would come away with a similar tale to tell. I wanted to encounter a rogueish racounteur travelling across Europe with nothing but an Interrail pass and a spare pair of underpants, or an elderly couple seeking to rekindle their romance with an epic journey together, or a grizzled World War II veteran revisiting the sites of his battles. At the very least, we could bump into someone filming the new series of Race Across The World. Locked in a compartment with the same people for almost the entire journey, insulated from the rest of the train, there was little chance of any of that. 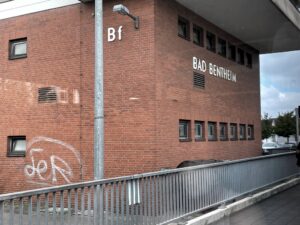 At Bad Bentheim, on the German-Dutch border, our NS loco was uncoupled and a DB loco attached – a chance to stretch my legs briefly and observe the shunting operation. The railways in Germany and the Netherlands operate at different voltages, and I wondered how the two locomotives were able to coexist on the same stretch of track. The answer seems to be that the overhead wires in the station area can be switched between voltages – once the NS loco moves into the siding, the electricity is switched over to allow the DB loco to move into the station. The full-size equivalent of a Hornby R618 isolating rail and R046 On-On Switch (I may be oversimplifying slightly).

Crossing into German territory also meant complying with Germany’s COVID laws. Masks are still very much required on public transport in Germany, much to the chagrin of one of our compartment-mates (is that a word?) who didn’t have one. Mark generously let her have one of his spare FFP2 masks, which she slipped on with barely a word of thanks.

To be honest, when I booked this trip back in March, I had assumed that Germany would follow in the footsteps of many of its European neighbours, and abolish its requirement for masks on public transport. However, although the rules on masks have been removed for most public places, in buses and trains it is still very much required. From what I observed, the rule is much more strictly adhered to than it ever was in England. I leave it up to others to discuss whether the continuing mask requirement is a good thing (not in the comments here though, please). 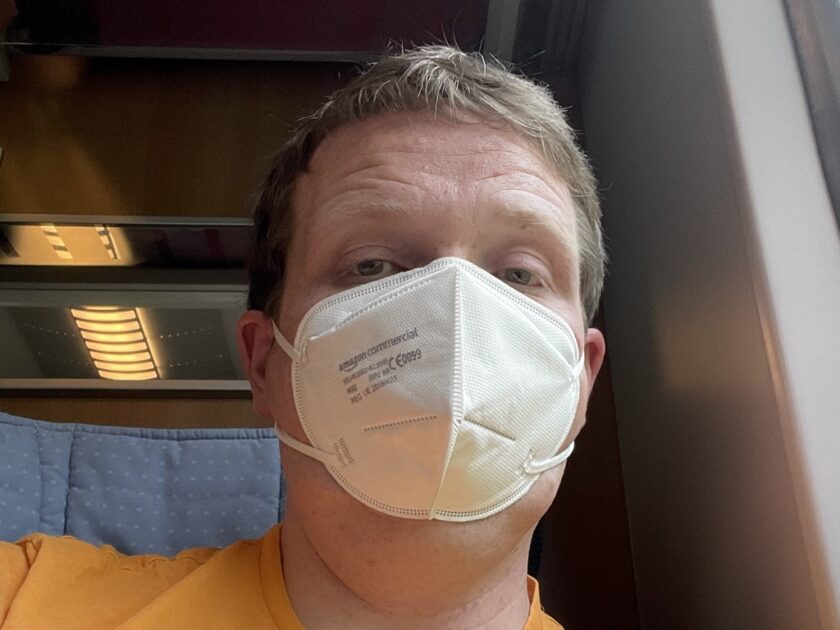 Flat Dutch countryside gave way to flat German countryside. At the next stop, Rheine, we deviated from the usual route and headed south, to Münster, where our train reversed before continuing to Osnabrück where it regained the usual route. A heck of a diversion, adding a good 50 km to the journey, but infinitely preferable to being shoved on a bus for part of the journey, which is surely what the UK railways would do. 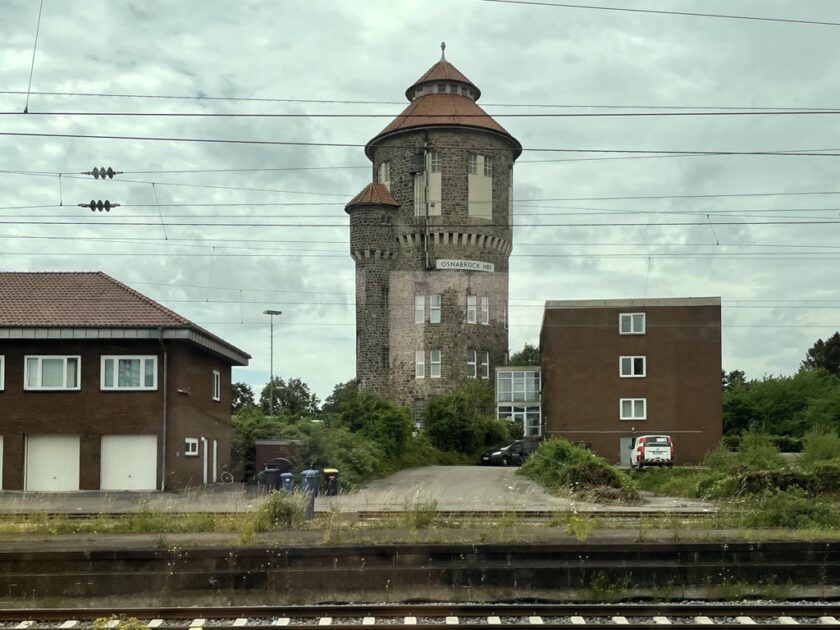 Lunchtime approached and I decided to venture to the Bordbistro, the DB buffet car. It was handily located in the very next coach (another benefit of going first class). Unfortunately, all of the tables were occupied, mostly by two people taking up a table of four, sipping a tiny cup of coffee and giving off negative vibes to anyone thinking of asking to share the table. I had hoped for some fine dining while the scenery streaked past outside, but I concluded that this was unlikely.

The Bordbistro attendant did not speak much English, but was able to point me to a long list of items that were not available. I eventually found a vegetarian wrap, one of the few food items on the menu that wasn’t crossed out, and ordered it with a bottle of Coke. There was a perch seat with a small standing table available, so I settled for that while I ate. The wrap – warmed up in a little mini-oven – was quite nice, to be fair.

Back in the compartment, and things continued uneventfully until we ground to a halt in Wustermark, just outside Berlin. The guard made an announcement in German which I didn’t understand, but I caught the words “Stellwerk” and “defekt” from which I gathered there was a signalling problem, and the words “Sechzig Minuten” which indicated delay of up to an hour. 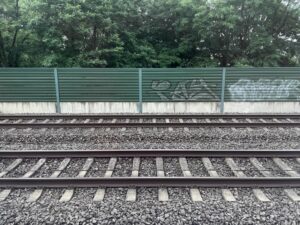 Luckily, it was not actually anywhere near an hour. After about ten minutes watching trains whoosh past on the adjacent track, we started moving again. Arriving into Berlin-Spandau, we could see things in a state of disarray, with customer information screens showing severe delays to trains heading west, and grumpy-looking people waiting on the platform. As we continued, we passed a long queue of trains on the opposite track, waiting to continue their journeys. I believe single-line working had been put in place, and we were fortunate to be near the front of the queue to get past the obstruction. 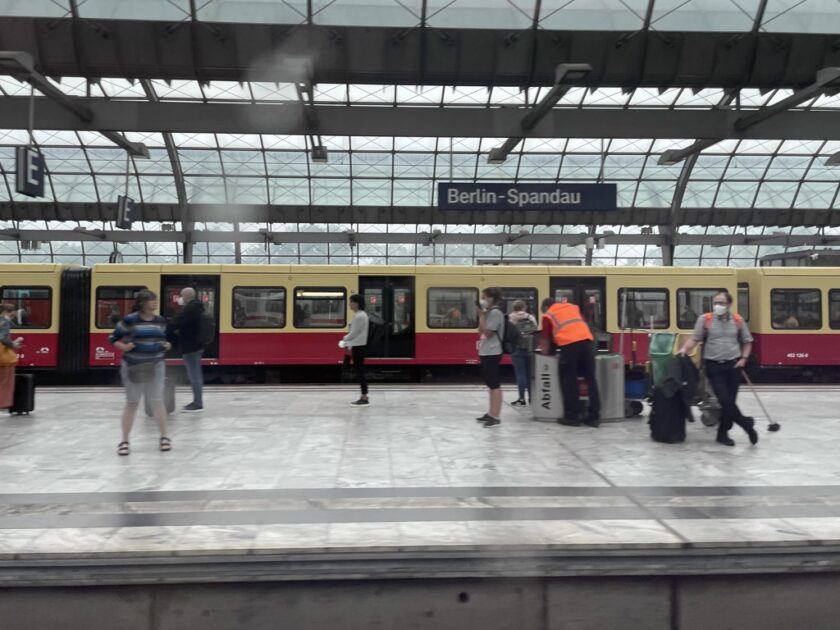 The big moment had arrived as we trundled into Berlin. Sadly, we missed the exciting ride along the Stadtbahn through Berlin city centre and its landmarks, and the glorious glass and steel edifice of Hauptbahnhof. Instead, we skirted the edge of the city to arrive in the large, but less impressive Gesundbrunnen.

It was a slightly anti-climactic arrival into the city. It’s strange how long journeys, spent mostly sitting on your backside, can nonetheless tire you out, but we were all quite fatigued by the time we got to Berlin. We made a quick beeline to the S-Bahn platform to get the train into the city centre and find our hotel.

Despite the grumbles outlined above, I did enjoy the journey overall. Travelling city centre to city centre, avoiding the faff of the airport, was definitely a plus. It was a shame about the limited options in the Bordbistro, and I think I would actually prefer a standard class open carriage to a compartment. However, I would definitely do this trip again in the future. It would be interesting to come back to it in a year or two, when the new rolling stock has arrived, and see what a different it makes.

Long journey behind us, we took some time to rest and recharge at our hotel before heading out to sample all that Berlin had to offer.

(As an aside, I have a note on my phone about this journey: “Someone will clean this seat later”. Unfortunately, a month after the event, I have completely forgotten what it means. But it was obviously important, so I am leaving it here for posterity)