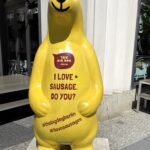 Berlin was in the midst of a mini-heatwave, the temperature nudging past 30C every day we were there. It was perfect weather for a spot of nude sunbathing in the Tiergarten (not that I did that… ahem) but otherwise, much of our time was spent darting from one shady spot to another, to keep the fierce sun off our backs. Still, we crammed in plenty of sights while we were there.

We availed ourselves of the famous 9-Euro-Ticket. First made available in June for a three month period, this ticket gives unlimited access to all local transport across Germany. The ticket is subsidised by the German government and was meant to offset increasing transport costs for commuters, but seems to have been largely used by leisure travellers, with resultant overcrowding on tourist routes as Germans headed to the beach en masse. Even for us, staying in Berlin for just three days, it saved us money (a standard day ticket for just Berlin costs €8.80). 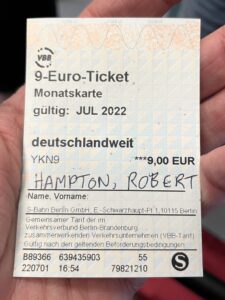 Grim reality did intrude on our otherwise leisurely weekend, as we saw reminders of the war in Ukraine in several places. The banner draped across the Haus am Checkpoint Charlie, the floral tributes and strong police presence around the Russian embassy, and the signs welcoming refugees in Berlin Hauptbahnhof. 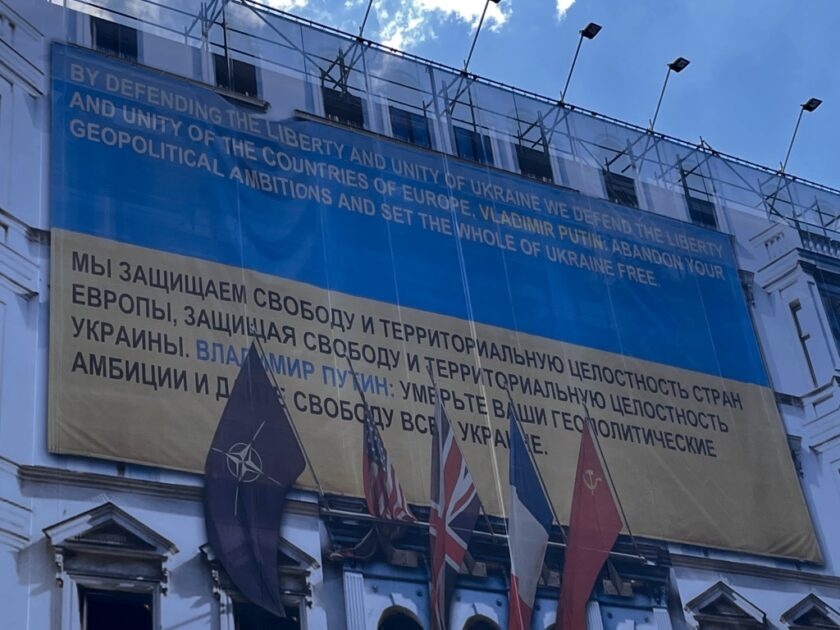 We headed for the Fernsehturm on Alexanderplatz on Saturday afternoon, where the high-speed lift took us up to the observation deck for a panoramic view over the city. No revolving restaurant this time, sadly, but we did take advantage of the bar to enjoy a Berliner Weiße 200 metres above ground level. 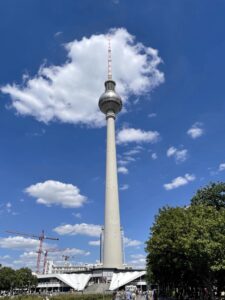 It was a beautifully clear day and there were fine views in all directions, including of the Tiergarten, the former Tempelhof Airport, and the Stadtbahn railway viaduct snaking its way through the city centre.

Just round the corner from the TV Tower was the DDR Museum, the museum of East Germany. I have visited it before but was happy to see it again, especially the brilliant Robotron computer, which was surely 10 years out of date on the day it was manufactured.

Another repeat visit, and more antiquated technology, in the Computerspielemuseum, where the gaming icons of my childhood are now museum pieces, where kids point and laugh at them for the blocky graphics and terrible sound, before going off to spend a million quid on microtransactions to make their XBox games playable. There is also an East German arcade machine, which involved shooting deer (yes, really).

Something new for me was the Berlin Zoo. Spread out across a massive area right in the city centre, there is an impressive collection of animals. Unfortunately on the day we visited it was extremely hot, so most of the animals were hiding out of the oppressive heat, or just lying around doing not very much. All my apes gone… to sleep.

One slightly sad moment came as we passed the bear enclosure and saw a sign paying tribute to Katjuscha, a bear which passed away last year at the ripe old age of 37.

Big crowds for the pandas, not surprisingly. Awwwww. Awwwwwwwwwwwww! 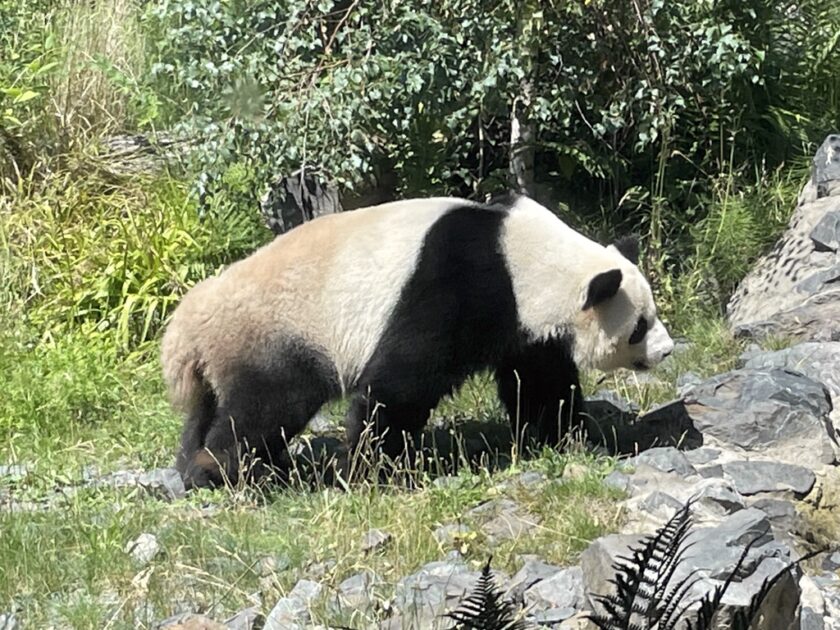 The elephants definitely had the right idea to keep cool, giving themselves a shower by sucking up water through their trunks and spraying themselves. 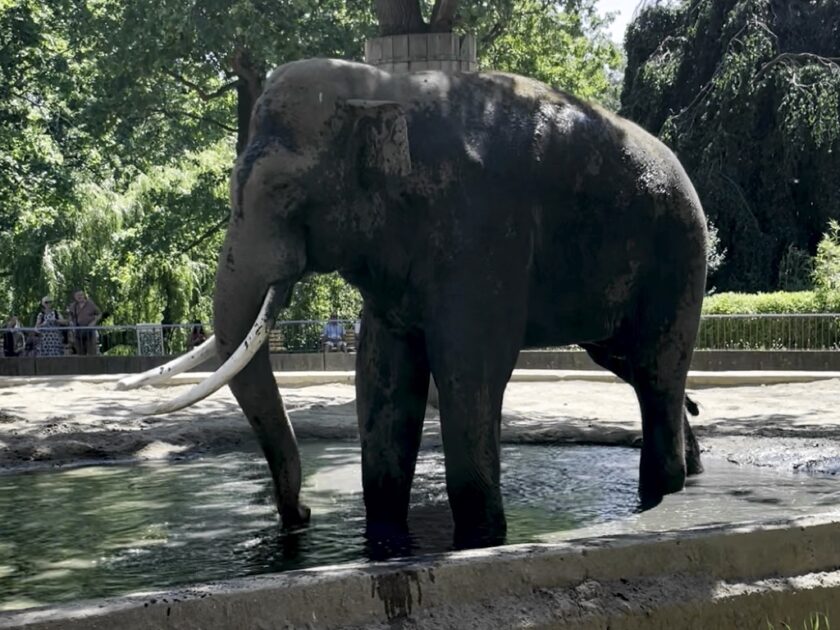 After the zoo, we took a bus to the Schwules Museum for a short visit. Their current exhibition is about the squats that proliferated in disused buildings around Berlin in 1990, just after the fall of the Wall. It focused on the Tuntenhaus, a squat in Friedrichshain occupied by mainly LGBT people from both East and West Berlin. As an added bonus, admission was free as part of Museum Sunday, where many museums and galleries waive admission fees on the first Sunday of each month.

We also headed to the Reichstag for a quick lesson in German history. Notoriously burned out by fire in 1933, severely damaged during the Battle of Berlin, and left empty for many years during the division of the city, today it is once more the centre of German democracy and another tourist attraction. We made the mistake of climbing up to the top of the dome. The views were great, but a giant glass bauble filled with mirrors is not where you want to be during a heatwave, and we stayed there for only a few minutes before the oppressive heat got the better of us. 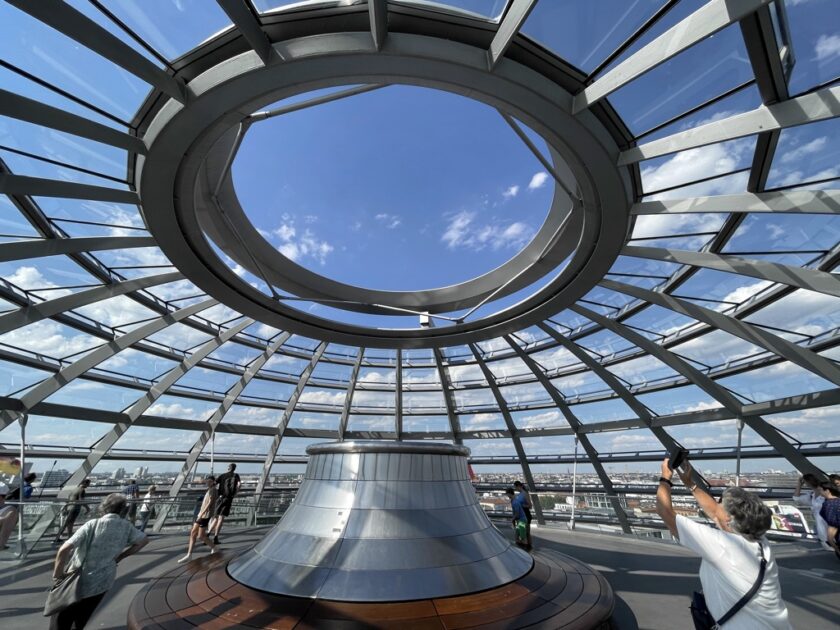 I couldn’t visit Berlin without visiting some of my favourite gay bars. First to Blond where, on the night we visited, all the bar staff were dressed up as sailors. I have no idea why, but I’m certainly not complaining.

On the second night we visited Prinzknecht, where pretty much every taste was catered for.

And of course, we rounded off each evening with some fine dining in one of the many fine eateries. A hearty portion of schnitzel in Faustus? Or maybe some delicious Königsberger Klopse in Restaurant Elefant? Don’t mind if I do. With Mezzo Mix to wash it down, natürlich.

I’ve said it before and I’ll say it again… Berlin, du bist so wunderbar.