In all my international train travels, and despite visiting Amsterdam twice by train, I had never actually travelled on Nederlandse Spoorwegen. Yes, I have never entered one of their bright yellow trains – shameful. It was high time we put that right.

Mark had suggested we take a day out to visit the Spoorwegmuseum, the Dutch national railway museum. It is in Utrecht, just a short train ride from Amsterdam. Naturally, I didn’t need much convincing, so on Thursday morning we marched back into Centraal station and trekked to Utrecht.

We purchased our train tickets from the NS ticket machine at Amsterdam Centraal. Nearly all train tickets in the Netherlands are issued on smartcards, either the reusable OV-Chipkaart or – if you are ignorant tourists like us – on a single use disposable card, which nevertheless contains a chip, and costs an additional €1 for the privilege (the Dutch word for this supplemant is “toeslag” which to English ears sounds like something you’d put in a Grindr profile, but… I digress). 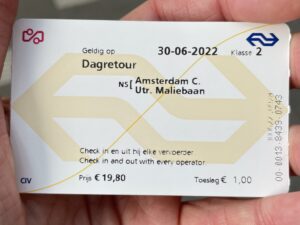 NS InterCity trains to Utrecht run at frequent intervals from Amsterdam, and we didn’t have to wait long before a double-deck train rolled into the station to whisk us off for the 25 minute journey to Utrecht Centraal. Naturally we took a seat upstairs for the best views. 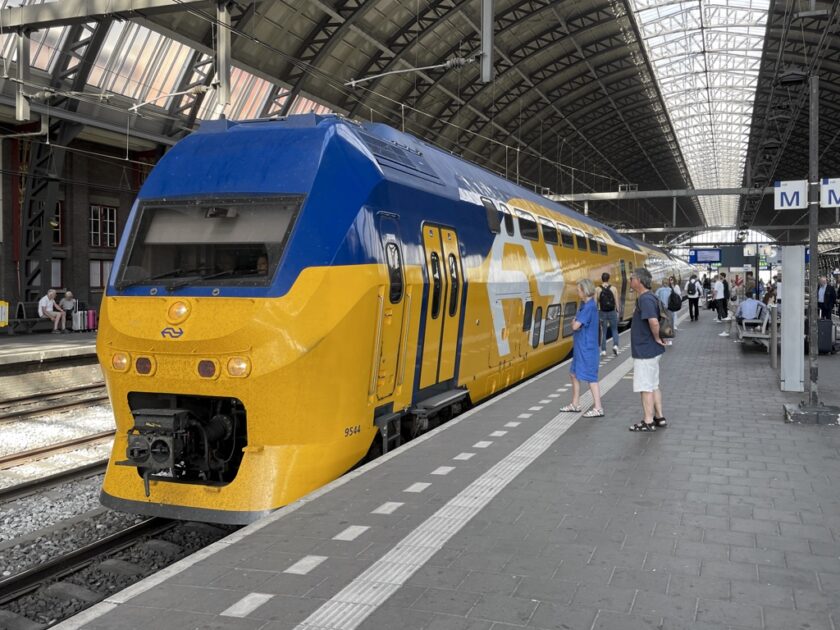 I stared out at the relentlessly flat Netherlands countryside as we sped along the mainline to Utrecht. Not long into the journey the peace was shattered by a group of teenagers, one of whom had suddenly developed a nosebleed. And not just the odd spot of blood, but proper gushing. He dripped all over the floor of the train carriage before one of his friends produced a tissue and he dashed to the loo to clean himself up.

I mainly mention this just in case he turns out to be patient zero at the beginning of a zombie apocalypse.

We were soon arriving into the 16 platform monster station that is Utrecht Centraal, one of the key rail hubs of the Netherlands. It looked stunning, but there was very little time to check it out as we had just a few minutes to make our connection.

In a bay platform, we found our next train waiting for us. The museum is located on the site of Utrecht’s original main railway station, Maliebaan, and brilliantly, one platform of the original station has been restored to service and connected to the main line network, with a shuttle service running from Utrecht Centraal hourly during the museum’s opening hours. 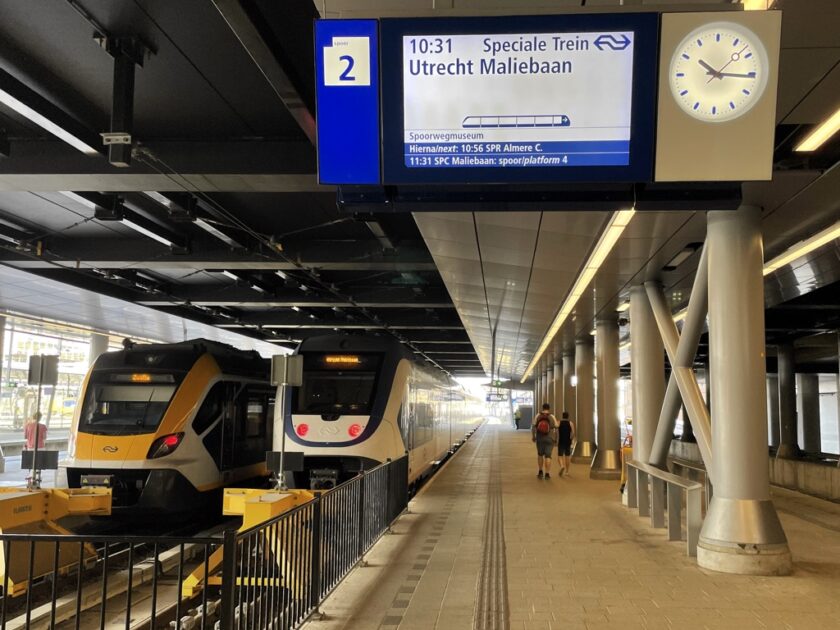 Our train left Utrecht Centraal and trundled through the suburbs for a few minutes, then came to a halt on the line. This was not an ordinary signal stop though – we saw the driver walk through the train to the rear cab, and after a couple of minutes we set off again, reversing onto the spur into the museum station. It’s a proper station too, with ticket machine, smartcard reader, and timetable poster.

I will admit, I was slightly disappointed. When Mark said a special train ran to the museum, I expected a couple of old coaches and a steam loco, not a bog-standard NS Sprinter unit. Still, I love the idea of a railway museum having a dedicated electrified line running right into it. 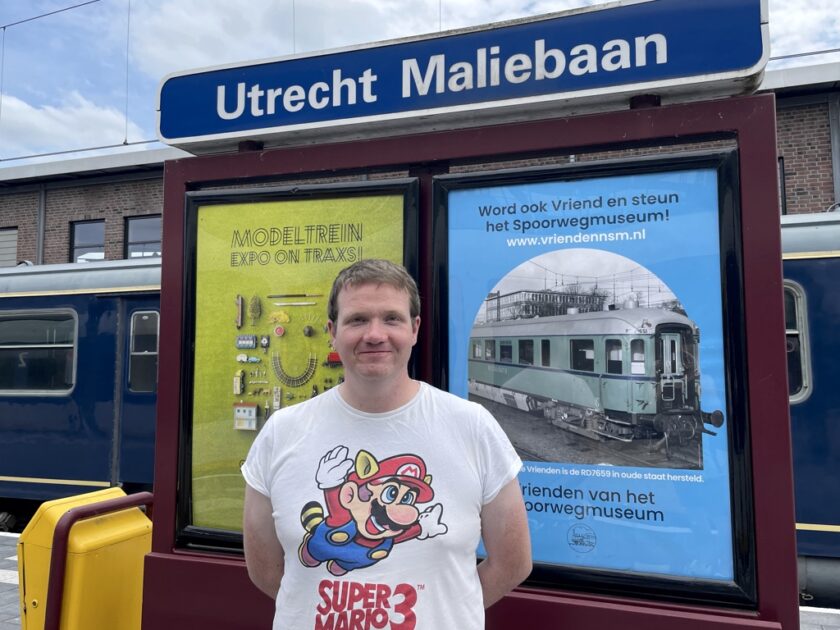 In the museum itself, exhibits ranged from steam locomotives dating from the earliest days of railways in the Netherlands, to double-decker carriages in service recently enough that posters inside pointed passengers to the NS website.

Excellently, many of the vehicles were open and people were encouraged to climb aboard and explore, in contrast to many other museums I have visited, where exhibits are cordoned off behind insistent “DO NOT CLIMB!” signs.

An exhibit on mail trains revealed that the Netherlands had a fleet of travelling post office trains, where mail was sorted on the move. They had the codename “Pecs”, so I can now say “check out those pecs!” without sounding like a pervert. 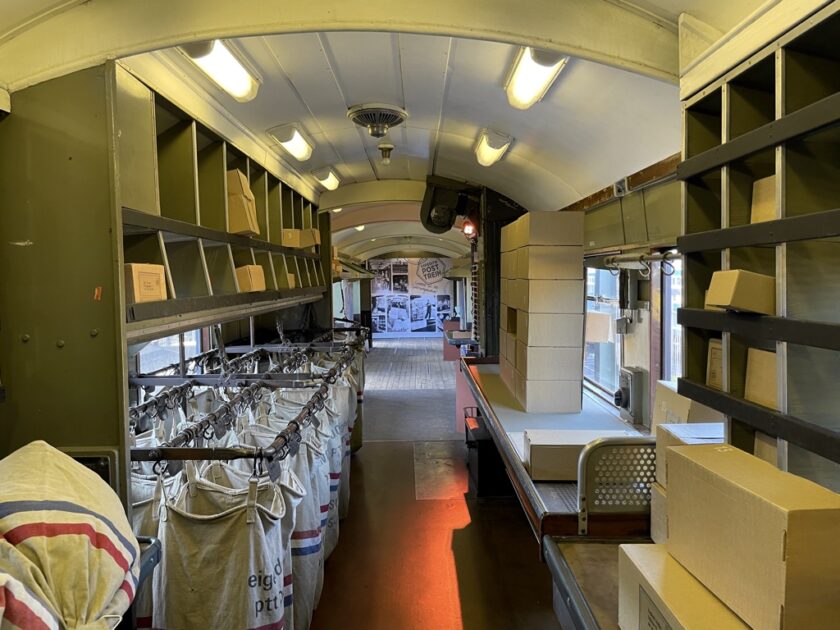 Hidden away in an otherwise mostly empty room was a splendid example of a split-flap departure board, apparently rescued from Utrecht Centraal station. Sadly it didn’t seem to be operational – I could listen to the clack-clack-clack of one of these contraptions all day. 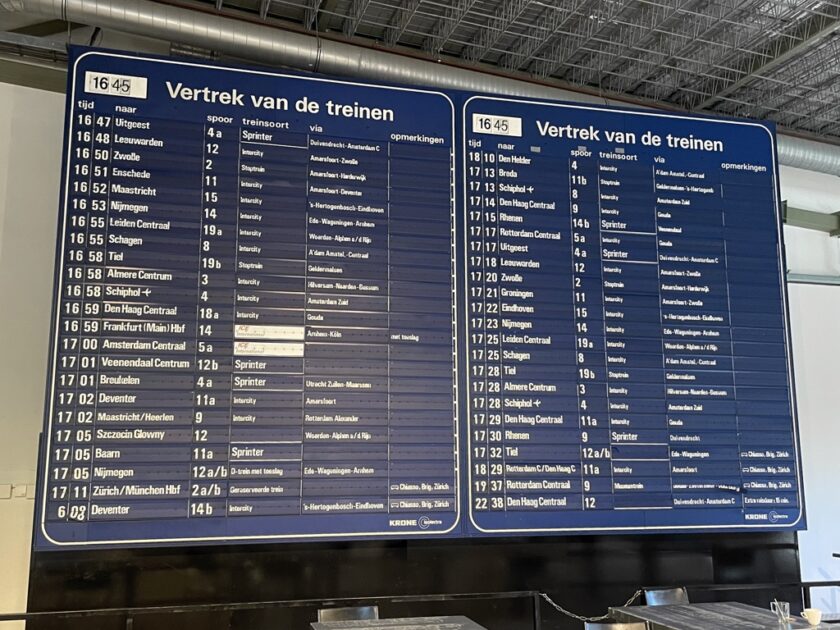 Outside were more vehicles, including what appeared to be a Class 08 shunter painted in a jazzy livery. What it was doing there, I’m not sure. 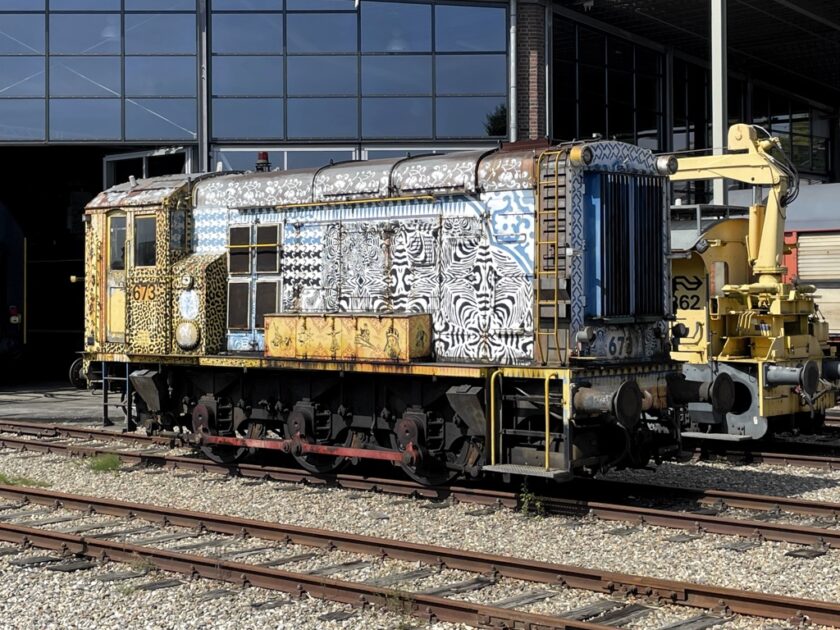 Also outside, a signal box, which was sadly locked up, but we could peer through at the levers and machinery inside.

In addition to the exhibits, there were several special attractions available. The first was “Steel Monsters” a ride which purported to show a “day in the life of a railway employee” but really was just an excuse to have a ghost train-type ride. We bounced and swayed around a track past various mannequins of railway workers doing various jobs, with steam blown at us and oncoming lights hinting at an impending collision – the Steel Monsters in question being steam locomotives lit spookily.

The second ride was “Trial By Fire”, which promised to simulate what it is really like to drive a train. We were escorted into a “locomotive” – actually, a motion simulator ride. A driver’s-eye view was projected in front of us as we hurtled down a 3D animated track. Instructions were barked at us in Dutch, but it soon became clear that whatever buttons we pressed made no difference. After starting in a 19th century station, we hurtled through tunnels, emerging in the countryside, continuing through snow-capped mountains, the American Wild West, before emerging onto a futuristic monorail in a sci-fi metropolis. It was exhilirating, but not educational.

There was not much left to see, but there was time for a quick stop to look at the original Maliebaan station building, beautifully restored and now serving as an exhibition space. 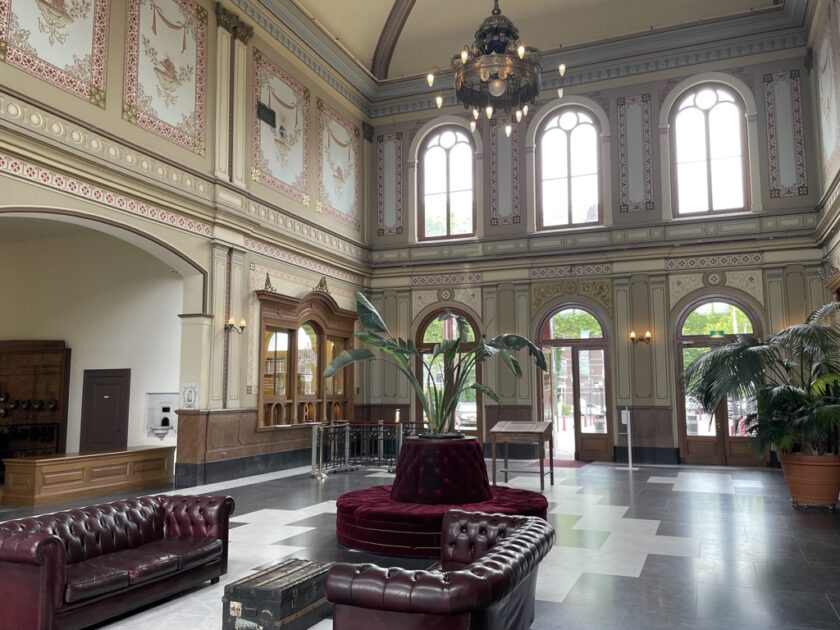 And that was that. Our train to Utrecht Centraal was waiting in the platform, and we boarded it for a return journey, complete with another reversing movement.

I’m not too sure about the funfair rides, but overall, the museum was a great way to spend a few hours. It is easily reached from Amsterdam by train (a return from Amsterdam Centraal to Utrecht Maliebaan is less than €20) and admission is €17.50. Highly recommended for anyone with even a passing interest in trains.