Hotels in Amsterdam are expensive, and our “three-bed room” in the Ibis was clearly just a normal double room with an extra bed shoved in where normally there would be a little chair and table. It was rather cramped, and much of the time in the room was spent getting in each others’ way. Still, it was the only place in the centre that was remotely affordable, even booking at three months’ notice, so I can’t complain. Oh I just did.

The big compensation was the hotel’s closeness to Centraal station – in fact, it literally straddled the platforms, and access to our room was via a footbridge over the tracks, offering splendid views of arriving and departing trains. 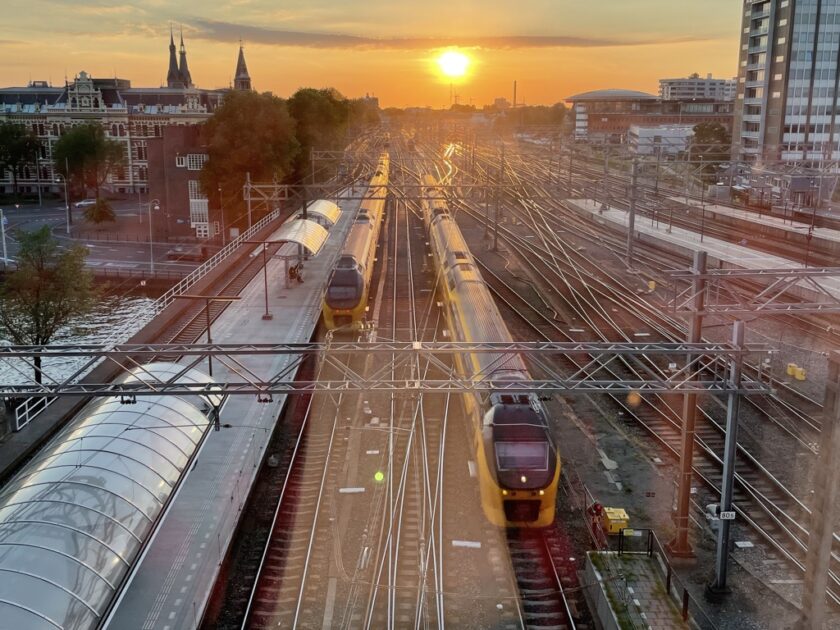 Turning on the TV, and what was on but Homes Under The Hammer. Not a Dutch remake, but the original BBC show, subtitled, with Dion Dublin expounding on de trap naar de slaapkamers. As Scott pointed out on Twitter – why do the Dutch get a better title sequence than ours?

Leaving the hotel room required navigating through this quite astonishing bike park. They like their cycling in the Netherlands, and the Dutch government has stepped up to provide the infrastructure. Don’t let anyone tell you that a modal shift towards bicycles isn’t possible – it just takes a firm, long-term commitment. 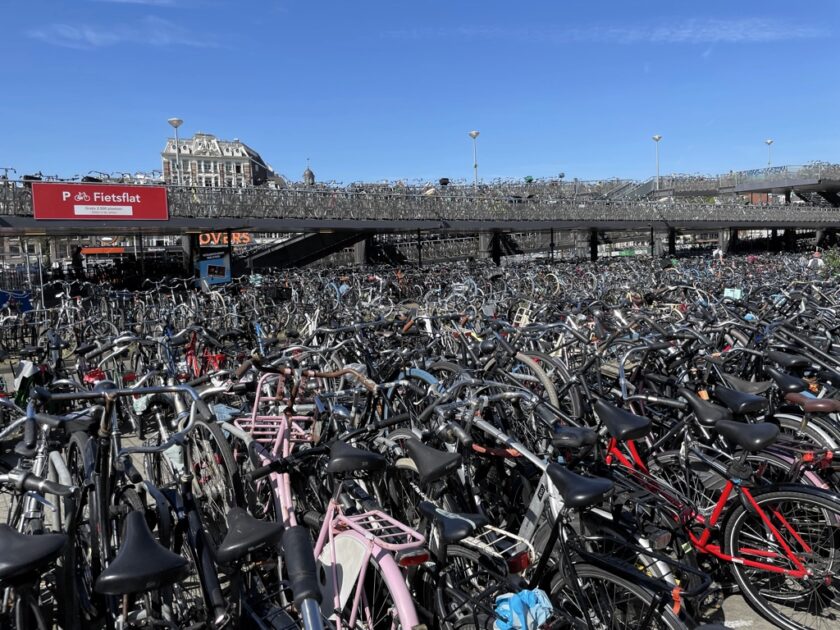 It didn’t take us long to find our first gay bar. The brilliantly-named Prik served up a plethora of drinks in a pleasant atmosphere. It was a beautiful sunny day, but we opted to sit inside like the pale, easily-burned Englishmen that we are. 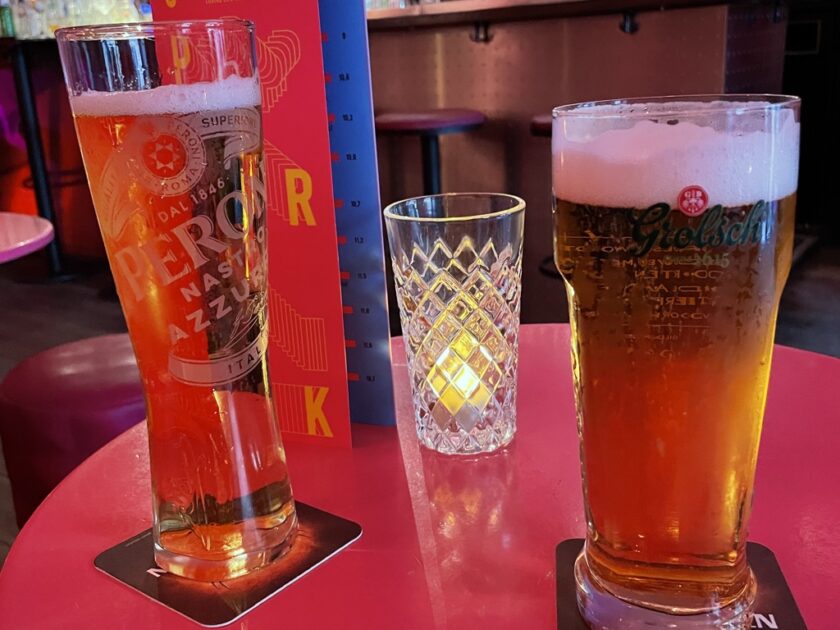 Subsequent nights took us to the Queen’s Head. First late on Wednesday evening, an hour before closing time, when it was quiet. We went back again the following evening, to find the bar packed and a show about to start. It was a drag show hosted by the star of Drag Race Holland, Reggy B. I enjoyed it, despite my deep fear that I would plucked out of the crowd for the audience participation games – one of which involved faking orgasms. 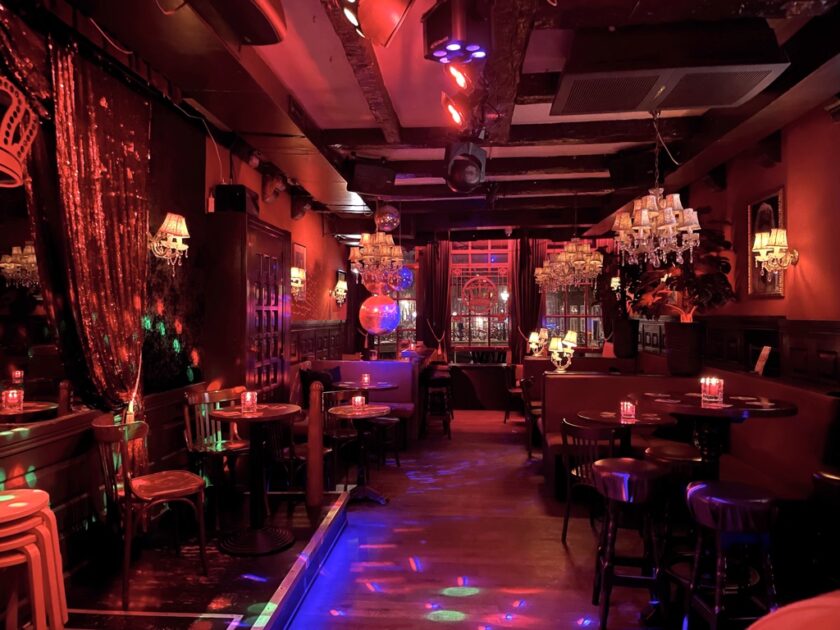 Amsterdam is a great canal city, almost as famous as Birmingham. One of the best ways to see the city is with a cruise by canal. We booked the 100 Highlights Cruise and hopped aboard on Wednesday morning. I can now say, without any hesitation, that I have been up the Gentleman’s Canal.

The tour took in most of the sights in Amsterdam city centre – the Anne Frank house, the Westerkerk Church, before sailing out into the IJ for a glimpse at Amsterdam-Noord and obnoxiously huge cruise ships tied up at the docks. One recurring theme in the commentary was that the houses in Amsterdam were now too expensive for most ordinary people to afford. Even the house boats – originally a way to avoid the expense of a proper house – are now out of reach for most.

It was a fun way to spend an hour. The only problem was that the glass-roofed boat got quite warm in the sunny weather. It was like a Dutch Oven (I am very sorry).

The Van Gogh Museum honours the Netherlands’ most famous artist and star of that Doctor Who episode. Be sure to pre-book a slot to be sure of getting in (selling tickets at a counter is so passé). Then be prepared to dodge tour groups clustered around all the most famous paintings. After a couple of hours spent ooh-ing and ahh-ing at Sunflowers, Almond Blossom and The Wheatfield, be sure to exit through the gift shop and emerge clutching a Van Gogh Bear, and don’t be too disappointed that The Starry Night isn’t here, but at the Museum of Modern Art in New York.

House of Bols celebrates genever – Dutch gin, the original cocktail ingredient, predating its English equivalent by quite some time. A tour promises insight into the history of genever and its use in cocktails. Our pre-booked tickets were exchanged for a small shot of liquor, with the instructions to not drink it until the appropriate place on the tour. This turned out to be a small room where going through a door plunges you into darkness – the idea being that having your other senses cut off allows you to appreciate the taste more. I have no idea if it worked, but hey – free booze!

More free drinks came at the end of the tour, where you can select a cocktail of your choice from a machine, which prints out a voucher to be exchanged at the bar. I opted for a Ginger Mule, which seemed somehow appropriate for me.

The first cocktail is included as a standard part of the tour – a Genever Convention, if you like. Additional cocktails can be purchased from the machine for €6 each, a price we were only too willing to pay (hic). 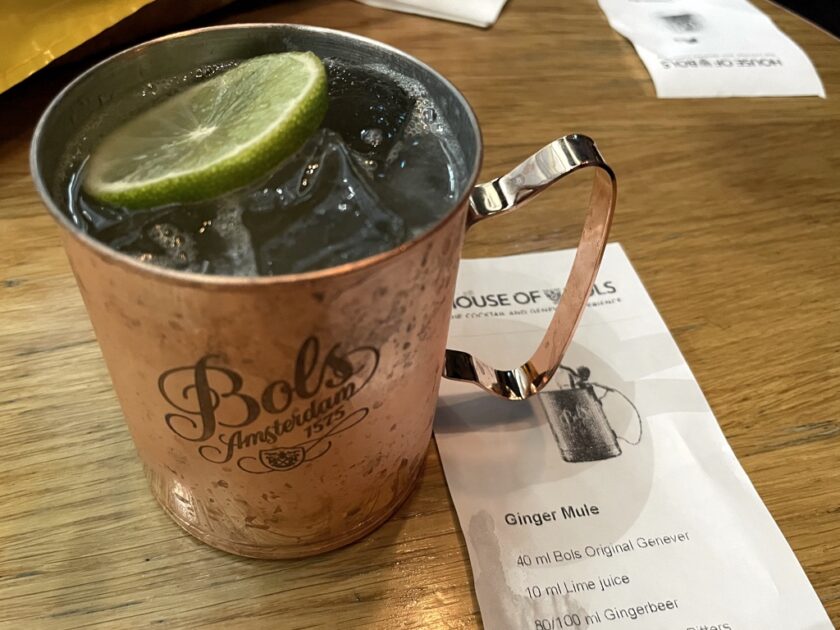 We did not base our entire Amsterdam trip around getting free drinks, but the Heineken Experience proved another excellent place. It’s located in the original Heineken Brewery in central Amsterdam, which continued brewing until a newer facility opened in the city’s outskirts in 1988. The original brewing equipment is still largely in situ for visitors to poke at. We joined our fellow visitors, which included a gaggle of excited American teenagers who were happy to be in a country where they could legally drink. 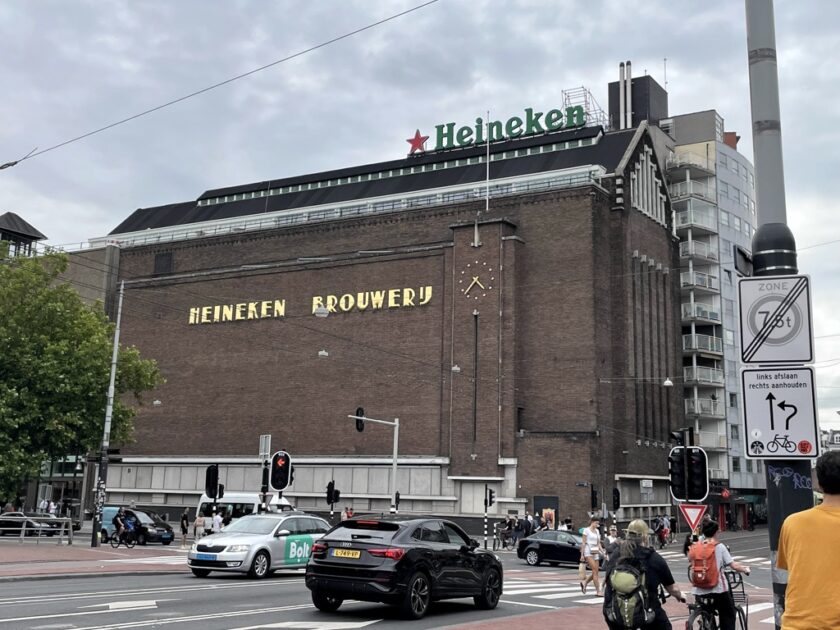 After some initial exhibits about the history of Heineken, there was a “4D brewing experience” which promised that we would experience what it is like to be Heineken getting bottled. I was expecting a thrilling rollercoaster ride, but it was actually little more than standing in a room while various lights and sound effects were projected onto the four walls around us.

My favourite exhibit was this early Heineken Beer Bottle, only because the caption explained that the beer is brewed using a process called “bottom fermentation”. 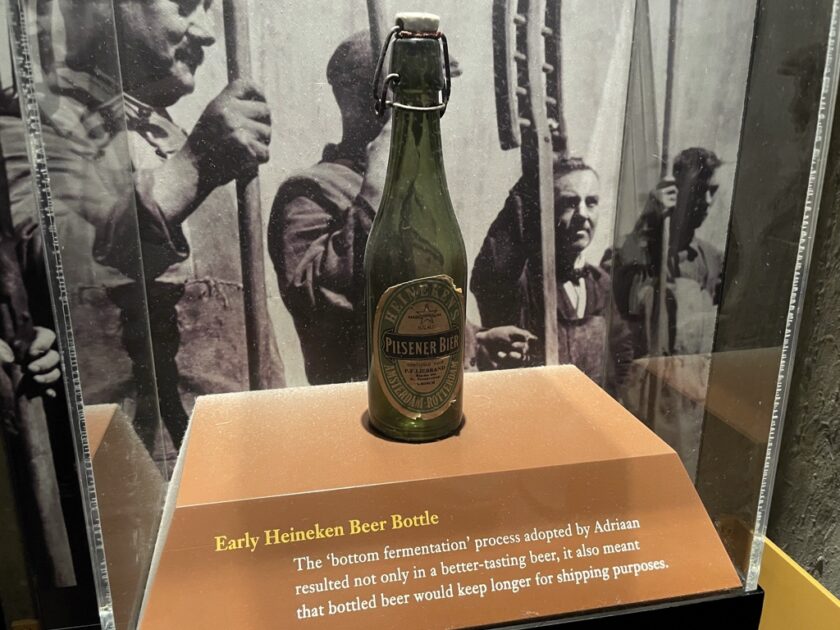 Then it was through into the original brewery room, where we could inspect the original brewing equipment close up. We also got the chance to get our name printed on a customised bottle. Obviously only a gullible tourist would pay over the odds for that. Ahem. 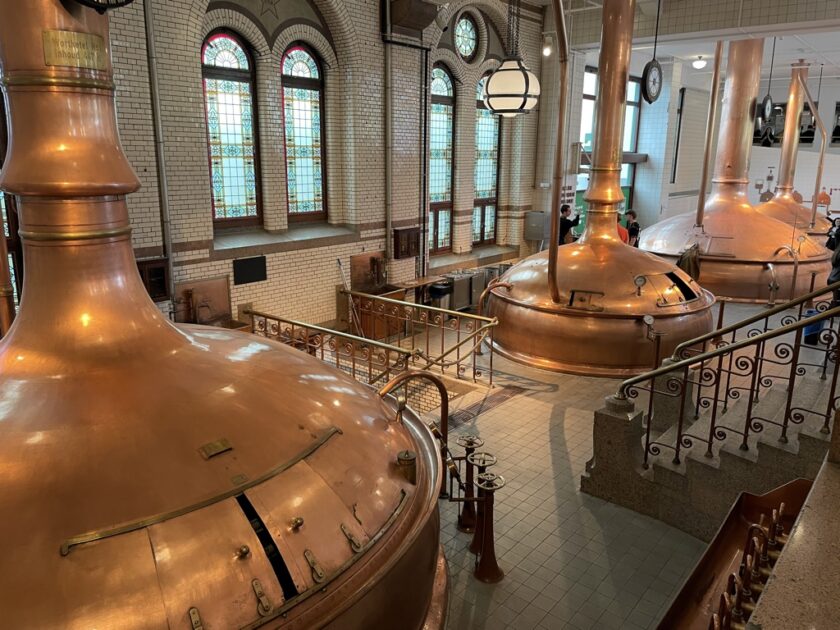 The tour concluded with another free bar, although sadly this was limited to two (half-pint) glasses per customer. It was a fun way to spend an hour or so. Bonus points to the tour guide who named the four ingredients of beer: “Grain, hops, water, and… last but not yeast.” Hey, I have a weakness for puns. 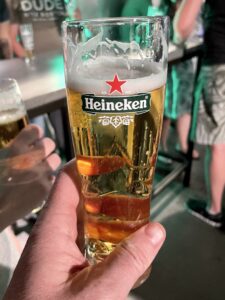 Some excellent days of sightseeing were followed by some splendid meals in the evening. The highlight had to be Cafe Staalmeesters, which had some excellent food and drink, and the added bonus of a cat. It lounged around casually in the bar like it owned the place, as cats generally do, although it ran away the minute I tried to pet it. 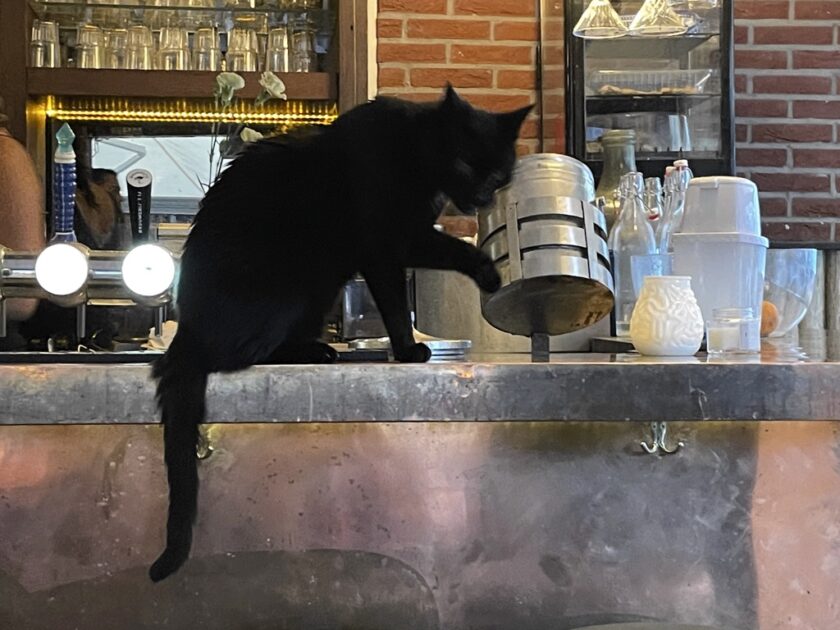 So that was how we spent our time in Amsterdam. But we didn’t confine ourselves to just the city. No, we ventured further afield too. You may not be surprised to hear that it involved trains. But more of that next time…