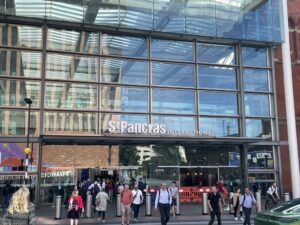 It was a grumpy, annoyed Robert who ordered breakfast in the Wetherspoons at St Pancras station. Things improved with the arrival of Mark and Peter, whose train from Brighton had also been cancelled (although they only had to wait 15 minutes for the next one).

I felt a little better after I had finished my breakfast of scrambled eggs and black pudding (which is a perfectly cromulent combination, no matter what judgmental types may say). Together, we headed for the Eurostar check-in and Priti Patel’s Security Theatre. 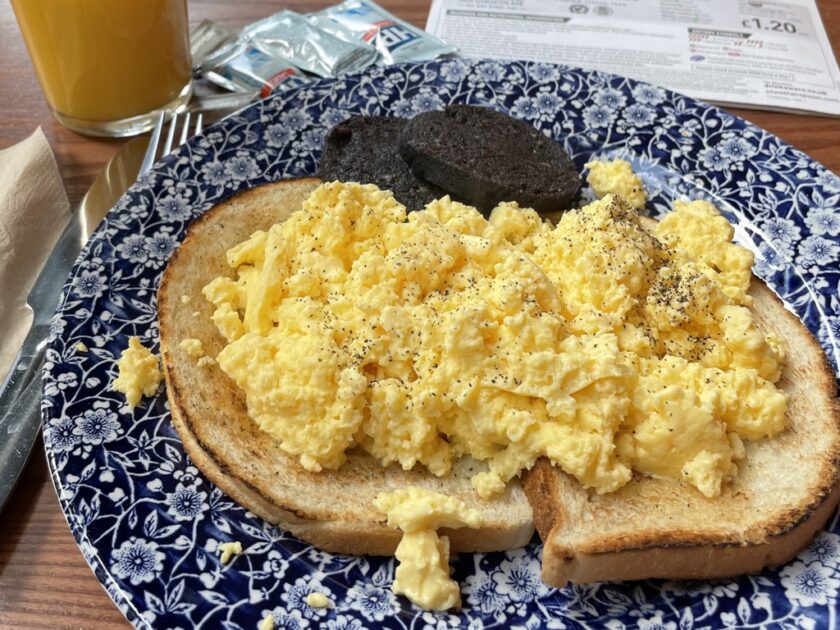 Eurostar security, although marginally better than at airports, remains a miserable experience. The one change compared to previous journeys was the inevitable stamping of the passport by the French border guards – a tangible reminder that, despite the presence of a high speed rail link to the continent, our damp little island is more isolated than ever before.

Once through security, the inadequate departure lounge offered nowhere to sit, largely thanks to travellers who had decided that the seats next to them were needed for their bags rather than their fellow humans.

Then came the announcement that the inbound Eurostar was late and boarding would be delayed while they prepared the train for its return journey. Resigned to an additional wait, we bought overpriced drinks from the café, as it was the only place that had room to stand.

Finally, about twenty minutes after it should have begun, boarding was announced, and a steady stream of passengers headed up the trav-o-lator to the platform. Our train was one of the newer e320 trains – the standard for the Amsterdam service, as they are the only type cleared to run in the Netherlands. We were soon under way, albeit about twenty minutes late. 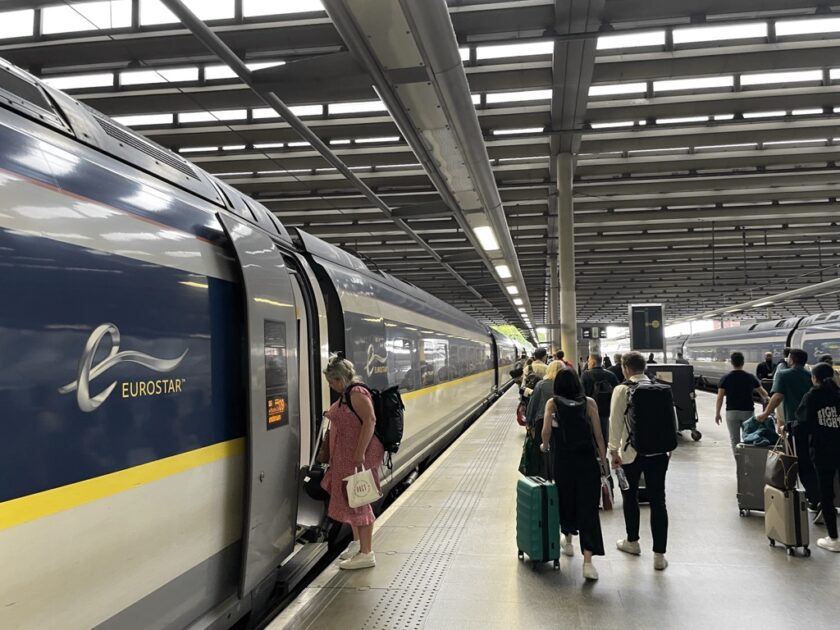 Leaving London behind, it wasn’t long before we approached Folkestone and raced into the Channel Tunnel. It is 28 years since it opened, but still remains an engineering marvel. I’ve done the journey several times, but the idea of diving under the sea and emerging 30 minutes later in France is still thrilling for me.

In a fit of extravagance, we had booked Standard Premier, meaning our trip to Amsterdam would be in a wider seat, with a light lunch served. Not long after we started moving, the catering staff started to come through with the food. Lunch was curried chicken with vegetable couscous and a bread roll, followed by a piece of cake. Perhaps not the most gourmet experience imaginable, but it filled a hole, and the mini bottle of wine was definitely welcome. £126 each was perhaps a bit expensive, but it was still a nice way to start the holiday. 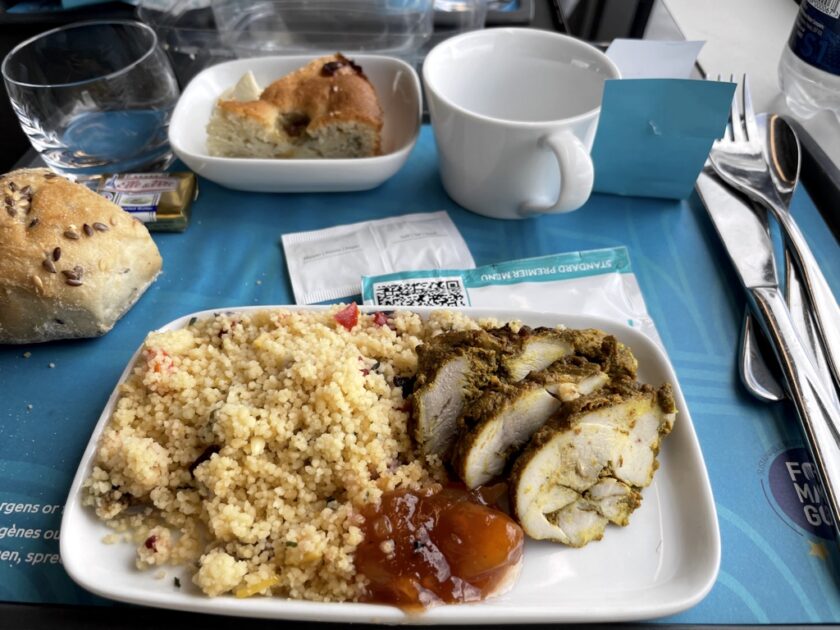 The Standard Premier seats also had individual reading lights, with a switch embedded in the armrest, that I managed to keep accidentally activating, much to Mark’s amusement.

Onward into France, and the thrill of the unfamiliar, as TGVs whizzed past the train window. A text message on my phone alerted me that we were now in France (and not charged for roaming, thank you GiffGaff).

Much of this journey was familiar territory for me. I had visited Amsterdam in March 2014 with my friend Ian, again by train. On that occasion I had to change trains at Brussels, using Thalys from there to Amsterdam.

This time, however, we stopped for just a few minutes at Brussels-Midi – just long enough to allow a Dutch train crew to take over for the onward trip to Amsterdam. The option of a direct train was a definite plus — the knowledge that I could sit in my seat and let the train carry me to Amsterdam, without having to worry about making connections, helped me to relax after a stressful morning.

The people who had a connection into the DB train to Cologne were not so lucky – their train was still in an adjacent platform when we arrived, but did it wait for connecting passengers? I hope so. 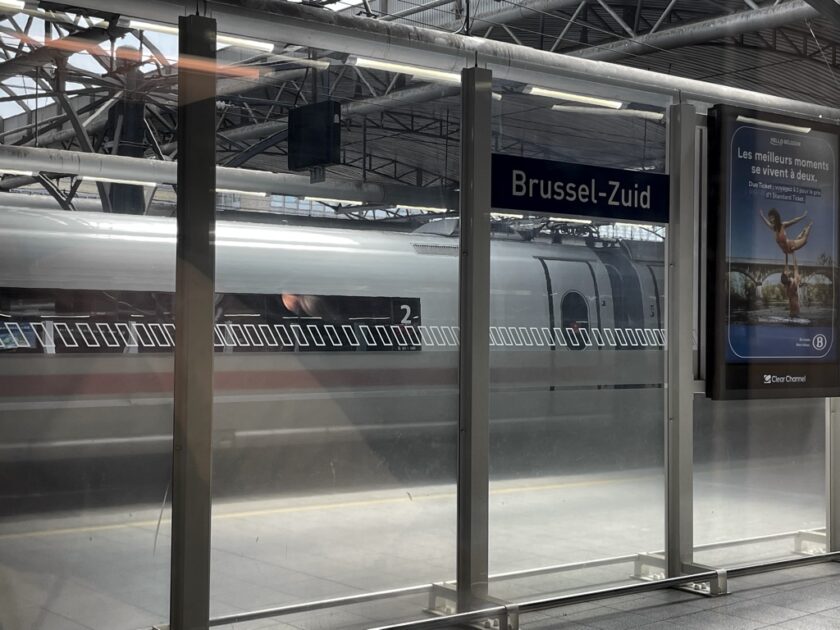 The scruffy SNCB local trains gave way to the smart NS Sprinter trains as we crossed into the Netherlands. A quick stop at Rotterdam, and soon after we rolled into the grand station at Amsterdam Centraal, a little over four hours after leaving London. Emerging into the afternoon sunshine, and almost immediately getting run over by a cyclist, we knew we had definitely arrived in the Netherlands. 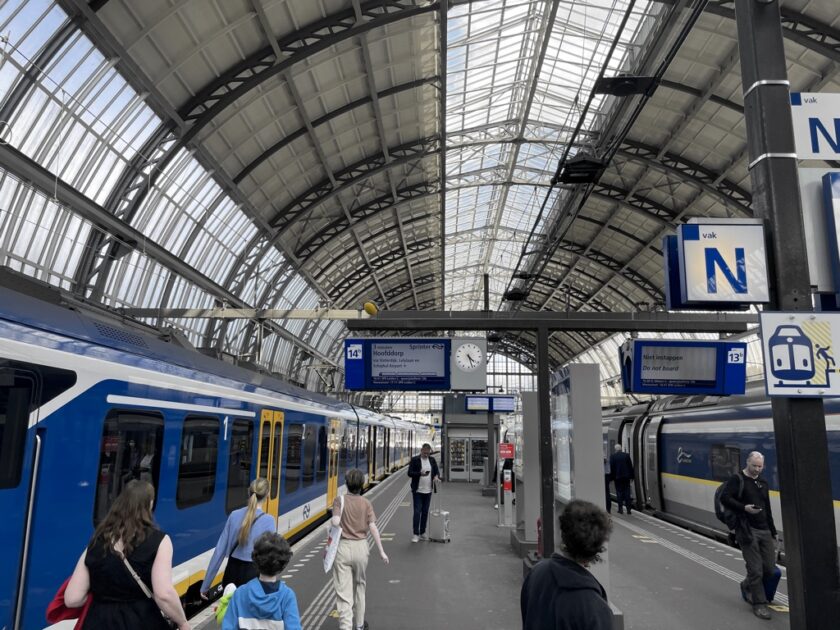 Eurostar is definitely a good alternative to planes for anyone travelling from London. It’s just a shame that journey times from elsewhere in the UK are uncompetitive, unless you are prepared to make the journey part of the holiday, like I was. Prices can be expensive too compared to the budget airlines, although a train carriage is definitely an upgrade from Ryanair.

There’s some good news on the horizon: Eurostar is adding an extra morning train departing London at 6:16, arriving Amsterdam at 11:11, from September 5. For the truly adventurous, a day trip would be (just about) possible. The last train back from Amsterdam is at 18:47, giving about 6 hours in the Dutch capital once check-in times are taken into account.

Having said that, 6 hours is nowhere near enough time to sample the delights of Amsterdam. We had two full days ahead of us – more on that next time.