It was a trip over two years in the making.

Way back in January 2020, I was busy planning another European train adventure in conjunction with my friend Mark. The central plank of this trip was to be Eurostar’s new direct London-Amsterdam service. After a couple of days in the Dutch capital, we would travel onward, again by train, to Berlin, for a further few days.

We were almost at the point of booking it. The only problem was that booking for the Amsterdam to Berlin train had not opened for the dates in the summer of 2020 that we wanted to travel. We waited impatiently, refreshing the Deutsche Bahn website several times a day to see if the trains had gone on sale.

Then, the world went mad. COVID swept across Europe, borders were closed, and train services were deemed off-limits to all but essential passengers. I continued to make plans, fully expecting all this to blow over in a few weeks, in time for the summer holiday period. After all, locking down for months on end would be ridiculous, right?

Even as the world started to open up again in 2021, limitations still abounded. Each country developed its own rules for monitoring COVID cases. Passenger locator forms, testing requirements, vaccine passports made international travel a bit of a faff. This was especially the case for train travel, where you might cross two or three other countries (and have to comply with each of their requirements) before reaching your destination country.

Fast forward to the summer of 2022, and things are, if not normal, at least a bit more manageable. Most countries have dropped their entry requirements, at least for people who are fully vaccinated. We could have a long debate over whether lifting those restrictions was a good idea, especially as COVID cases are on the rise again. However, the ending of restrictions did enable us to start planning again, and after much back-and-forth on our WhatsApp chat, we agreed a plan for our trip.

The plan: we would leave London on Tuesday 28 June on the 11:04 Eurostar to Amsterdam and stay there until Friday morning. We would then take the 09:10 Deutsche Bahn service to Berlin. After spending the weekend in the German capital, we would travel home on Monday, via Cologne and Brussels back to London. With multiple browser tabs open (including, of course, the indispensable Man in Seat 61) the trains were booked.

There was just one extra detail for me to figure out – namely, getting to London to meet Mark and his partner, Peter. The 07:00 departure from Liverpool would get me to London just after 9am. It would mean an early start to get the first Merseyrail service of the day into town, but nothing onerous. Phone alarm set for 5:15, an early night the evening before. I’m not a morning person (I’m not really an afternoon person either, come to think of it) but the early start would be worth it.

The 5:15 alarm didn’t quite get me up, but the 5:20 one did. I’m not sure why, but with my phone still in my hand, I loaded up National Rail to check the status of my train to London. 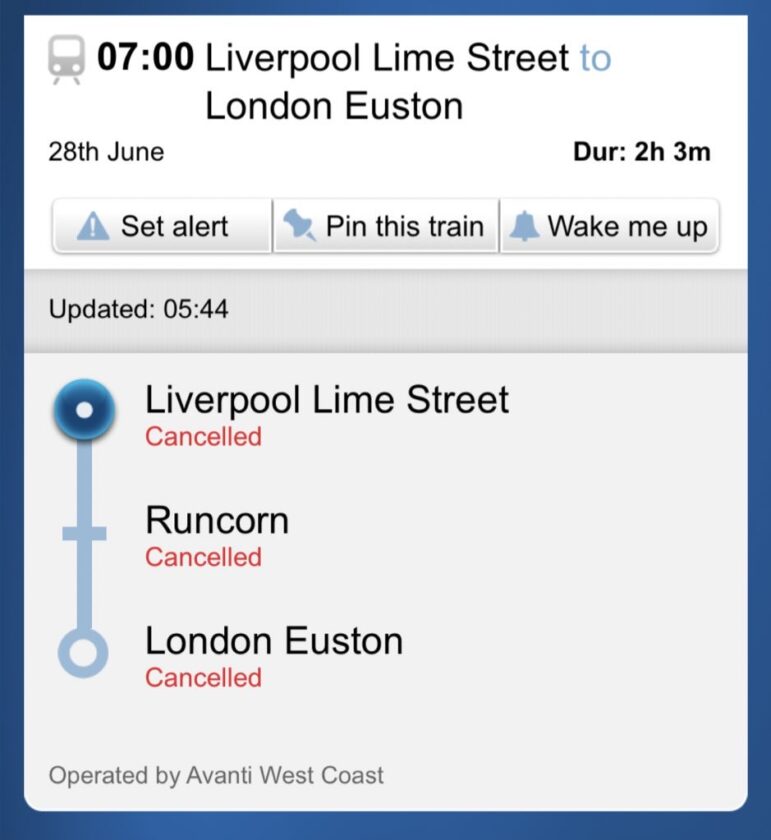 I did some quick calculations: the train after, at 7:47, would get me to London for 10am. That would be cutting things incredibly close to get to St Pancras in time to get through Eurostar check-in and security. The train before, at 6:05, would be the better option. But it was already close to 5:30 – would I get to Lime Street in time for it? I decided it was worth a try.

I grabbed my suitcase – luckily I had finished packing the night before – and dashed out of the house, unwashed and without having had any breakfast or even a glass of water. I would normally get the train into town to connect at Lime Street, but Merseyrail had not yet woken up.

I ran to the main road, hoping that a taxi would show up and I could flag it down. However, being before 6am, there was very little traffic of any description out on the roads. I considered ordering a minicab – but would one show up in time to get me to the station?

Then, I saw a bus approaching in the distance. Normally, the bus would be a slow option, but at this time of the morning, with no traffic around? It was worth a try.

I sat down on the bus, and felt moderately pleased with myself, until I checked Merseytravel’s real-time bus info app, which revealed that the bus would reach the Lime Street station stop at 6:03, a whole two minutes before my train was due to leave. Oh.

Would we get there in time? My nerves were not helped when we stopped en route for a couple of minutes, as we were running early. Of all the times for a bus to actually run to timetable, this was not one of them. But the traffic light gods were smiling on us, and the run into the city centre, usually an appallingly slow journey which involves waiting at every junction, proceeded quickly.

We pulled up at the stop at Great Charlotte Street right on time at 6:03. Luckily the ongoing road closure at Lime Street meant there was no pedestrian crossing to negotiate, and I was able to sprint up Skelhorne Street and into Lime Street station.

On platform 9 the train was ready to depart, with the guard at her door, and the platform staff poised to give the right away. I hurled myself through the doors of the first coach. The train started moving seconds later, before I had even found a seat to sit in.

Sweaty and unhappy, I went to the buffet car to grab a coffee, then slumped in my seat. This was supposed to be the trip that proved that international train travel could be an enjoyable and relaxing adventure. Things had to get better from this point on, right? 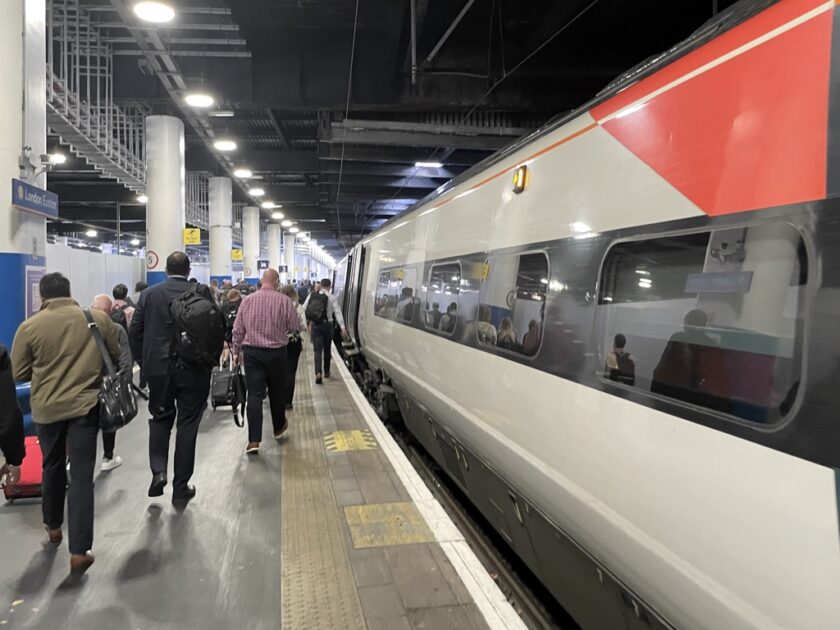