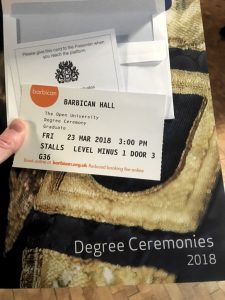 Back in November/December I wrote about my experiences of the Open University after I received my final degree classification (First Class Honours, not that I’m bragging).

It seems only appropriate to bring you part three in the trilogy, by blogging about my graduation ceremony.

(As an aside, I notice there have only been three blog posts in the five months between those and this one. Gah, sorry everyone. I will try to blog more frequently in future.)

I was with my mum, dad and older sister. We started the day in style, travelling down to Euston in first class on Virgin Trains, with mum in particular taking much advantage of the complimentary tea served with breakfast. Arrival at Euston was on time, from where it was a short tube ride to the venue for the day’s events – the Barbican Centre.

The Barbican wasn’t the only option available. The OU holds ceremonies all over the country; had I been prepared to wait until May, I could have gone to Bridgewater Hall in Manchester. But frankly, why settle for anything less than a capital time?

My friend Ian, who speaks of the Barbican Centre in reverent, hushed tones, was especially supportive of my choice.

Anyone who has been to the Barbican can confirm that is a rabbit warren of stairways and passages, but I soon found my way to the registration desk to pick up my tickets.

From there it was over to the robing area to pick up my gown. Putting it on and seeing myself in all the finery, things started to feel real. I was really doing this, graduating from University. Mum started crying for the first of many times that day. 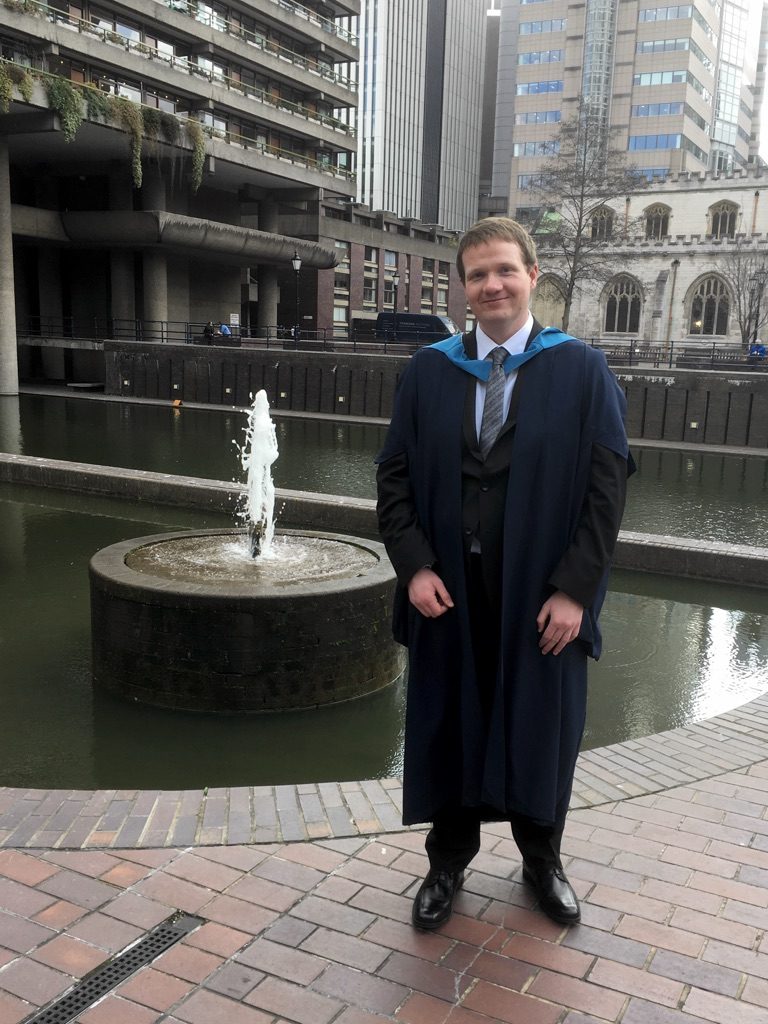 Some professional photos taken with a real comedian of a photographer, with additional comedy provided by the mortarboard which refused to stay on my giant melon of a head.

By the time we’d finished the photography, the morning ceremony had ended and the halls of the Barbican Centre were full of happy graduates. It was crowded, but the atmosphere was wonderful and I started to feel like I was part of something truly special.

We headed to the cafe where we enjoyed a cream tea. I wouldn’t normally bother to mention this, but Mum enjoyed the scone so much, it’s the first thing she talked about when discussing the day’s events with everyone.

And so, to the Barbican Hall, for the ceremony. Deep breath. 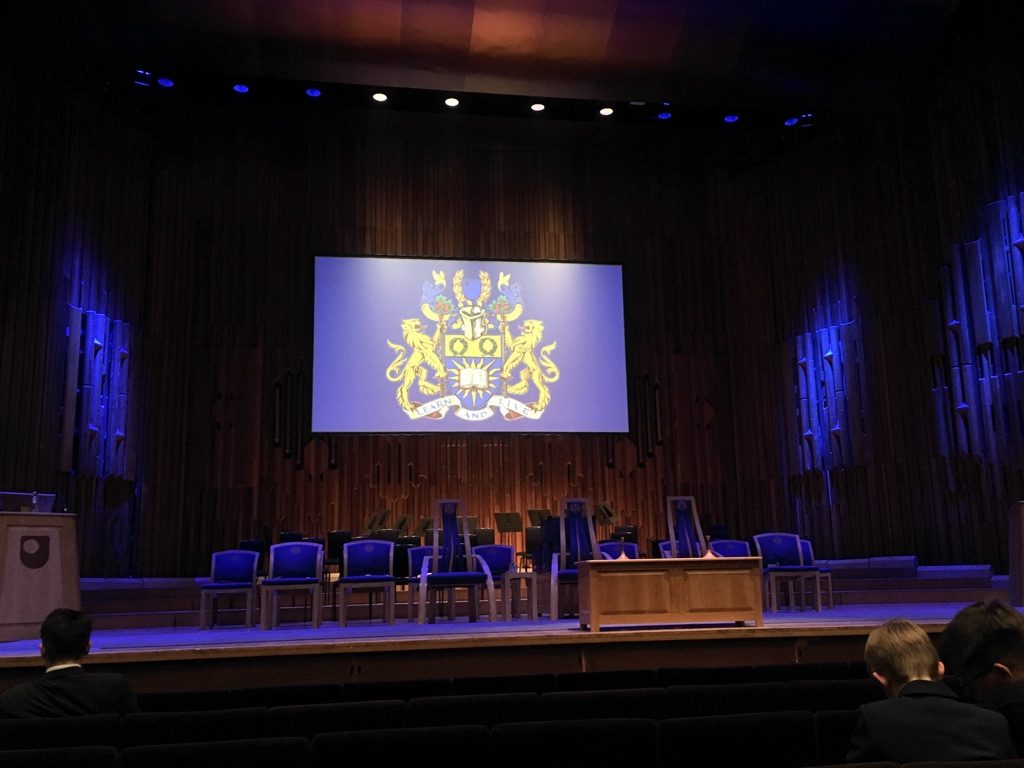 Taking our seats, we were serenaded by Westminster Brass, who performed a selection of music, including The Arrival of the Queen of Sheba, Edward Elgar’s Nimrod and… er, Happy by Pharrell Williams.

Then came an introduction vide, showing recent graduates discussing how their OU qualification has changed their life. People from all walks of life. It was at this point that the feels really started to come and a tear or two rolled down my cheek. Luckily the lights were down so no-one saw.

Two notable figures were honoured with an honorary doctorate: child poverty campaigner Carmel McConnell and human rights lawyer Ian Wise (himself an OU graduate). Both had inspiring life stories to share, but I am slightly annoyed that the graduates at Saturday’s ceremonies got Armando Iannucci and Eddie Izzard, who I’m sure would have been very entertaining.

The graduates are announced in order of degree classification, with Masters first followed by the bachelor’s degrees. The Science degrees came near the end. I must admit, when the moment came, it all passed in a bit of a blur. I concentrated so hard on not falling over. I have a vague memory of saying “thank you” to the Dean before she said “congratulations”, which was a bit wrong, but hey-ho.

And that was that. I walked out of the hall with my fellow graduates, ready to enjoy a celebratory glass of wine. Then the robes had to be handed back, and we headed back to Euston (via a meal at Prezzo which helpfully did not go bust before we went there to eat).

Home safe and sound after a long day. Still hasn’t quite sunk in that my OU journey is over. It’s all been a bit of a blur – a happy, happy blur. 👨‍🎓

Travelling home, clutching a bagful of merchandise from the OU Student Shop, I started to contemplate the day and what it meant. Before the ceremony, I had briefly got chatting to my fellow graduate sitting next to me – an older woman who had studied a Natural Sciences degree for no other reason than to satisfy her own curiosity. I felt humbled – I had taken my degree mostly to put some fancy letters after my name on my CV. The actual knowledge earned was very much a secondary consideration. After talking to her, and hearing the inspirational stories during the ceremony, my perspective had changed.

We live in an era of Fake News, where facts and knowledge seem less important than who can shout the loudest. Anyone who takes it upon themselves to learn and expand their horizons deserves plaudits. Let’s celebrate that.