Before reading the rest of this post, you need to play this jingle to set the mood:

Back in the summer of 2011, I was feeling miserable. I was stuck in a dead-end job with no real prospects. Turns out, you need qualifications for a decent career, and for various complicated reasons, I had left school with only GCSEs to my name.

People kept telling me I was “good with computers”. To be honest, I knew this already; my teenage years had been spent cooped up in my bedroom, knocking one out (a BASIC program) night after night.

But how to translate my hobbyist know-how into a piece of paper that I could show to employers? A look back at my tweets from the time shows what I was thinking of:-

Is the Open University a good route to a degree?

I was aware of the Open University, of course. As a kid, I occasionally stumbled across their output early Sunday mornings on BBC2 before CBBC started. The big advantage of the Open University is that (as the name suggests) anyone can sign up; no formal qualifications are necessary. After mulling it over for a while, I signed up for a BSc degree course. 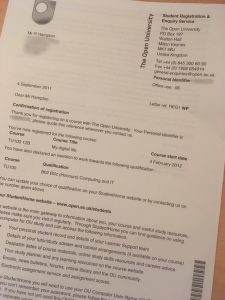 I still have the original letter I received on 4 September 2011, welcoming me to the Open University. I will admit, I wasn’t entirely sure what I was letting myself in for, but I was determined to give it a go.

The Open University is geared towards part time study. It is mostly distance learning, with most study done at home. Traditionally, textbooks and other materials were sent out in the post. Printed materials are becoming increasingly rare, however, and my last few modules were almost entirely online.

The degree curriculum is structured into three levels, with each level roughly equivalent to one year of full-time study at a traditional university. At each level you will study several modules, which will typically be worth 30 points or 60 points, depending on the amount of material contained within. Typically, each level takes approximately two years to complete. Earn 120 points at each level and you will eventually acquire the 360 points needed to earn an honours degree. At least, that’s how it works for the computing degrees – other study areas may be different.

So, from February 2012 until September 2017, many hours were taken up with study. Reading textbooks, writing notes, doing practical work, attending tutorials (both online and in-person), typing up assignments and studying for exams.

After all that work comes the anxious wait for results, a familiar feeling for me over the past few years as my grades make their way through ponderous bureaucracy and into my inbox. The waiting was particularly bad for me because I am my own worst critic and doubted my abilities. I could write the best piece of work possible, but I still feared a massive FAIL grade each and every time.

The final, FINAL wait ended on Monday, as I received the grade for the last module I studied. I got a Grade 2 Pass, meaning that, when combined with my other results, I can claim a degree. Not just any degree, but a first class honours degree.

"You may use the letters BSc (Hons) Comp & IT (Open) after your name."

I would be insufferable if I did that, everywhere, wouldn't I?

To say I’m proud is an understatement. I know I’ve worked hard for this. I’ve sacrificed a great deal to earn this degree. I sacrificed my social life, spending long nights in front of the computer when I would much rather have been doing something else. I endured sleepless nights worrying about exams, stressful times staring at an assignment question I just couldn’t crack.

There were certainly moments when it all got too much and I felt like packing it all in. I was inspired to press on, however, by a new ad released in 2015, which depicts people studying and earning a degree, overcoming the debilitating condition of having a Tom Odell song stuck in their head.

Now, all that is over and I can look forward to my degree ceremony next year. I’m leaning towards a glamorous afternoon at the Barbican Centre. In the meantime – while I wait for my certificate to arrive in the post – I’m updating my CV and looking for graduate jobs. The doubts are not entirely gone, but I’m certainly feeling a lot happier about my prospects than I have for a long time.

I’m also enjoying some of that mythical “free time” that people are always going on about. It’s quite nice.

Would I recommend the Open University? It’s not for everyone: studying part time in the evenings and weekends requires a lot of careful planning and hard work to fit in OU work around work and study commitments. But, for those of us who, for whatever reason, are lacking in formal qualifications, it’s an amazing institution, one of the few left that Britain can be proud of.

There’s a sad postscript to all this, however. I was one of the last tranche to study at the Open University under the old-style system, where a low fee is paid and financial assistance is available. From September 2012, the OU fee system was changed. It now costs about £2,800 per module for students in England, who must pay up front or obtain a student loan.

Had I started studying just a few months later, in the Autumn of 2012, I may not have been able to afford it. Small wonder that part-time student numbers have collapsed in the past five years. Hopefully this can be fixed so another generation can benefit from this valuable education system.