Empire of Light is a new film recently released, focusing on the staff of a slightly faded cinema in 1980s Margate, which I saw on Saturday night with Ben.

Queen Olivia Colman plays Hilary, the duty manager of the Empire cinema. She is friendly and personable, but also has mental health issues and is prescribed lithium by an uninterested doctor. She spends her evenings alone at home, and at work she forces herself to smile and go along with the banter of her co-workers. She is having an affair with her married boss Donald (played by Colin Firth) who is rather exploiting her vulnerability. Also on staff is Norman, the projectionist, played by Toby Jones. 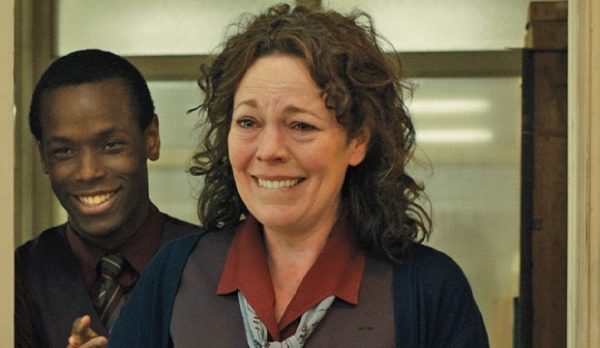 New employee Stephen (Micheal Ward) arrives and Hilary becomes rather smitten with him. The two embark on a relationship, but issues arise because of Hilary’s mental health and the racism Stephen experiences in the town, which Hilary finds difficult to cope with. Meanwhile, the run-down cinema is chosen for a gala screening of Chariots of Fire and suddenly a great deal of attention is focused on the venue.

It’s not the most exciting film in the world, but it’s hard not to warm to the characters (well, except for Firth’s sleazy cinema manager, but that’s intentional I think). Colman is excellent as always, and Ward is great too. And the film as a whole looks gorgeous — even the shots in the cinema’s derelict, pigeon-infested restaurant look amazing.

Director Sam Mendes has cooked up a lovely tribute to the classic cinema experience, one that was on the verge of dying out in the 1980s and has now disappeared in the era of the multiplex. Meanwhile, the frank depiction of racist attitudes means this isn’t just an easy slice of nostalgia.

Also — and I hope this doesn’t make me sound too shallow — Micheal Ward gets naked at one point and he has a very nice bum.