Western Approaches is a World War II museum, located in the basement of Exchange Flags, an office block in Liverpool City Centre.

During World War II, the building’s cellars were converted into a headquarters for the Battle of the Atlantic, the struggle to keep Britain supplied with essential supplies and equipment, as Nazi Germany’s U-Boats stalked vessels making the transatlantic crossing.

After the war, the complex was largely abandoned, and fell into disrepair until opened as a museum in the early 1990s.

The building was top secret at the time, and still seems to be rather well-hidden today, with many visitors to the city seemingly unaware of its existence. This is despite the big signs pointing to “TOP SECRET WARTIME HQ” – definitely one for fans of irony. 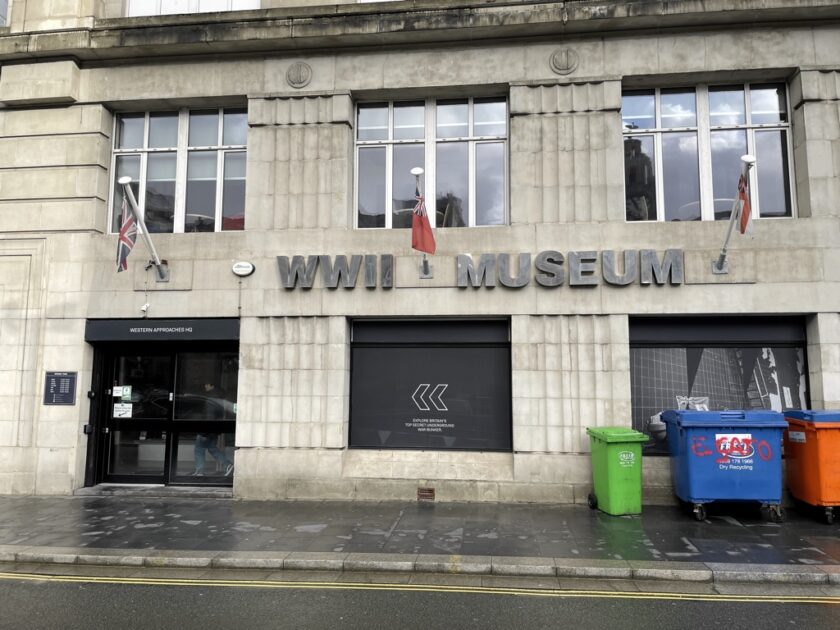 I visited a few years ago with my German friend (awkward) but when my boyfriend revealed that not only had he never visited, but had never even heard of the place until I told him about it, we both agreed a return visit was needed. So on Saturday afternoon we braved the rain and headed out to the museum.

I’m extremely glad that I went back again. The museum — now managed by Big Heritage — has been expanded since my last trip there, so there were lots of new things to see.

Admission is £13.50 for an adult, but that gets you a ticket granting access for a whole year – an excellent idea, as this is a museum that demands repeat visits.

One new feature was a recreation of a wartime street, with greengrocers and newsagents windows covered by anti-shatter tape, and most heartbreaking of all, an ice cream shop proclaiming that it was “Closed for the Duration”.

I enjoyed this replica poster, apparently produced by the town of Hove, instructing residents on how to conduct themselves in the time of crisis. 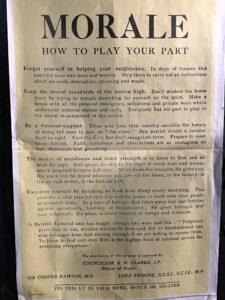 Click to enlarge and read the whole thing, but one paragraph in particular leapt out at me:-

Be a rumour-stopper. Those who love their country sacrifice the luxury of being the ones to pass on “the news”. Any patriot shoots a rumour dead on sight. Face the facts, but don’t exaggerate them. Prepare to meet them instead. Faith, confidence and cheerfulness are as contagious as fear, depression and grumbling.

The mayor of Hove there, predicting Twitter eighty years early.

There was a poster for a Liverpool FC match, and we were both amused to see it describing the team as playing in “Red Jerseys and White Knickers”. Sigh, if only that was the kit they played in today… 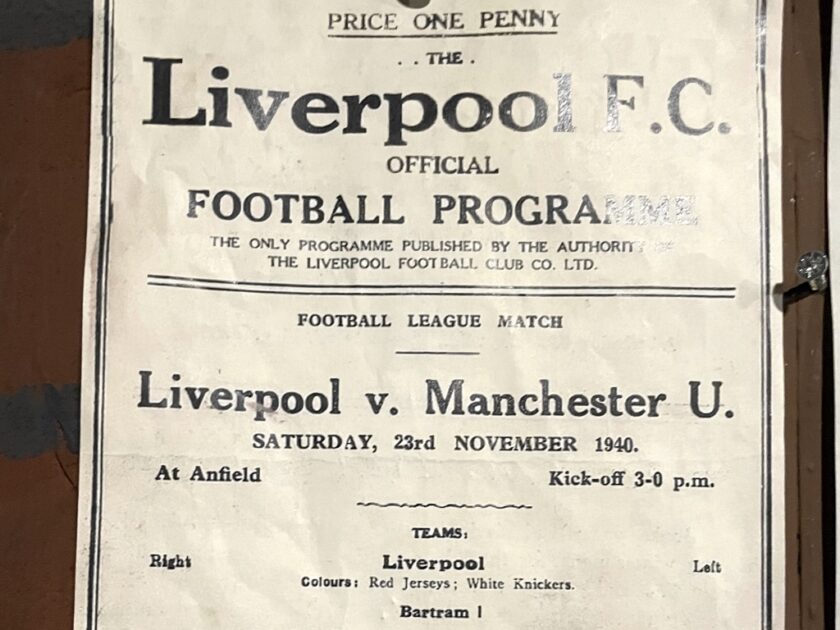 Where was I? Oh yes…

The tour route takes you round various side rooms. There’s a radio room where you can practice Morse Code; another where you can see the teleprinters that were used to send messages.

One nice feature of the museum is that many of the exhibits are not hidden away behind glass, they can be picked up and touched, played with. It’s good to be able to get hands-on rather than just reading dry descriptions on text labels. 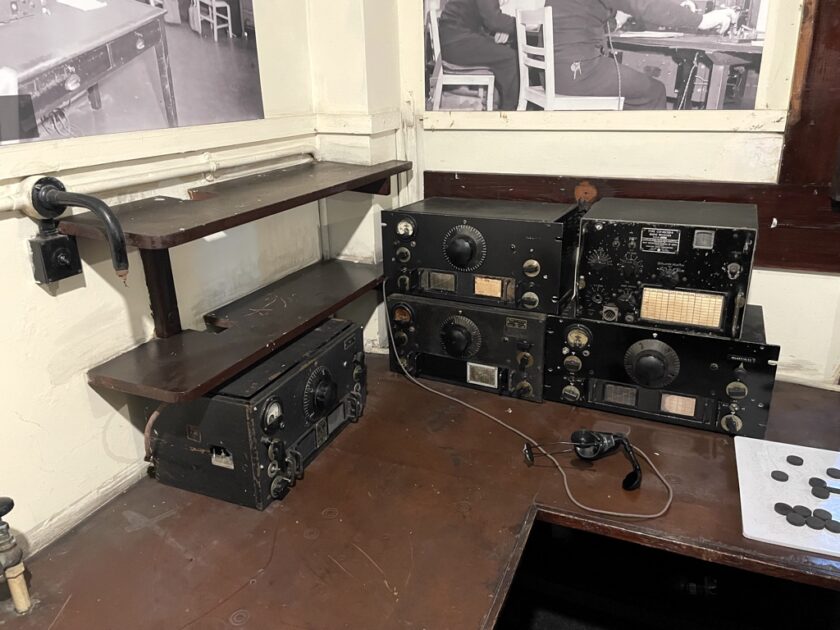 It’s probably worth mentioning that this isn’t 100% original – many of the rooms were stripped out when the site fell into disuse, so the equipment on show is from elsewhere or otherwise a replica. However, care has been taken to provide a reasonable facsimile, and that doesn’t take away from what is a fascinating slice of history.

The highlight of the museum is the Operations Room, where the movements of convoys bringing essential supplies across the Atlantic were tracked, along with the U-Boats that were stalking them. No computers or other hi-tech equipment here, just some magnetic symbols and chalk on a blackboard. 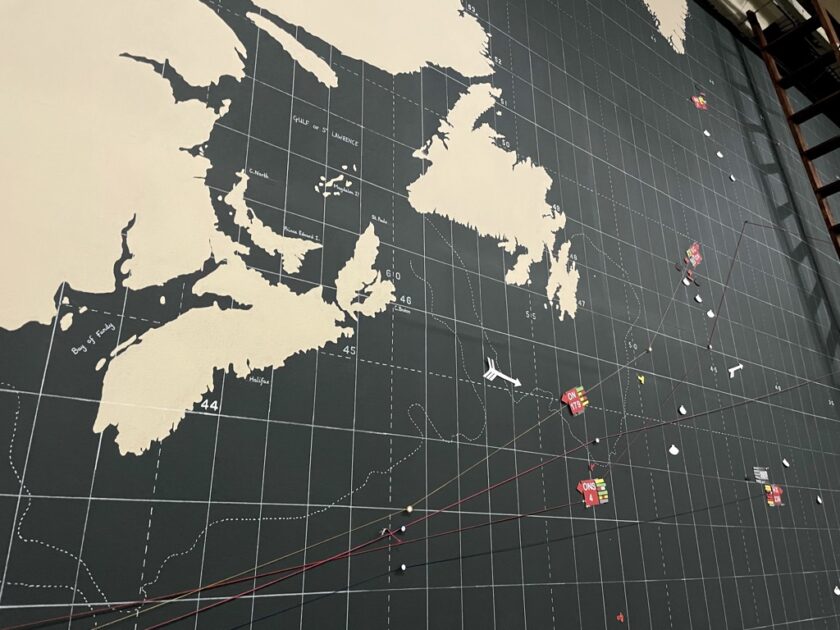 There is a lot of focus on the people who worked in these offices, many of whom didn’t share their stories until decades later, partly because they were constrained by the Official Secrets Act, and later because they were unaware of just how pivotal their efforts were to the war.

Confined underground in this claustrophobic environment for long periods, with bombs raining down all around, doing a very high pressure job. It’s important that they are remembered, and thankfully some of their stories are told here.

Part of the museum is dedicated to the WRNS, the Women’s Royal Naval Service (aka the “Wrens”) which was founded at the outset of the war. Exhibits told the story of those first pioneering women, who needed to prove themselves to men who often were not welcoming and in many cases threatening – one story tells of a Wren who was cornered by a male sailor and fought him off with a powerful slap to his face.

The rather surprising fact (to me, at least) was that it was only 1993 when the WRNS was finally disbanded and women were allowed to serve with men in the Royal Navy on an equal footing.

The museum is rounded off with free tea and coffee, which we sat and enjoyed while watching newsreel footage on a big screen.

And finally, there is a chance to see a bathtub allegedly used by Winston Churchill when he visited the complex. 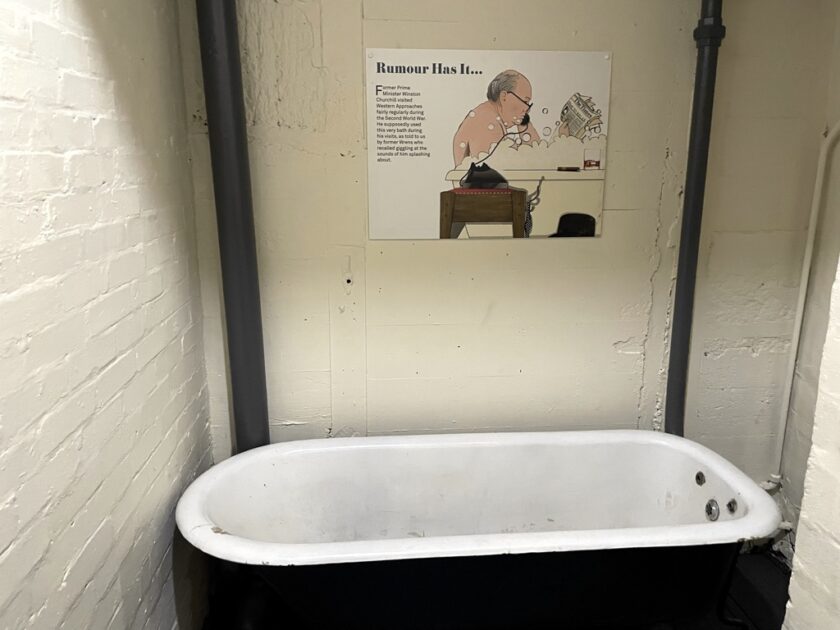 The Battle of the Atlantic was pivotal to the war effort, and this museum tells an important story. People who toiled away in secret beneath Liverpool’s streets to safeguard the merchant vessels. Undoubtedly they saved lives and helped the Allies to win the war. It’s good to see them remembered. 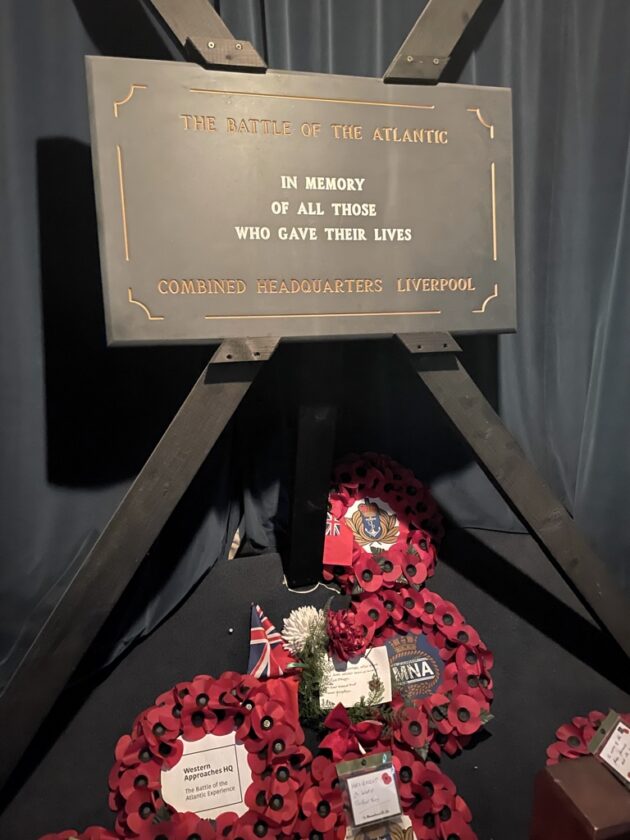