Shakespeare once wrote: “All the world’s a stage.”

But that’s ridiculous. If all the world is a stage, that would put theatres out of business, because no-one would ever need to visit one. What a silly thing for Shakespeare to say. Why are kids made to study this FOOLISH man in school?!

Luckily, wiser counsels prevailed, and plays continue to be produced on proper stages. Here are some I saw this year, including some very mainstream hits and more… esoteric fare.

THE BOOK OF MORMON

Nine years after I saw it in London, The Book of Mormon visited Liverpool as part of its 2020 tour (Covid may have caused one or two slight delays), and was just as outrageous as I remembered.

Elder Price, a devout young Mormon missionary, finds his faith strongly tested when he is paired up with the well-intentioned but clumsy Elder Cunningham and shipped off to Uganda to do his missionary work. Elder Price struggles to convert any locals, who are preoccupied with poverty and the attacks by the local warlord on their village. Elder Cunningham has a bit more success, but only by compulsively lying to the villagers, a tactic which backfires quickly.

All this is punctuated with some of the most offensive lyrics ever heard on stage. It’s by the creators of South Park in collaboration with the co-writer of Avenue Q, so that is not unexpected. Blasphemy has never had such a catchy tune. I guarantee you will leave the theatre and be singing “I have maggots in my scrotum” all night.

Draq Queens! Gay politics! Male nudity! (Only from the back though, boooo)

The opening scene, in the dingy toilets of a dingy Scouse gay bar, sets the tone for the rest of the night. Drag act Cherry Jezebel has won an award, but behind her persona is a great deal of pain and anguish. This play picks apart gay life in Liverpool. With a drag queen centre stage, there are of course some razor-sharp lines, as well as much darker moments as Jezebel’s world threatens to crumble around her. Really good.

My boyfriend Ben dragged me to That London to see this, and I am extremely glad he did.

A musical set in the aftermath of 9/11 sounds, on paper, like a dreadful idea, but Come From Away only tangentially focuses on the awful events in America. Instead, it concentrates on the true story of Gander, the small Canadian town that found itself inundated with stranded passengers after dozens of transatlantic flights were forced to land at the nearby airport.

The tale is told through the eyes of the locals, pilots and some passengers, with the cast members playing multiple roles. A beautiful show that showcases the best of humanity, on a day dominated by the acts of the worst.

It isn’t all uplifting – a pilot laments that the planes she so loves have been used as weapons; a Middle Eastern man gets a much frostier reception than many of his fellow passengers. But overall the show is a wonderful, joyous experience. A scene set in a lively bar, where the passengers become honorary Newfoundlanders, by kissing a fish, is a highlight.

If you enjoyed the 1994 film starring Ray Liotta and Whoopi Goldberg, then… that will have absolutely no bearing on your enjoyment of this play, because it’s a completely different story that just happens to share the same title.

The Corrina of the title is following in her father’s footsteps by signing up for duty on a cargo ship. She finds tension between the officers and the Filipino crewmen, who are underpaid, overworked and mistreated. In the cramped environment, it isn’t long before tensions boil over and things turn violent.

Written by Chloe Moss and directed by Holly Race Roughan, this play premiered at the Everyman and was a spectacular success, getting good reviews across the board.

Did I enjoy it? Yes. Did I find the Instagram of one of the attractive actors, James Bradwell, and immediately start following him? Also yes.

Liverpool’s legendary gay bar gets recognised on stage at long last, in this play that showed at the Epstein Theatre in late November.

Mike is a closeted gay man in 1980s Liverpool – probably not the best life to be living. His friend Tony leads him to the Masquerade and shows him the completely different world that exists within its walls. Initially shy and intimidated, Mike soon becomes good friends with the club’s owner and resident drag act, before becoming the club’s DJ. But the spectre of homophobia is ever-present, and tragedy strikes. Plus Mike has to deal with how to come out to his tough, man’s-man father.

There’s more to tell, but I’m hazy on the details. I was a bit distracted. Ahem. It was an amazing show though, and ended with us all getting up and dancing, which was nice.

At the Epstein Theatre to see the play “Masquerade” and enjoying it very much. pic.twitter.com/GrVcKxlwcu

SHAKESPEARE?! How did you get in here?!

Actually, maybe his point about all the world being a stage wasn’t so far off the mark after all. Sefton Park Palm House found itself pressed into service as a dramatic backdrop for this production by Illyria Outdoor Theatre.

I have a suspicion of old Bill’s plays, instilled in me when I had to study them in school. However, it turns out that Shakespeare’s plays are entertaining when you aren’t being forced to analyse every word of one for your GCSE English coursework. Who knew?

Nathan Smith with his booming voice seemed to be channeling Brian Blessed, but he and all of the cast were great. It’s always nice to see an actor giving you their impressive Bottom.

An added frisson of drama came when someone’s drone flew right overhead towards the end of Act Two. Were they trying to illegally record the show and avoid paying for tickets? (er, no)

THE MP, AUNTY MANDY AND ME

It was a trip over to Manchester and the Hope Mill Theatre for this one-man show, starring Rob Ward as Dom, a young gay man whose social life is rather hampered by being in a small village miles from any other LGBT people. Things change when he is noticed by his local MP who offers him a job on his staff. However, the MPs intentions are less than pure, and it soon becomes clear that he wants more from Dom than a social media expert.

This is a tale of grooming and sexual boundaries (an abuse survivors’ charity advised on the script and supported the show). Despite that subject matter, there are a few laughs to be had along the way. A thought-provoking show which was definitely worth braving weekend Northern Rail for. 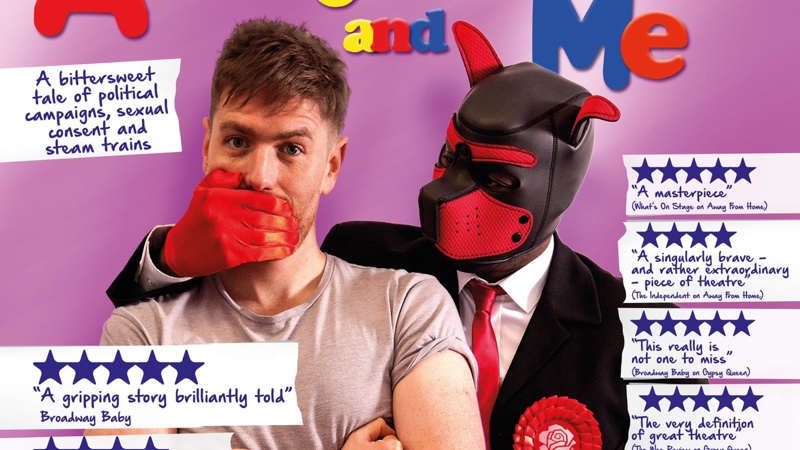 This play by Wes Williams was performed at the Hope Street Theatre in 2021 before transferring to the Epstein Theatre in 2022 for a one-off performance, which was where I saw it with my friend Phillip.

A rather harrowing, dark portrayal of the life of playwright, Joe Orton, who was murdered by his partner Kenneth Halliwell in 1967. The play explores the background to that event and the lives leading up to that point, where Orton achieved great success with his plays but also experienced great poverty, a turbulent lifestyle and mental health issues.

Not an easy watch by any means, but an interesting play, well written and well performed by a cast of four who handled the subject matter well.

RETURN OF THE RAINBOW MONOLOGUES

Grin Theatre were responsible for Orton: Fallen Angel, and they returned later in the year with another set of LGBT-themed monologues for another year. This time they performed in the Royal Court Studio (the theatre’s “downstairs bit”). Four actors delivered a variety of monologues, touching on life, laughs, loss and all the emotions in between.

Monologues, in the wrong hands, can end up looking a bit A-Level Theatre Studies, but these were powerful, well performed, and struck a chord with me. I really hope they come back for more in 2023. 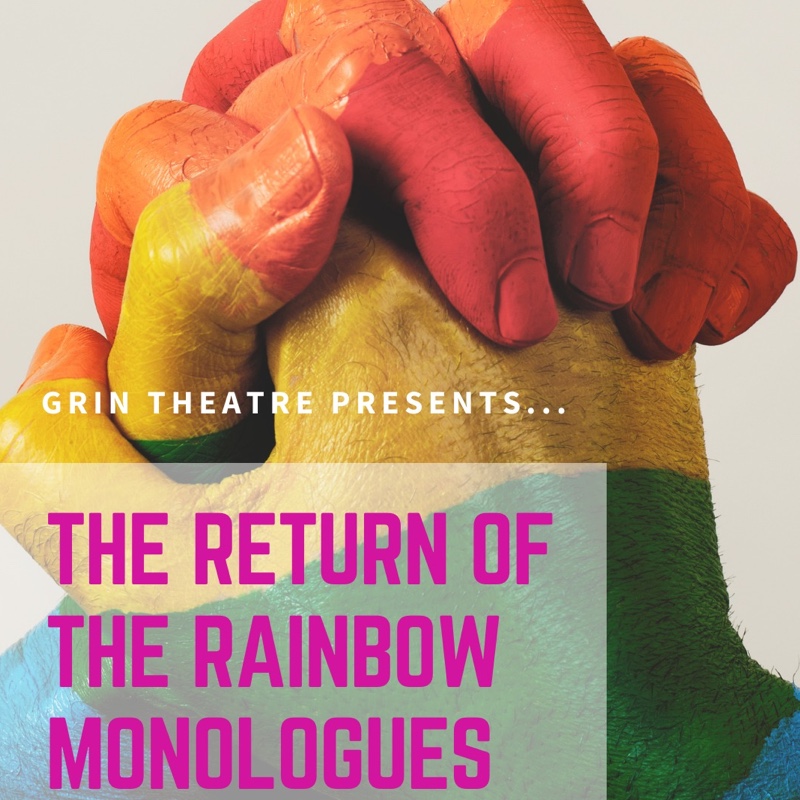 Sneaking in just before the deadline – I saw this on Tuesday!

The classic film, with songs by Irving Berlin, is transplanted to the stage. Song and dance duo Bob Wallace and Phil Davis travel to Vermont, where they arrive at the lodge owned by their former commanding officer during World War II. The lodge is in dire financial straits and the duo agree to put on a big show to pull in the punters, calling in their showbusiness pals and roping in their old army buddies as an audience.

The show stars Jay from The Wanted, Sinbad from Brookside and Lorna Luft from Judy Garland. All are excellent. Sweeter than an explosion at a Haribo factory, this is a lovely feel-good show, perfect for the festive season. Again, I have to thank the bf for suggesting this; I would never have gone to see this of my own volition, but I’m glad I did, because I enjoyed it.

Lovely evening seeing “White Christmas” at the Liverpool Empire with the bf. Jay McGuinness and Dan Burton great as the two leads. Lorna Luft and Michael Starke excellent too. pic.twitter.com/3O5Jyf0tIy

2022 was a good year for me and the theatre, and I already have two shows booked and in the calendar for 2023, so expect more of this nonsense from me in the future.

One thought on “Twenty Twenty Two… A Re-Do… Part Two”