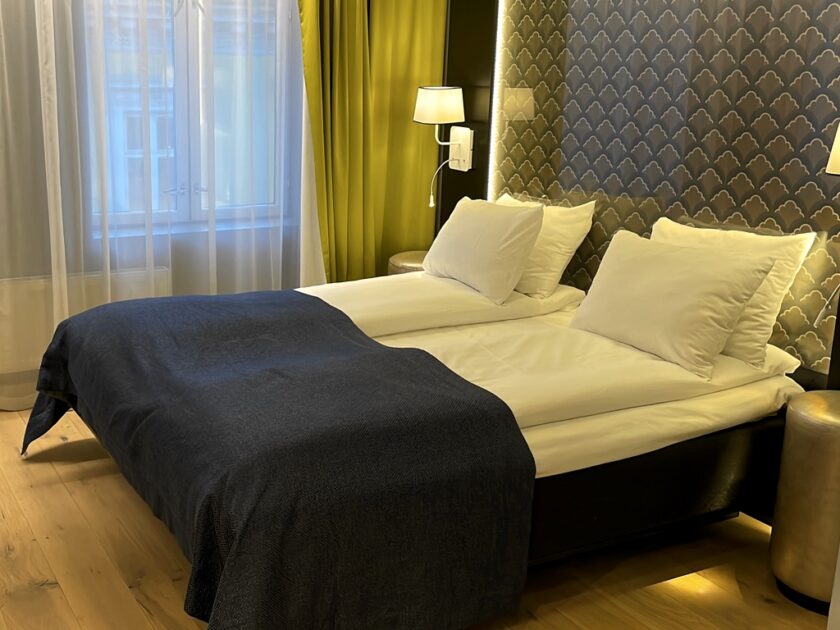 A couple of hours later, I was suitably recharged. With a 24-hour Ruter ticket loaded onto my phone, I headed out into the city.

One of the recommendations I had received was to have a ride on tram 12, which crosses the city and passes many of the main sights en route. I found the stop, amidst the slightly bewildering Jernbanetorget interchange, and didn’t have to wait long for a tram.

We glided along the streets, passing the National Library en route. 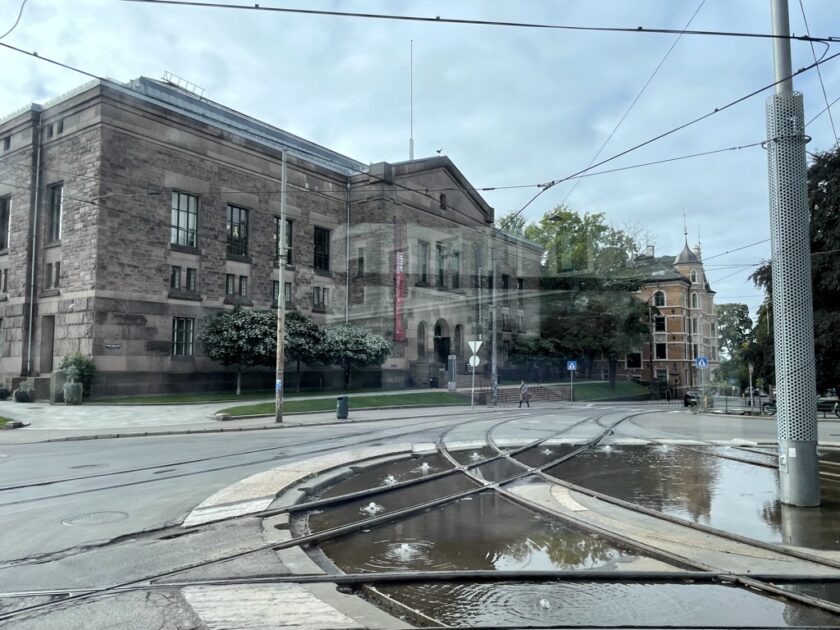 The tram dropped me off in Majorstuen on the edge of the city centre, a district with some delightful buildings, and some pleasant green spaces with sculptures on show.

One of Majorstuen’s main attractions (for me, at least) is the Oslo transport museum. Which was closed. In fact, careful research revealed that it was open every day that week I was not in Oslo. I had to content myself with a couple of photos taken through the windows of the closed museum. Sigh. Next time.

Rather than take the tram back to the centre, I headed for the Tunnelbane – the Oslo Metro. I could have headed straight back to the city centre, but the map revealed a fascinating anomaly – line 5, which starts out in the suburbs, then does a circuit of the central Ringen, calling at ten stations twice before heading out to the terminus. 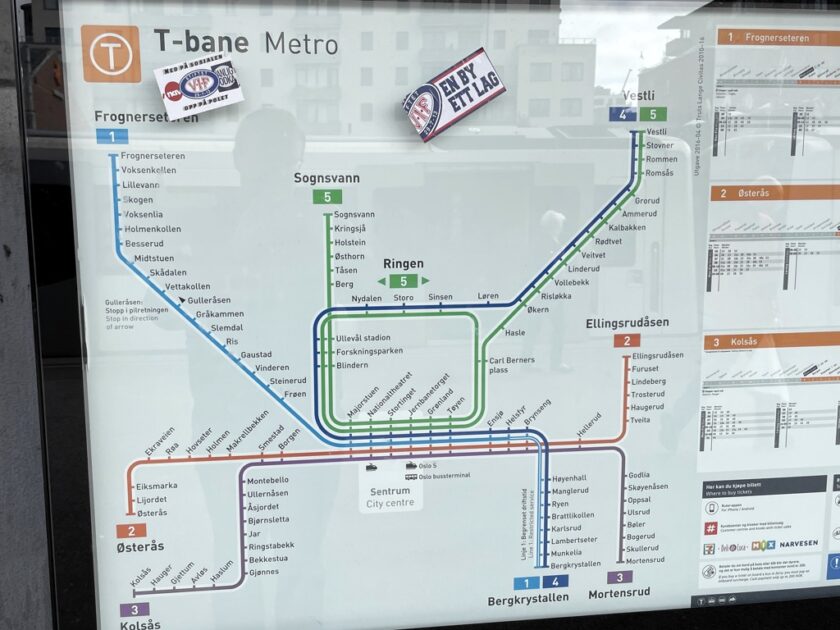 The T-Bane is mostly very clean and tidy, with trains boasting that they were designed by the Porsche Design Studio, no less. A line 5 train via Ringen rolled in, and I naturally hopped aboard. We went right around the circle line, finally arriving at Nationaltheatret station about 15 minutes later. I alighted and the train continued on to Majorstuen. Again.

From Nationaltheatret I headed to the nearby Royal Palace, set in the Queen’s Park. The most surprising thing to me was that the palace is not cordoned off behind high-security fencing. Members of the public can wander around and walk pretty much up to the main building itself. 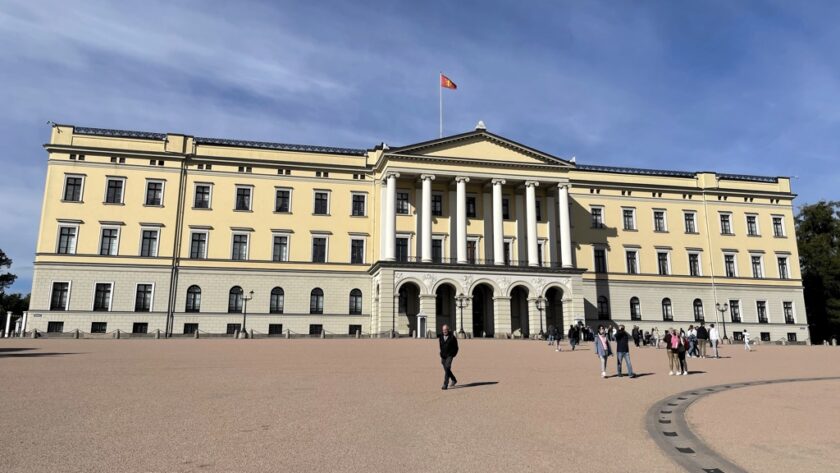 Yes, there are guards, and one of them told me off for trying to take a photo of a part of the building that I thought was architecturally interesting, but was seemingly protected by the Norwegian version of the Official Secrets Act. Still, it’s difficult to take a soldier seriously when he is wearing a hat with a clump of feathers in it.

The park itself is lovely, although I waited to take more photos until I was a suitable distance from the palace itself, in case the soldier decided to follow me and arrest me. 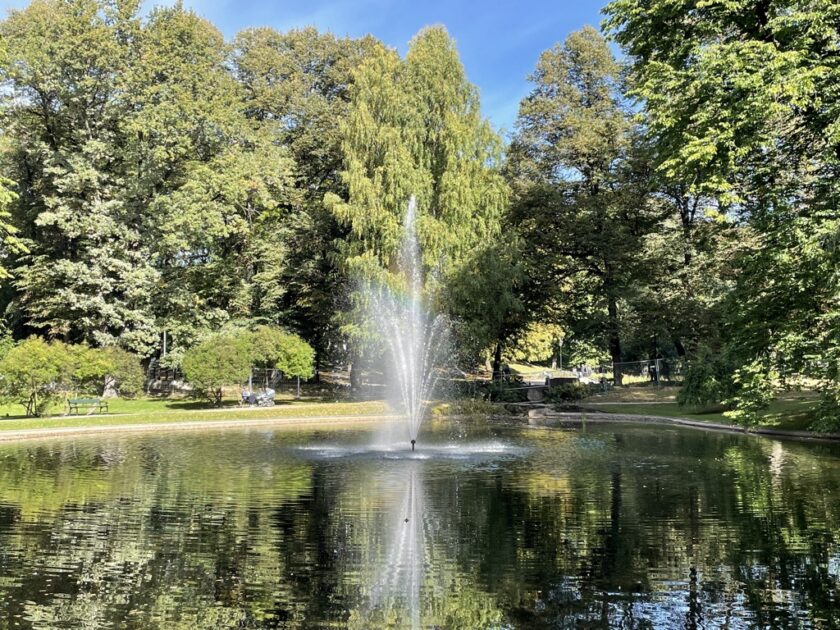 Leaving the park, I wandered down to the nearby harbour. There is a cluster of museums on the Bygdøy peninsula, just outside the city centre, and I wanted to visit at least one of them. There is a frequent bus service, but I thought a ferry ride would be more fun.

Oslo has several ferry routes that operate alongside the buses, trams and metro as part of the city’s transport network. Annoyingly, the Bygdøy ferry is not one of those – it is privately operated and does not accept Ruter tickets. I had to fork out again for the ride over. Bah.

Still, the ferry ticket was worth it for the great views of the city and the big ships docked at the cruise terminal. Cruise passengers are big business for Oslo, although not all the locals appreciate them – during my stay, I saw several stickers and fly posters attacking them as being “not real tourists” or similar.

The Norsk Maritime Museum was a fun way to while away a couple of hours. Norway has long been a seafaring nation, and a workshop in the basement was attempting to construct a replica boat from the days of the Vikings.

A thousand years of maritime history is comprehensively covered, telling the story of Norway on the seas in exquisite detail and taking us right up to the cruise liners and giant container ships of the present day.

One of the most impressive parts was a recreation of the interior of an old steam ship. It was interesting to compare the opulence of the first class cabins with the rather more rudimentary steerage accommodation.

There was also an exhibition on Jan Herman Linge, a Norwegian designer of sailing boats. He designed multiple boats that were used in Olympic competition, some of which were on show. My favourite, however, was the diminuitive (and brilliantly named) “Dingy-ling”.

It’s also nice to know that Liverpool isn’t the only city that has troubles with aggressive seagulls. 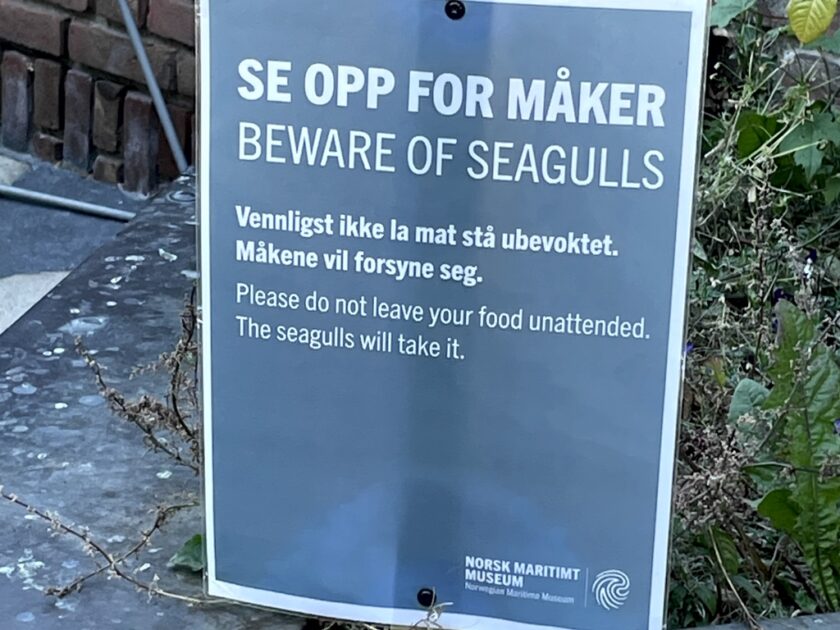 I caught the bus back to Oslo city centre, and after a quick bite to eat in Burger King — yes, I know I’m not exactly sampling fine Norwegian cuisine here — I pondered how to spend the rest of the night.

I then remembered a tweet I received from one of my Twitter pals, Tom Crame, earlier that day. Having seen I was messing about on the Metro, he recommended going up the Holmenkollen.

The Holmenkollen Line (T-Bane Line 1) is something of an oddity. Opened as a tram route in 1898, it was converted to Metro operation in the 2000s. Over the course of its fourteen kilometre route, it climbs steeply, reaching an elevation of 469 metres at the terminus at Frognerseteren.

I entered the underground station of Jernbanetorget, where the passageways and platforms had been decorated with works by LGBT+ artists. Oslo was still reeling from the terrorist attack on LGBT+ venues a few months earlier, and this was one of the many ways that the city was expressing support and solidarity with the LGBT+ community.

The train was quiet. The Holmenkollen Line is reportedly the least busy line on the system anyway, and late in the evening my only company was a group of annoying teenagers who were just a bit too loud. 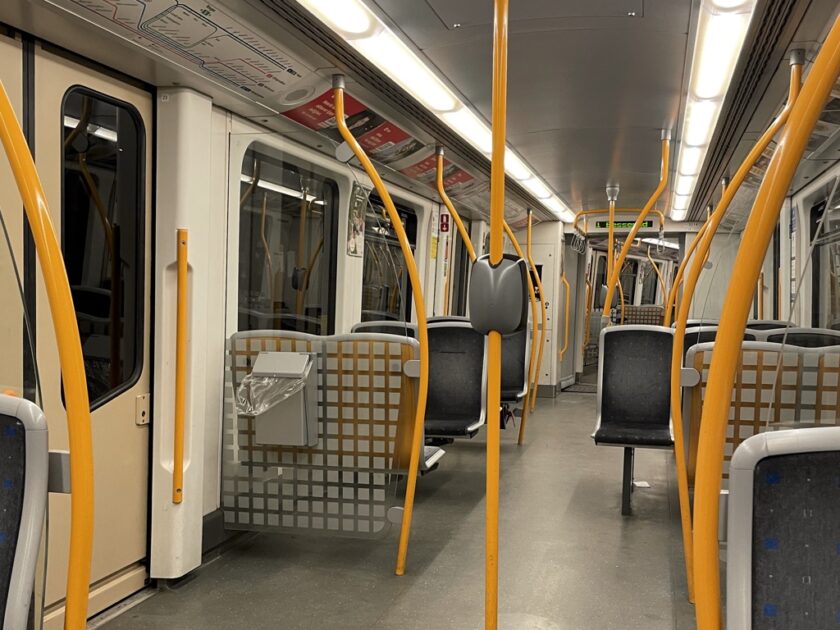 As we left the central section of the Metro, the character changed dramatically, and the line looked more like a regional branch line than a metro line in a capital city. Due to some penny-pinching during the metro conversion, most of the stations still have short platforms intended for use by trams, so the three-car metro trains have the rear doors locked out of use for most of the journey up the branch.

I reached Holmenkollen, which is not the terminus, but certainly the focal point of the route, serving the nearby Holmenkollbakken, the giant ski-jumping site which has hosted world championships and the Winter Olympics. 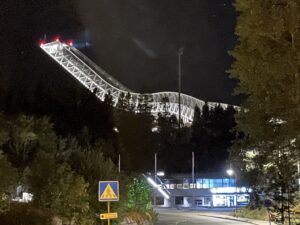 It’s an impressive structure, but I know nothing about ski-jumping, so cannot really add any more to this picture. Looks nice though.

Nearby, some impressive views were available looking back down onto Oslo. I wished I had come up here during the day, as my phone camera didn’t really do much for the view at night. I wandered up and down the streets for a bit trying to find the best view, but most of them would have involved pointing my phone camera into people’s gardens, and that was an argument I didn’t really want to have. 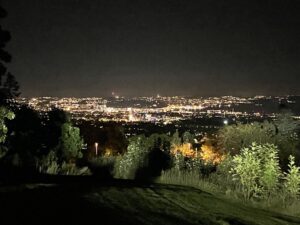 As I returned to the station for the return journey, one thing did occur to me: Ruter has removed ticket machines from its stations, telling people to buy using the mobile app or from a local convenience store. However, this station was in a mostly residential area and there were no shops around that I could see. If someone doesn’t have a smartphone, are they completely unable to buy a ticket? This struck me as a bit of a gap in provision – yes, lots of people have smartphones, but some are unable to purchase because of cost, or are just unwilling to learn a new technology. These people are definitely at a disadvantage.

Such thoughts played on my mind as I travelled back downhill to Oslo, and retired to bed. My trip to Norway was drawing to a close, but despite the few glitches along the way, overall I had had an amazing time. I wasn’t looking forward to returning home.