Note: I started writing this blog post last week. In the interim period, Netflix has decided, again, to provide a platform for obnoxious transphobia. My blog post is specifically about Heartstopper and nothing else, but I need to acknowledge that the platform that produced this beautiful programme is also pumping out some hacky anti-LGBTQ dreck.

The news that Heartstopper got renewed for two more seasons made my own heart skip for joy. The show, based on a series of graphic novels, based on a webcomic by Alice Oseman, has quickly become one of the most talked-about shows of 2022 so far.

For the uninitiated, Heartstopper follows Charlie, a gay teenager at an all-boys secondary school, who gets paired up with Nick, a boy from the year above. When Charlie joins Nick on the rugby team, a friendship quickly blossoms and develops into something deeper, as Nick is forced to confront his own sexuality. 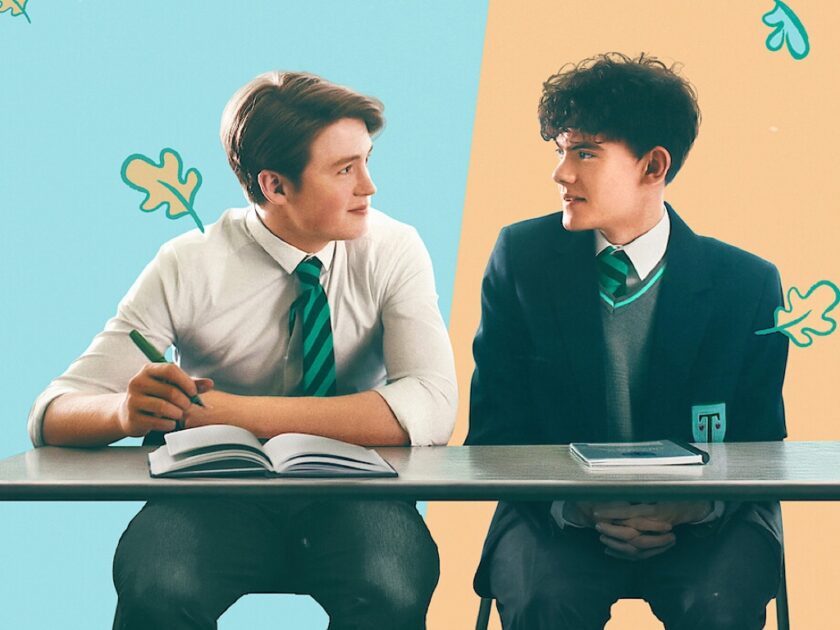 Along for the ride are Charlie’s friends Tao, who frets about losing his geeky friend to a world of sporty lads; and Elle, a trans student who recently transferred to the local girls school. I hope we get to see more of them in season 2, and that Yasmin Finney (who plays Elle) can fit the show around her Doctor Who filming schedule. Look out for a small role from National Treasure Olivia Colman as Nick’s mother.

Anyone who has seen a gay coming of age drama knows what tropes to expect, but Heartstopper avoids many of these, or at least in dealing with them in a predictable manner. There is no sex (which, given the characters’ ages, is appropriate), and very little homophobia for the main characters to deal with. Although it is hinted that Charlie was bullied, we only really see one homophobic boy on screen, and he is treated as an outlier among a largely accepting crowd. Instead, what we get for the most part is a sweet and uplifting romantic comedy.

Although, like the comics, the show is aimed mainly at the teen/young adult market, it seems to have resonated with a lot of older LGBT people too. Owen Jones wrote an excellent column about it recently (some spoilers for the show in that piece). Many people, myself included, enjoyed the show, but feel a tinge of sadness that they never had the same joyous experience of young love that Charlie and Nick have.

The recurring theme of the reviews is, “I wish a show like this had existed when I was a teenager.” But a show like that couldn’t have existed when I was a teenager. In the 1990s, section 28 prevented any discussion of homosexuality in schools – preventing teachers like Mr Ajayi from offering help and support. There were no laws against discrimination, no policies against homophobia. Charlie and Nick would probably have experienced brutal bullying while navigating their relationship. There would certainly be no public displays of affection at a bowling alley.

It’s important, also, to remember that life is still not easy for LGBT people. When the “paper of record” is happy to report approvingly on anti-trans comments from a Government minister, it shows that there are still battles to be fought, progress to be made and resistance needed against slipping backwards on LGBT rights.

But, as the culture wars rage on, and right-wing commentators rage against “woke”, it’s nice to think that a generation of teenagers are seeing Charlie, Nick and their friends, maybe recognising themselves and realising that life may not be so bad after all.

And what a joy it is to see a gay story on screen with an unambiguously happy ending.