What was I doing during 2021, apart from not-blogging? Well, because I’m a dynamic go-getter, I spent a fair amount of time slouched in front of the telly. In no particular order, here are some television events or products that I heartily endorse:

It’s a Sin (Channel 4)
Surely Russell T Davies’s finest output yet, probably because it is the most personal work he has ever done. An unflinching look at the AIDS epidemic of the 1980s, told with humanity and heart. I laughed, I cried, I raged at the burning injustices – hospitals that locked up patients; the uncaring, ignorant press and the parents who abandoned their children.

There are bravura performances from Olly Alexander, Keeley Hawes, Lydia West, Callum Scott Howells, Omari Douglas, Nathaniel Curtis, David Carlyle and many more. A debate was sparked about whether LGBTQ characters should be played by LGBTQ actors. While I understand the arguments, I have to say that I don’t think straight actors could have brought the needed authenticity to these roles.

Also, there’s numerous opportunities to spot Liverpool doubling up as 1980s London. Watch it, but be warned: you’ll never be able to listen to Hooked on Classics the same way again. Available on All4.

Freddie Mercury: The Final Act (BBC Two)
A good companion to the previous show, this documentary commemorated the 30th anniversary of Freddie Mercury’s death, with contributions from friends, family and his Queen bandmates. Again, you will be furious at some of the archive clips featured, including David Blunkett attacking the singer’s “bizarre lifestyle”, but there is also the uplifting tale of the tribute concert at Wembley, attended by the great and the good of the music world. Available on BBC iPlayer.

Deutschland 89 (More4)
The superlative German spy series returned for one last hurrah. Beginning with the Berlin Wall (spoiler alert: it falls) and tracking across Eastern Europe as East German agent Martin Rauch (Jonas Nay) has to deal with the collapse of his country, the consequences of his previous actions, and keep his son safe. Perhaps a bit disappointing compared to the previous 83 and 86 series, but still well worth a look. Available on All4

Star Trek: Discovery (PlutoTV (!))
This very nearly wasn’t part of my 2021 viewing at all, as the deal between Netflix and Viacom came to an abrupt end, causing the show to disappear from the streaming service. Never underestimate the pressure that can be exerted by a throng of angry nerds, however. One outcry later, and the show popped up on PlutoTV, sitting rather uneasily alongside reruns of Maury and Duck Dynasty.

It’s a shame about the rights-wrangling, because this was the year the show really found its feet. Season three had presented a rather pessimistic view of a shattered universe riven with conflict, with Earth leaving the Federation in a kind of Space-Brexit. Season four, so far, has eschewed that in favour of a more upbeat view, with different species coming together to tackle an existential threat.

I’m excited to see where the second half of the season goes – onto Paramount+, presumably. Available on Netflix.

Star Trek: Lower Decks (Amazon Prime)
The other big Star Trek series proved a pleasant enough diversion but it still doesn’t quite feel right to me. Getting Robert Duncan McNeill in to reprise Tom Paris is great, but then give him a silly plot involving commemorative plates? Other attempts at fan service (Shelby! Sonya Gomez!) also fell a bit flat. It’s clearly made by people who love Star Trek, which perhaps explains why references to TNG episodes are shoehorned in every 30 seconds, but still sometimes seems more like a Family Guy cutaway gag that’s gone on too long. Still, Paramount seem intent on giving us TOTAL STAR TREK ALL THE TIME, so there is sure to be more on the way. And it’s still better than Star Wars. Available on Amazon Prime Video.

Doctor Who: Flux (BBC One)
This seemed to divide fan opinion. I loved it, but I might be biased because much of the action was based right here in Liverpool, with alien spaceships hovering over Anfield, the Williamson Tunnels hosting time portals, and… JACKIE CORKHILL!

Plus there was John Bishop’s splendid opening monologue in the first episode, before he got captured by a giant talking dog.

What could be more exciting to a Scouse sci-fi geek than seeing Sontaran troops marching through Liverpool ONE? Available on BBC iPlayer.

Love, Victor (Disney+ STAR)
I really enjoyed the film Love, Simon when it came out (ha!) in 2018, despite being outside of the target demographic by about 20 years. This sequel series launched in 2020, but I only got round to watching it this year. An episodic series allows issues to be explored in more depth – and more realistically – than a teen romcom film allows. Victor’s coming out process is not as simple as Simon’s – where Simon was instantly accepted by more or less everyone, Victor has to deal with an initially unaccepting mother, homophobic priests, trouble from his basketball team-mates, and more.

Michael Cimino is genuinely appealing as Victor, and the supporting cast are all very watchable too. I particularly enjoyed Anthony Turpel’s performance as Victor’s friend Felix, whose cheery, quirky exterior hides some sad family issues. Definitely one to check out if you have Disney+, even if teen drama isn’t normally your thing. Available on Disney+.

Ragnarok (Netflix)
Thor! Huh! What is it good for? Yes, yes, Marvel Cinematic Universe, we all fancy Chris Hemsworth and Tom Hiddleston, I know. But for my money, Netflix’s take on Norse mythology was the better one. A teenager growing up in a small Norwegian town discovered that he is the reincarnation of Thor, and things just got more interesting from there.

The second season offered epic god battles, that legendary hammer (of course) and a family of millionaire industrialists who – shock horror – turn out to be evil. Great stuff! Available on Netflix.

Love & Anarchy (Netflix)
Staying in Scandinavia, we hop over to Sweden for this comedy series. It’s my most controversial choice yet, as it depicts heterosexual relationships! This actually premiered towards the end of 2020 but I only got round to watching it in January last year.

Sofie, a consultant at a publishing company, is dissatisfied with her life and marriage, until she meets Max, the company’s IT support worker. Like all IT technicians, Max is smart and irresistibly sexy, and Sofie ends up embarking on an affair with him. The two begin a game, each daring the other to perform increasingly outrageous stunts. It’s fun for a while, but soon threatens to get out of hand as life in the office is turned upside down by Sofie and Max’s hijinks.

Also… Björn Mosten. That is all. Available on Netflix.

Q-Force (Netflix)
This was the surprise one – an LGBTQ adult animated spy comedy. I wasn’t sure at all when it popped up on my Netflix’s recommended list, but by the final episode I was completely on board and roaring with laughter.

Steve Maryweather was tipped to become one of America’s best spies, but was sidelined by the agency after coming out as gay during his graduation ceremony. He ends up assigned to one of the agency’s least important locations, West Hollywood, with a team of other misfit LGBTQ people. That all changes when “Q-Force” uncover a nuclear bomb plot, which leads them to a mission that takes them around the world, including to the “EuropeVision” (ahem) song contest.

Loads of brilliant lines (although some jokes seem to require an intimate knowledge of the West Hollywood gay scene to appreciate them). The cast of characters are, at first glance, stereotypes, but as the show goes on they are fleshed out beyond that initial impression. It’s great to see one of the big streaming services putting out a show that is produced, written and performed by a mostly LGBT+ team. Available on Netflix. 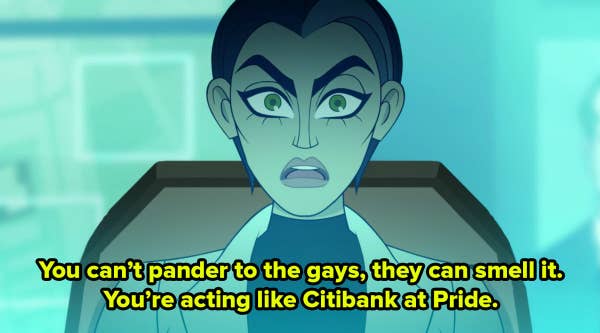 This Time with Alan Partridge

British TV these days is full of people who think that Alan Partridge was an example to follow, rather than a ghastly parody of the worst type of parochial presenter. Coogan’s most famous character is always worth watching, whatever scenario he is in, and series 2 maintained the high standard of the first instalment.

Really, I’m just mentioning it because of the amazing moment in episode 2 where Alan tries to explain the ITV franchise system to a group of prisoners in a Young Offenders’ Institute. “One day, two big guys roll up – blacked out Range Rover, bit of muscle – that’s Carlton and Granada.” One for the MHP-Chat people, there. Available on BBC iPlayer.

Those were some of my TV highlights from last year. I’m sure there’s some stuff I missed, but those are the ones that stick in the memory the most. If you’re bored and looking for some entertainment, I hope the above gives you some inspiration.