December 31st 2020 marks the end of an era. A massive upheaval, one which will affect all of our lives and change the way we look at the world.

I’m referring, of course, to the End of Life date for Adobe Flash Player. Not only is Adobe ceasing updates to the software, after nearly a quarter of a century, it will also actively prevent Flash content from being displayed in your browser.

The effect this will have on the average user is negligible. Most websites migrated away from Flash years ago in favour of newer technology. But for internet “old hands” like me, it is a significant moment, and one which stimulates the old nostalgia glands.

Flash burst onto the scene in 1996. At the time, the web was a text-only affair, primarily used for monitoring coffee pots. JavaScript existed but was mostly used for displaying annoying pop-ups and blocking users from right-clicking to copy and paste content (usually implemented on websites whose content you would never want to copy). 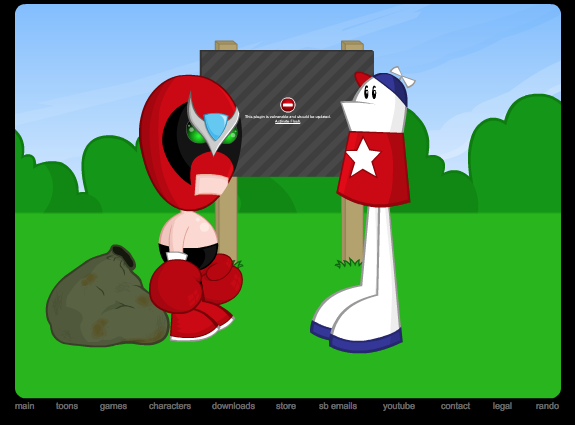 Flash offered something new. Graphics! Animations! Sounds! Music! No more grey websites with the Netscape Navigator default fonts, you could now create rich multimedia experiences. Despite the high costs of the Flash authoring software, many web designers took it up and Flash became commonplace on the web. Many websites required Flash and wouldn’t work at all, or offered a severely degraded experience, without it.

This latter feature was annoying for newbies to the world wide web, who were buying computers and going online for the first time. Expecting their computer to be ready to surf from the outset, the chances were that the first website you visited would prompt you to download Flash. And RealPlayer. And Java. But not Microsoft Silverlight, because no-one ever used that.

The reliance on Flash caused issues for anyone who dared to use a non-standard computer platform. My main computer until 2002 was an Acorn RiscPC, and the lack of Flash support locked me out of a significant chunk of the web. The nascent Linux platform had similar issues, although Adobe eventually released a plugin.

Flash was also a nightmare for accessibility — Flash content was often designed with little thought for disabled users, causing problems for the visually-impaired, or those who were unable to use a mouse.

Despite these shortcomings, Flash continued to dominate for much of the noughties. Far too many hours were spent playing Flash mini-games or watching web cartoons like Homestar Runner. The original version of YouTube even used Flash video in its player. Flash was so ubiquitous that, for a time, it was built into Google Chrome rather than requiring a separate plugin.

Flash also gained a reputation for security issues, some so severe that they could allow a hacker to take complete control of a user’s PC. With Flash installed on so many computers and used on so many websites, any potential security holes could be widely exploited. Adobe released security updates on a monthly basis, but users were not always diligent at installing them.

The turning point perhaps came with the release of the Apple iPhone in 2007. This contained the Safari web browser and Apple boasted that it offered a fully-featured browsing experience. True, there were some compromises to fit on a small screen, but for the most part it was every bit as capable as the desktop version, with one exception: no support for plugins such as Flash.

Many commentators were sceptical that a browser without Flash could be successful, but as the iPhone soared in popularity, that scepticism changed to outrage. Surely this was a huge corporation abusing its dominant position in the industry to effectively kill off another company’s software?

Steve Jobs responded to the criticism with his famous Thoughts on Flash article, outlining Apple’s reasoning. It seems to have been scrubbed from Apple’s website now, but it is available via the Wayback Machine.

Apple has many proprietary products too. Though the operating system for the iPhone, iPod and iPad is proprietary, we strongly believe that all standards pertaining to the web should be open. Rather than use Flash, Apple has adopted HTML5, CSS and JavaScript – all open standards.

Whether you agree with Jobs’s reasoning or not, the lack of Flash on iPhone had a lasting effect. Web site owners, not wanting to turn away traffic from the increasing number of mobile users, changed their websites to use newer technologies such as HTML5. Adobe eventually threw in the towel and scaled back its work on Flash in favour of other software such as Adobe AIR, which allows the building of native iPhone applications.

Ten years later and the vast majority of the web is now built on open standards. You can now slow down your computer and make web pages unusable without having to download any plugins whatsoever.

Flash will stop working entirely on 12 January 2021. Luckily for all of us, the Internet Archive has been busy archiving Flash content, and has even developed a Flash emulator. This will run in most modern browsers, providing a tantalising glimpse of the lost world of the internet as it looked in the time of Windows XP and the 11 O’Clock Show.

Go on, go and have a look at the Strong Bad Emails one last time. You know you want to.