Last year (at least six or seven blog posts ago) a massive timetable shakeup was announced on train services across the north of England, promising faster journeys, new connection opportunities and an all-round better experience.

To say the changeover didn’t go smoothly would be an understatement.

Passengers endured weeks of disruption before an emergency timetable was introduced, drastically thinning out the service on some lines. It was months before things got back to some semblance of normality, and the lasting damage to the railway’s reputation (and Northern in particular) will take some time to recover.

Now, one year later, the train companies are gearing up to try again, with a new timetable due to start on Sunday 19th May. It’s not the “big bang” of May 2018, but perhaps that’s just as well.

Sadly, for passengers travelling out of Lime Street, a lot of the promised improvements have been deferred yet again. But there are some big changes going ahead, so let’s look at what’s happening. As always, I focus on the Liverpool area, because… that’s where I live, and it’s boss. 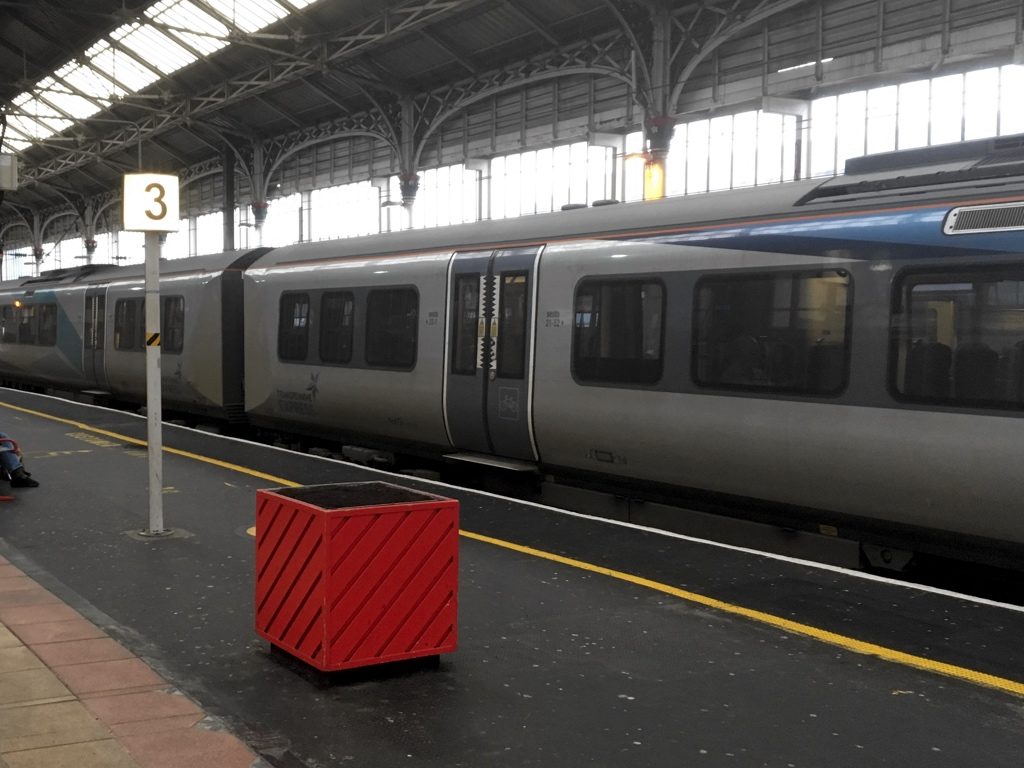 This was supposed to be the moment that Liverpool got direct services to Scotland, with three trains per day to Glasgow Central via Lancaster, and one train a day to Edinburgh via Newcastle. The schedules for these services even (briefly) appeared in online timetable sites such as Realtime Trains.

However, TPE are suffering from a chronic rolling stock shortage. The new Nova 3 trains should have been in service by now, freeing up trains to use elsewhere, but reportedly they have suffered from various technical problems. Their delayed entry into service means there are no spare trains to begin any new services – indeed, there are barely enough trains to run the current timetable.

So the Scottish route, originally due to start in December 2018, has been postponed yet again. Online rumours suggest it may start in September, but I suspect Liverpudlians heading north of the border will be shuttling to Wigan North Western until December.

The good news is that the first Nova 3 was finally cleared for passenger service in April and, following staff training, will start to roll out over the summer on the Liverpool-Scarborough route, providing much needed extra capacity. 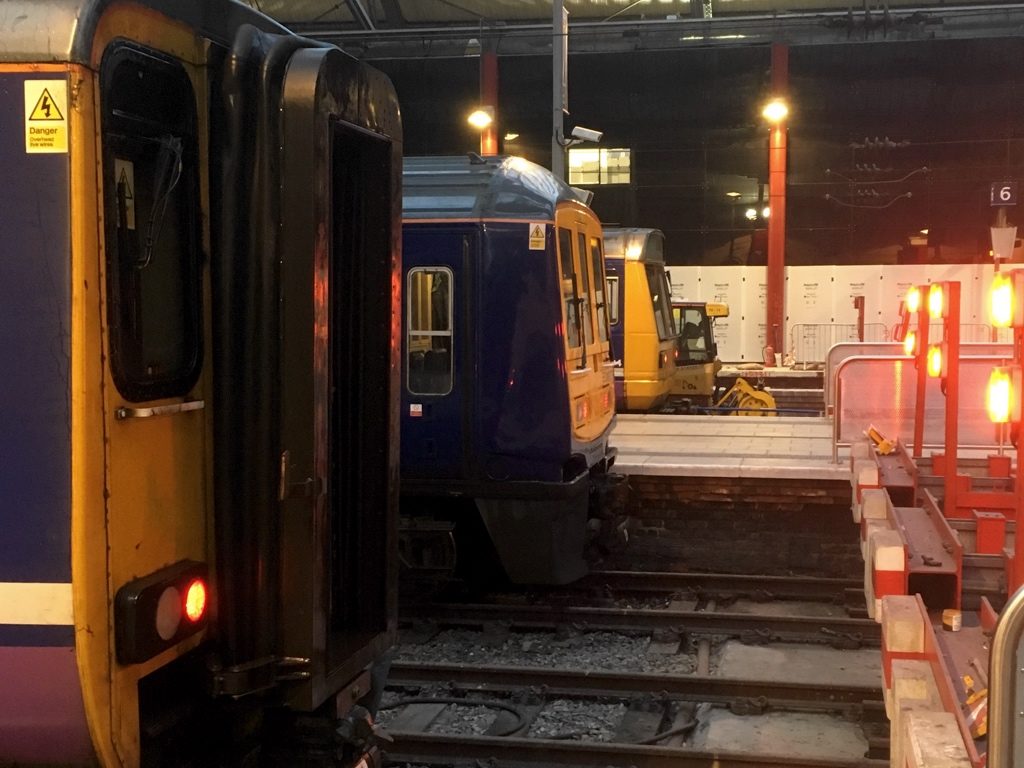 Having borne the brunt of last year’s disruption, and still suffering from the damage to the business caused by the bitter guard’s strikes, it’s perhaps unsurprising that Northern are not making too many big changes.

One new service (again delayed from last year) is a direct link from Chester to Leeds via Manchester Victoria. This is one of the routes that eventually will operate under the Northern Connect brand, supposedly offering a higher quality service.

Bizarrely, there is no single timetable leaflet which shows this new service – booklet 36 shows the Leeds-Manchester section, with plenty of footnotes saying the trains continue to/from Chester, while booklet 15 (“Liverpool to Manchester Airport”) shows the Chester-Manchester section.

Two trains per day (in the morning and evening peak) are diverted to Ellesmere Port. The morning service from the Port arrives at Manchester at 0818, while the return journey departs at 1707, times which are probably not quite right for 9-to-5 commuters, but slightly more useful than previous services on this little-used line.

Although I said I would focus on the Liverpool area, I must say a warm welcome back to Gainsborough Central, which gains a weekday train service for the first time in many years, as an hourly service to Sheffield is introduced.

Back to Liverpool, and one slightly annoying change is that the 0614 service to Manchester Airport becomes a 0613 service to Wilmslow, meaning there is a gap in direct fast trains to the airport between 0337 and 0816 on weekday mornings. Beware if you have to catch a morning flight!

Also, Realtime Trains is showing non-passenger (for now) stops at Warrington West, which is due to open some time this year.

Anyone who has trundled past Allerton Depot recently can’t have failed to notice the lines of new trains stabled outside, which still haven’t entered passenger service. These include brand new Class 195 diesel trains, and the “bi-mode” Class 769, converted from Class 319 trains, which can take power from either overhead electric wires or an on-board diesel generator. Again, there have been problems getting these trains tested, but they should enter service very soon.

Except they’re not completely new: LNWR already run Liverpool-Birmingham and Birmingham-London trains, and they have joined the two services together to create this new service. Long-distance services like this can be more susceptible to disruption, so fingers crossed there won’t be too many incidents where passengers at Winsford are inconvenienced by a problem at Harrow & Wealdstone.

Going via Birmingham means you shouldn’t expect a speedy journey. London Northwestern are a commuter operation first and foremost, and their trains meander to London on the slow lines, stopping at seemingly every town in the Home Counties before reaching Euston. Journey time is around 4 hours, almost twice as long as the Virgin Trains service. If you don’t believe me, check out the image to the right (or above, depending on how the text layout works) which shows the typical stopping pattern. That’s a lot of stations. Finally, the direct service to Leighton Buzzard that Liverpool has been crying out for!

To put it another way: you could board the 0610 from Liverpool Lime Street and arrive at Euston at 1024, having been overtaken by the 0644 Virgin train which arrives nearly an hour earlier.

Counterintuitively, you can speed things up by changing at Crewe onto a different, faster LNWR service, which gets the journey time down to under three and a half hours.

Where this new service will compete is on price. An Off Peak Return from Liverpool to London is just £46.70 if you’re happy to restrict yourself to LNWR trains only, compared to £95.60 for the equivalent ticket valid on all operators. Advance tickets start at just £12 one way.

A word of warning if you take this option: LNWR trains are basic – it’s mainly a commuter operation, remember? The Class 350s are good trains, but there is no onboard catering, no seat reservations and no electrical sockets (except in first class). If you’re really unlucky you might get one of the “high-density” 350/2 trains which have 2+3 seating and no tables. You pays your money…

It will be interesting to see if this new service attracts new passengers. Four hours sounds like a long time, but it’s still a lot quicker than the Megabus, and potentially only a little bit dearer.

Oh, and Acton Bridge station gets a Sunday service. Which is nice. 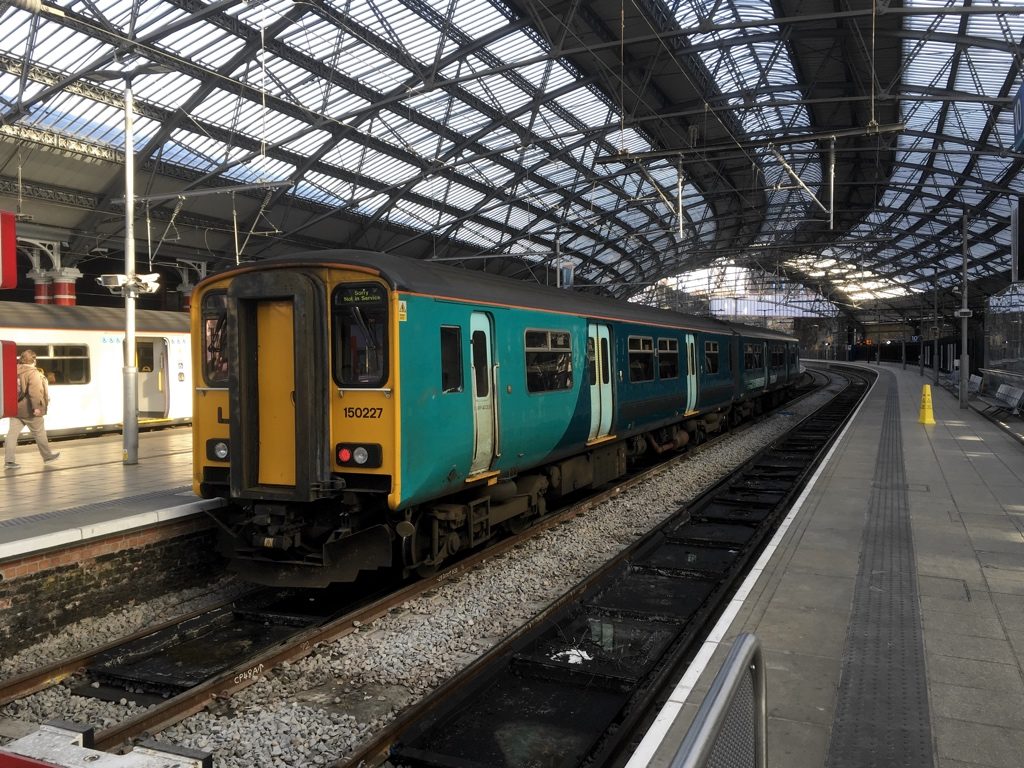 This is the big one – a new service. Not one cobbled together by joining up existing services, but an actual new route, over a newly-upgraded bit of track, by a new operator to Liverpool.

The Halton Curve, which connects the Chester-Warrington line to the Liverpool-Crewe line, last saw a regular passenger service in 1975. Since then it has been gradually run down to almost nothing. In later years, the line could only be used in one direction (Zayn was my favourite) and the service was reduced to a single train which ran from Chester-Runcorn on summer Saturdays only. 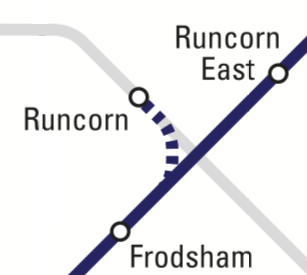 To make that dotted line solid cost £18 million, but the curve has now been upgraded to allow for full bidirectional travel once more. 19th May sees the introduction of a new hourly(ish) Liverpool-Chester service. Services were supposed to start in December 2018 but… you guessed it, Transport for Wales were short of rolling stock. In fact, they are still short of rolling stock, but the service is starting anyway.

Now, I know what you’re going to say: “There’s already a Liverpool to Chester train service!” WELL I’M JUST ABOUT TO EXPLAIN THE DIFFERENCE SO SHUT UP AND LISTEN.

This new service will link Liverpool and Chester via Runcorn, complementing the existing Merseyrail service via Birkenhead. End-to-end journey time from Liverpool to Chester is about the same as Merseyrail, but other journeys see significant improvements: Liverpool South Parkway to Chester currently takes about 1¼ hours with a change at Liverpool Central, while the new service will be about 40 minutes direct. This makes Liverpool Airport much more accessible by rail from the Chester/North Wales direction. Frodsham and Helsby get direct links to Liverpool for the first time in decades – a great way to avoid the Mersey Gateway tolls.

Now, I know what you’re going to say: “Why is Transport for Wales operating this new route that is entirely in England?” WELL I’M JUST ABOUT TO TELL YOU WHY, COME ON STOP INTERRUPTING.

A couple of trains per day do venture into Wales, continuing to Wrexham General. However, the current service is effectively a placeholder, a temporary operation until the expansion of TfW’s fleet allows new routes to be introduced. By 2022, Liverpool will have direct services to Llandudno, Shrewsbury and Cardiff, all running via the Halton Curve. 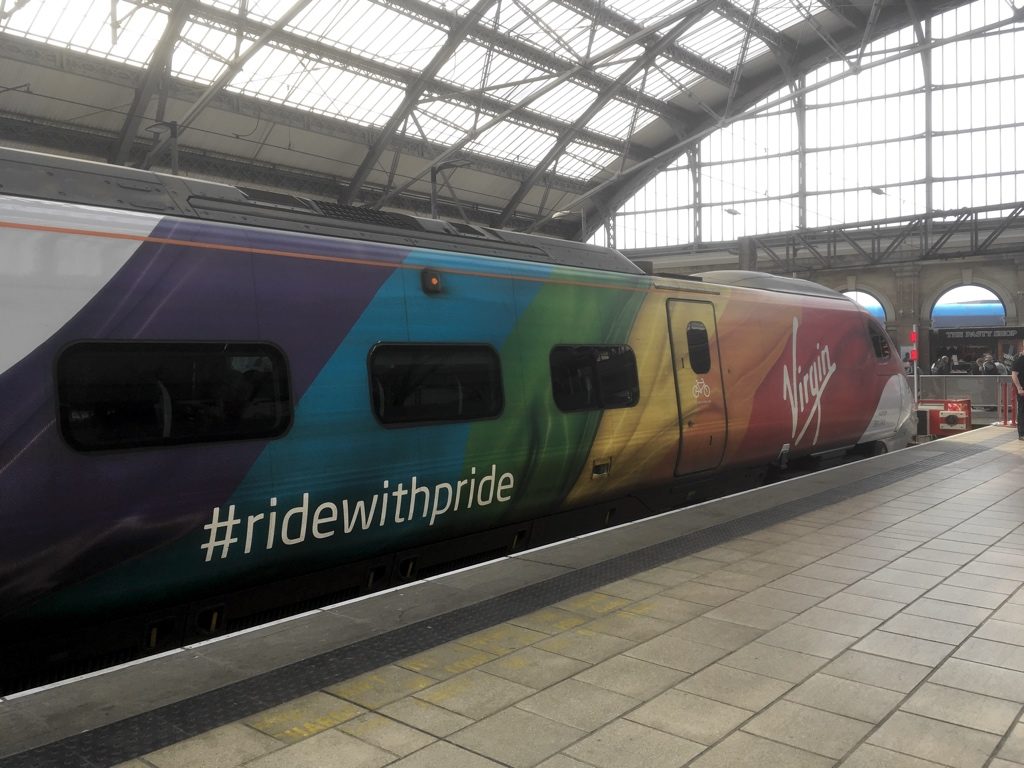 No big changes at all that I can see. A tip o’ the hat to eagle-eyed posters at RailUK Forums, who back in February spotted an application by Virgin to run extra trains to/from Liverpool Lime Street, starting in June 2019. However the application was pretty rapidly slapped down by Network Rail, and the proposed services have been put on hold.

Considering that the Virgin consortium have just lost the chance to rebid for the West Coast franchise, and their big idea to reduce overcrowding is not to run more or longer trains, but to simply ban standing passengers, I’m not holding out much hope for the immediate future.

That’s all the changes I can see for trains to/from Liverpool. If you read this far, especially after that terrible pun at the beginning, thanks. Have I missed anything? Any exciting changes that I should have mentioned? Leave a comment below.