At the end of last month I headed to Hamburg for a second trip to Germany’s second city. Once again, it was at the invitation of my friend Boris, who lived in Hamburg for quite some time and knows the city well.

(I would link to the blog posts about my previous trip in 2016, but my old site is down after an unfortunate hacking attack – hopefully it will be back soon)

The good people of Hamburg were so happy to see us when we arrived on Friday, they organised a giant fireworks display to celebrate!

This is not true, of course. This fireworks display was part of the Hamburg DOM, a festival and funfair held in the St Pauli area three times a year. 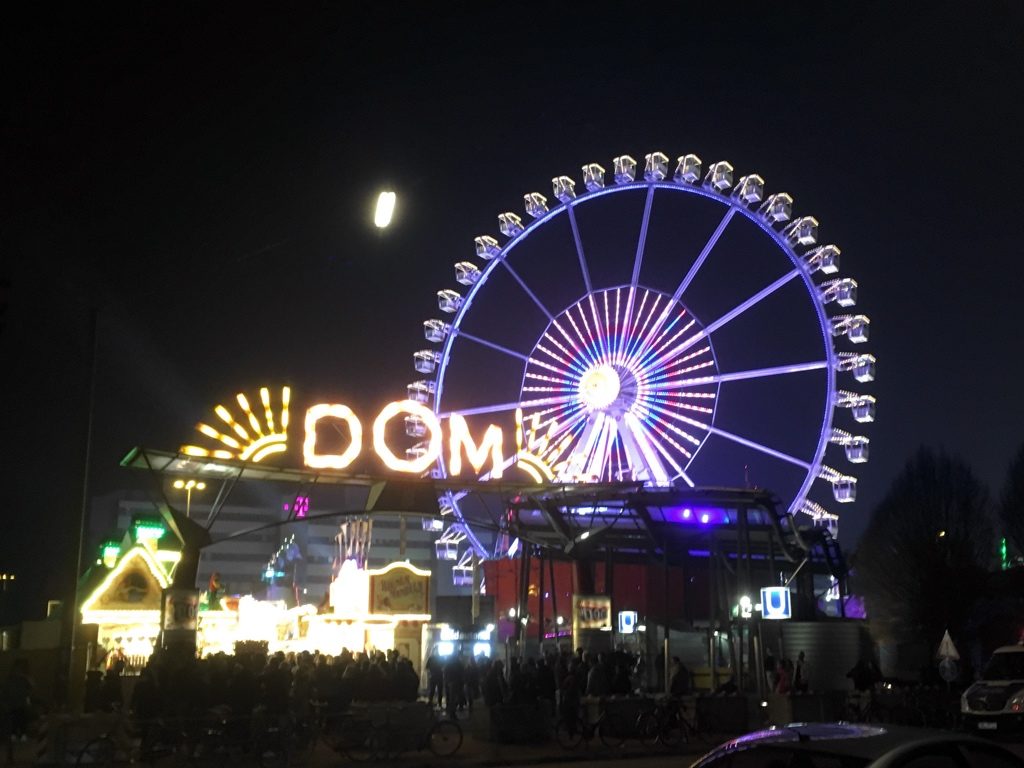 I was surrounded by rides, neon lights and food stands offering German delicacies. No time to sample them, however – neon lights of a different kind were calling us, and we headed to the Reeperbahn for the first time that weekend.

Next morning, not feeling too worse for wear, we headed out for a morning of high culture at the Hamburg History Museum. Spread over three floors, the city’s storied history is explored in great detail.

I think it’s fair to say we didn’t do the museum justice. Hamburg was founded 1,200 years ago – that’s a LOT of history to squeeze into three hours, and we barely scratched the surface of what the museum had to offer.

The permanent exhibit depicting Jewish life in Hamburg was particularly poignant, complete with a reconstruction of one of the many synagogues destroyed by the Nazis. 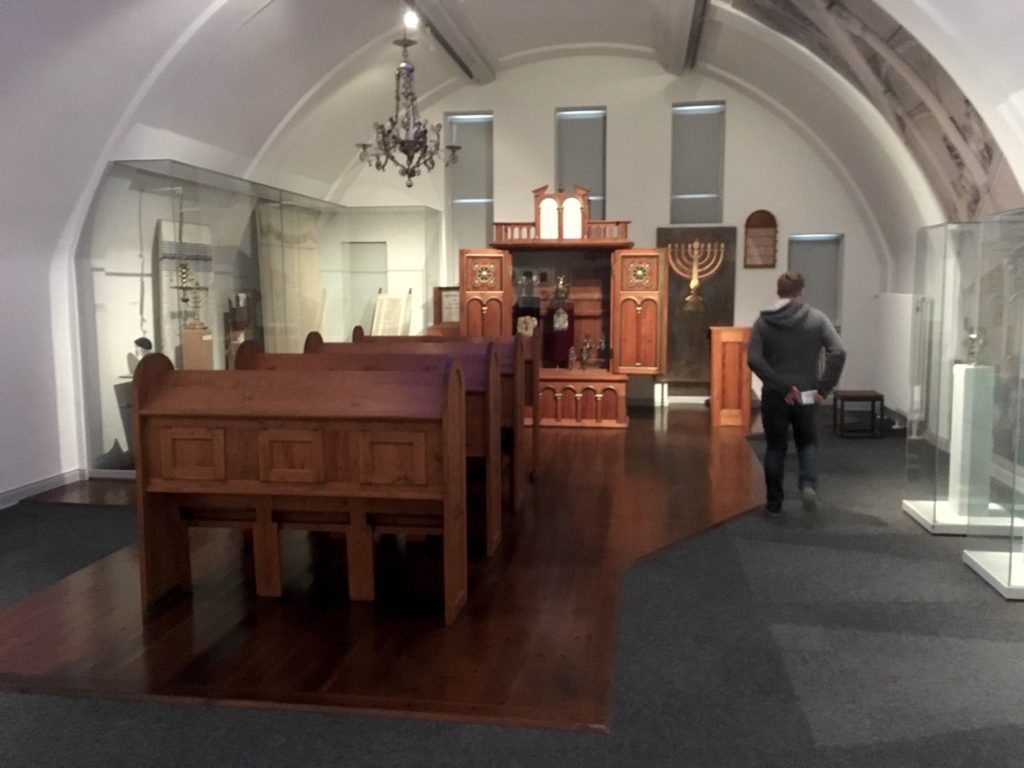 Elsewhere, I was very amused by this exhibit, purporting to depict a “single man’s life in Hamburg in the late 20th century”. Change the gender of the cardboard cut-out and it could almost be my bedroom now (ahem). 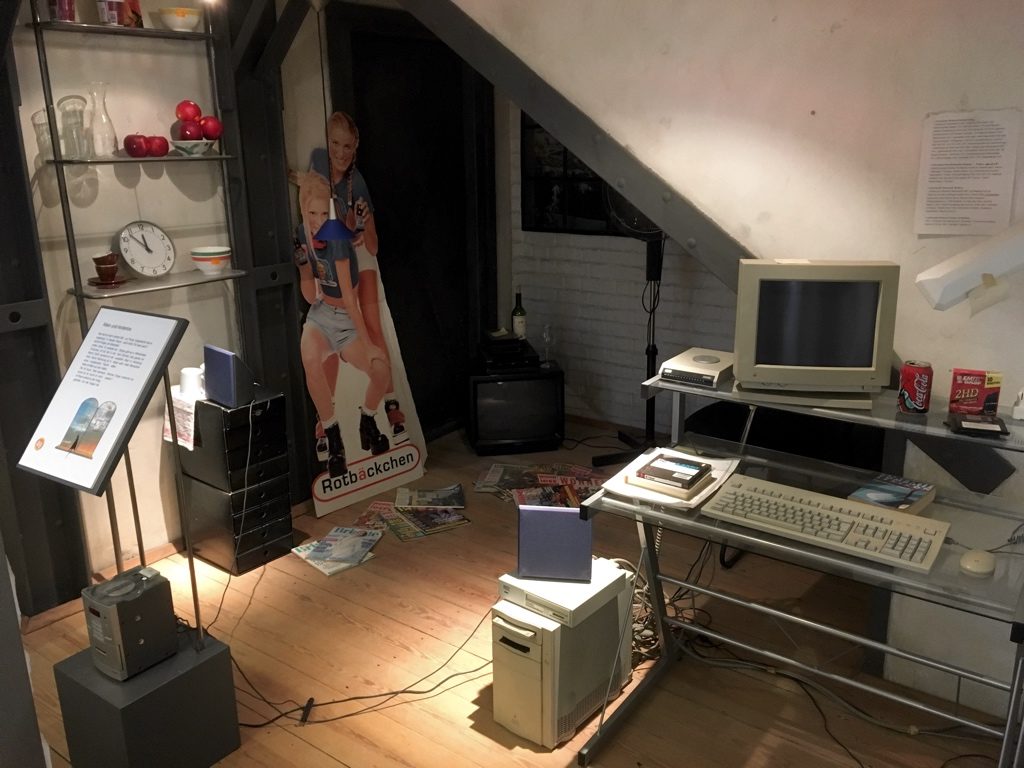 And then there was this statue, which is definitely a mood. 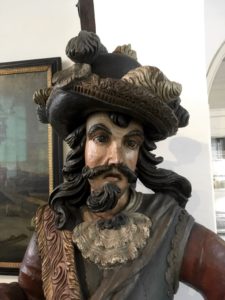 The most exciting thing (for me, anyway) – a model railway! It is rare among models for being built in Gauge 1, the largest of all model railway scales.

Sadly it did not seem to be in operation when we were there, but I wasn’t too worried, as I knew this wouldn’t be my only exposure to model railways this weekend.

As you might expect from a port city, Hamburg has an excellent little network of ferry boats, linking various points on both sides of the River Elbe to the Landungsbrücken, where connections to the U- and S-Bahn network are available. And because it’s Germany, the ferry service is fully integrated into the public transport network and is included in the cost of your HVV-Tageskarte.

The ferry service runs frequently, which is just as well, because there was a big crowd of people waiting to board. Indeed, just as our party was about to get on, the deck hand stepped into our path, indicating there was no more room. We had to wait for the next one.

It was cloudy and grey when we set sail along the River Elbe. Docks and warehouses lined the banks of the river. It was a reminder that Hamburg, above all else, is still a very important port, with all the grime and grit that comes with it.

We were sitting on the upper, open deck of the ferry. Normally I would find this invigorating, but it was a chilly, windy day and I started to shiver. It was good to alight at Neumühlen and enjoy wrapping my mouth around some tasty sausage from a kiosk on the landing stage. 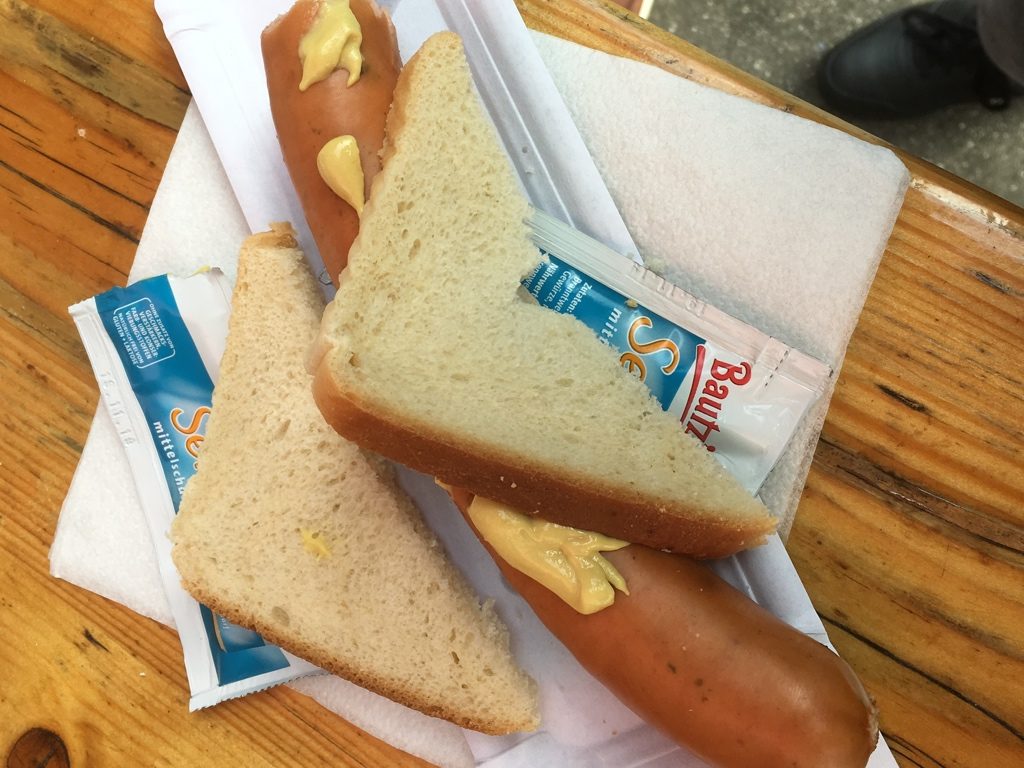 “World’s largest model railway” may not be the most exciting-sounding place (unless you’re me) but this attraction, in Hamburg’s historic Speicherstadt district, really is a must-see and attracts thousands of visitors daily, so many that admission slots have to be pre-booked.

I had visited the Wunderland on my previous trip to Hamburg, but a repeat visit was definitely needed, not only because a new area had been opened since last time, but also because I had the opportunity to go on a behind the scenes tour.

While I was waiting for the tour to begin, I took the opportunity to look around and remind myself what an amazing feat of model-building this is. Representations of Germany, Austria, USA, Switzerland, Scandinavia and Italy, all beautifully constructed with meticulous detail. Every 15 minutes, “night” falls and the landscapes are illuminated with thousands of tiny lights, creating a magical wonderland.

The tour itself was fun. It was restricted to just six people, plus the guide, because we had to go into some very tight spaces, ducking under baseboards, and going through hidden hatches. We surprised the “normal” visitors at several points by popping up in unexpected places behind the layout.

The guide revealed some of the amazing details of the operation. There are literally hundreds of trains, which are regularly swapped around, parked on hidden sidings while other trains take their place, lest the continuous operation for up to 18 hours per day overheats them. Several cleaning trains circumnavigate the layout non-stop, hoovering up dust and cleaning the rails. 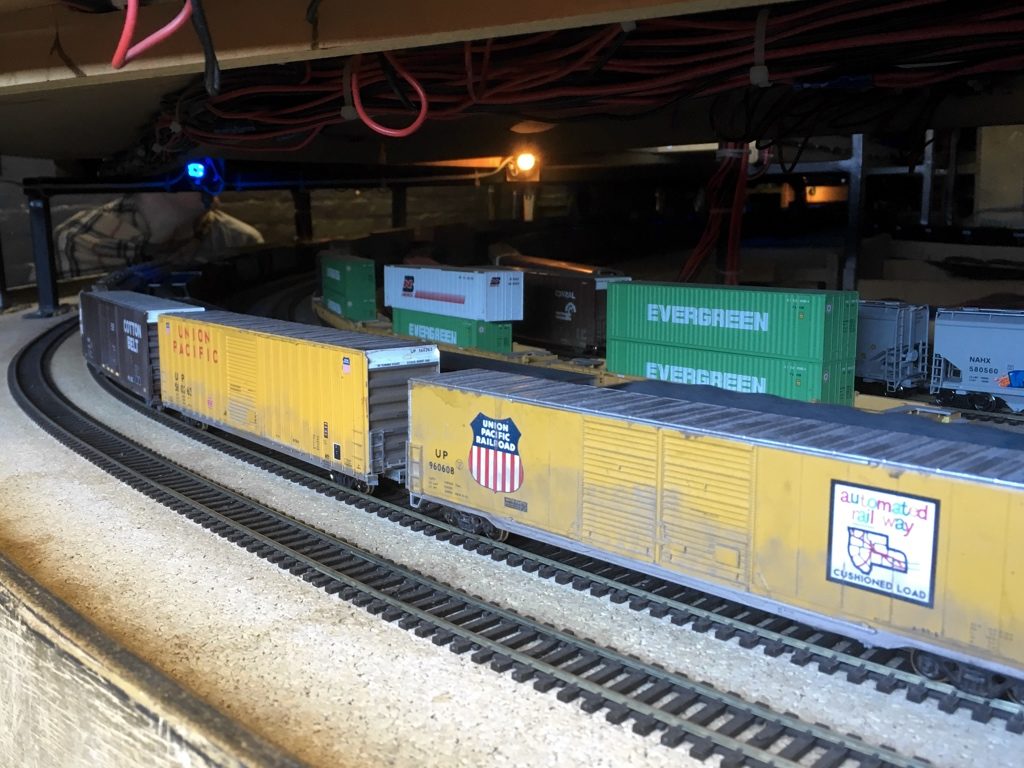 The model cars are monitored by computer – if their speed drops below a certain level, they are automatically sent to a charging point to recharge their batteries. 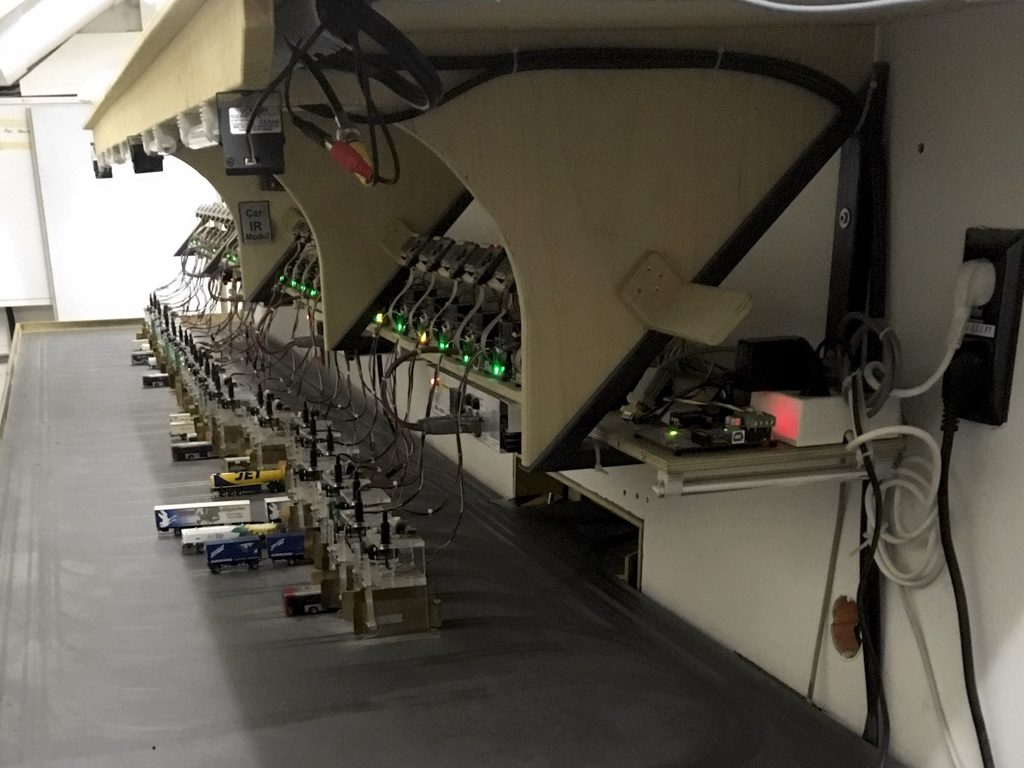 We also got to see behind the scenes of Knuffingen Airport, where model planes “take off”, then are taken by conveyor belt back to the other end of the model so that they can “land”. 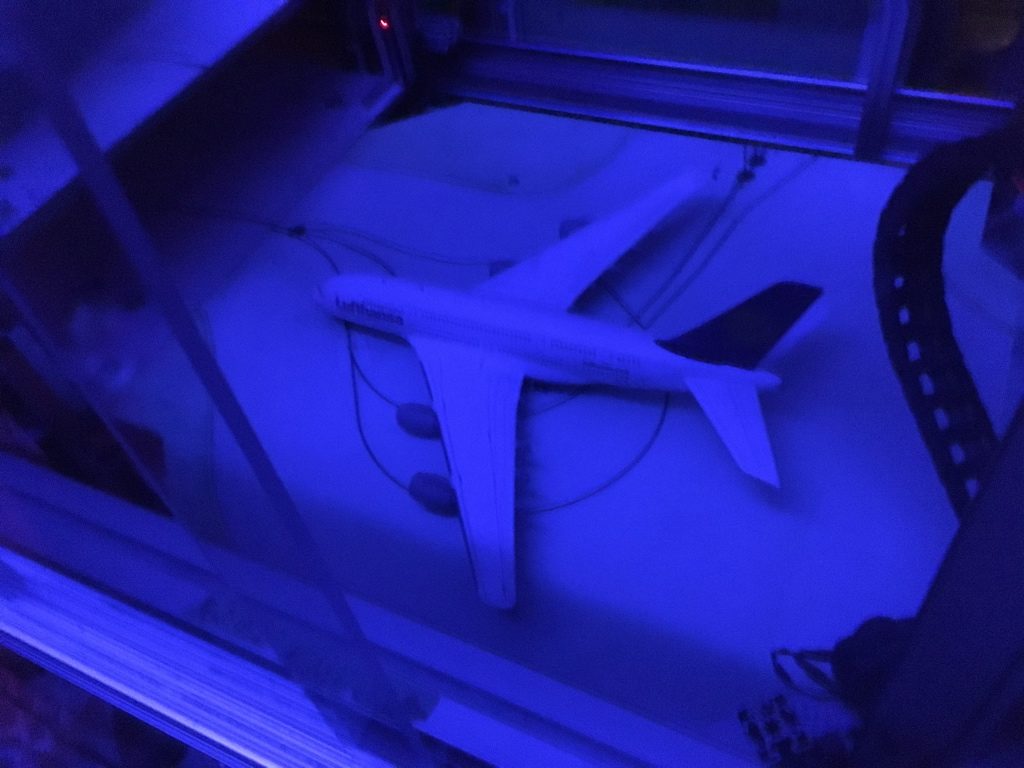 It is all controlled from this central area, with computerised track diagrams and CCTV monitoring that wouldn’t look out of place in a real railway signalling centre. 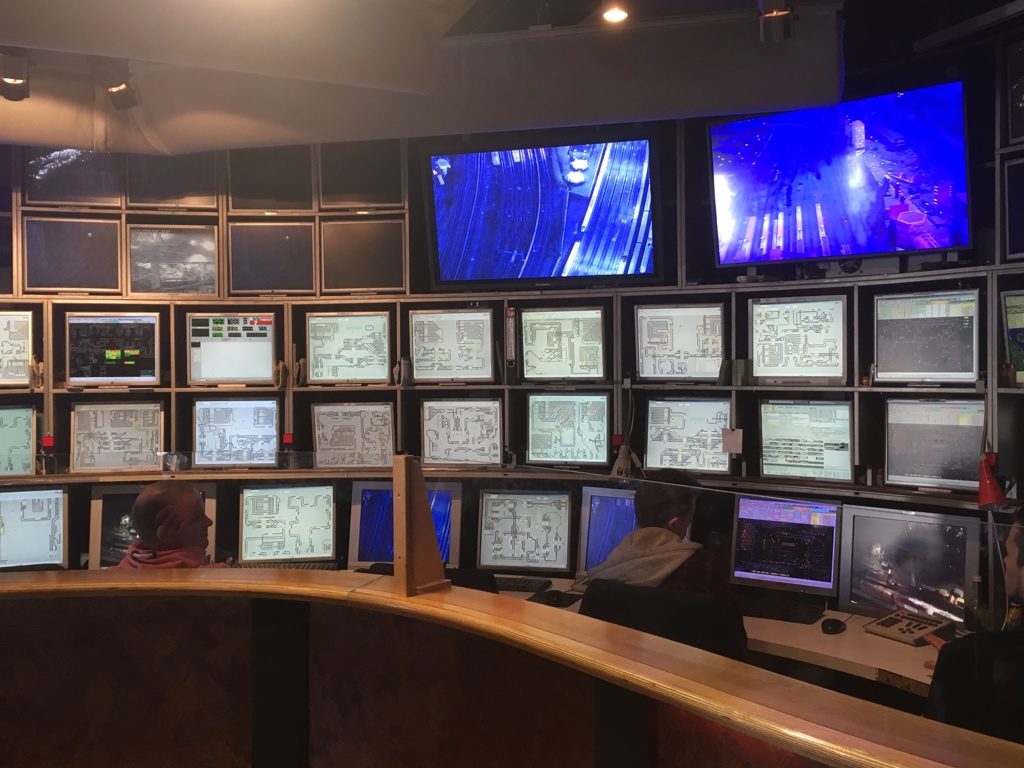 Since my last visit, a new area had opened, representing Italy, complete with a scale model of Mount Vesuvius, made from real lava rock, which “erupts” every 15 minutes. 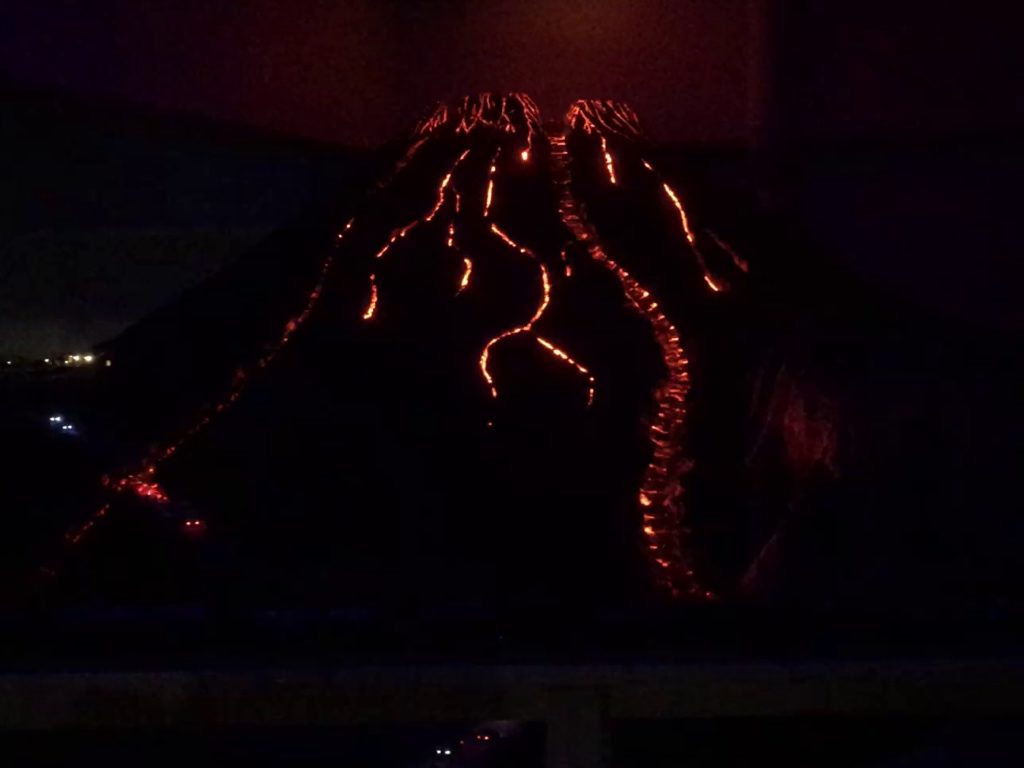 Although Miniatur Wunderland is a family attraction, there are a few “grown up” tableaus on show, if you know where to look… 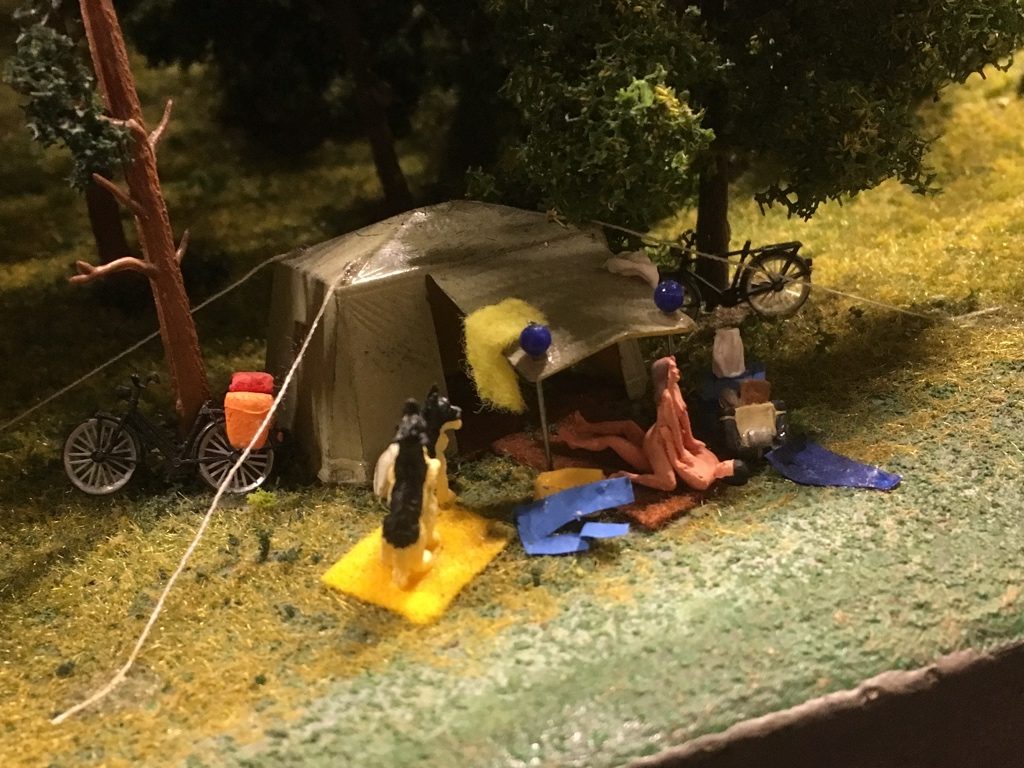 Any plans for the rest of Sunday soon evaporated, as I ended up spending most of the day in Wunderland. Highly recommended.

As crazy as it ever is. At Beatles Platz, the outlines of the Fab Four watch over the hordes of stag parties stumbling down Grosse Freiheit in search of debauchery. 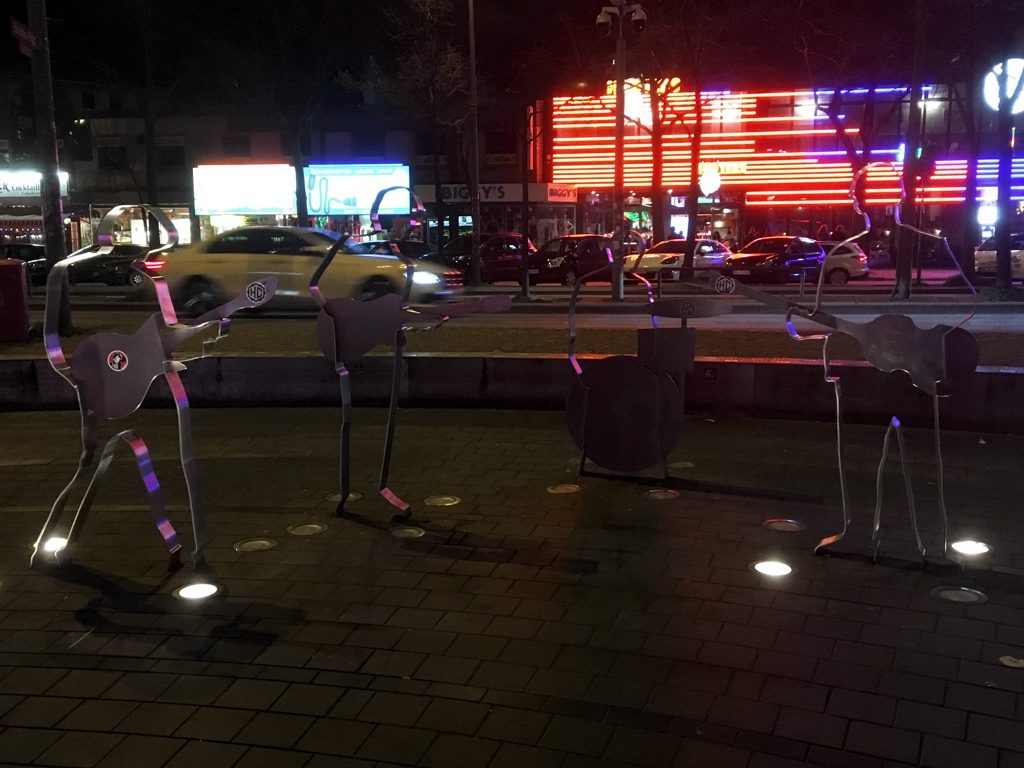 Abandoning the famous Grosse Freiheit club because they wanted thirty Euros to get in, we instead went to another bar, Shooters, where loud music and drinks were on offer. Later on, we decamped to Boris’s favourite gay bar, WunderBar.

This could definitely be filed under “I wouldn’t normally do this sort of thing” but in the company of friends, I found myself starting to relax. Check the CCTV footage of those bars and there may even be footage of me dancing.

I’m not sure this is an authorised use of the TfL roundel, mind you. 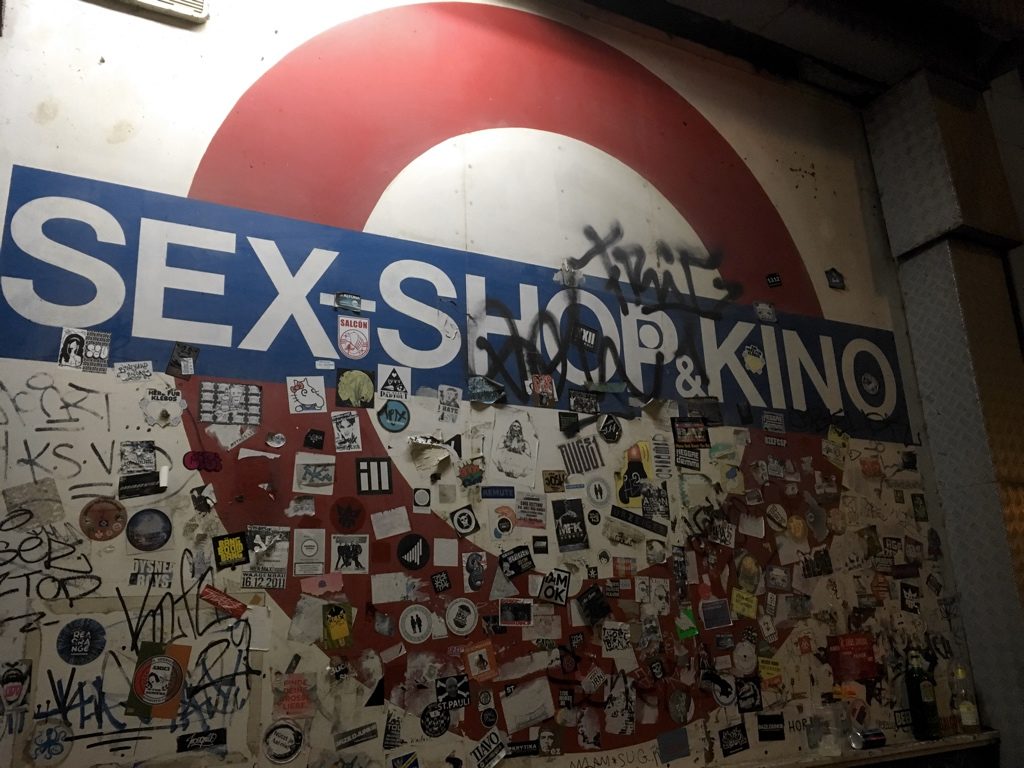 As well as the aforementioned sausage, I enjoyed some excellent food in the city. Saturday evening was spent at Hatari Pfälzer Stube, where the food was great but the service… less so. I won’t go into detail, suffice to say it was disconcerting when some of our party ordered starters and then the main course arrived first.

That said, my schnitzel, when it finally turned up, was gorgeous. 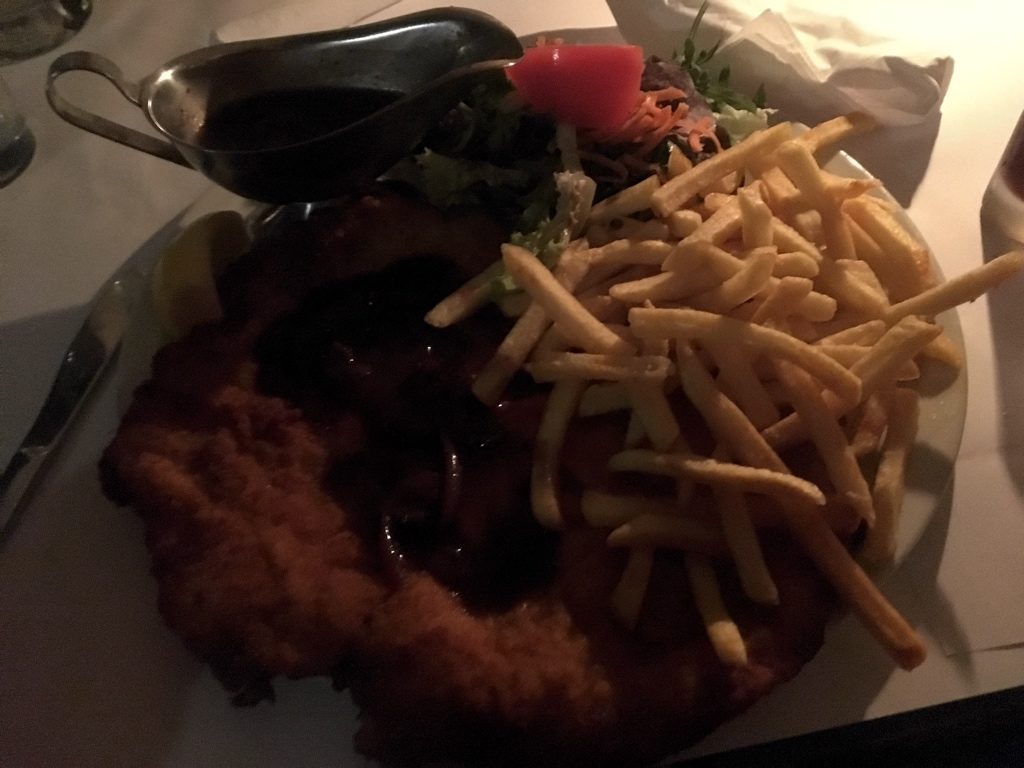 On Sunday night I found myself alone in the city (Boris et al returned home Sunday, but it worked out cheaper for me to stay an extra night and get a flight on Monday morning). I decided to go for some simple fast food. I could have gone for McDonalds or KFC, but when in Hamburg, you need to eat at Jim Block.

It’s burger and chips, but served on a proper plate with a proper glass to hold the drink. I felt like I was in a slightly posher Wimpy. And I was proud of myself for managing to make myself understood in German to the server. 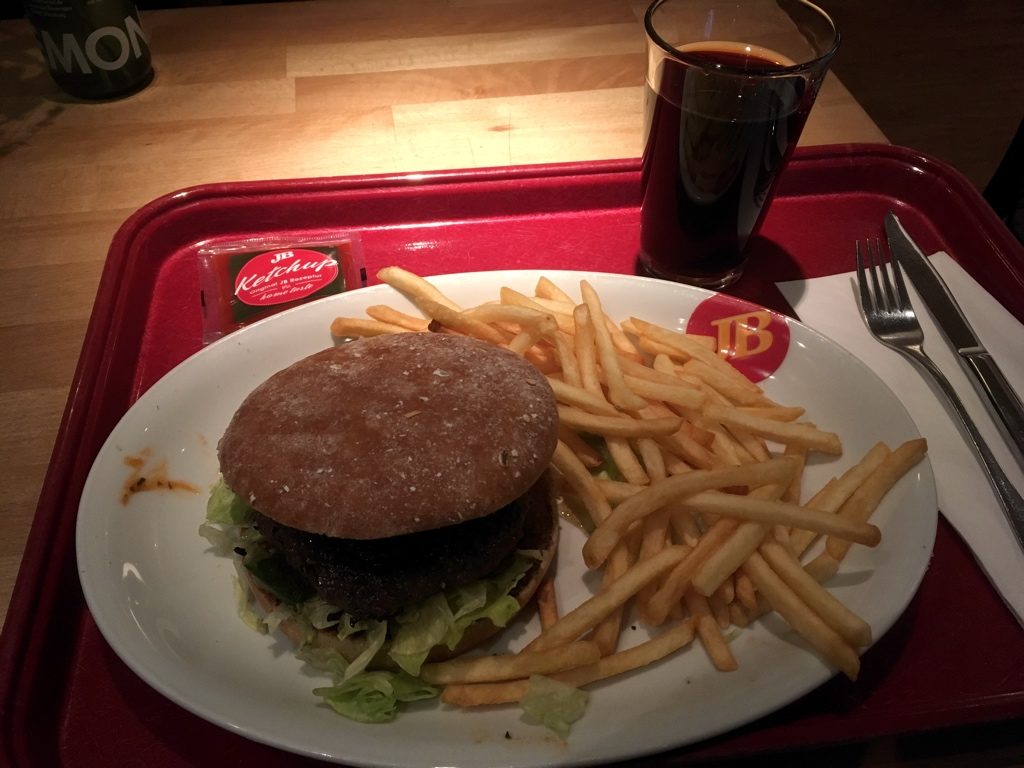 And of course, I took the opportunity at the airport to stockpile some lovely Mezzo Mix before returning home. Orange-flavoured Cola, sweeter than an entire litter of kittens. Why this drink is only available in Germany is a mystery me. 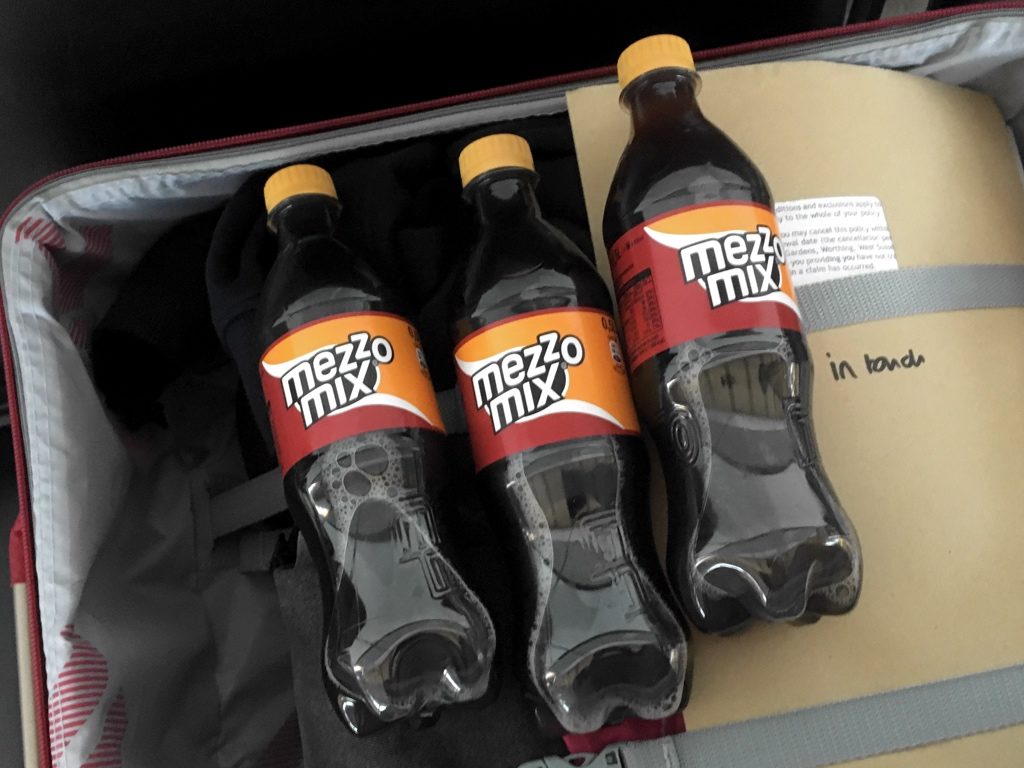 Hamburg’s public transport system, overseen by the HVV, is excellent, and cheap. An all-day off peak ticket will set you back just €6.50, and covers bus, train, U-Bahn and ferries. I have to say it, though: The network map is ugly as sin – all jagged lines and sharp corners. 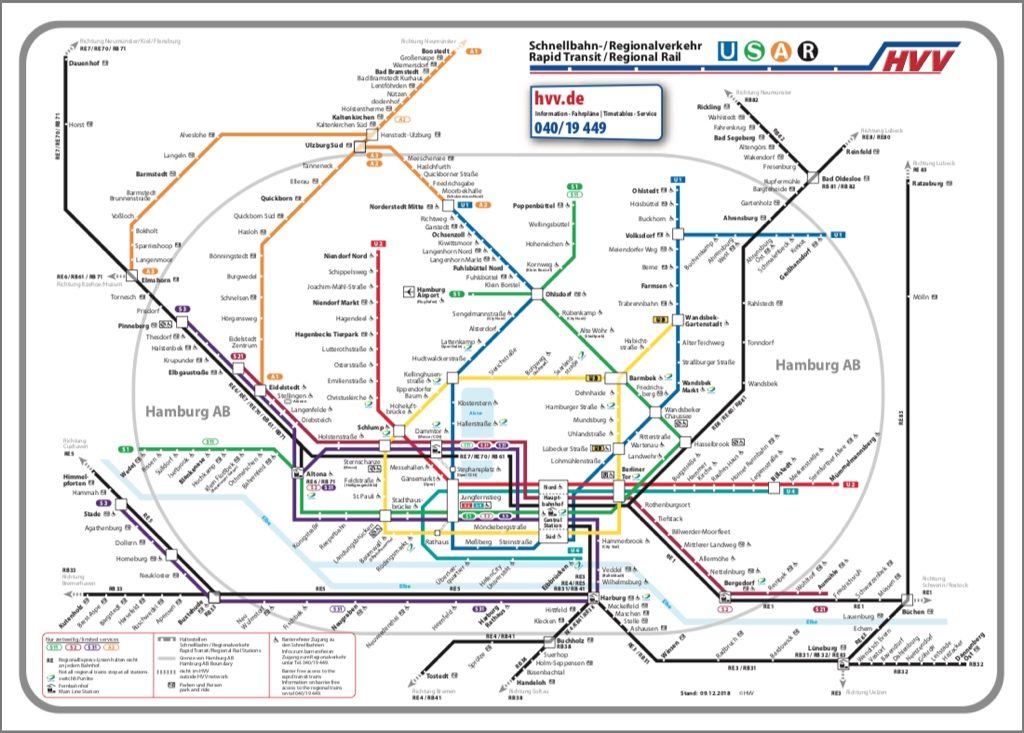 On the other hand, the elevated Hochbahn tracks near Landungsbrücken have a pleasing symmetry when viewed from beneath. 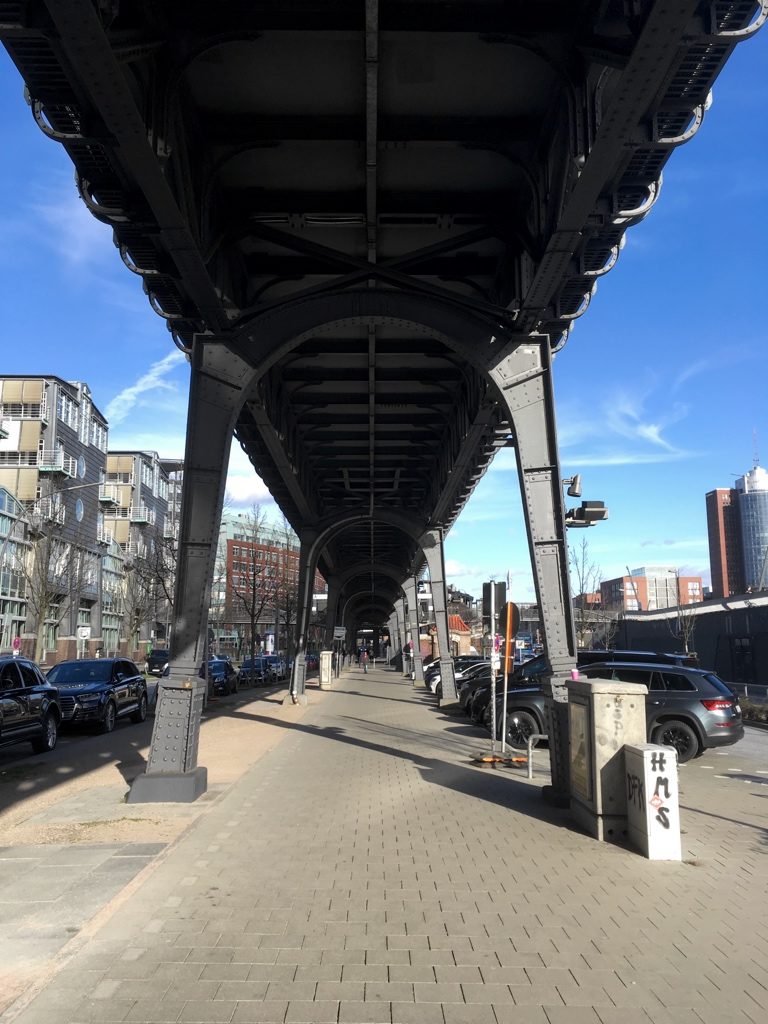 So, in conclusion: Hamburg is a great place to spend a weekend. The only downside is that it isn’t Berlin.

(Also, please can someone introduce direct flights from Liverpool to Hamburg? Thanks)