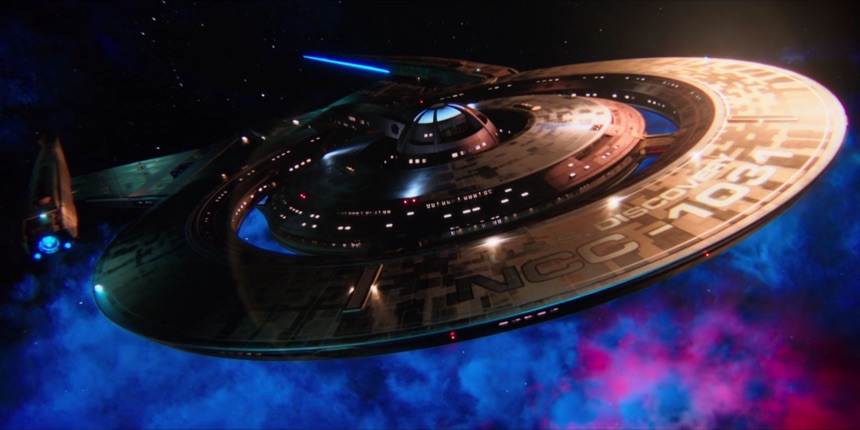 Trek, and The Next Generation in particular, is my Doctor Who. I first discovered TNG in the early 90s, when Sky One stripped the show across the schedules five nights a week. At the end of a shit day in school, I could plonk myself on the couch at home at 5pm and escape for an hour into a fantasy world of Klingons, Borg and men in miniskirts.

Crucially, it was a universe where facts and reason won out over bluster and brute force. The Enterprise was a ship of peace, where Picard and chums talked out their problems over a conference room table. See the episode “The Ensigns of Command”, where Picard resolves a dispute with a hostile alien race not by blasting them with phasers, but by finding a loophole in a treaty.

I really, REALLY wanted to like Discovery. However, my hopes were not too high following the “reboot” film series. I enjoyed 2009’s Star Trek as much as I do any big action blockbuster, but secretly hoped that the sequels would find room for some more thoughtful moments amidst the shooting and shouting. The trailers for the subsequent films did not excite me. I still haven’t got around to watching either Into Darkness or Beyond.

I was reassured by the presence of some names from “old Trek” in the credits of the new series. Nicholas Meyer, director of Star Trek II and VI, is a writer. Joe Menosky, writer of the weirdest TNG episode, is also on board. Bringing former Voyager writer and co-producer Bryan Fuller on board as showrunner could have had excellent results, had he not been forced to step down due to other commitments. On the plus side, this gave him more time to devote to his other show American Gods, ensuring that gay sex scenes are 100% realistic.

We are now nine episodes into Discovery. Is that enough to form an opinion of the series? Early episodes of any series are often untypical of the show as a whole – don’t judge The Next Generation based on the first half of season one! However, the show has broadcast a “finale” of sorts before a mid-season break, so it seems appropriate to take stock and look at what we’ve seen so far.

(As an aside, is it odd for a show being broadcast on a video on demand service to take a mid-season break? Splitting up the run sort of makes sense on US network television, because channels hold their best shows back for “sweeps” months, but on VOD? What is stopping someone from cancelling their sub for three months until the show resumes?)

So… what are my thoughts?

I hate, hate, HATE the redesigned Klingons. There was no need to mess with them for the reboot films and even less reason to do so for the new series. So there. 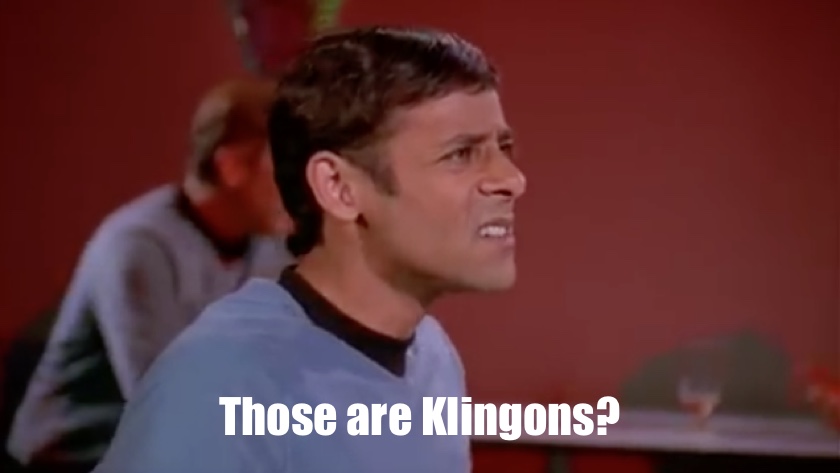 Another problem with the Klingons is that there are long scenes where they talk to each other in Klingonese, with English subtitles. It’s more realistic – of course they’re going to speak Klingon to each other – but it slows the show down so much. It doesn’t help that the Klingon-language dialogue is delivered in a very slow, stilted manner, and sounds more like a GCSE student trying to speak German than a natural language. The old series had all the aliens speaking in English, the odd Qapla’ or petaQ aside. It was generally explained away as a side-effect of the “Universal Translator” and was one of those quirks of the show that you just accept. 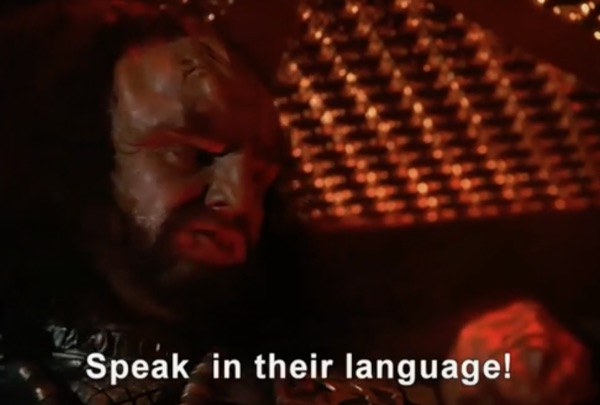 I feel they could have made more of an effort to fit in with the established continuity of the series. Discovery is set 10 years before the original Star Trek series, but the show doesn’t quite fit in with what has gone before. Obviously there needs to be some dramatic licence taken here – it would look silly if everywhere had the cheap looking grey sets of now fifty years old original show. It feels wrong to this continuity-obsessed nerd that USS Discovery seems to have more advanced tech than USS Voyager, launched a century later. There are occasional nods to previous franchises (such as sound effects obviously reused from earlier series) which are pleasing, so it’s not all bad.

The show certainly takes a different approach to introducing its characters. The first two episodes revolve entirely around Commander Burnham, establishing her backstory. Nobody told the writers about the “show, not tell” rule – the first two episodes seem to be about 60% exposition. It’s not until episode three that the titular USS Discovery actually appears. I listened to the Star Trek podcast The Greatest Generation discussing the DS9 pilot, and they pointed out that episode manages to establish the protagnoist’s backstory in less than five minutes. Discovery takes nearly two hours.

Let’s also look at the central premise of the early episodes. The ship is powered by a “Spore Drive”, allowing it to “jump” from place to place using spores harvested from mushrooms (yes, I know). However, the ship’s computer cannot navigate using this system – the only way to pilot the ship is by using a “tardigrade”, a space-faring creature which the crew capture and plug into the drive. Yes, they effectively capture and torture a living creature, and it feels wrong to see the “good guys” do this. It’s not the first time Trek has depicted the rules being broken in a desperate situation – Enterprise featured an episode where the crew – adrift in deep space thanks to a damaged engine – effectively commit an act of piracy to steal a replacement part to complete their mission.

One other issue I have is that no-one on the crew seems to really like each other. It would certainly be a bad idea to go back to the idealised universe of early TNG, where Gene Roddenberry decreed that 24th century humans had evolved past petty squabbles and arguments. I have no doubt that the darker tone is deliberate, the idea (I think) being that the crew has been thrown into a difficult situation, fighting a war that a team of mostly scientists are ill-prepared for, and tempers are getting frayed as a result. However, watching Chief Engineer Stamets and Captain Lorca trade insults with each other every time they were in the same room got tiresome very quickly.

I’d also love to see a bit more humour in the series. I don’t want the show to turn into Red Dwarf, but most previous series offered plenty in the way of witty dialogue. Everyone is so serious on board Discovery.

I have issues with Captain Lorca’s character, but Jason Isaacs is great, acting everyone else off the screen wherever he appears. Sonequa Martin-Green as Burnham and Anthony Rapp as Stamets are also wonderful to watch.

It’s great to see a same-sex couple in a Trek series at long last. The previous incarnations of the show refused to touch on the subject – forgivable in 1966, perhaps understandable in 1987, but not acceptable in 2005. It’s good to see . As Paul Cornell pointed out in his essay Metaphor and Trek, way back in 1995: “It’s difficult to say that there should be a gay character in, say, The X-Files, because that’s just a show about some particular people, but when a series sells itself as the liberal hope for the future of a whole culture, then it becomes hard to say that there shouldn’t.”

It’s also rather wonderful to see Star Trek on the cover of Attitude magazine: 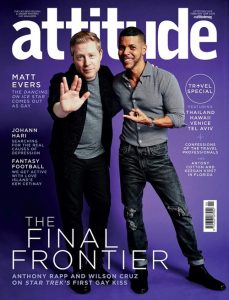 There’s a heavy focus on the Klingon war, which means the show gets just as grim (if not grimmer) than the darkest Dominion War episodes of Deep Space Nine. But when the show backs away from the madness and war and death, there are some good ideas present. The episode Magic to Make the Sanest Man Go Mad is a fun piece of science fiction with echoes of past TNG episodes. Si Vis Pacem, Para Bellum has some excellent character moments.

At some point I’m going to have to accept that Picard and Co aren’t coming back for season 8 of TNG. Can Discovery live up to its illustrious predecessors? I’m not sure, but I’m staying on board for now.