Farewell, Internet Explorer, which officially retired today. It has already vanished from Windows 11, Microsoft’s latest and greatest operating system. Over the next few months, Microsoft is rolling out updates to Windows 10 which will encourage those few people still clicking on the big blue ‘e’ icon to switch to using Microsoft’s new browser, Edge. 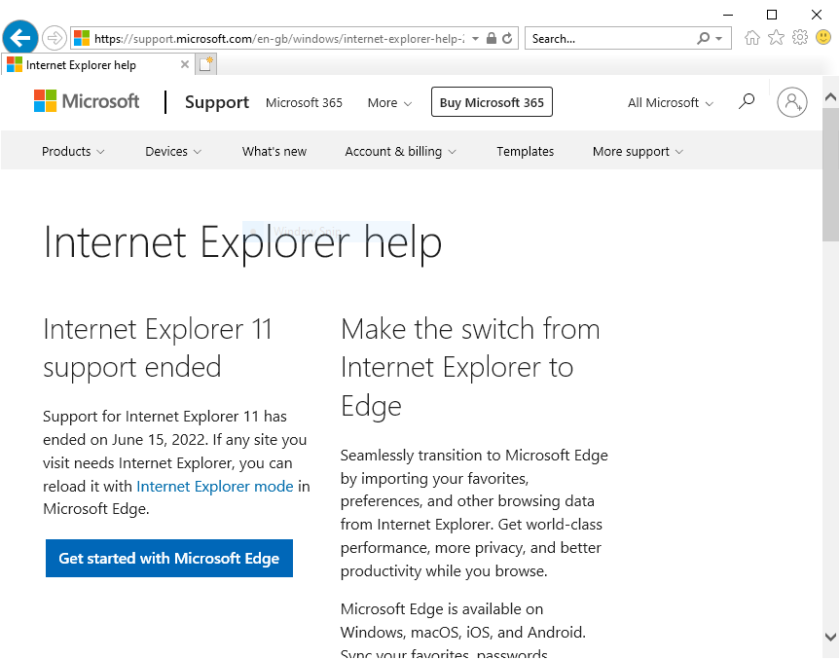 It’s all a long way from Internet Explorer’s heyday. IE launched in 1995 when the Web was a very different place – accessed through slow dial-up modem connections, still largely text-only, and mainly the preserve of tech geeks and Star Trek fans. The main web browser for PC users at the time was Netscape Navigator, which had been released in late 1994.

Microsoft were slightly slow to recognise the internet’s potential, but that all changed with Bill Gates’s “Internet Tidal Wave” memo in May 1995, which set out a plan to get Microsoft online and overtake its rivals on the Information Superhighway. Internet Explorer 1.0 was released in August that year, after Microsoft licensed the code from another software company, Spyglass Inc, in order to get a product shipped as quickly as possible (the credit for Spyglass Mosaic remained in IE for years, until version 7).

Microsoft were aggressive, making IE available for free, forcing Netscape to do the same for their browser. Later, Internet Explorer was bundled with Windows starting with version 4, and could not be uninstalled, with Microsoft claiming it was an integral operating system component. The strategy worked, and by 2001 Microsoft’s main competitor, Netscape Navigator, had been virtually wiped out.

For a time, IE was even the default browser for MacOS, a decision which proved popular with the Apple faithful when Steve Jobs announced it in 1998.

Having won the “browser wars”, Microsoft got complacent. Internet Explorer 6 shipped with Windows XP in September 2001, and then things stagnated. It would be five years before another major update came along in the shape of Internet Explorer 7. Compare with the situation now, where new versions of Chrome, Edge and Firefox are pushed out on a monthly basis.

For me, Internet Explorer was a pain in the arse. I got internet access in 1997 and for the first five years exclusively used an Acorn Risc PC to connect. When browsing the web, the preponderance of websites with that “Best viewed in Internet Explorer” icon caused endless amounts of frustration, especially when said site refused to even load on any other browser. Putting an “ANT Fresco Friendly” logo on my own website did not do much to redress the balance.

Microsoft’s dominance was not to last, however. Having finally surrendered in the browser wars, Netscape released the source code to their browser, and from the ashes of Netscape Navigator rose a new browser, Firefox. Perhaps thanks to frustration with Microsoft’s lack of IE updates, Firefox quickly gained a following. Stats on browser usage share are difficult to calculate exactly, but Firefox had 20% of the market by 2009.

Then, a new entrant steamrollered its way onto the scene. Google Chrome 1.0 came out in December 2008, and quickly rose to a dominant position in the web browser market. This was arguably thanks to aggressive techniques similar to those that Microsoft employed a decade earlier, including covering Google’s websites with “recommendations” to use Chrome when accessed with rival browsers. Thus began the second browser war, between IE, Firefox, Chrome, Apple Safari, and Opera bringing up the rear. Microsoft’s browser suddenly looked rather out-of-date when compared to these upstarts.

Meanwhile, the way people accessed the web was changing. Mobile web browsers had been a niche product for many years, but in 2007, the launch of the iPhone was a game-changer, opening up the mobile web to a much wider audience. Suddenly the notion of competing desktop web browsers seemed almost passé, as webmasters fell over themselves to support Safari on a tiny 3.5-inch screen. The launch of Android a few years later cemented Chrome’s position in the world of the world wide web, and “Mobile First” web design became the new buzzword.

Microsoft attempted to modernise its browser, culminating in its “Modern.IE” campaign for Internet Explorer 11 back in 2013, but the world had moved on and it never really made an impression.

Which brings us to the present day. Internet Explorer’s market share is measured in fractions of a percent, and it ceased being the default Windows browser with the release of Windows 10 in 2015. Even before that, the oft-quoted joke on the internet was that IE should be renamed “Chrome Downloader”, as that was the only thing many users ever did with it.

IE will live on, kind of. If you encounter a website from the era of the dotcom bubble and Hear’Say, you can open it in “IE mode”, which will lovingly render sites in that clunky, slightly broken way that your old Windows XP machine used to. Many of the internal programmer’s interfaces in Windows that exist to support IE will stick around for a while too, to maintain backwards compatibility with software that uses them. But the iconic icon itself will disappear from desktops.

The final irony: IE’s successor, Edge is now based on Chromium, the same browser engine that powers Chrome. It seems that Google decisively won the second browser war.

PS this site is best viewed with Firefox.