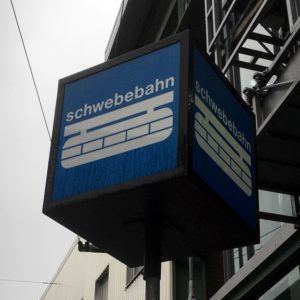 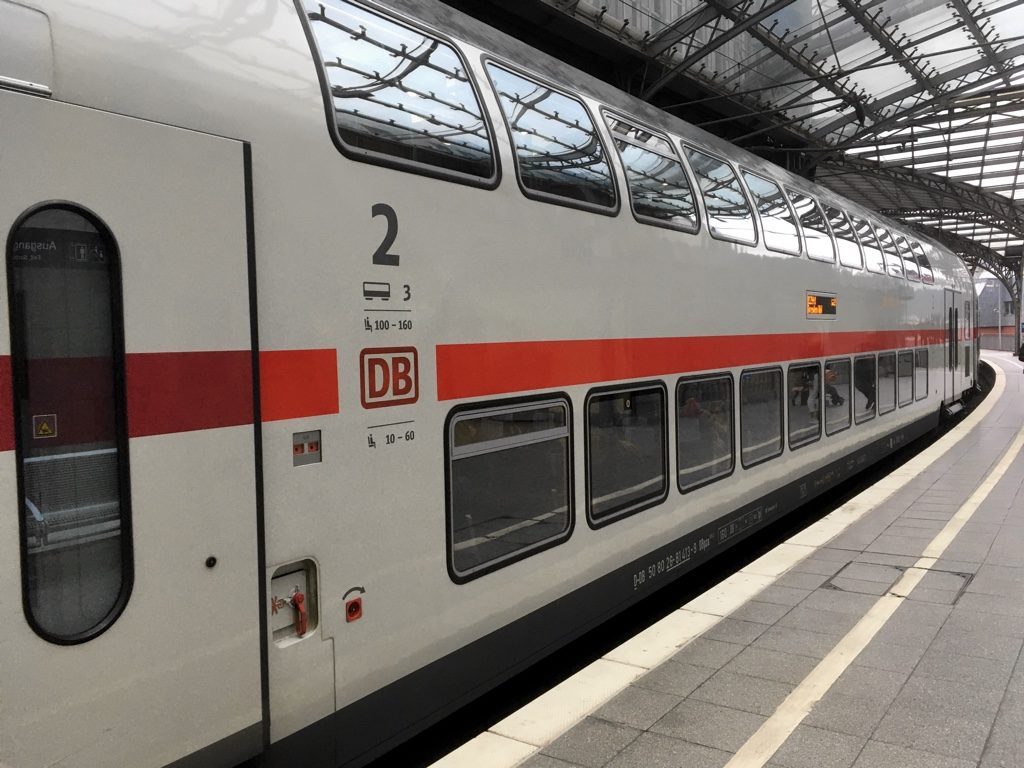 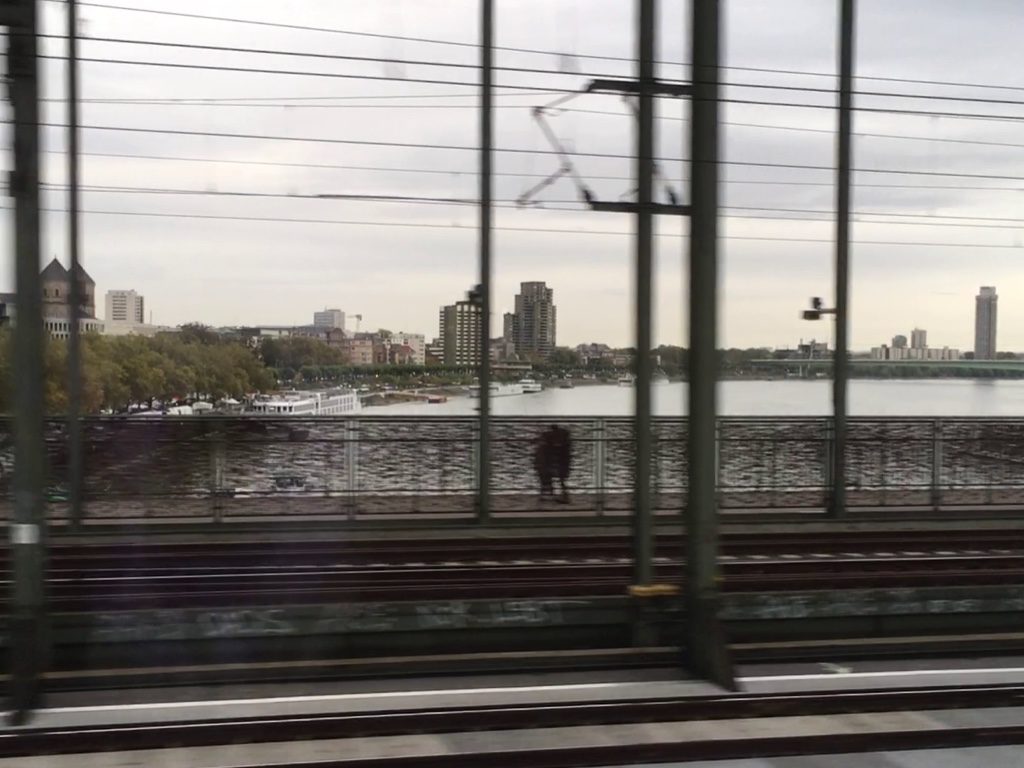 Why were we going to Wuppertal? A sign that greeted us in the station concourse gave a clue. Just a couple of minutes walk away from the railway station is Hauptbahnhof (Döppersberg) station, the central station on the Wuppertal Schwebebahn. 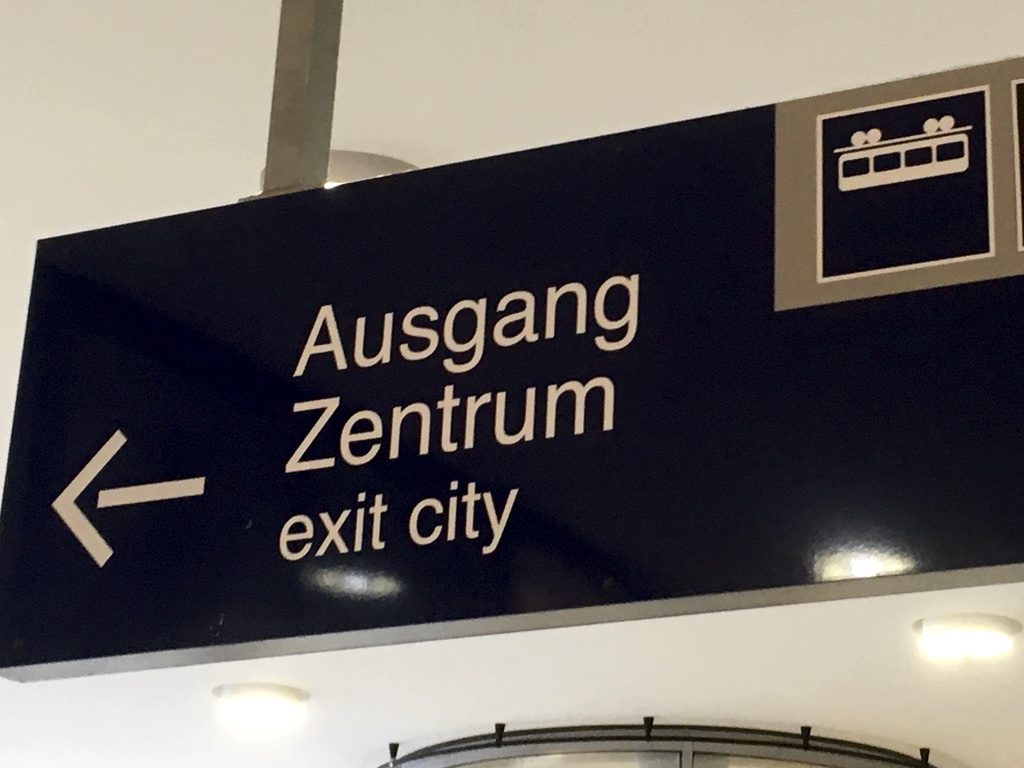 Wuppertal is a linear settlement following the contours of the Wupper valley quite closely. Space is at a premium in the city, and at the start of the 20th century, the city authorities decided on an innovative way to install a transport system – the Suspension Railway. 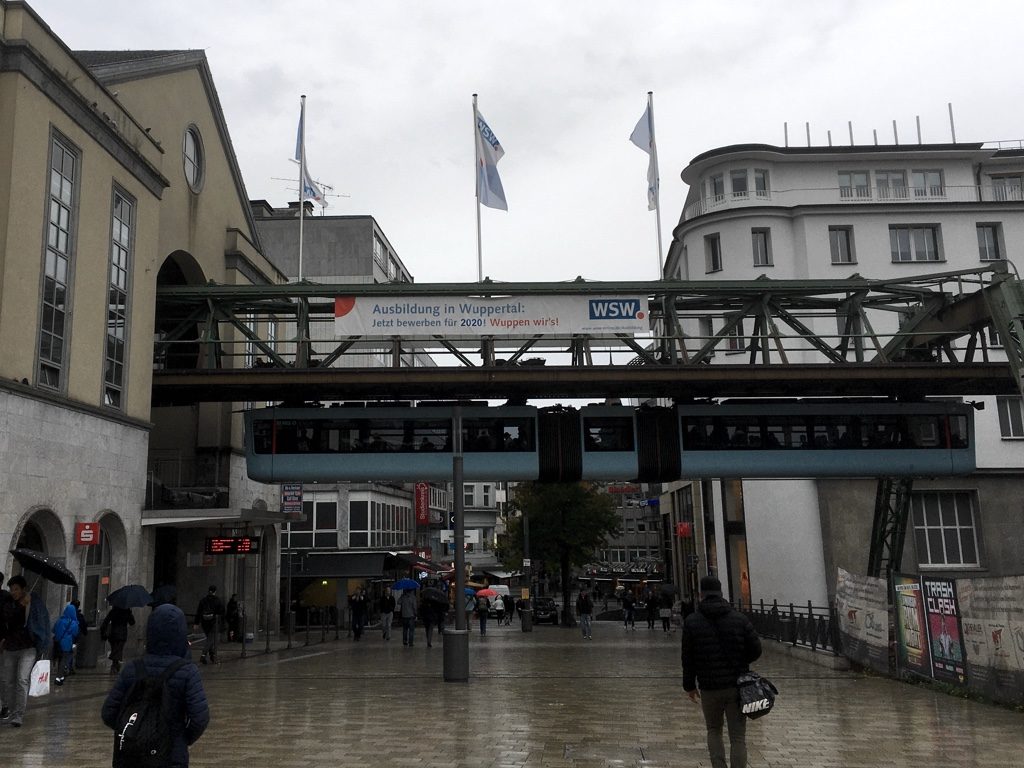 Unlike a traditional elevated railway such as Chicago’s “L” or Liverpool’s erstwhile Overhead Railway, the Schwebebahn is a monorail, with the train carriages hanging down under the track. The system is electrically powered, with trains picking up electricity from a… well, I kept saying 3rd rail, but I guess it’s a 2nd rail, really. 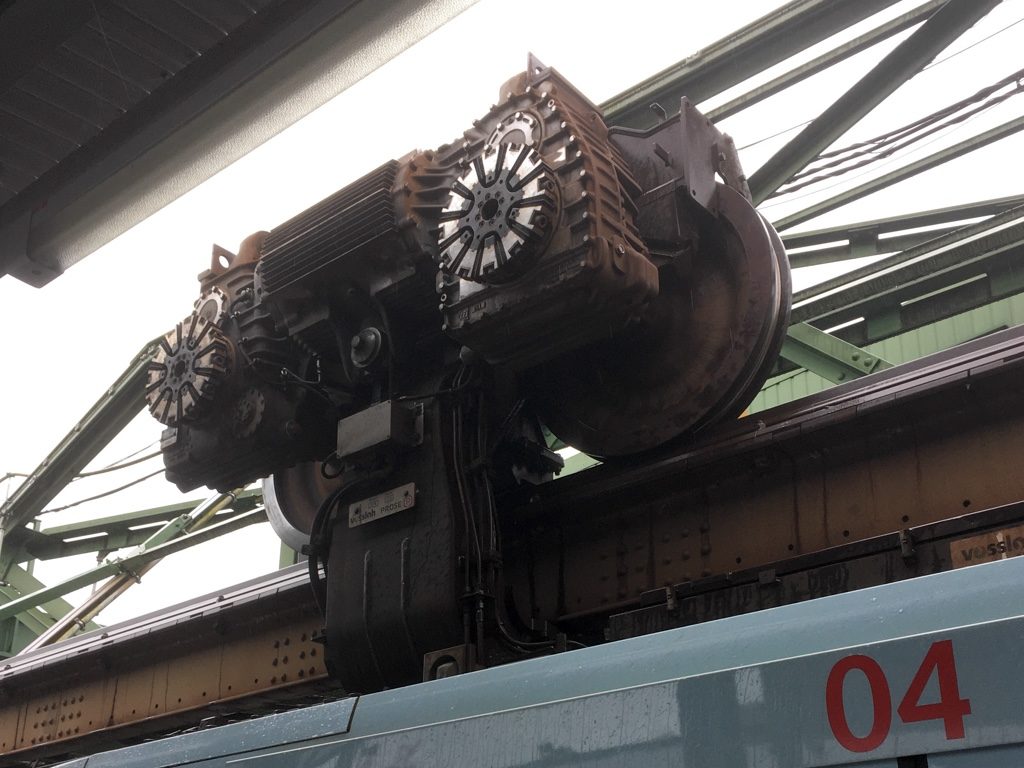 It’s fair to say we were both squeeing with excitement even before we entered the station. Our plan was simple. We would ride the train to one terminus, then to the other, before returning to our starting point in the city centre. It takes about 30 minutes from one end of the line to the other, so we would have ample time to explore the system before returning to the Hauptbahnhof for our booked train at 13.16.

At the station ticket machine we encountered a problem that I have encountered several times before in Germany – info about which ticket to buy is hard to come by. Much pressing of buttons later yielded a 24 hour ticket for two people for €10.50, which did seem to match what the Schwebebahn website had told me. 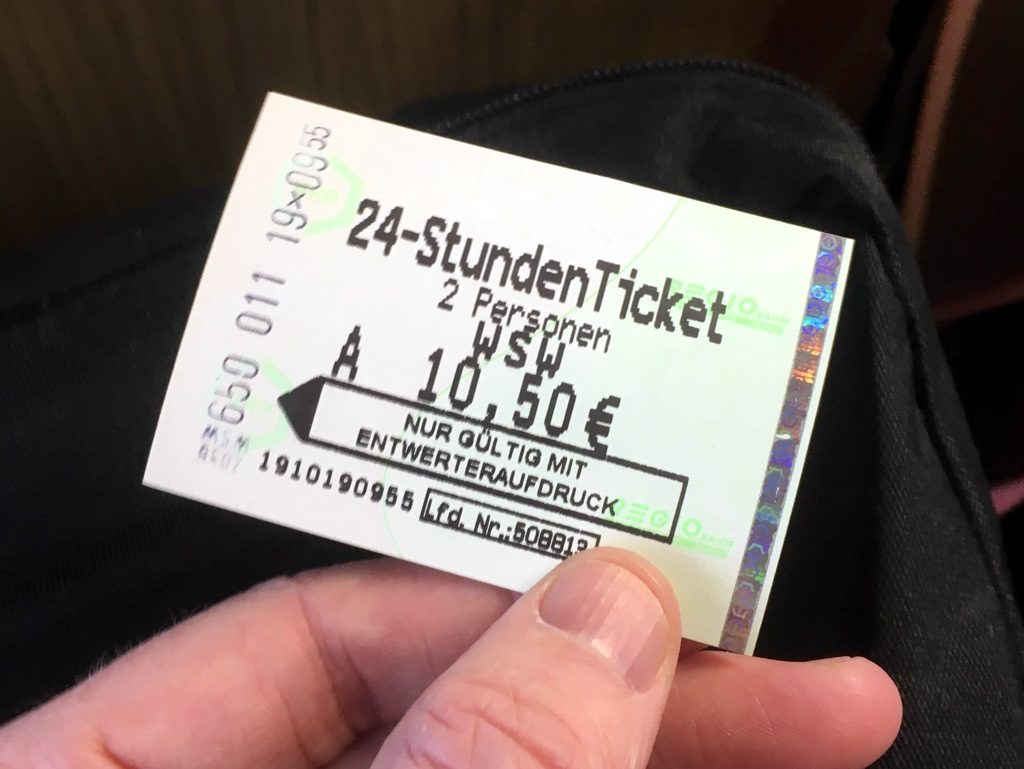 A train arrived, and we climbed aboard. The first thing that struck me – the carriages are narrow, much more so than a normal train, with just two seats per row and an aisle running down the side of the carriage rather than the middle. The second thing: the trains are single-ended, with only one driving cab and doors on one side only. 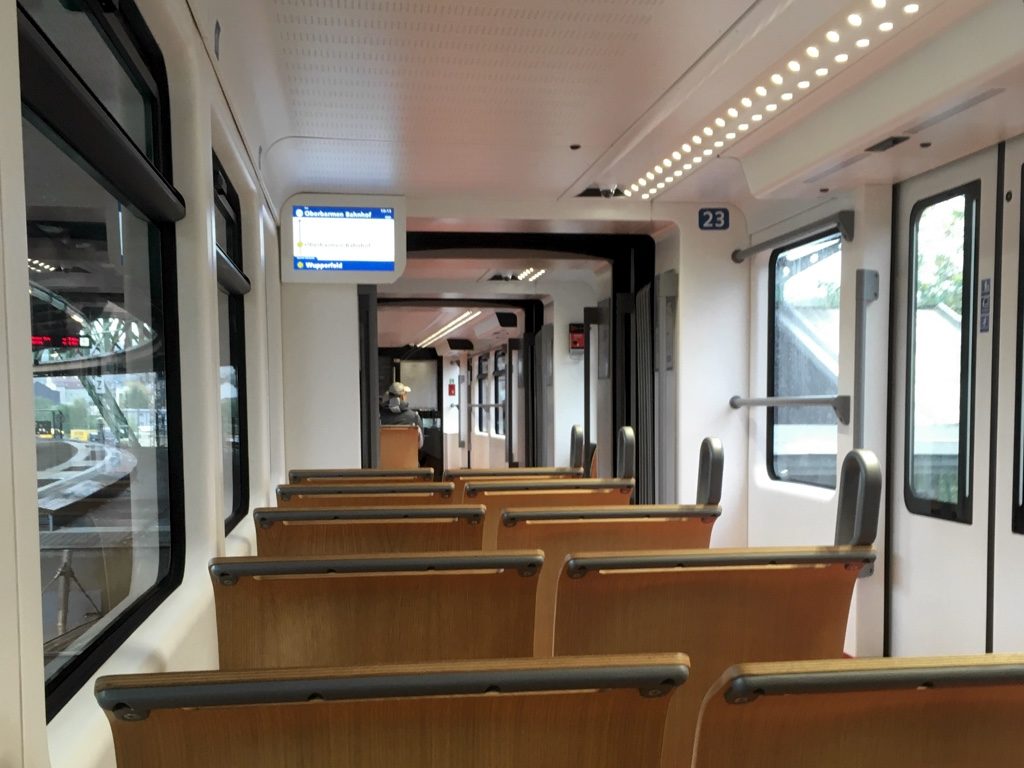 Thirdly, the ride is not exactly smooth – this is century-old technology, after all. The Schwebebahn has been refurbished multiple times (indeed, it only reopened in August after an extended closure for repair works) but the trains still bump and shudder their way along the line.

Fourthly: the trains sway. They swing out to the side slightly on curves thanks to the centrifugal forces at work, which is to be expected. But also, at busy stations, the movement of people getting on and off causes the train to sway back-and-forth slightly relative to the platform, which took some getting used to, although the locals took it in their stride.

Going through my pictures of the Schwebebahn and found this short video I took illustrating how the carriages sway from side to side even when stationary. pic.twitter.com/5QOS0hEb84

For much of the route, the line hangs above the Wupper river, with massive support struts embedded in either bank holding the track up. Many of the stations themselves also straddle the river. This is possibly the most disconcerting part of the trip for the unprepared – you are hanging above a fast flowing river, with literally nothing between the train and the water. You do have to put your faith in that German engineering. I started to wonder what the ride is like during the morning rush hour. 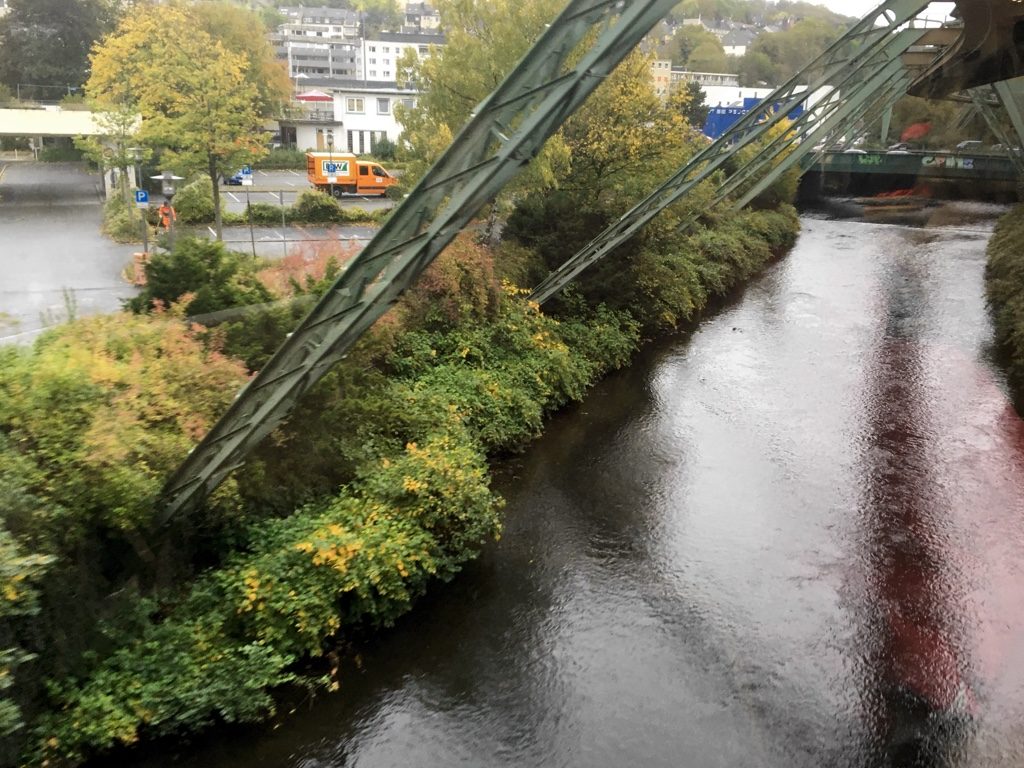 We travelled to the eastern terminus at Oberbarmen, where the train stops to drop off its remaining passengers before proceeding into a very tight loop to turn around, arriving into the opposite platform where it picks up passengers for the return journey west. 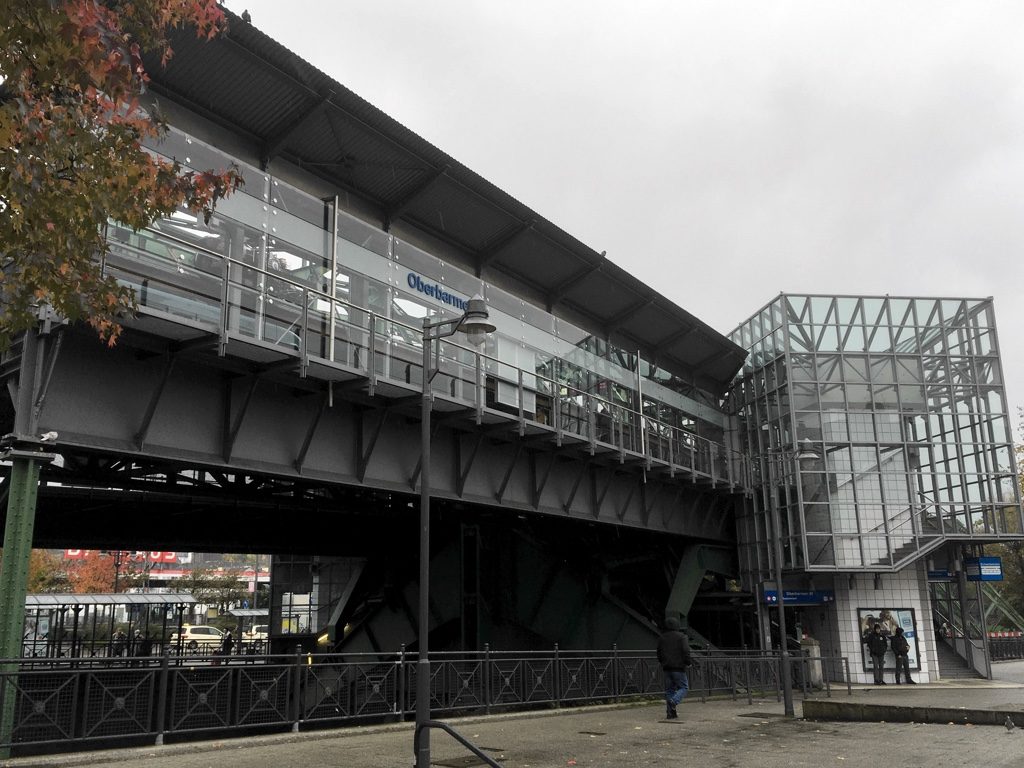 We left the station to get a better look at the infrastructure. The weather was not conducive to an extended loiter outdoors – the rain that morning became torrential at times, but we did get to admire the massive iron supports for the railway above. One can only imagine the feats of engineering necessary to erect these massive structures in the first place. 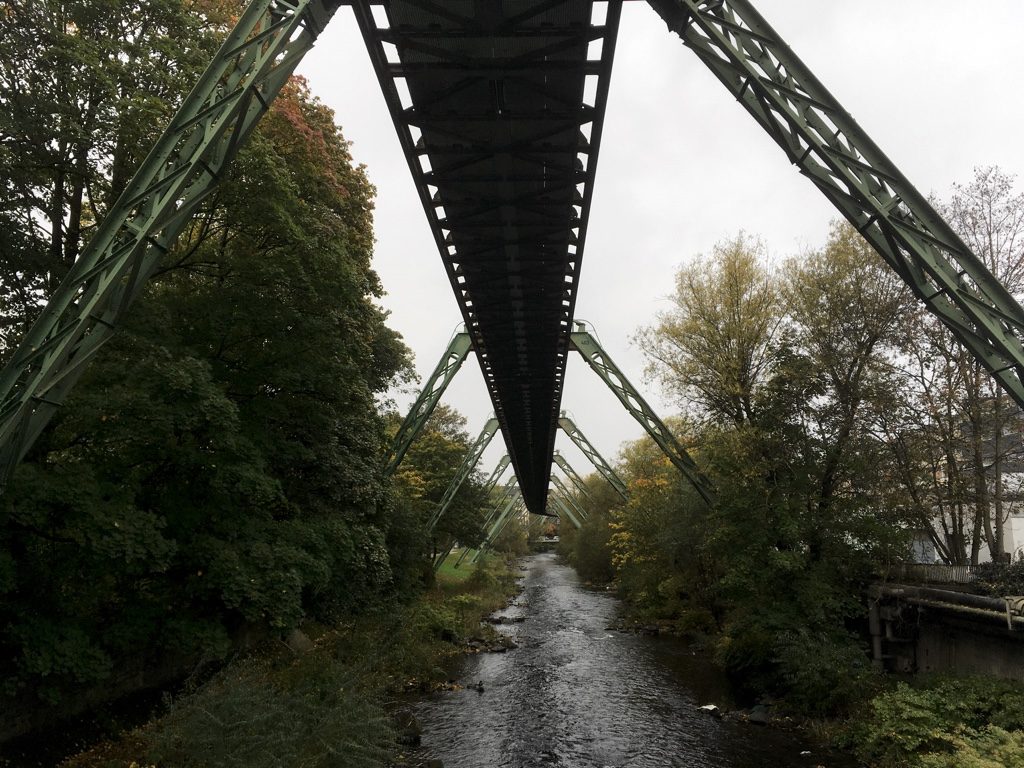 One big advantage of only having a cab at one end is that at the back of the train there is a full view from the rear. Getting on a train back east, we made a beeline for the rearmost seats to get that all important vantage point. Paul was, naturally, thrilled. 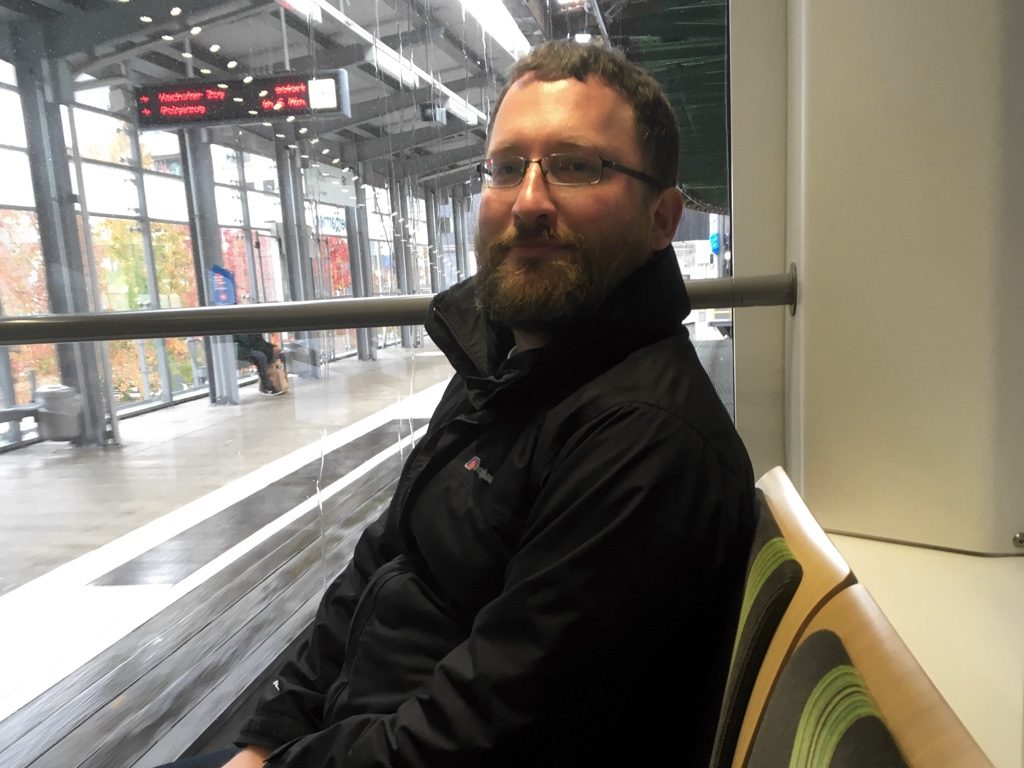 At a subsequent station a family joined with some kids, and they seemed very disappointed that someone else had grabbed those seats. Es tut mir leid, Kinder.

Near the other end of the line, Vohwinkel, the route deviates away from the river and instead hangs over a road. Sitting at the very back of the train, we had a clear view out of the rear window, and it was strange to see cars and vans appearing and disappearing directly underneath us. There have, apparently, been a couple of incidents on this stretch of line, where people using cranes or cherry pickers have been a bit careless and accidentally got in the way of trains. 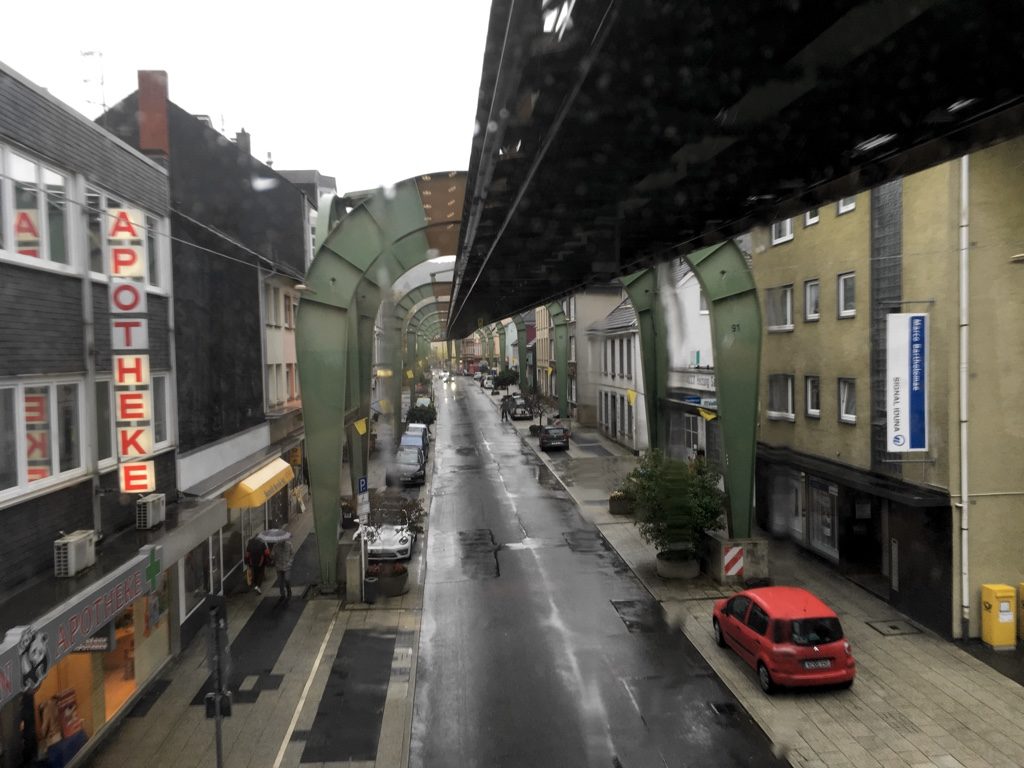 Vohwinkel is also the location of the main depot for the system. Unfortunately it was all closed off with nothing really visible from outside. I was hoping to catch a glimpse of the Kaiserwagen, a preserved train dating back to the system’s opening, which once carried Kaiser Wilhelm II on a tour of Wuppertal, and is now available for private hire.

On the way back from Vohwinkel, we alighted at Zoo-Stadium station (one hopes those are two separate attractions, and they don’t make animals fight for our entertainment). Paul had spotted that at this point the Schwebebahn passes underneath the main railway line, and the opportunity for a photo of the two forms of transport together was too good to pass up. We did wait a while for the money shot of the Schwebebahn and a regular train together, but were unsuccessful. 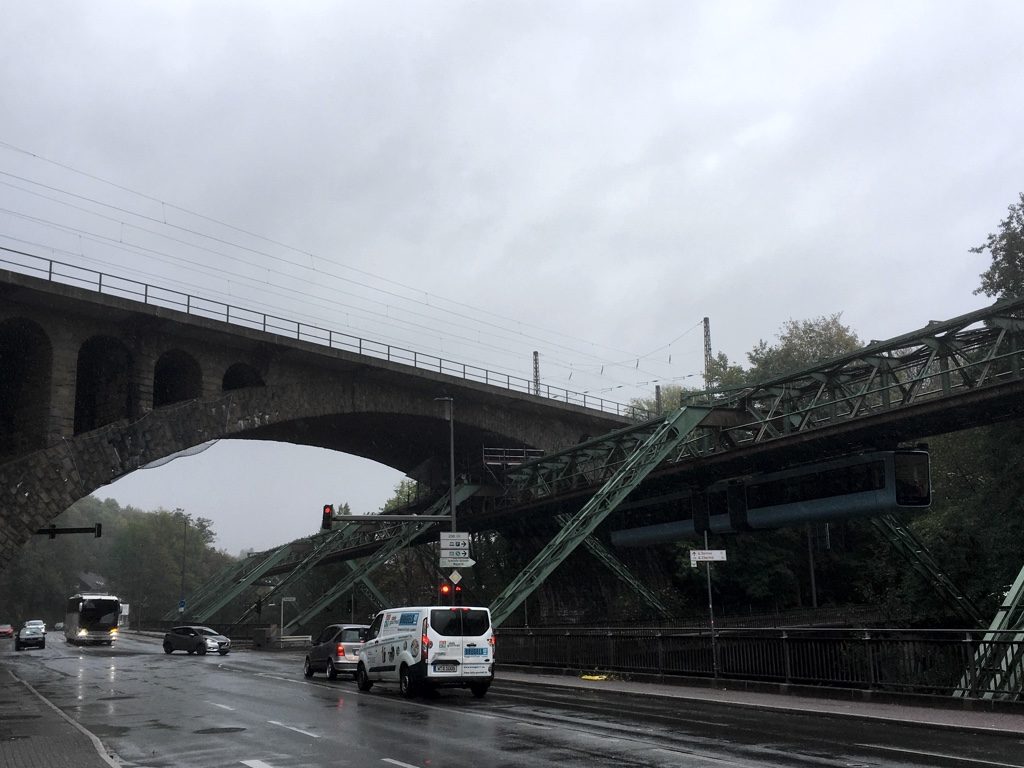 I did shoot a few minutes of video of the Schwebebahn during the day. I’m not going to pretend it’s the most scintillating footage ever produced, but I have put it on YouTube for your entertainment.

Back in Wuppertal town centre itself, there was just time for a quick look around. We walked through a square where some pleasing smells wafted from food stalls. It was only the fear of making a tit of myself with my limited German that stopped me going up to one and ordering a plateful of Currywurst. 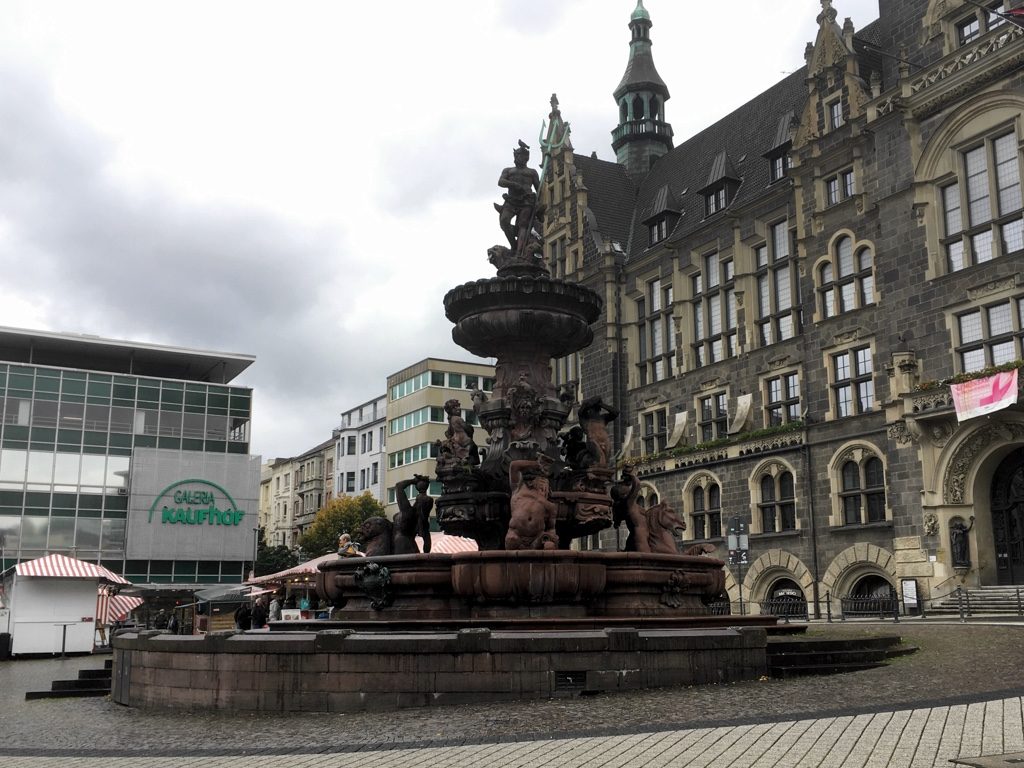 Doing extensive research (OK, I looked on Wikipedia) I see that Wuppertal’s other main claim to fame is that this is where Aspirin was invented. So they cured transport headaches and actual headaches here. 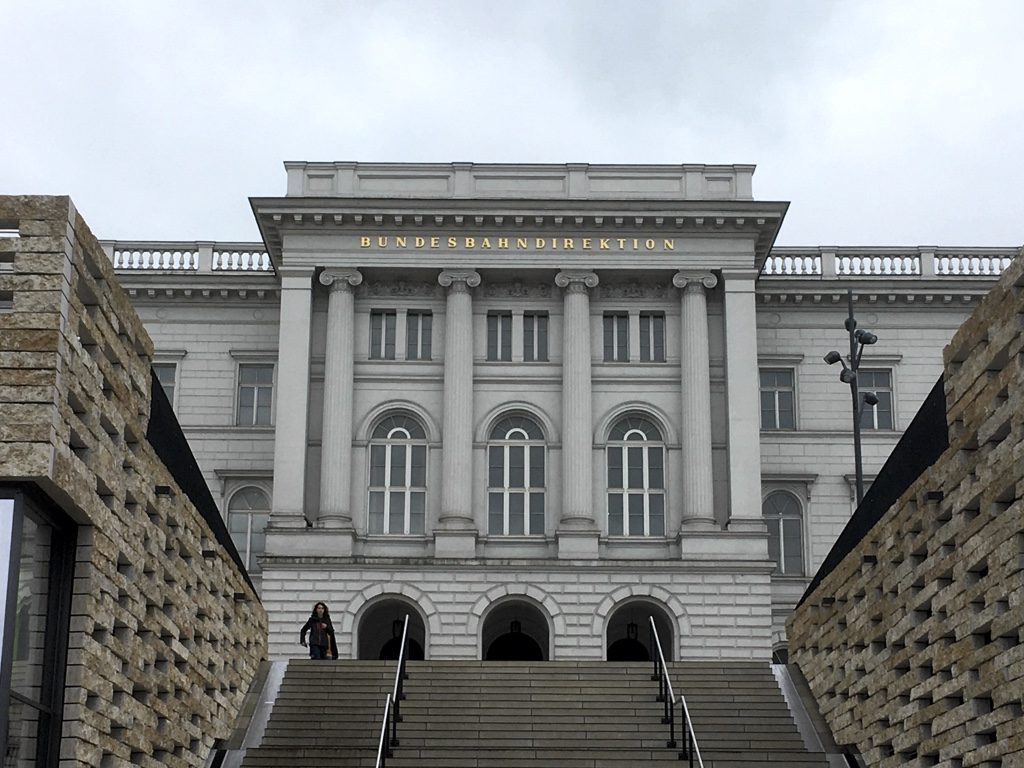 I was happy to head back to the station for some lunch. Paul, however, had another plan in mind. He found the city tourist information centre, where there are numerous Schwebebahn souvenirs on offer. You could take your pick from H0-scale models (although where you would find track to run them on is another matter) and books, but he went straight for the cutest option available: Schwuppi the Schwebebahn stuffed toy. 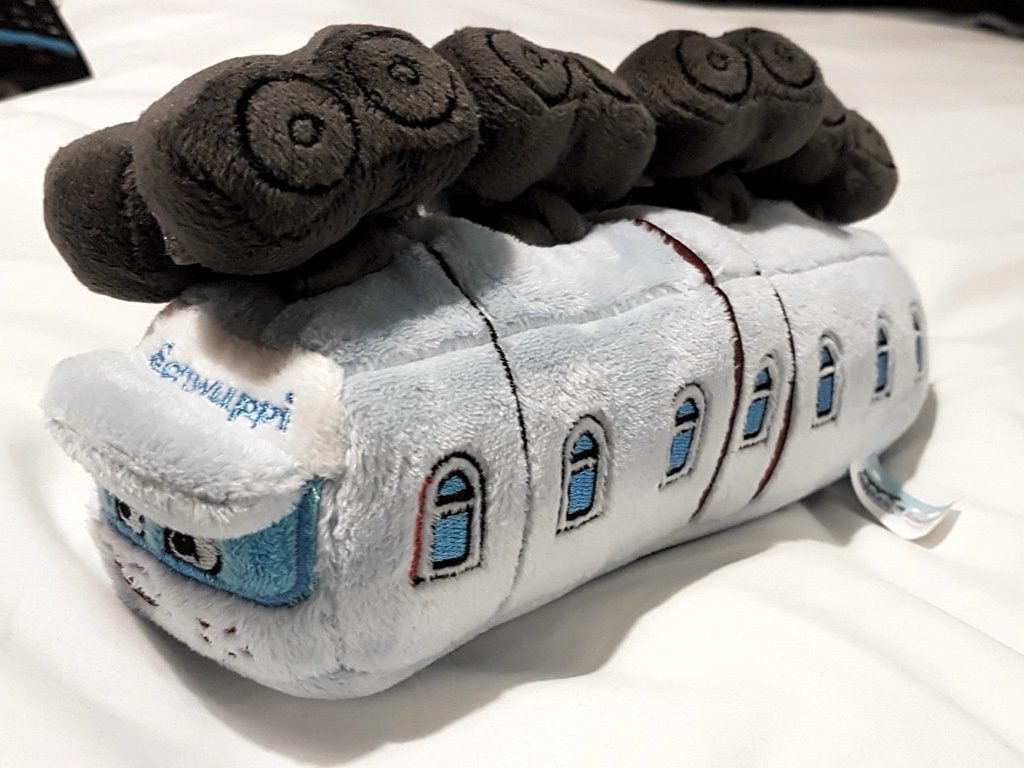 He claimed it was for his nephew, but I am sceptical.

With that, it was back to Wuppertal Hauptbahnhof, where we visited the Asia Hung restaurant for a quick noodle box to keep us sustained. 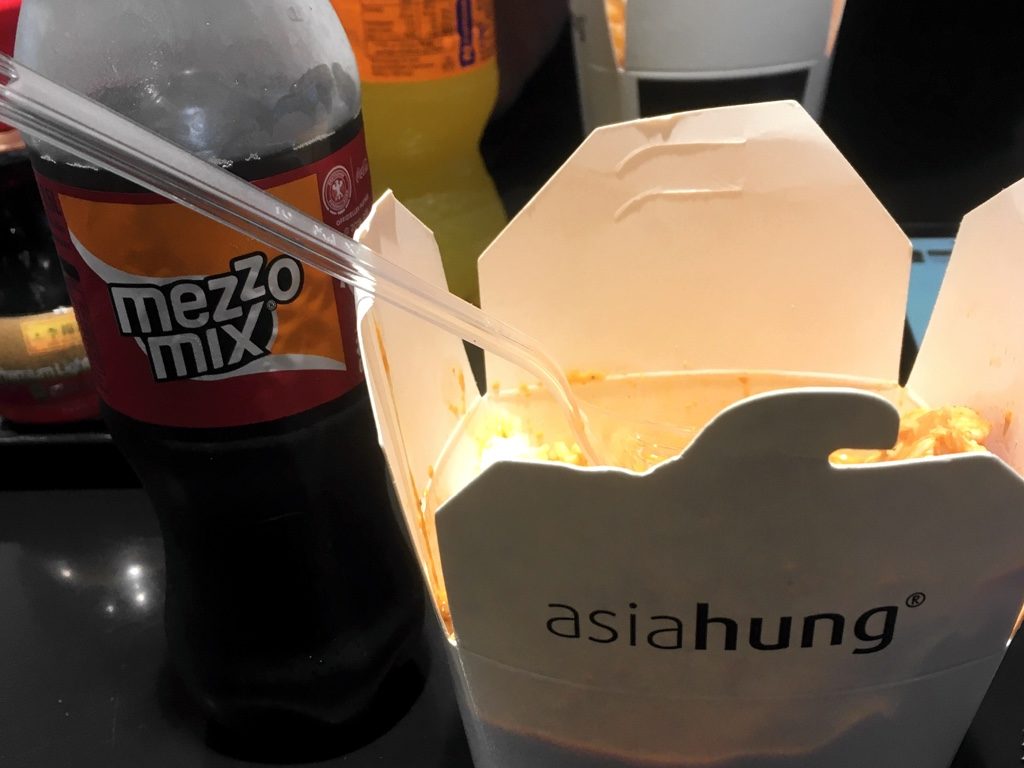 I definitely recommend a trip on the Schwebebahn for anyone who is a rail enthusiast, or just likes visiting slightly quirky, unusual places. Wuppertal is less than 45 minutes away from Cologne by train, so it is an easy day trip if you are in that area.

For us, however, it was time to move on to the next stop on the Train Ferry Tour. Another ICE rolled in to take us to Hannover, for an onward connection to Hamburg. 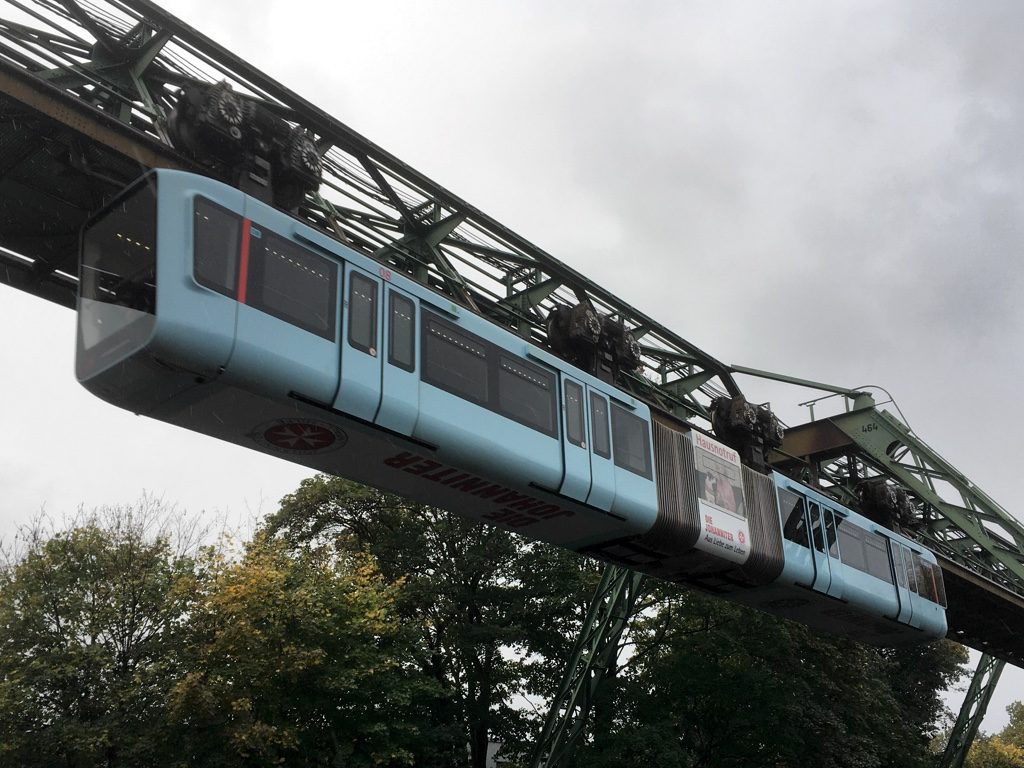 One thought on “Suspended until further notice (#TågFärjetur part 3)”