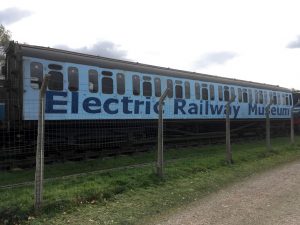 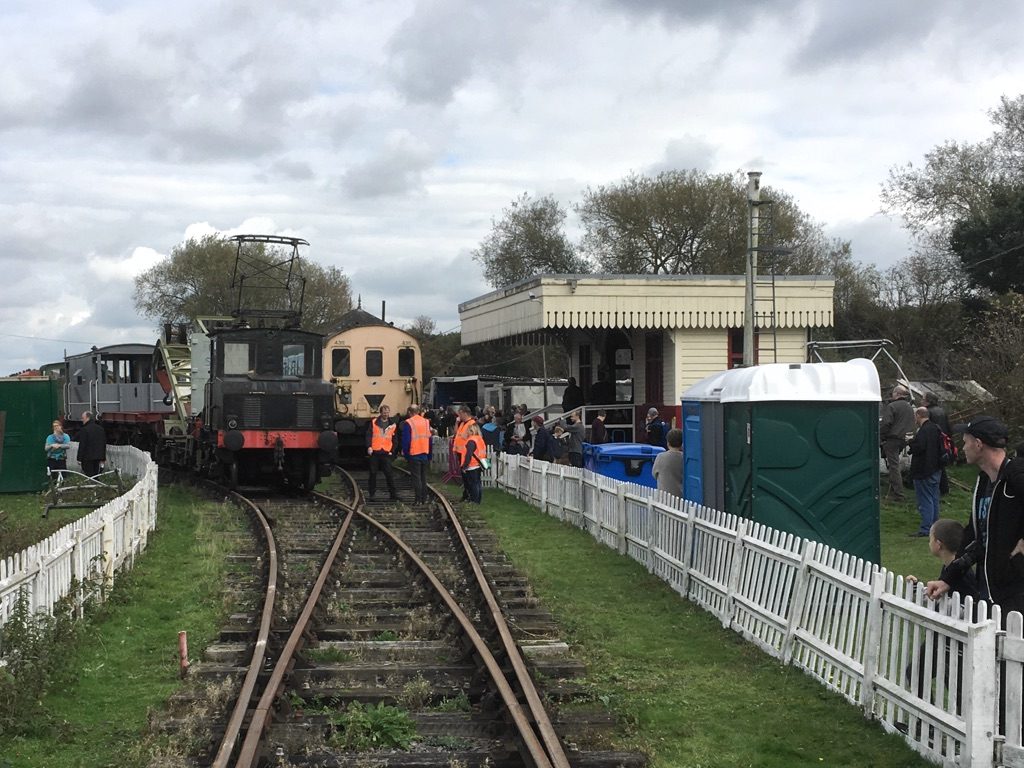 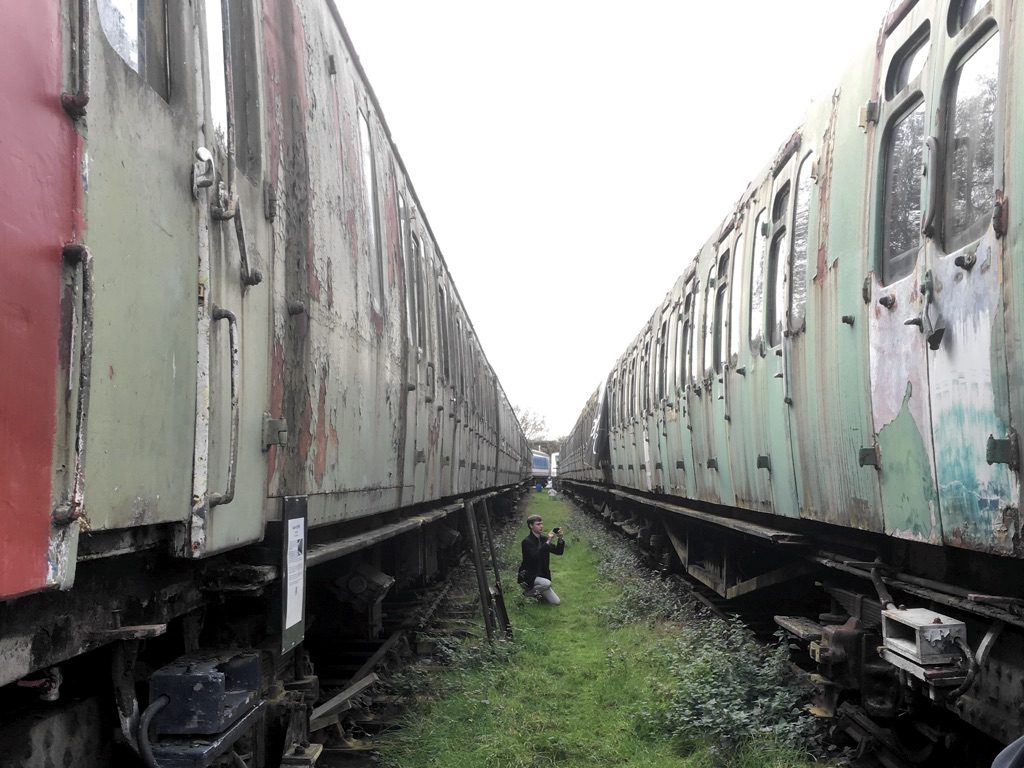 The Electric Railway Museum has struggled for a while with a lack of resources and a local authority who seemed to be more interested in developing the site for commercial use. It is only open on a handful of days each year, but attempts have been made to create some proper exhibits charting the history of electric railways. All that has to come to an end, however, as the site’s lease has expired and will not be renewed. Thus the collection of historic vehicles is getting split up and moved to other sites around the country. The open day on 8th October was the last chance to see the museum in its present form. 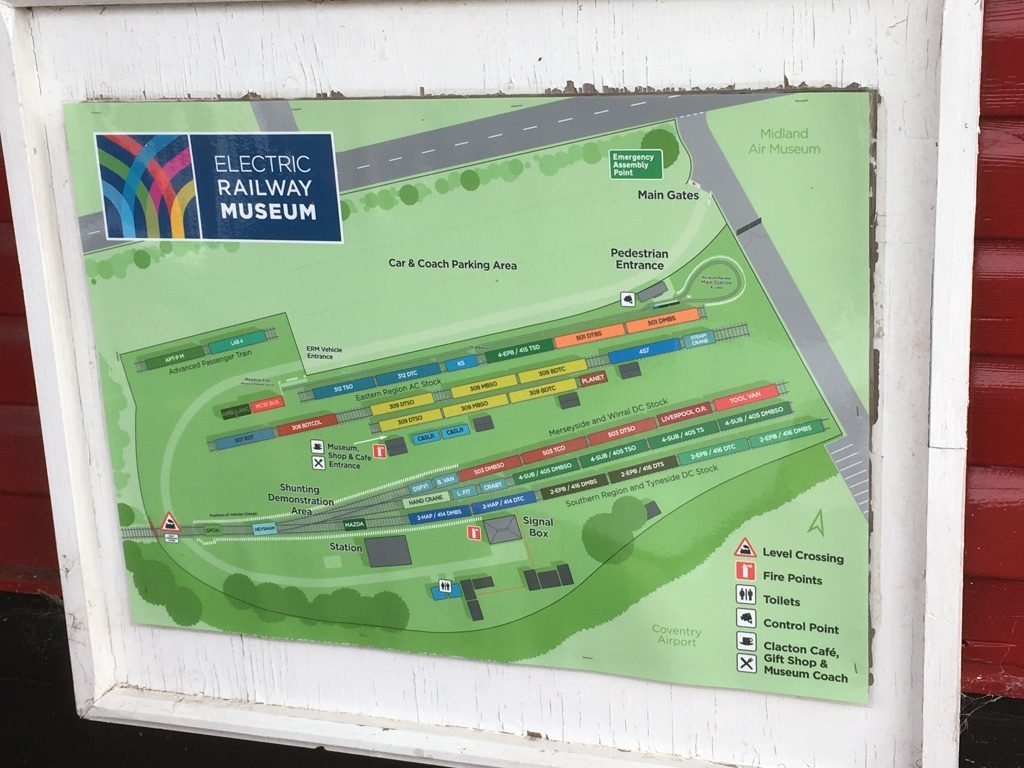 There’s a great variety of rolling stock, including this early electric locomotive, built for shunting duties at Spondon Power Station in 1935. A certain subset of my friends find the word “pantograph” hilarious for some reason, so this photo, showing the pantograph fully raised and extended, is dedicated to them. 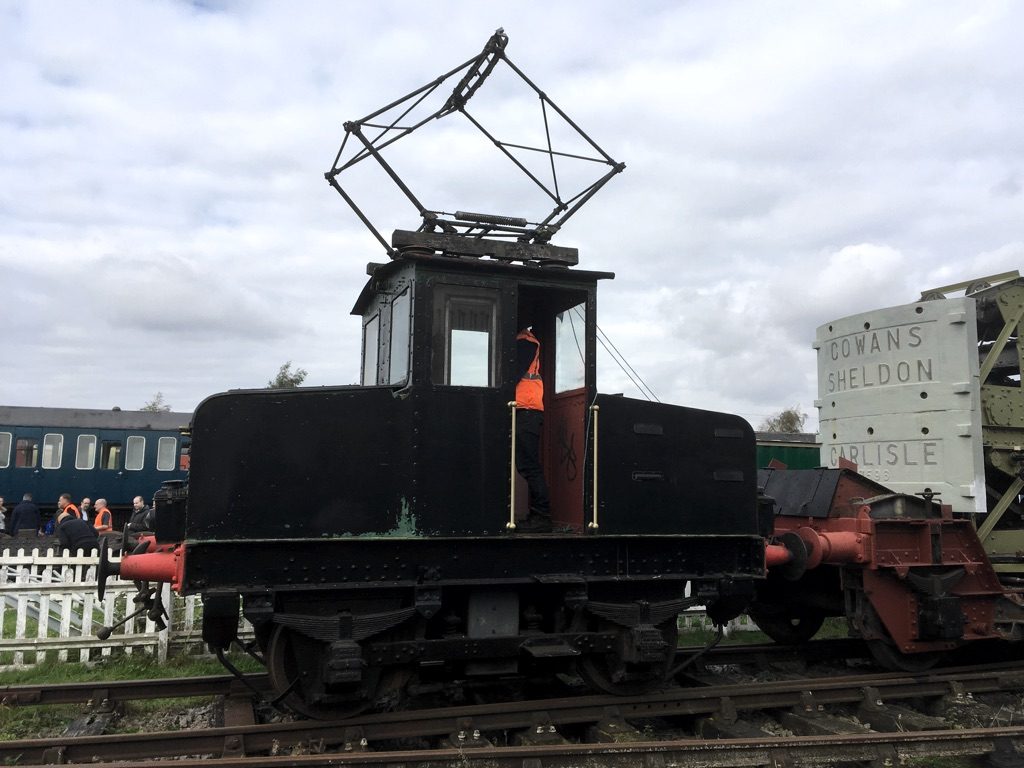 Star attraction was undoubtedly this Network SouthEast coach which had been given a repaint in time for today. It looks surprisingly modern to be sitting in a museum, but it is in fact from a prototype train, the Class 457, which was used to test the equipment in the Networker trains. Having proved the technology, it was withdrawn, having served its purpose. 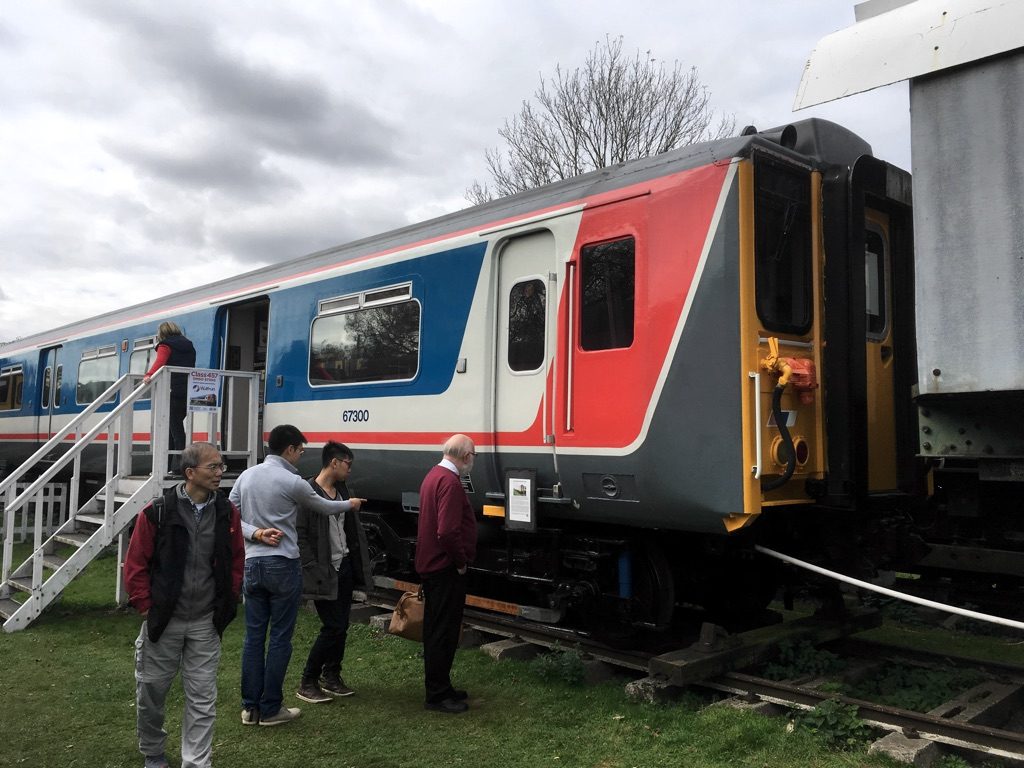 Internally, it’s something of an 80s timewarp, with the original Network SouthEast seat moquette in place, and faded line diagrams still clinging to the internal walls.

Of particular interest to me was the last surviving Class 503 train, which faithfully ran between Liverpool and the Wirral peninsula for many years. They were introduced in 1938, the last ones were withdrawn in 1985 – that’s 47 years. Remember that next time you see someone moaning about Northern Rail’s “ancient” rolling stock. 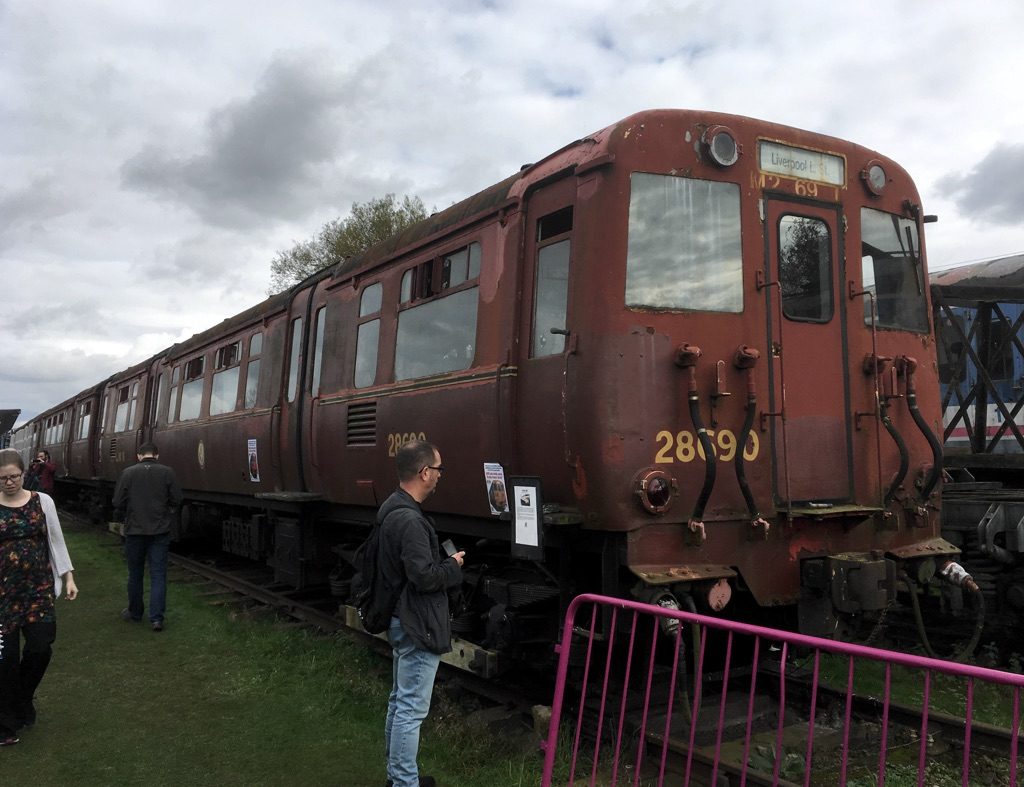 A full 3-car train is here, in need of some restoration work, but substantially complete. The Philistines at Wirral Council wanted to convert it into a café, but fortunately those plans fell by the wayside, and it ended up in the collection of the Suburban Electric Railway Association instead.

In less good condition is this Liverpool Overhead Railway coach, one of only two vehicles from that famous railway still in existence (the other survivor, fully restored, is in the Museum of Liverpool). It was kept at the old Steamport museum in Southport for many years, but since that museum closed it has been rather unloved. It is due to move to a new site in the south of England where hopefully it can get some attention. 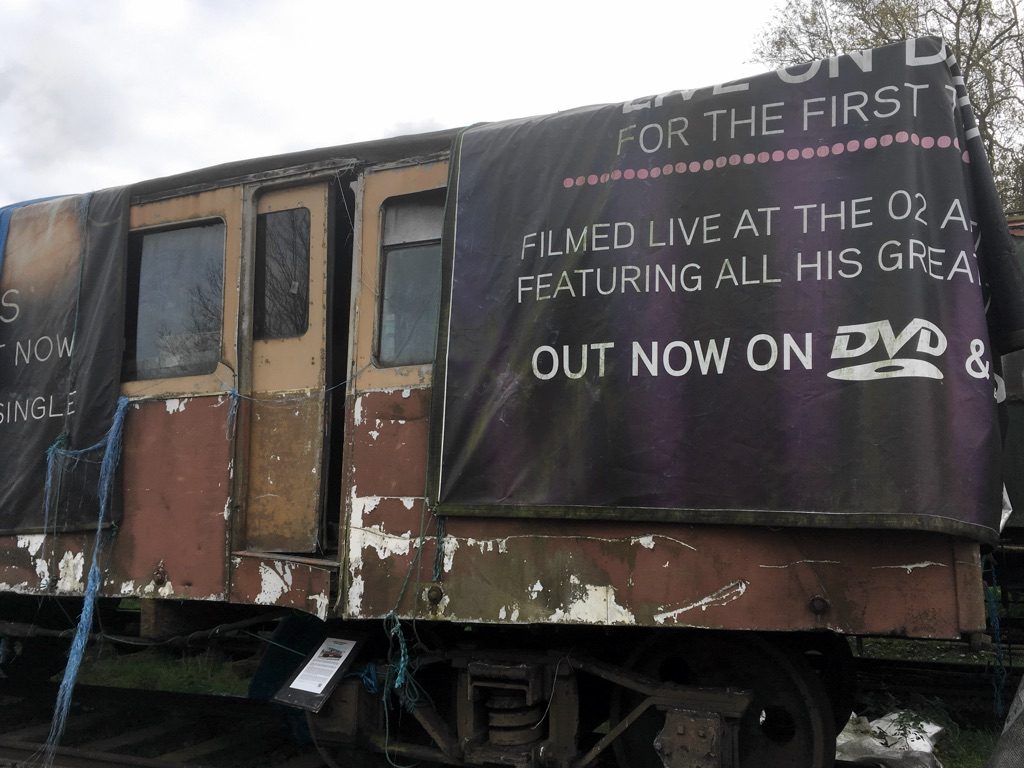 Another vehicle with a Liverpool connection is the vehicle below. For many years it ran on the North London Line in a Class 501 slam door train, but then had a second life running as part of engineering trains on the Merseyrail network, in which guise it continued until 2001. 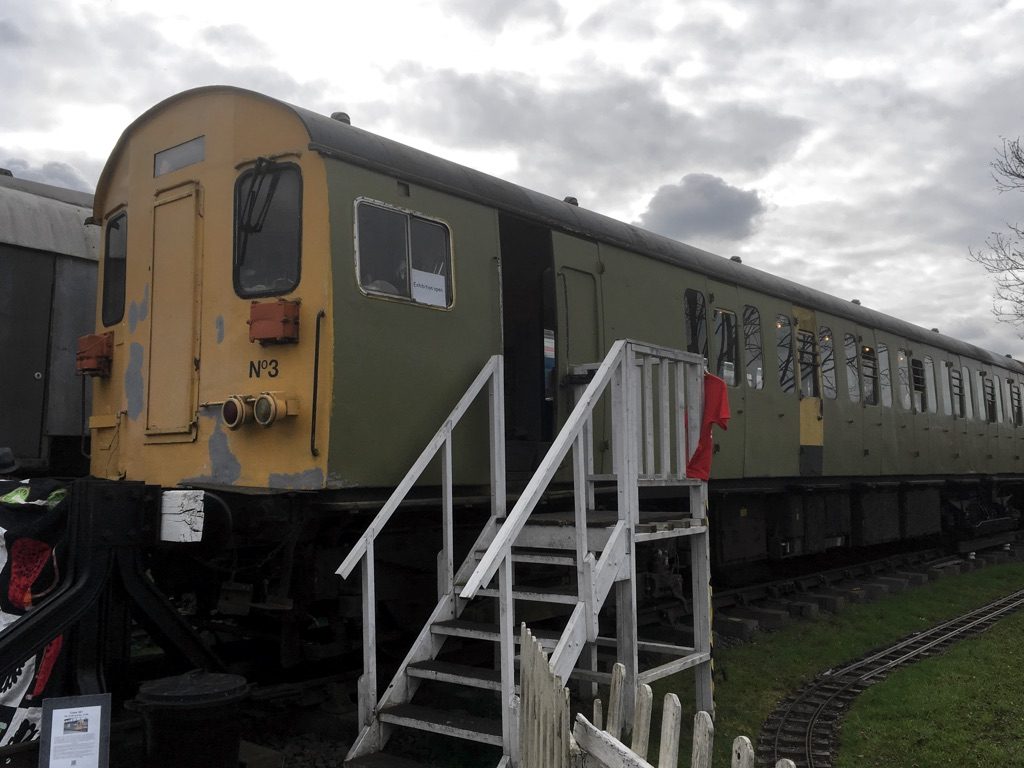 Another unit saved for posterity is this Class 309 train. They were used on the London Liverpool Street to Clacton route, but in the last few years of their lives some units were relocated to the North West where they found use on local services around Manchester for a short time. The vehicles shown here have been pressed into service as a café. 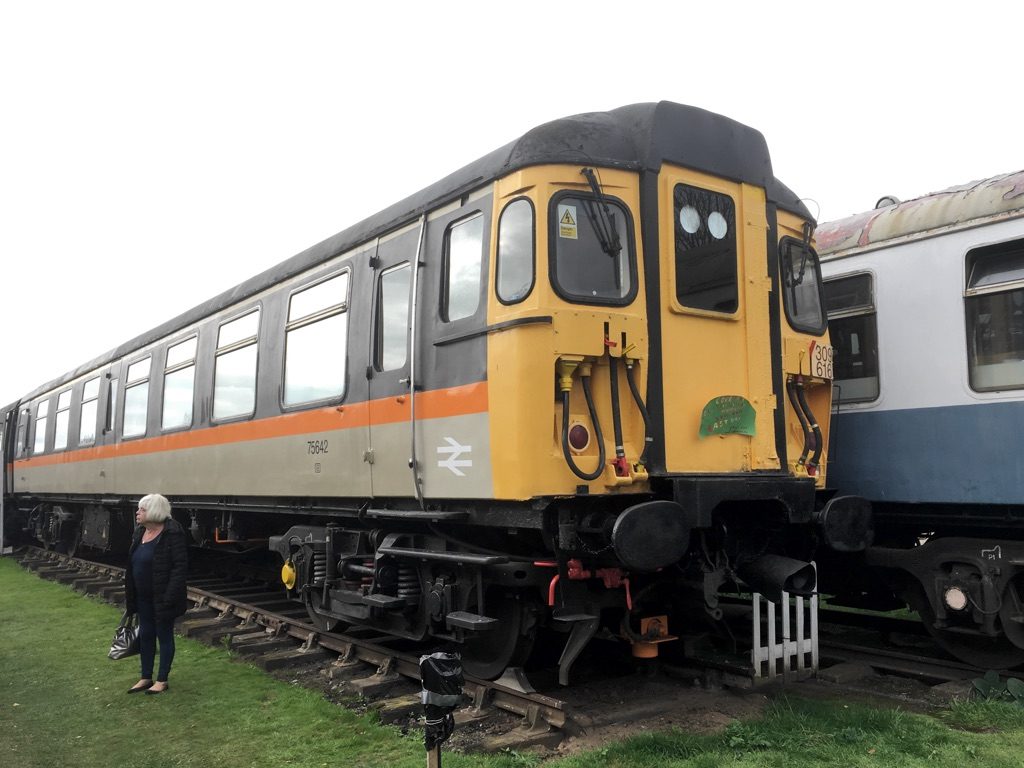 Tucked away in a corner is a power car for the ill-fated InterCity APT, the tilting train which was supposed to propel British Rail into the future but instead was quietly axed after some journalists got queasy on board during the press launch. The power car is part of the National Railway Museum collection but is on extended loan where some limited conservation work has taken place. Inexplicably, it had a bus parked in front of it on the day, preventing good photos. 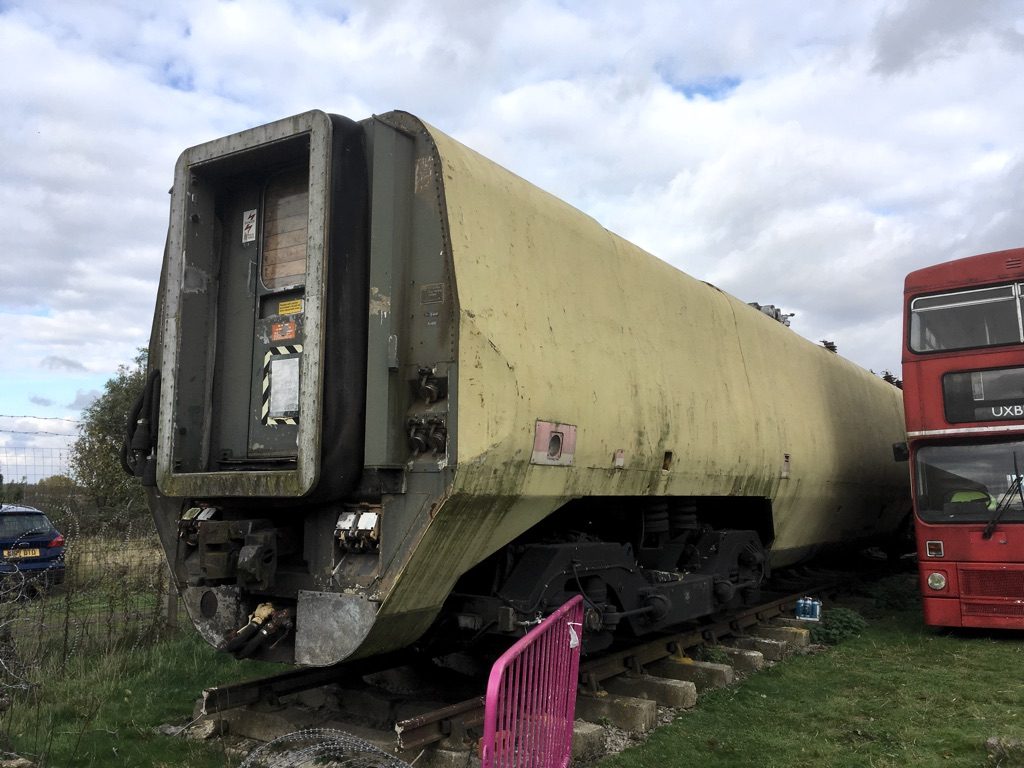 There are some real relics on site in the form of these two City & South London Railway carriages, which date back to 1903 and 1907. They are without wheels, or much of anything else really, but a remarkable throwback to the early days of London’s tube lines.

Speaking of tube trains, one of the other coaches on site houses a collection of retired signalling equipment, formerly used to control train movements on the Victoria Line until it was resignalled a few years ago. You could watch imaginary trains zipping from Brixton to Walthamstow on the signalling panel, with different parts lighting up.

Elsewhere, an added bonus was the beer tent on site selling a variety of real ales, which meant I could enjoy some beer while watching the shunting demonstration. There were also bottles of Third R-Ale beer, specially brewed for the day, available to take away.

Combining two of my favourite things: alcohol and trains.

Much of the collection which was stored here is safe for now, but it did get me thinking. Another generation of electric trains will be coming to the end of their working lives soon. Merseyrail is about to replace its entire fleet. New trains are arriving at Crossrail to replace the old British Rail stock. Some of the class 319 trains withdrawn from Thameslink have found new homes up here in Liverpool, but there’s a whole lot more which have no work lined up. Is there room in the world of railway preservation for these trains? I’d like to think so, but previous experience has shown that is no means guaranteed.

If you would like to visit the Electric Railway Museum… well, you can’t, because it’s closed forever. You can still visit the website to see what you missed.

There is also a JustGiving page to raise funds to move the trains to their new locations.